Some tenants in the tony Hamptons are using New York state’s non-eviction order to squat in luxury while weathering out the coronavirus crisis, local landlords have claimed.

One homeowner, who chose to remain anonymous but identified as middle-class, said that short-term renters are overstaying at his property in Sag Harbor and refusing to pay rent.

‘We’re not talking about poor people,’ he told the NYPost. ‘[…]It’s a very modest Sag Harbor house. And we use our summer rental to pay our son’s school.’

The squatter was paying $3,600 a month between October and March but claimed he didn’t have rent for April and dismissed the homeowner’s requests to vacate the property.

The landlord said he is now looking at huge losses for the year – $15,000 in May alone with an extra $55,000 between Memorial and Labor days.

Pictured: A file photo of beach homes in the Hamptons, Long Island, New York. One homeowner said that short-term renters are overstaying at his property in Sag Harbor and refusing to pay rent

New York Governor Andrew Cuomo has postponed rent payments until at least 20 August to help those struggling during the coronavirus crisis. The owner believes his tenants are using it for a free stay in his Long Island property.

Similar scenes are playing out along the string of affluent seaside communities.

A female landlord in Watermill said her tenants, a mother and daughter, stopped paying their $1,600 rent in March when Gov Cuomo announced the move.

The homeowner has cancer and is looking to start chemotherapy soon. She said she is afraid she will lose her home and doesn’t know how she’ll cope with the stress of that and treatment.

She could be earning $90,000 this summer, she told the Post, and she even offered the tenants a one-off payment to coax them out before peak season. 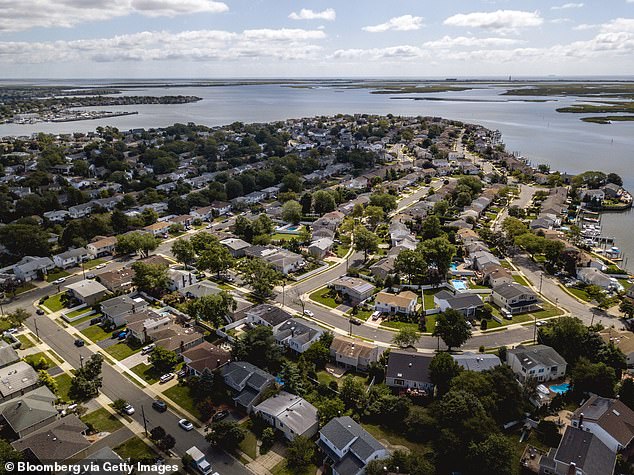 Homes in the Hamptons stand in an aerial photograph taken over Merrick, New York, U.S. in 2019

‘I’ve offered her money to leave and even found her other places to move to that she could afford, but they aren’t in the Hamptons, and she is refusing to leave,’ the tenant said.

She added: ‘This is when we make our money, in the summer. [The tenant] is looking for a free ride in the Hamptons.’

Andrew Saunders, of Saunders & Associates, a leading Hamptons brokerage firm, said that the laws introduced recently by Gov Cuomo ‘allow it to happen’.

He added that some of the squatting tenants are preventing brokers from entering the homes to show new buyers when they are listed for sale.

The eviction moratorium does not excuse tenants from paying rent. They should expect to pay each month or face paying a lump sum once the postponement is lifted on 20 August.