Northern NSW and south-east Queensland have been at the receiving end of the ferocious weather, with several flood and severe weather warnings in place.

Upper Springbrook, in the Gold Coast copped 222mm of rain in just three hours to midnight, as did the Couchy Creek nature reserve in NSW’s Northern Rivers.

A severe thunderstorm warning was issued for the Gold Coast on Friday morning by the Bureau of Meteorology.

Northern NSW and south-east Queensland have been at the receiving end of the ferocious weather, with several flood and severe weather warnings in place 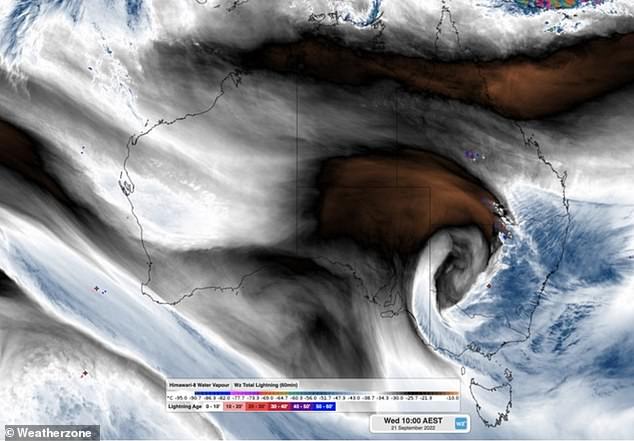 Residents in Coolangatta, Miami and Tweed Heads are set to be impacted with heavy rainfall and damaging winds on the forecast.

The BoM has warned severe thunderstorms could lead to flash flooding in the Gold Coast, Coolangatta and Springbrook. 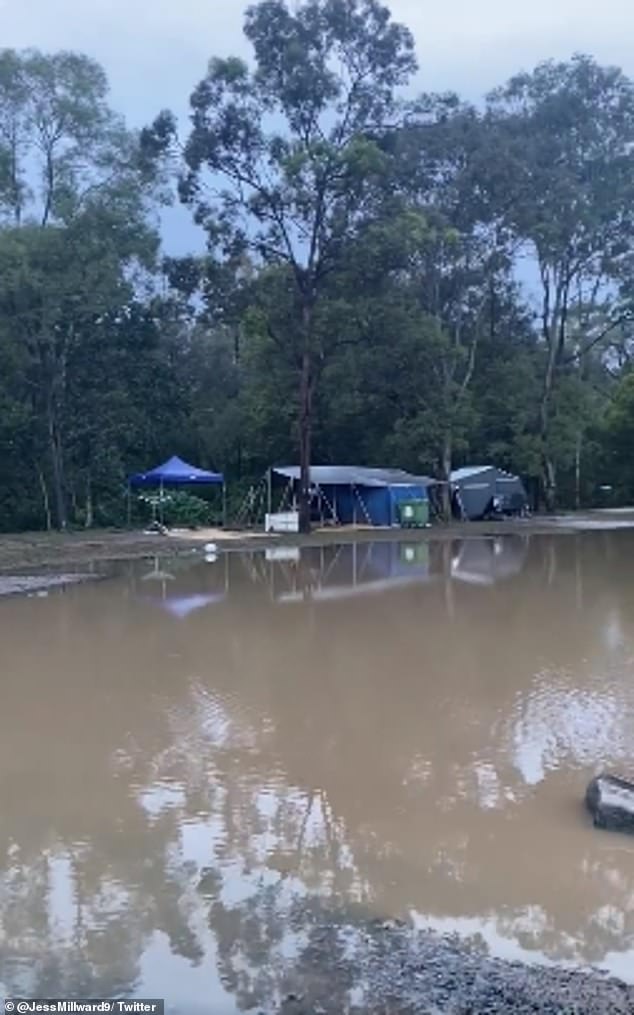 Those camping at the Big 4 site in Helensvale, on the Gold Coast, were forced to flee their tents on Thursday night when they suddenly became flooded

Those camping at the Big 4 site in Helensvale, on the Gold Coast, were forced to flee their tents on Thursday night when they suddenly became flooded.

Footage of the site on Friday morning shows the entire campground flooded, with what appears to be children’s bikes completely submerged underwater.

Meanwhile those in the Northern Rivers have also been warned of severe thunderstorms and more heavy rainfall, with towns in the area still recovering from two major flooding events this year.

‘Heavy rainfall which may lead to flash flooding is expected to continue about the far Northern Rivers district, easing during the morning and clearing in the afternoon,’ the BoM said on Friday.

Lismore, Tweed Heads, Murwillumbah, Byron Bay, Ballina and Casino are all in the firing line.

A moderate flood warning has been issued for the Tweed and Wilson River.

A severe weather warning that was initially issued for NSW’s mid north coast has been cancelled. 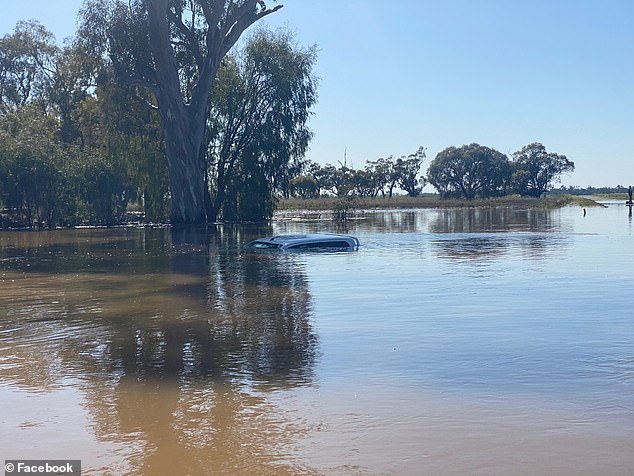 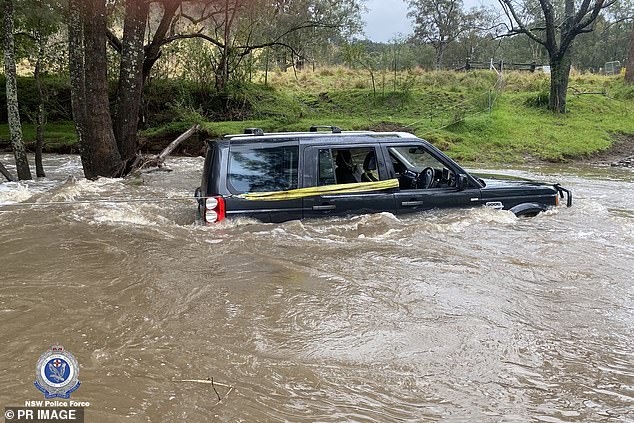 Photos showing the rescue of a four-year-old boy, and two women, 51 and 44, after their vehicle became submerged in floodwaters near Dungog on Thursday 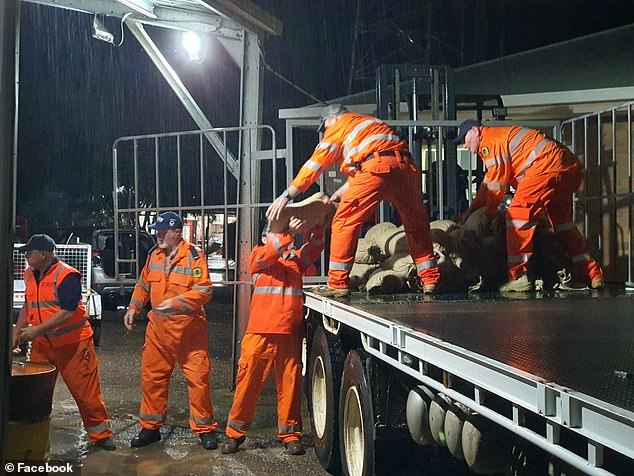 The miserable conditions, that have resulted from a low pressure system, will ruin the plans of many families wanting to get away for the school holidays which begin this weekend in NSW.

NSW Emergency Services Minister Steph Cooke warned on Thursday it was the start of a ‘very long season’ for flood conditions.

‘We’re facing challenges on multiple fronts with prolonged flooding through the west and north-west of NSW, renewed river rises in the Central West and southern parts of NSW,’ she said.

‘Now communities in the Northern Rivers, Mid North Coast and North Coast who have been made flood weary over the past several months are facing an uncertain couple of days with weather conditions worsening.

‘We are at the start of a very long season we expect, this is the third consecutive La Nina, and as we have seen all year our catchments and landscapes are highly saturated. 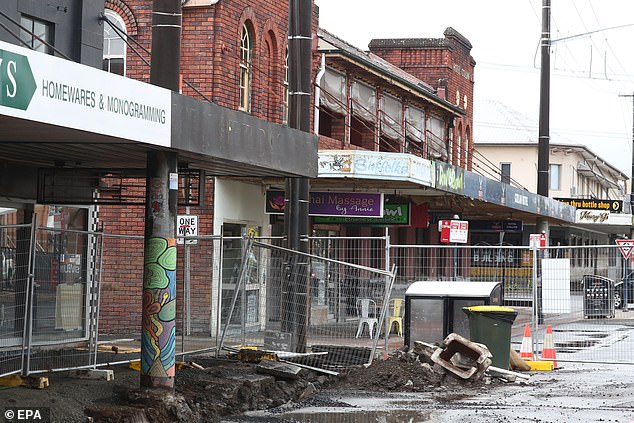 ‘This increases the risk of flash flooding and water coming up very very quickly and catching people unawares.’

The heavy rainfall is expected to ease across the east coast by Friday evening, the BoM said, but showers are still likely over the weekend.

SES NSW has conducted 14 rescues in the past 24 hours, and there were 193 calls for help.

It comes after a four-year-old boy and two women were rescued by a police officer using just a rope and a winch after their vehicle became submerged in floodwaters in the NSW Hunter region.

Authorities were told three people had become trapped in a vehicle at a flooded causeway on Lyons Road at Bingleburra, west of the country town of Dungog, about 9.30am on Thursday. 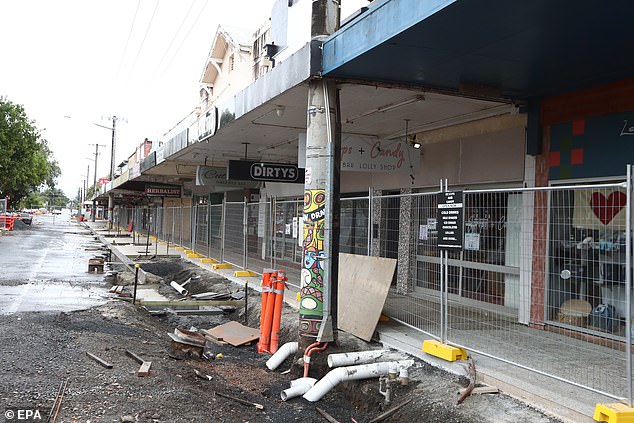 A senior constable soon arrived on the scene, where he saw a black SUV stranded in the swirling current, which was about five metres across.

‘Using a rope as a safety line, (the officer) entered the floodwater and made his way to the vehicle,’ NSW Police said in a statement.

He and a 51-year-old woman with the SUV worked together to pull a four-year-old boy through the window and to safe ground.

The officer then waded back into the water to free the 51-year-old, whose foot was caught on a rock.

After attaching a winch to the SUV to stabilise it, he went back into the water to help a 44-year-old woman trapped inside the vehicle.

She and the young boy were physically uninjured and treated by paramedics for shock.

The officer is being considered for a bravery award, police said.

Flooding is affecting multiple parts of NSW, as a dangerous weather system that hit inland parts of the state tracks east to the coast.

Flood warnings are current in the Northern Rivers, Mid North Coast and Hunter regions, where the rescue occurred.

Police have urged members of the public not to drive through floodwaters and avoid non-essential travel. 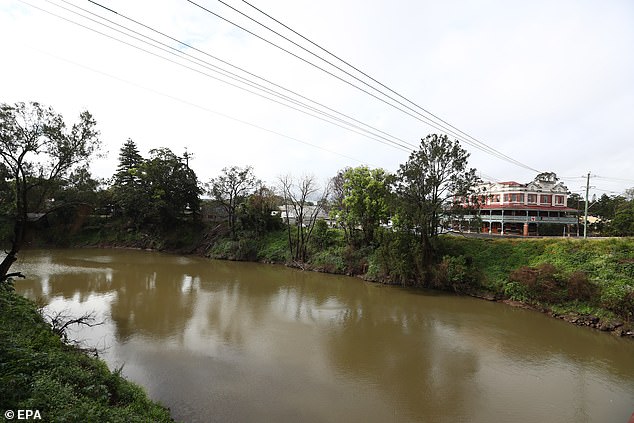 A moderate flood warning has been issued for the Tweed and Wilson River (pictured).