A webcam girl has revealed how she was forced to cut her shopping trip short, after a stranger offered her money for sex in Poundland.

Katy Jones, 26, from Birmingham, recalled how she fled when a punter offered her money, while she was out shopping near her home.

The art graduate, who performs sex acts on camera for an online audience, is campaigning for more support and protection for sex workers.

Katy, whose name has been changed for her safety, also revealed that during her time working as a high class escort to fund her degree last year, she was assaulted and robbed.

The activist was also keen to make it clear that sex workers can come in many forms, and you may unknowingly meet them on the school run.

Katy Jones, 26, from Birmingham, recalled how she fled when a punter offered her money, while she was out shopping near her home

Speaking about her experience, she said: ‘I was recognised by someone I had never spoken to on the site. It was in Poundland of all places.

‘He stopped me and offered me money for sex. All I could think was ‘If this guy offers me a pound, I’m going to die.’

She remembered: ‘Unfortunately, it was really close to my house and that really panicked me.

‘I pretty much ran out of that shop. I was terrified. I thought “I need to get out of here”.’

In October last year, Katy’s laptop broke and she was unable to do her regular webcam work for several months.

In some debt, she decided to try her hand at escorting because she needed cash quickly. 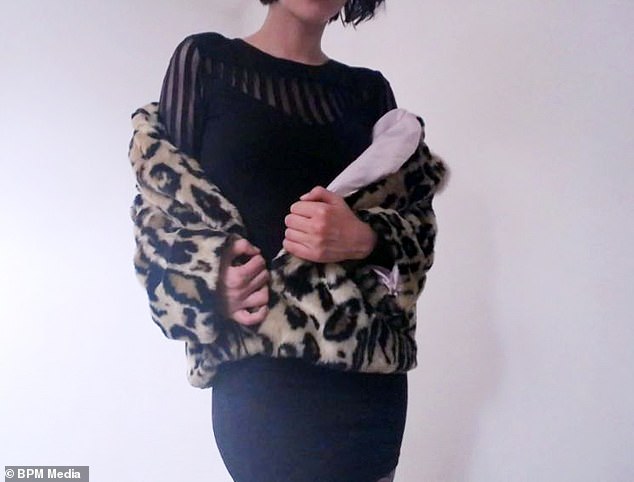 Katy, whose name has been changed for her safety, also revealed that during her time working as a high class escort to fund her degree last year, she was assaulted and robbed

Most escorts can expect to get paid around £150 an hour, but can charge more for overnight stays or special requests.

‘I had debts and I kind of panicked,’ she explains. ‘I made a snap decision that I would try escorting. It was a survival tool for me at that time.

‘Parts of it were really good, like being taken out for nice dinners, staying in nice hotels but even on the more glamorous side of escorting, it is still very high risk.

‘It’s a lot easier when you have some regular clients established, those who you trust, and you stick with them. You can screen yourself and use measures to protect yourself, but there is always a risk that it could turn nasty.’ 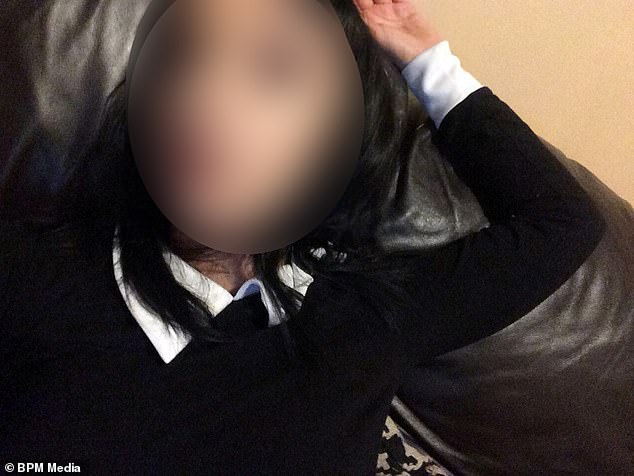 The art graduate, who performs sex acts on camera for an online audience, is campaigning for more support and protection for sex workers

The client will pay for the escort’s time, and if something happens between them sexually then it is between two consenting adults.

There is no obligation to have sex. Clients often indicate what services they want beforehand via message.

‘On my first overnight I fell asleep, which is so dangerous’. Katy remembered.

‘You can get robbed or worse. Luckily, he was a nice guy.’

But on one evening Katy was assaulted by a punter. 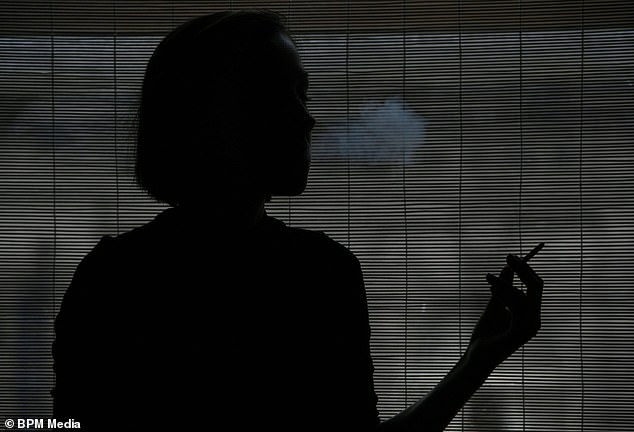 The activist was also keen to make it clear that sex workers can come in many shapes, and you may unknowingly meet them on the school run

‘Even though I’d researched him, seen reviews from other girls, and got my friend to call me at a certain time during our meeting, it still happened,’ she said. ‘It was really difficult. It was a big wake-up call.’

On another occasion, a gang member posed as a client. He intended to rob her while she worked in a flat in Digbeth.

Luckily, she was able to escape before she fell victim – she saw the gang loitering outside, waiting to gain access to the building.

Due to funding cuts to sex worker support services, people often don’t have anywhere to turn to support them through the trauma, Katy warned. 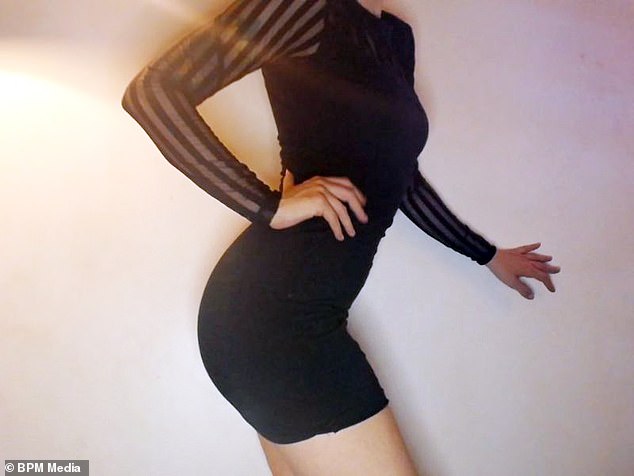 Due to funding cuts to sex worker support services, people often don’t have anywhere to turn to support them through the trauma, Katy warned

The support services she uses have been cut from 14 members of staff to just three.

‘This is terrifying for me,’ said Katy. ‘After the attack, I decided I was just going to go back to webcam.

‘There were times when it felt like I was playing Russian Roulette with my safety, but I didn’t think I had any other options.

‘In the end, I decided that it was just too dangerous for me.’

Katy started working as a webcam girl at university, while studying for a BA degree in Fine Art.

‘It was the classic thing – student needs a bit more money and they end up doing that,’ she says.

‘It was something I could do from home, it was accessible, and because a friend of mine was doing it already, it made me think that I could too. I had a little Google and found out all about it, and I decided to give it a go.’

As a student Katy would work part-time around her studies – but after graduating, she struggled to find consistent work and was barely able to pay her bills.

‘I found out very quickly you can’t make money from a Fine Art degree,’ she recalled.

‘I remember once someone tried to pay me with a packet of crisps and a sandwich, so I started back up with webcam so I could afford to try to get into the art world.

‘I actually got an office job for a bit and I found a lot of the guys there were sexist or would make creepy comments about me.

‘I thought ‘Well, if I’m going to put up with this, I may as well get paid a bit better.’

‘I was also on a zero hours contract so the work just wasn’t reliable.’

Although Katy’s work often involves performing sex acts on webcams, clients will visit the website for other reasons.

Many people are just looking for companionship, she explained.

‘Some people are genuinely really lonely and just want to chat,’ she said.

‘I have a regular who just likes to talk about exploring his sexuality with his wife.

‘It kind of blows my mind that I get paid for that.

‘I’ve also been asked to sit there and just smoke a cigarette. They could probably get that on Youtube, but I’m not going to complain.

‘I think the appeal is that it’s more interactive than regular pornography.

‘And if you’re asked to do something you’re not comfortable with, you can just say ‘No’.’

She has suffered with an anxiety disorder and depression, and is waiting for a possible diagnosis of Asperger’s syndrome – a mild form of autism.

And she believes that sex work has actually helped her cope in a positive way.

‘If I’m having a bad day and feeling way too anxious, I can take a day off,’ she explains. ‘If I’m really struggling with my mental health during the day, sometimes if I feel better at night, I can work then.

‘There’s no phoning in sick or having to explain my anxiety to my manager.’

Katy says her flexible working also means she has more time to pursue her art and music. And she says the work can serve as a lifeline both to sex workers and to their clients.

Many disabled people or transgender women, who might otherwise feel stigmatised in the workplace, find regular income and acceptance in webcam communities, she explained.

‘It can be a lifeline to get an income,’ she added. ‘There is a market for everyone’s interests, whoever you are.

‘Sex work can be a really good survival tool for marginalised groups, which is something that I don’t think a lot of people consider when they’re demonising it.

‘There are also disabled clients who struggle to find partners and sexual experiences. There are those who have a fetish they are scared to talk about, so they go to a professional.

‘They feel less embarrassed with a stranger.’

The webcam girl believes the way forward is to decriminalise sex work, and allow women to work in safe environments.

‘One of the biggest hurdles is getting people to accept that sex work is not in the underworld, but part of our society, whether we like it or not,’ explained Katy.

‘Recently someone told me ‘Oh, I know about Secret Diary of a Call Girl’ – and that’s where they’re getting their information from.

‘We are ordinary women trying to make ends meet. We could be your neighbour, next to you in the supermarket, or on the same school run.

‘It’s incredibly hard to talk about without ‘outing’ yourself, and the stigma is huge. I don’t feel like I should be ashamed, but there are risks in ‘outing’ myself.

‘We’re not asking for much. We’re just asking to be recognised as people, without having to hide in the shadows where the danger really lies.’

Even those who seemingly support women’s rights sometimes oppose the rights of sex workers.

And she gets trolled on social media by feminists who believe sex work is intrinsically oppressive.

‘They see themselves as sex worker saviours,’ she explained. ‘But they don’t make any effort to understand what sex workers actually want.

‘I would like to believe that they have our best interests at heart, but they can’t move on from the idea that we are being exploited.

‘For many women webcam work can keep them safer and off the streets.

‘In an ideal world, maybe sex work wouldn’t exist, but we don’t live in that world.

In the UK there are an estimated 72,800 sex workers – 88 per cent of them women, and most are mothers working to support families.

‘On paper, criminalising sex work is for the good because violence does happen,’ argued Katy. ‘But in reality it causes more damage to sex workers’ safety.

‘They feel they aren’t able report it to the police without criminalising themselves.

‘They’re attacking the symptom, not the cause.’