A website offering sex workers ‘like takeaways’ is putting women at risk of exploitation, the BBC has warned.

Vivastreet, founded by a French businessman, is a classifieds website where users can list anything from cars to second-hand furniture for free. But there is also an ‘adult’ section where users can pay £50 a week to advertise sexual services, according to BBC Panorama.

While it is legal for a sex worker to sell their services in the UK, pimps and people traffickers use this same online platform to pose as women and bring in punters for cash.

Reporter Bronagh Munro investigated Vivastreet for Panorama: Online Pimps Exposed and found how it has become a go-to for pimps and is brought up ‘time and time again’ in exploitation cases.

Shocking scenes of a police raid on an address in Lancashire showed a woman standing alone in a filthy hotel room with a man, who she claimed to be her ‘boyfriend’, downstairs. The suspected pimp was found to be advertising a sex worker’s services and had adverts on Vivastreet. For £180 an hour, punters could pay for ‘kissing, massage and sex in different positions.’

A separate number listed on Vivastreet led an undercover reporter to a brothel where women offered to do ‘anything’ for £250.

BBC reporter Bronagh Munro investigated pimps and sex workers operating on Vivastreet for Panorama: Online Pimps Exposed and revealed how the website is facilitating the exploitation of women. She joined Lancashire Police in a raid on a property where officers found a woman (pictured) and a man who was arranging sexual services and listings on Vivastreet 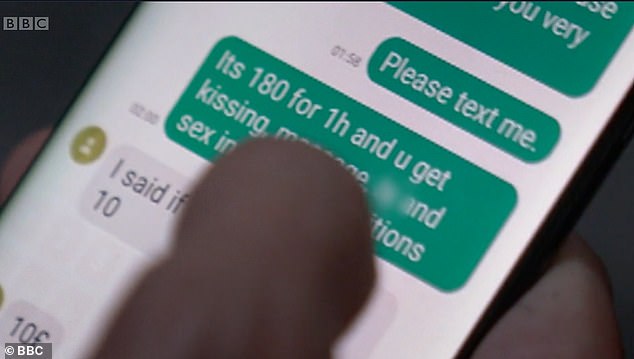 Texts on the man’s phone revealed how punters paid £180 for an hour of ‘kissing, massage and sex in different positions’. He also had text messages from a Vivastreet telephone number 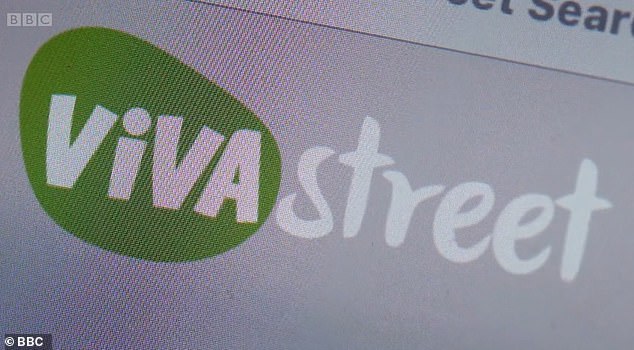 Vivastreet, pictured, founded by a French businessman, is a classifieds website where users can list anything from cars to second-hand furniture for free. But there is also an ‘adult’ section where sex workers and pimps pay £50-a-week to advertise their services to punters

Author and activist Kat Banyard said: ‘Vivastreet is a magnet for sex traffickers, and that’s because Vivastreet makes it so quick and easy to advertise women to sex buyers.

‘The website has the effect of concentrating and centralising demand from men across the country who are willing to sexually exploit women. That is the customer base for traffickers. Of course they are going to go there. It’s an absolute gift to them.’

Dame Diana Johnson, MP for Kingston upon Hull North, who described the UK as a ‘pimp’s paradise’ and told the BBC: ‘I mean, Vivastreet is pimping women. That’s what it seems to me they are doing they’re enabling the pimping of women.

‘And in lots of other cases, pimping is illegal, it’s a criminal offence. In this case, it doesn’t seem to be. It seems to be that’s wrong and it’s something Parliament needs to address.’

Detective Sergeant Stuart Peall, from Lancashire Police, carried out a welfare and safeguarding check on a terraced house where they found a lone woman in a filthy upstairs bedroom and a man who she claimed was her ‘boyfriend’.

But his phone revealed countless messages from men arranging sexual services, as well as texts from a Vivastreet number reminding him to renew his adverts on the site. 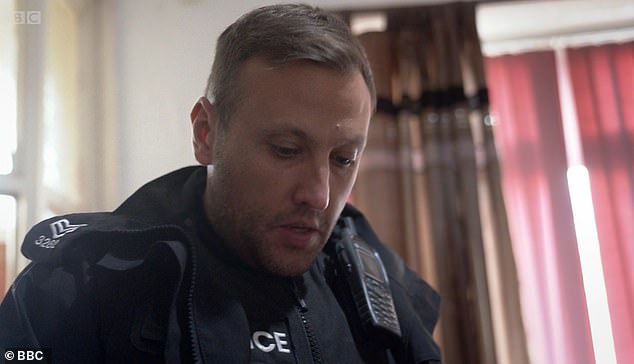 Detective Sergeant Stuart Peall, from Lancashire Police, pictured, carried out a welfare and safeguarding check on a terraced house where they found a lone woman in a filthy upstairs bedroom and a man who she claimed was her ‘boyfriend’ 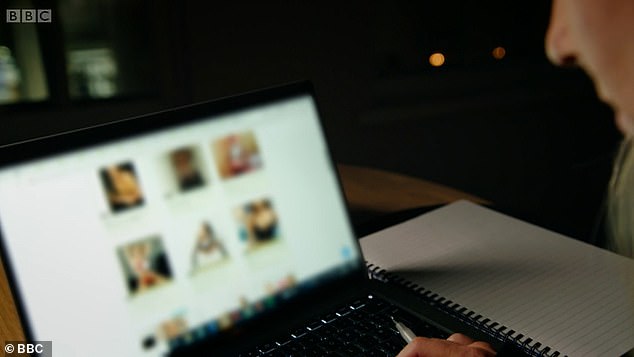 Peall explained Vivastreet, seen blurred, plays a ‘massive’ role in the sex industry. ‘It’s very common knowledge that if you need sexual services, Vivastreet is where you’ll find it,’ he said

Peall said: ‘He brought his phone down, he’s unlocked the phone and we’ve gone straight to the messages, and they are absolutely littered on a daily basis back to August with sexual services being organised… He’s controlling the prostitution, he’s in total control.’

Selling sex is legal in England but pimping and sex trafficking is against the law.

The man, whose identity was protected, was suspected of trafficking and controlling prostitution for gain, but for Vivastreet, he’s a valued customer.

‘It’s very common knowledge that if you need sexual services, Vivastreet is where you’ll find it,’ he said. ‘You can arrange what you want, what you want the girl to look like. it’s like a takeaway menu.’

He continued: ‘There isn’t a job we haven’t done that’s not Vivastreet. Every single job is Vivastreet, they advertise over Vivastreet.’

Munro explained every night there are 12,000 women ‘for sale’ on Vivastreet across the UK. 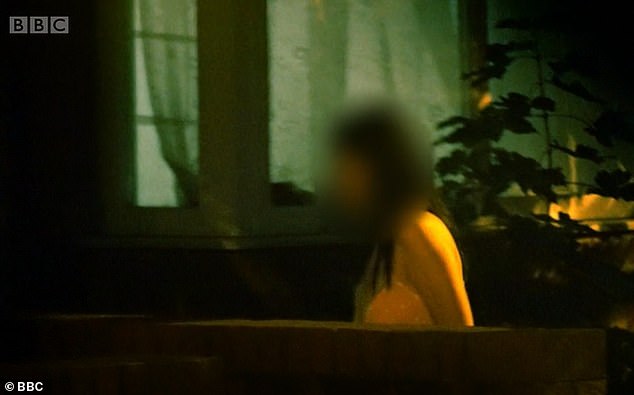 The crew visited an address in Birmingham, above, which was associated with a woman advertised on Vivastreet. Every night there are 12,000 women listed on Vivastreet 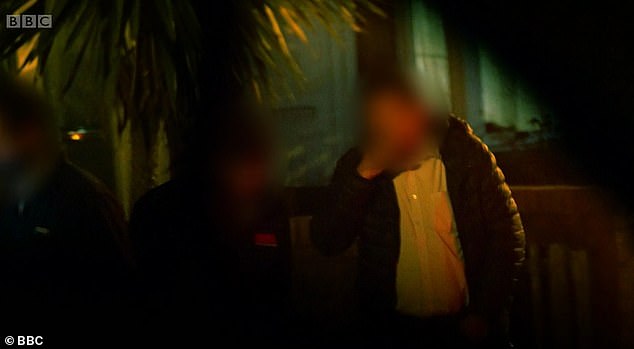 Men were seen milling around outside the Birmingham property, as seen in this camera footage taken from a secret recording by the BBC

The crew visited an address in Birmingham which was associated with a woman advertised on Vivastreet. Men were seen milling around outside, waiting to enter the property.

The website, which has reportedly made ‘millions’, has come up ‘time and time again in pimping and sex trafficking cases’, Munro said.

The documentary highlighted the case of one sex trafficker who spent £25,000 on adverts on Vivastreet and was even given his own account manager.

Data pulled from the website showed how the same mobile phone number was used across several accounts, suggesting the women were being ‘managed’ by a single person.

Multiple accounts also used the same language and even contained the same spelling mistakes, again indicating they might be run by a pimp controlling the women.

In one example, an undercover reporter phoned a number linked to several listings using the phrase ‘I like generous gentlemen’.

Posing as someone looking to hire sex workers for a party, he ended up at a terraced property where he was shown women who would be available to hire for £250 each for two hours.

She said he could dictate what the women would wear and could have ‘sex, massage, drink, whatever you enjoy’. 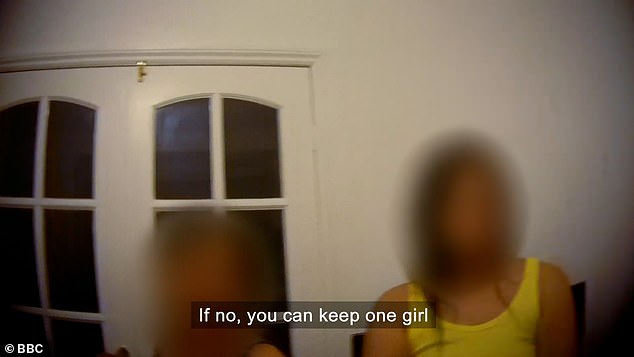 Posing as someone looking to hire sex workers for a party, an undercover reporter ended up at a terraced property where he was shown women who would be available to hire for £250 each for two hours, above. He found the number through a Vivastreet listing linked to other pages

She continued: ‘Striptease, dancing, party – what you want. Two hours. You choose which one you like, one for you, every friend he take which girl he want. Everybody he can enjoy and if you want to change the girls you can change, and if no, you can keep the girl for two hours only for yourself.’

The women later said they worked for themselves and didn’t have a pimp. But one of the girls looked a lot younger than the others and appeared to be following orders from the woman ‘in charge’.

As the reporter left the house, the younger looking woman was sent outside to a waiting car, wearing only a dressing gown over her underwear.

The undercover reporter said: ‘Underneath she was pretty much just in her underwear. I do think they’re vulnerable and exploited.

‘It may be the case they don’t even realise the extent they’re being exploited. They were clearly under control, I don’t think they see much of anything except the brothel and places they are taken to.’

Undercover reporters also visited addresses operated by a suspected pimp in Northern Ireland, where paying for sex is illegal.

In secret filming, he said he likes to have ‘one girl per apartment’ and that the girl needs to be ‘above age, not trafficked’. He added: ‘If you tick those three things, police can’t do anything, nobody can do anything.’

Cameras filmed two Romanian women being dropped off at a property associated with the suspected pimp. Within days their adverts appear on Vivastreet and men are filmed turning up at the door.

The suspected pimp was also filmed picking up a woman from Dublin airport and taking her to an address in Belfast. An undercover reporter later visited the apartment, where she told him her fee was £100 for half an hour.

The suspected pimp told the programme their ‘allegations are all incorrect. He breaks no laws and doesn’t exploit anyone’.

The personals section of the Vivastreet website was shut down in France but can still be accessed in the UK.

Detective Sergeant Peall said without the website, a mass of the exploitation would stop. ‘It’s all about advertisements, it’s all about the pimp selling them to the public’,’ he said.

Vivastreet told the programme: ‘Providing a safe platform is our top priority [and it is] committed to eradicating any potential exploitation. It has a range of stringent measures in place to detect criminality and this year more than 29,000 ads have been rejected.’ It said its automated messages, like those apparently sent to the suspected pimp in the first house, were not targeted to specific users.

‘There are other warning signs too – we can also see multiple ads using the same words and phrases. They’ve even got the same spelling mistakes. These are some of the classic signs that the women in these ads and being managed and controlled.’

Vivastreet denied primping women and said ‘we proactively report suspicious content to police around the country and assist with prosecutions’. It said it is ‘working with the police and Home Office to develop industry-wide approach to preventing exploitation and online trafficking’.

It added it works with police and charities to ‘continuously strengthen safety measures’ staff are trained so they are ‘alert to the signs of exploitation’ and know what steps to take if they suspect trafficking. It has an ‘independent verification system’ for higher risk advertisers.