A woman who donned a lace white gown complete with a train to her brother’s big day has been branded ‘inappropriate’ – after people mistook her for the bride.

An anonymous woman, believed to be from the UK, took to Reddit and shared a photo of the controversial dress and penned: ‘This girl looks absolutely gorgeous, stunning and every other word for perfect. But she is NOT the bride. You had one job…’

Later she found the original Facebook post about the controversy, which revealed the wedding had taken place in the Czech Republic and that the wearer of the offending gown was in fact the groom’s sister.

And it wasn’t long before others took to the comments section in agreement – with one saying her ‘dress is outshining the bride.’

‘This isn’t even just an inappropriate white dress. It’s a wedding gown. It even has a train. It would be a shame if someone accidentally spilled a glass of Cabernet on that,’ wrote one, while a second joked: ‘That’s what bridesmaids are for.’

A woman from the UK took to Reddit to share a photo she’d seen in a Facebook wedding shaming group, showing a woman attending her brother’s big day in a gown that looked a lot like a wedding dress 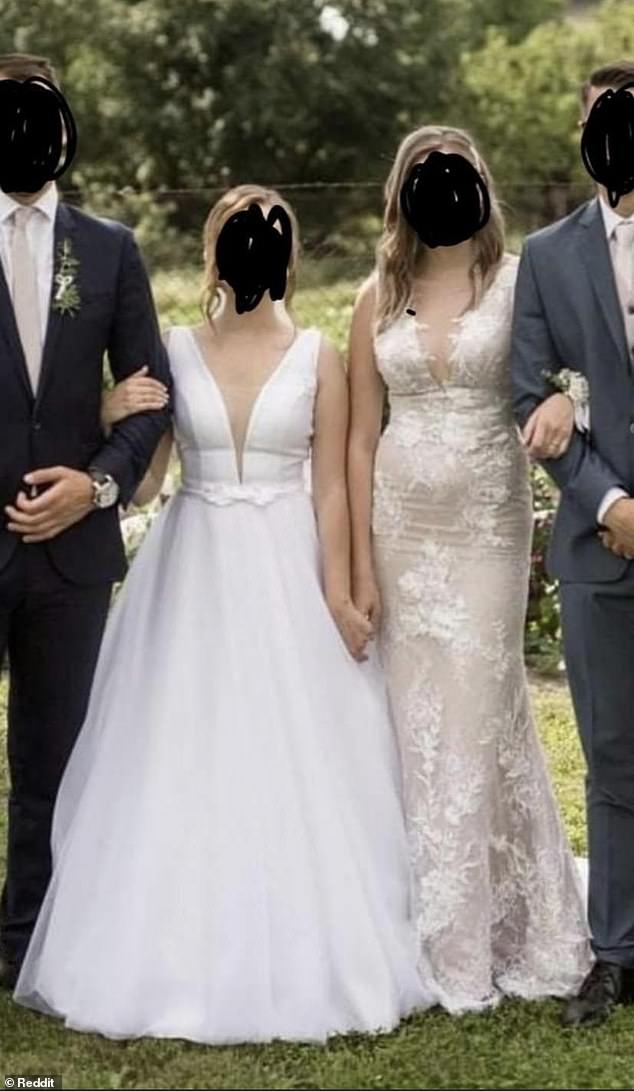 No hard feelings! In another snap, the bride could be seen holding hands with her new sister-in-law, despite many commenters arguing she’d been upstaged

While many agreed the dress was ‘stunning’, they struggled to comprehend how someone could wear a bridal gown to someone else’s big day.

‘Unreal, like does she not have a friend to perhaps suggest that, lovely though the gown might be, this is NOT the function to wear it to?’ wrote one, while a second commented.

‘I’d say this would only be ok to wear if the event wasn’t a wedding. Go ahead and wear it to a gala.’

A third added: ‘I can’t fathom how some people think everything is always about them…’

Meanwhile, others didn’t hold back and told how if it was their wedding day, they’d be quick to kick the wedding guest out.

Taking to the comments section, one person penned: ‘If someone showed up in this to my wedding they’d be kicked out immediately’ (pictured)

‘I mean if someone turns up to a wedding dressed like this it’s 100% appropriate to kick them out,’ wrote one, while another agreed: ‘Lmao if someone showed up in this to my wedding they’d be kicked out immediately.’

But some were so shocked by the wedding guest’s choice of bridal gown that they refused to believe she wasn’t the bride.

‘I refuse to believe this is anything other than the bride and groom,’ wrote one, while a second agreed: ‘Agreed! Cannot even fathom that someone would wear what clearly looks like a wedding dress to someone’s wedding. Besides, the guy in the pic very much looks like a groom right down to the boutonnière. However…. he doesn’t have a wedding band on hmmmm.’

However, a further clarified: ‘She’s not the bride. I’ve seen the picture of her standing with the bride.’