Edwards (pictured) returned to the scene but did not stop and she failed to report the accident, which killed Brian Croxon

A driver who killed an old man during a ‘hands-free’ phone conversation with her boyfriend left other motorists to attend to him despite returning to the scene to drive past slowly.

Anna Edwards, 25, was speaking to her partner on a car headset when she failed to spot 77-year-old Brian Croxon, who had slipped on cobbles and fallen into the road.

Despite another car in front taking evasive action, Edwards drove over Mr Croxon as he lay in the road.

The BUPA assistant wept as she was fined £500 on Friday for failing to stop or report an accident at Minshull Street Crown Court in Manchester.

She turned to Mr Croxon’s family to say ‘sorry’, but they left court without comment.

Mr Croxon suffered fatal injuries outside Royton Brass Band club in Oldham, Greater Manchester, where he was president for 20 years.

Edwards claimed she thought she had hit a pile of ‘rubbish’ dumped in the road and she felt unable to swerve. It also emerged one of her Ford Fiesta’s dipped headlights was faulty.

She stood trial accused of causing death by careless driving with prosecutors accusing her of being ‘distracted’ by the phone call. She was cleared of the charge having earlier admitted failing to stop or report an accident. Her licence was hit with eight penalty points but she was spared a driving ban. 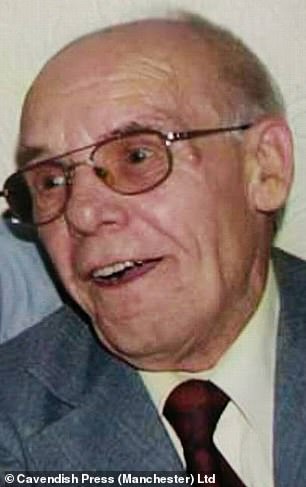 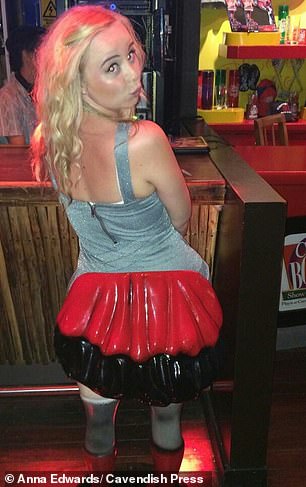 Mr Croxon (pictured, left) slipped on cobbles and fell into the road, but Edwards (right) says she thought a pile of rubbish had been dumped in the street and felt unable to swerve

Motorists are banned from using handheld phones at the wheel but can legally use hands-free kits to field calls. Road safety groups believe mobile phones should be completely switched off while driving, to avoid any distractions.

The tragedy occurred at 11pm on December 8 last year whilst Edwards was in the midst of a four minute 20 second phone call with her boyfriend, with whom she had earlier been arguing.

‘One of her dipped headlights was not working on the day of the incident and there’s evidence to suggest that it had not been working for about three weeks,’ said prosecutor Kevin Donnelly.

‘At the time of the collision, she was in a conversation with somebody although she was using a car headset which is not unlawful.’

Mr Croxon, who visited the brass band club six nights a week, had arrived at around 9.10pm and left just under two hours later.

Outside the club at 11pm he was seen to stumble on cobbles at a road junction before falling into the the path of a Citroen Piccasso driven by Kelly Winstanley. 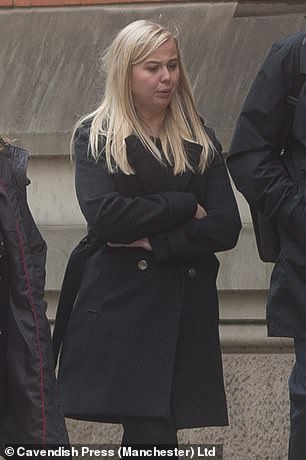 Mr Donnelly said: ‘Mr Croxon had three single whiskeys and lemonades but did not seem to be drunk according to a member of staff. Miss Winstanley describes him as standing on a cobbled surface of road and as she approached, something caused him to stumble into the road directly in front of her.

‘Miss Winstanley’s instant reaction was to swerve to the right to avoid hitting him then swerved back into her own lane and she looked in her mirror and saw him motionless.

‘The defendant was also driving in the same direction as Miss Winstanley but she drove over Mr Croxon as he lay in the road. Although something caused him to fall in the road, he was alive and what killed him was the impact of the defendant’s Ford Fiesta.

‘The prosecution’s case is that Anna Edwards did not swerve to avoid hitting Brian Croxon and did not brake to come to a halt.’

CCTV footage examined by police showed Edwards was travelling below the 30mph speed limit at between 24mph and 28mph and was travelling 100 metres behind Miss Winstanley’s Citroen.

The prosecutor added: ‘The stopping time is somewhere in the region of 11 seconds and Mr Croxon would have been visible to the defendant for about 10 seconds for a distance of about 100 metres.

‘After the Citroen Picasso went past Mr Croxon, Ms Edwards had an uninterrupted view of Mr Croxon.

‘She did not immediately stop. She drove on to the next junction in the road and she turned around and came back to the scene of the collision but by the time she got back, a number of people were surrounding Brian Croxon. She did not stop, she drove past the scene slowly and then she drove on.

What’s the law on using hands-free on the road?

Holding a phone is illegal while driving.

Motorists much use hands-free devices such as a bluetooth headset, voice command or dashboard phone holder.

The hands-free device must not block your view and drivers must stay in full control.

If police believe you to be distracted or losing control, you can be prosecuted.

The law also applies when stopped at traffic lights, stuck in traffic or supervising a learner.

You can only use a handset when safely parked or if you need to call 999 or 112 in an emergency.

Drivers who passed their test in the last two years face losing their licences if caught flouting the rules. Six penalty points and a £200 fine can apply to others.

Blocking your view of the road can result in three penalty points, as can failing to have control of your vehicle.

‘If Anna Edwards had acted immediately to what she saw in the road, she would have brought her car to a halt in something like 4.5 seconds and that would have carried a distance of about 30 metres.’

Edwards was arrested later. She gave a ‘no comment’ interview to police but issued a statement saying she saw a ‘dark object in the road and was unable to move around it’.

She told the trial she was speaking to her boyfriend as she ‘she wanted company’ and denied claims she was distracted.

‘We had been arguing because we hadn’t seen each other much lately and we were just deciding whether to see each other,’ she said. ‘We were planning to meet, so I set off to his house in Salford. We were just talking about his day and football.’

Edwards denied arguing with her boyfriend at the wheel and said she did not know her front passenger headlight was not working.

When asked whether she realised Mr Croxon was lying in the road, she said: ‘It didn’t look like a person – I thought it was rubbish.

‘What was going through my head was that I needed to avoid it, but it didn’t feel safe to swerve. The car on the other side of the road was obstructing me from doing a full swerve.

‘At the next junction, I turned around as I needed to know. I suspected that it was a person, but I didn’t know 100 per cent.

‘I was so scared. I saw people and cars all together and I was petrified. I didn’t want to get out of the car, I didn’t know what to say. I stopped and put my hazards on, but when I looked over, I just thought that I couldn’t get out of the car. I have never been in trouble before.

Sentencing Judge Bernadette Baxter told Edwards: ‘I understand this has been an extremely stressful time for you and you are genuinely remorseful for not having stopped and reporting the accident. I hope you understand just how dangerous that behaviour was.’