Following a day of explosive testimony, Harvey Weinstein’s trial will continue with as many as five witnesses taking the stand.

The prosecution is expected to call five ancillary witnesses on Thursday to corroborate Tarale Wulff and Dawn Dunning’s testimony shared yesterday where they both accused the movie mogul of assaulting them in the 2000s.

On Wednesday the jury heard from once-aspiring actress Tarale Wulff, who testified that Weinstein masturbated in front of her while she was working as a cocktail waitress at the upscale New York club Cipriani and raped her at his New York City apartment in 2005 after calling her in for an audition.

Dunning’s fiance at the time of the attack is slated to testify before the jury Thursday.

Following a day of explosive testimony, Harvey Weinstein’s trial will continue with as many as five witnesses taking the stand on Thursday. Weinstein looked serious and bore a notable mark over his left eyebrow as he entered the Manhattan courthouse with his walker Thursday morning 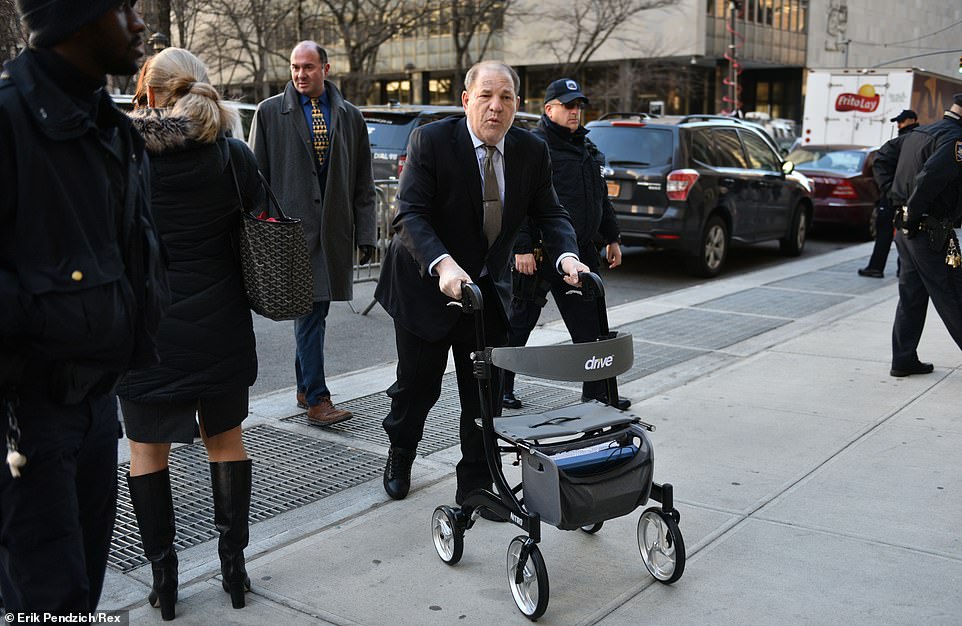 Weinstein hobbled into court with his handy walker, just as he has in the previous days of his high-profile trial 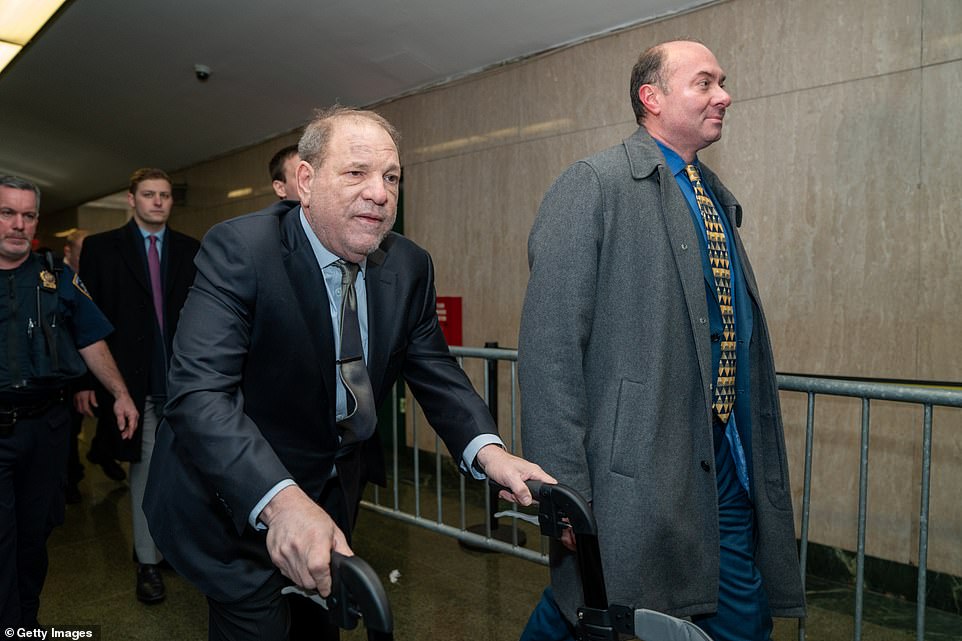 On Thursday the jury will hear from as many as five witnesses including Dawn Dunning’s ex fiance, a Cipriani employee, and a casting director 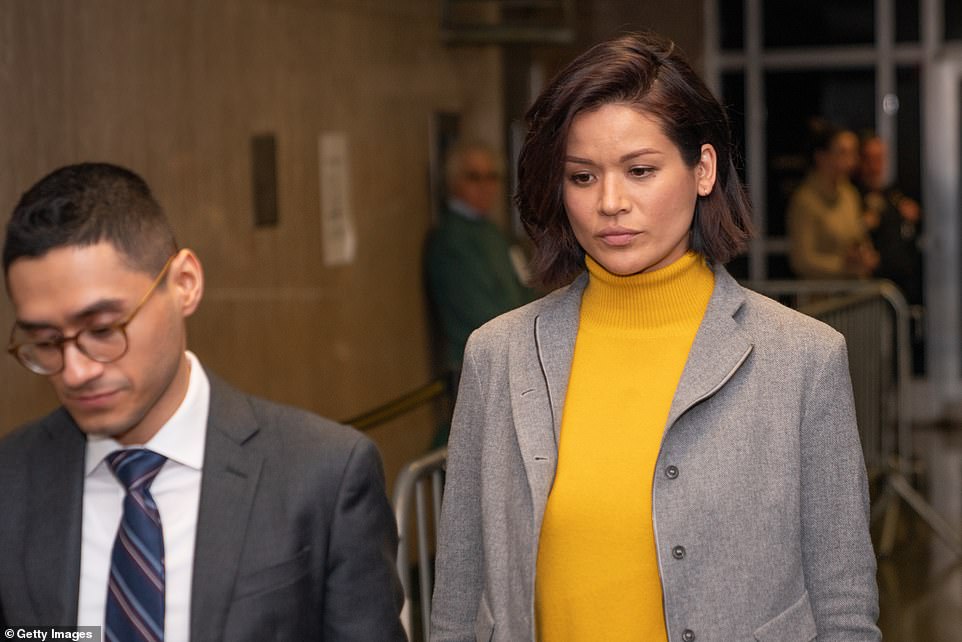 Tarale Wulff (center in yellow turtleneck) took the witness stand at Weinstein’s trial Wednesday. She claims he allegedly masturbated in front of her at the Cipriani’s club in New York and on a second occasion allegedly raped her at his apartment 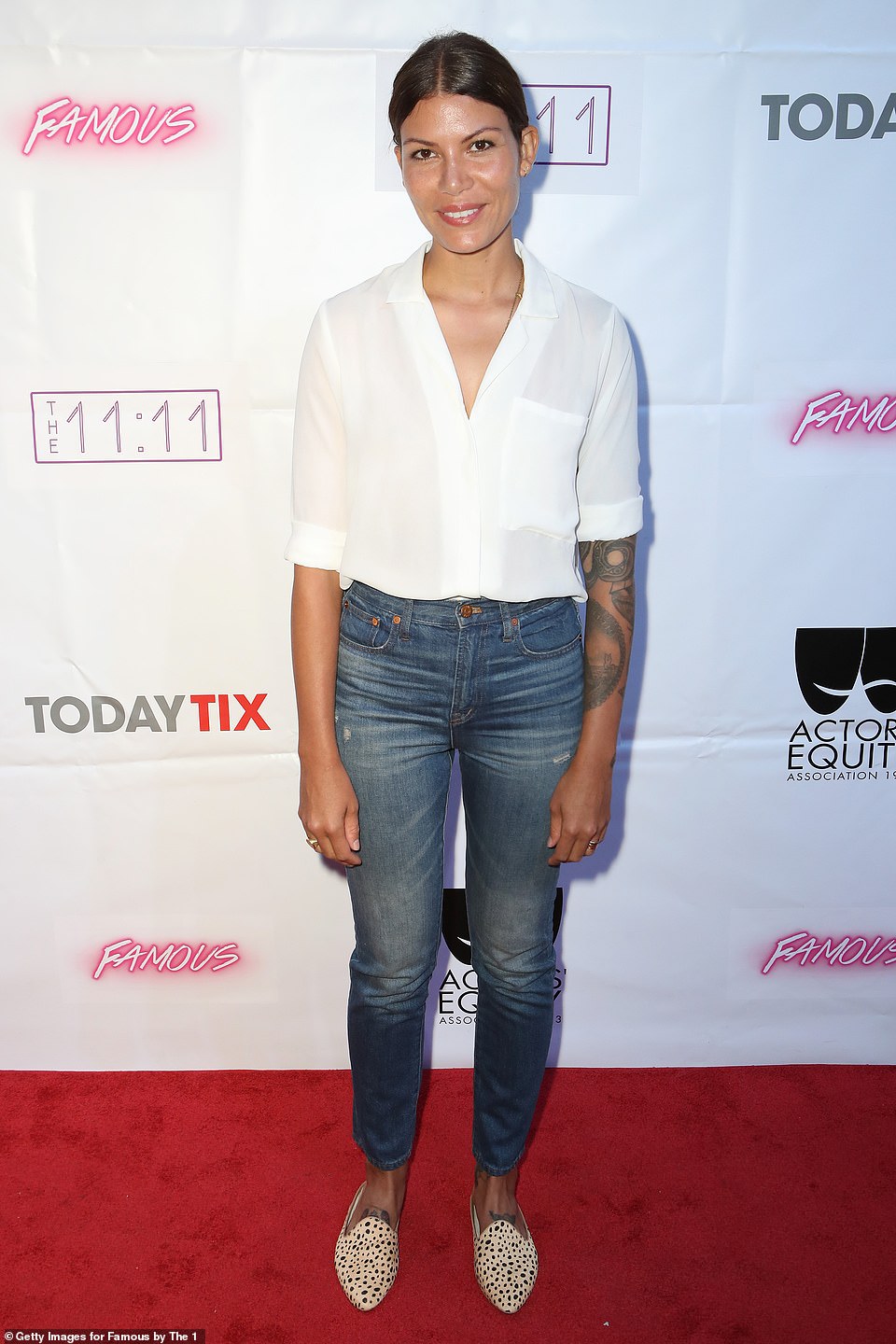 The jury will also hear from a Cipriani manager and an employee at the law firm Boies Schiller, who will detail how the firm hired Black Cube security firm to squash stories about his alleged assaults from going public.

Another witness will be one of the casting directors of the movie Pulse, a 2006 Weinstein Co. release.

The prosecution says Weinstein dangled a part for Dunning in Pulse, without revealing to her that his brother, Bob Weinstein, was controlling the production and that his overture therefore carried less weight.

Wulff and Dunning are so-called ‘Molineux’ witnesses who testified about the producer’s ‘prior bad acts’ at the high-profile trial in New York that’s considered a milestone for the #MeToo movement.

But, Weinstein isn’t facing charges in those cases due to the statue of limitations and other legal issues. Prosecutors are using their testimony to bolster their case against the embattled producer. 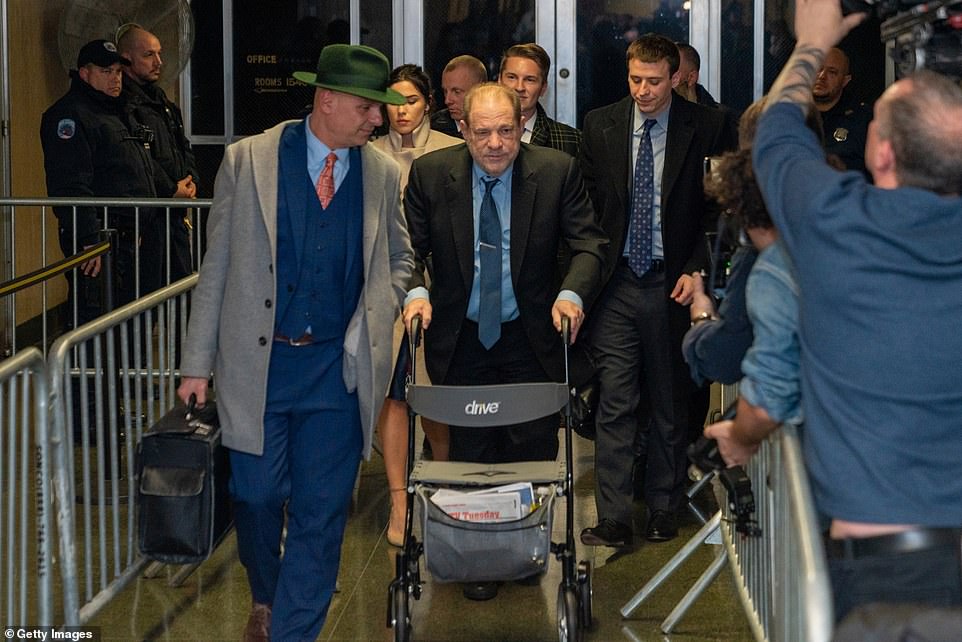 Harvey Weinstein leaves Manhattan Criminal Court Wednesday. As the disgraced mogul hobbled out with the help of his walker a reporter asked: ‘Did you tell Dawn Dunning about Charlize Theron and Salma Hayek?’

The charges he faces come from the assault allegations of Mimi Haleyi, who accused him of forcibly performing oral sex on her in 2006 and who testified Monday, and Jessica Mann, who is yet to testify and claims Weinstein raped her in a New York hotel 2013.

Weinstein, 67, is accused of five felony counts including rape and predatory sexual assault. Those charges stem from the alleged assaults of former Project Runway production assistant Mimi Haley in 2006 and aspiring actress Jessica Mann in 2013.

The movie mogul has pleaded not guilty to those charges and his defense team is honing in on his accusers’ continued contact with Weinstein after the alleged assaults. 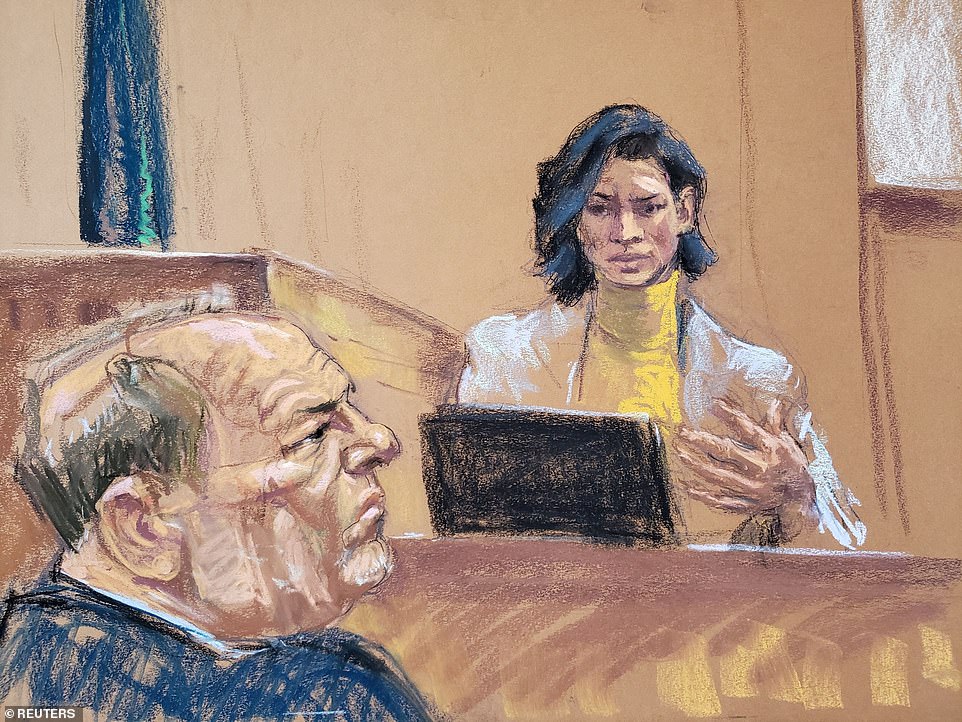 ‘That’s when my red flag finally went up. I told him I can’t. He said don’t worry, I’ve had a vasectomy. I just froze,’ Wulff testified Wednesday as Weinstein watched on

Wulff was an aspiring actress working as a cocktail waitress at the members-only lounge of New York’s upscale club Cipriani’s when she met Weinstein in 2005 and he offered her career help.

Later that night Weinstein approached her while she was by the bar and he ‘led me by my arm’ through a door to a back area and up some stairs. She thought they were seeking a private area to talk about her career.

Wulff revealed some time after that incident Weinstein’s assistant called her and asked her to come in for an audition.

She went to his office and received a script but then was told ‘Harvey wants to see you’ and there was a car waiting for her outside and she was driven to the mogul’s apartment where he allegedly assaulted her.

‘At some point…he took me by the arms and turned me around and put me on the bed and leaned on top of me,’ she said.

‘That’s when my red flag finally went up. I told him I can’t. He said don’t worry, I’ve had a vasectomy. I just froze,’ she added.

When asked what ran through her mind at that point, Wulff struggled to get the words out and said she wanted to ‘get through this’ and that she was ‘numb’.

She said: ‘At one point he put himself inside of me and raped me and I just remember getting up (afterwards).’

When Wulff arrived to the office, an assistant told her ‘come back when you’re ready to read’ for the part.

Wulff never did and never auditioned. 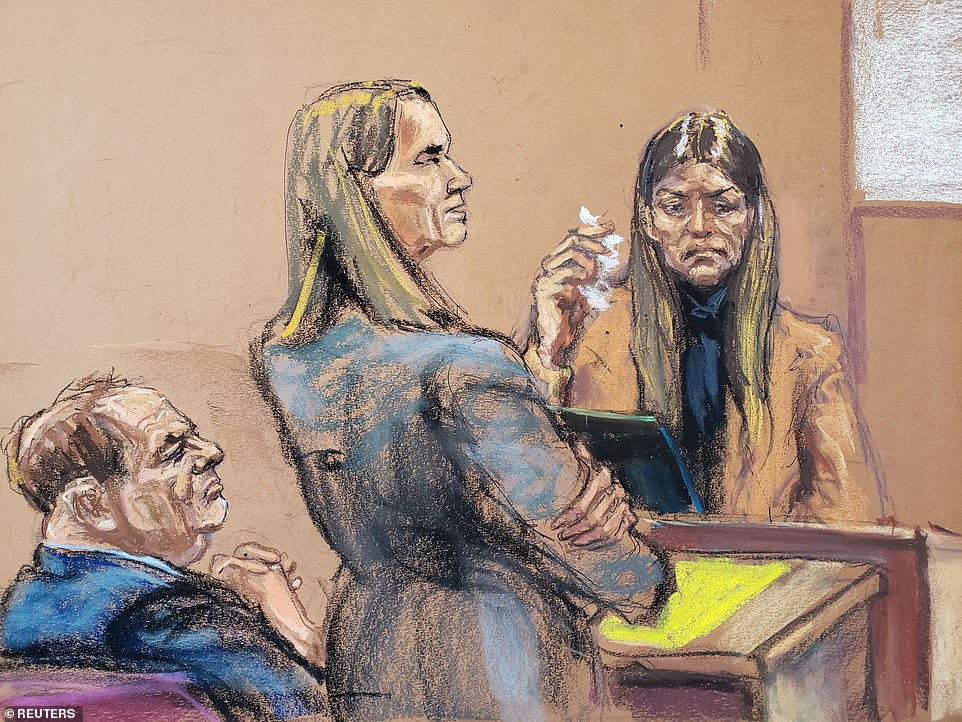 Dunning said she first met Weinstein working as a waitress at a Manhattan nightclub called PM in 2004 when she was 24 years old. She told him she was an aspiring actress and gave him her number. To her surprise his assistant called soon after and arranged a screen test at Miramax, his production company.

Dunning and Weinstein met for several meetings and he got her and her fiance tickets to movie premieres and industry events.

Then in the spring of 2004 he invited her to what she thought was a business meeting at a SoHo hotel and allegedly put his hand up her skirt and inserted a finger into her vagina in that meeting.

‘I was talking with Harvey and he led me into the other room and I sat down on the bed. I was wearing a skirt and he put his hand up my skirt,’ she said through tears.

‘It was just a few seconds but I just froze for a minute and stood up. He told me don’t make a big deal out of it. He apologized and said it wouldn’t happen again.’

‘I thought he was kidding. When I started asking (about it) he got really angry and started screaming. He said you’ll never make it in this business! This is how the industry works! This is how these three actresses got to where they are,’ she continued.

When asked to name those actresses Dunning said: ‘It was Charlize Theron, Salma Hayek and I believe Uma Thurman.’

Frightened, Dunning ran out of the door and ‘heard him screaming as I was leaving’.

What’s happened in the trial so far

On Monday Haleyi, whose allegations are at the heart of the Weinstein case, broke down in tears as she recounted how the film honcho, who got her a job as a production assistant on the show Project Runway, allegedly forcibly performed oral sex on her while she was on her period at his New York City apartment in July 2006. She also claimed he raped her at a TriBeCa hotel two weeks afterwards. 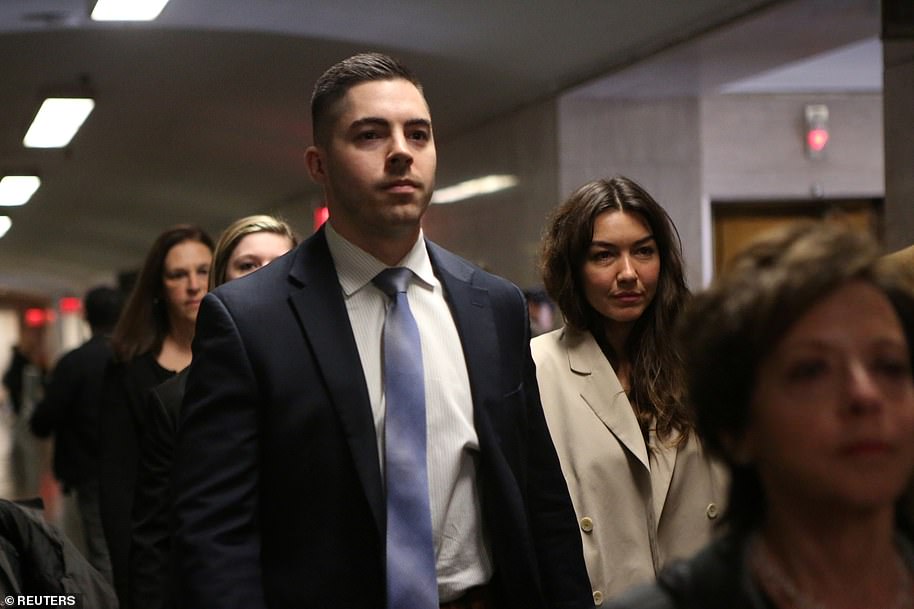 On Tuesday Haleyi’s roommate in 2006, Elizabeth Entin, testified to corroborate her claims.  Entin said on one occasion Weinstein barged into their home to demand Haleyi go to Paris with him but got scared by her pet Chihuahua Peanut.

On Wednesday Tarale Wulff and Dawn Dunning, both so-called ‘Molineux’ witnesses, testified to demonstrate Weinstein’s ‘prior bad acts’ and pattern of pattern behavior. Weinstein’s charges do not stem from their accounts.

Tarale Wulff testified that Weinstein masturbated in front of her while she was working as a cocktail waitress at the upscale New York club Cipriani and raped her at his New York City apartment in 2005 after calling her in for an audition saying ‘Don’t worry, I’ve had a vasectomy’.

Last week Annabella Sciorra testified that Weinstein forced his way into her Manhattan apartment one winter night in 1993 or 1994 and violently raped her. 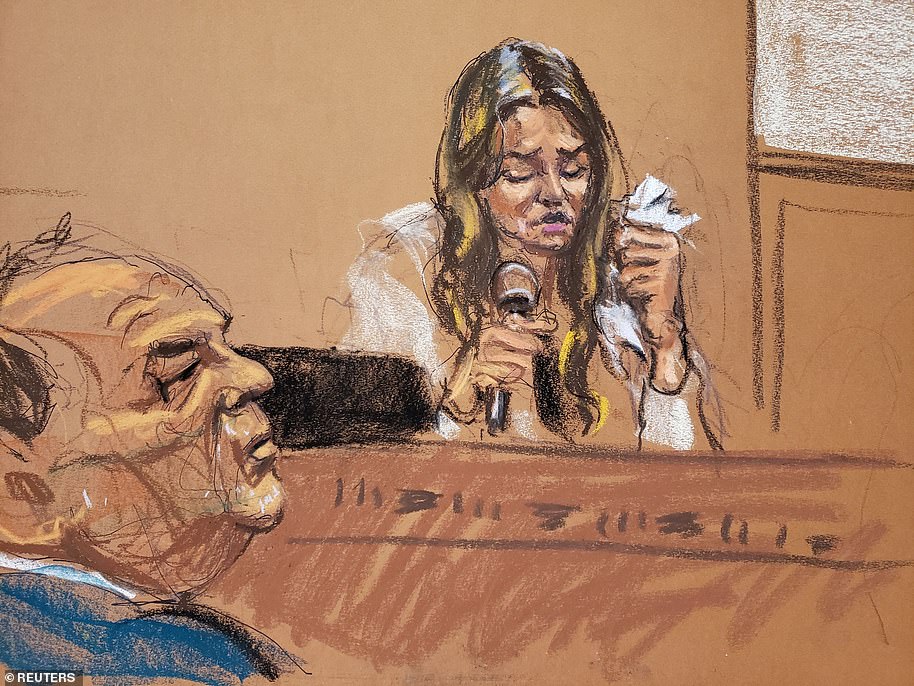 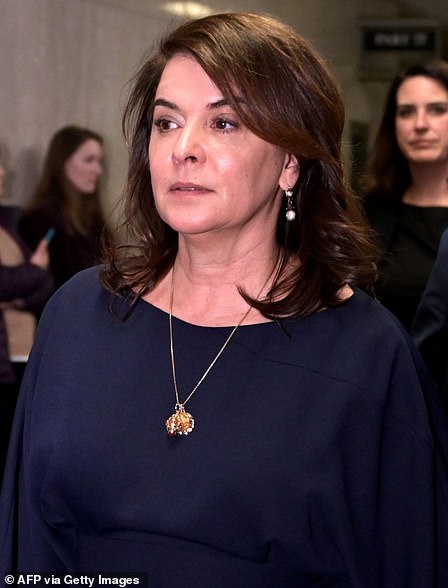 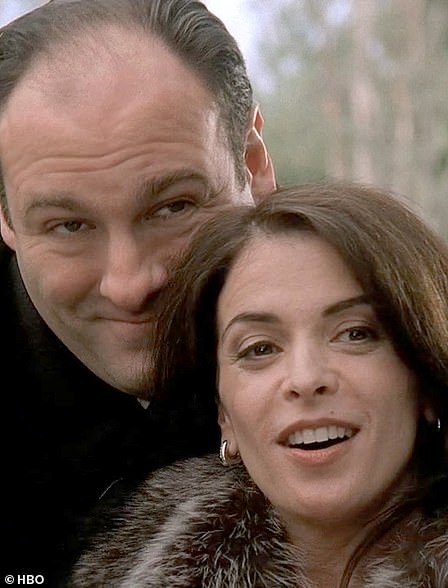 Annabella Sciorra cried as she took the stand in Harvey Weinstein’s New York trial last week to tell how he allegedly raped her in 1993 or 1994. She appeared in The Sopranos as Tony Soprano’s mistress (right)

Who are Weinstein’s accusers who have or will testify?

Actress Annabella Sciorra testified last week against Weinstein, claiming he raped her in her New York City apartment in 1993.

Former production assistant Mimi Haleyi testified Monday and claimed Weinstein forcibly performed oral sex on her inside his apartment in 2006.

A third accuser, Jessica Mann, is slated to testify this week on how the movie mogul allegedly raped her in a Midtown Manhattan hotel in 2013.

Costume designer Dawn Dunning testified Wednesday that Weinstein sexually harassed her and tried to pressure her into having a three-way with him and his assistant when she was 24 at a Manhattan hotel in 2004.

Aspiring actress Tarale Wulff testified Wednesday that Weinstein masturbated in front of her as she was working as a cocktail waitress at Cipriani Upstairs in Manhattan and he later assaulted her in his bedroom in 2005.

The trial started on January 6 and could last until early March.