The Burning Man 2019 festival is more than midway through and revelers have been showing off their incredible metamorphosis-themed costumes, from green luminous bunnies and mythical creatures, to festival desert chic.

Tens of thousands descended on the annual celebration of ‘community, art, self-expression, and self-reliance’ in ‘Black Rock City’ – a crescent shaped campsite constructed by attendees – in the middle of the desert in Nevada.

This year’s theme ‘metamorphosis’ was inspired by Franz Kafka’s novel of the same, where Gregor Sampsa awakens as a ‘giant insect’ and the mythology of ancient Rome. The site describes the balance between ‘reward’ and ‘divine punishment’ during transformation, where in fables ‘luckless heroes find themselves transformed into birds and beasts, trees and mountains, even constellations of stars.’ 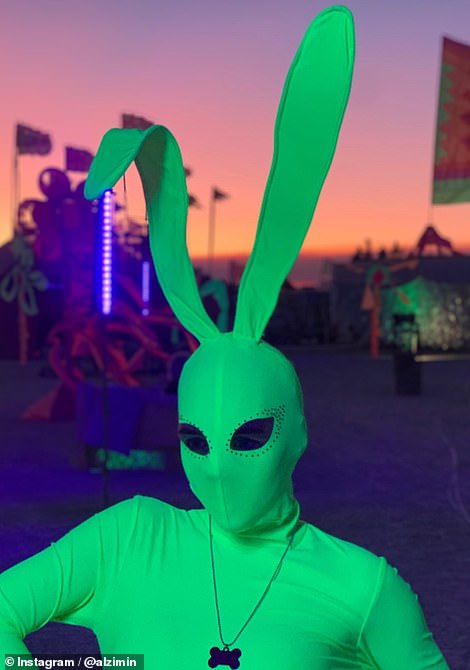 Festival goers wore an array of costumes based on the theme of ‘metamorphosis’ – which took inspiration from Franz Kafka’s novel of the same name. Costumes included hybrid mythological creatures (left) and green glow-in-the-dark space bunnies (right) 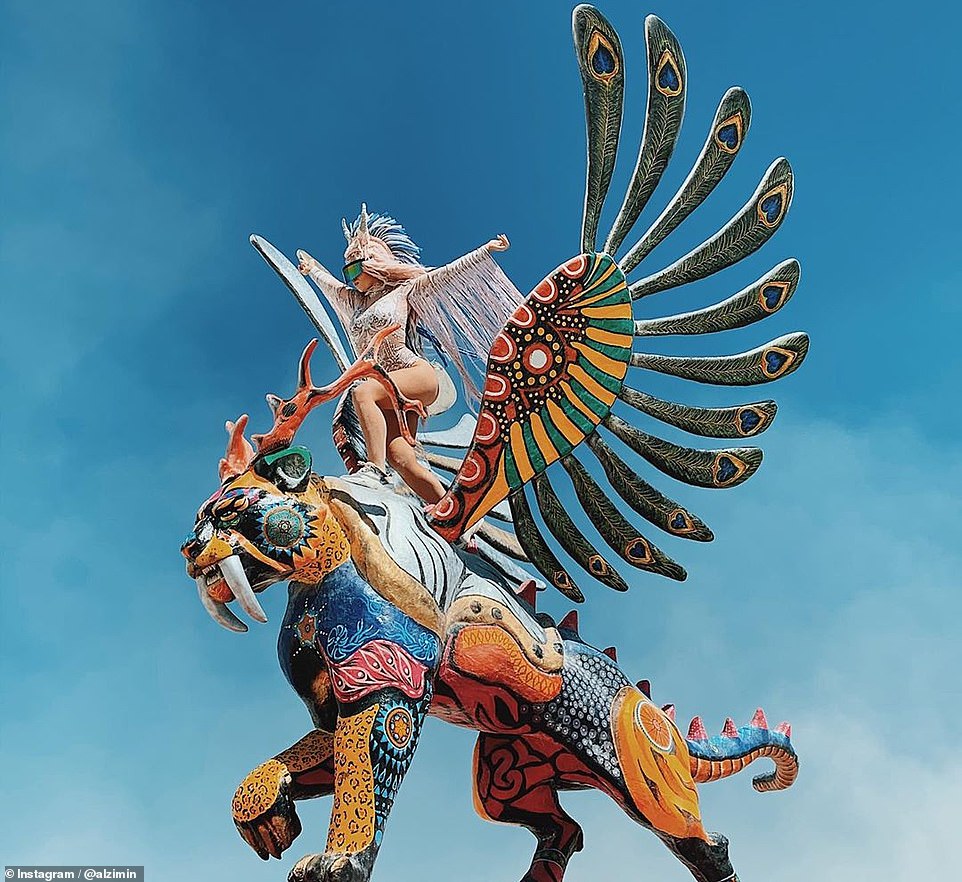 Another attendee (above) stood on top of a hybrid saber-toothed tiger with peacock feathered-wings, fish scales, zebra stripes and more. The festival started on August 25 and will conclude on September 3

One loved-up couple stuck to more glittery and sparkle covered outfits (left). Another chose to replicate a question mark box, as seen in the video game Super Mario Bros (right) 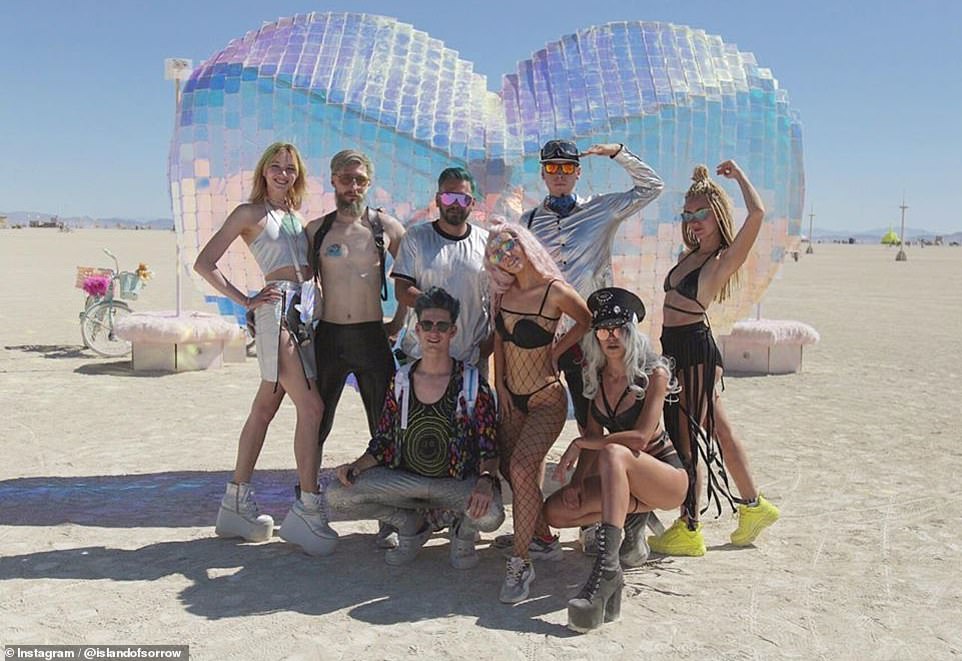 One large group wore an array of costumes. Some scantily clad in fishnet stockings and a skimpy bikini (front, center), another selected a silver costume commonly seen at the festival. Some chose looks more inspired by neo-punk

Reflecting on the feelings of transformation, which many festival goers claim to experience during ‘the burn,’ this year’s event hopes people will reflect on what change they can be in the world rather than a passive observer.

The themes of Burning Man are often interpreted into infamously outlandish, colorful and more often than not scantily clad costumes.

They feature alongside artists who engineer mechanical devices, constructions and art exhibits to match the festivities. This year was no different with footage and photos already emerging online from the center of celebrations – a place that bizarrely enough has little to no phone reception, according to News.com.au.

In footage obtained by DailyMail.com, a man can be seen travelling through the barren sands on a mechanical bug with rotating claw-like legs and in contrast others appear to ride on a multicolored flashing unicorn.

Attendees donned spectacular costumes including a green glowing bunny-morph suit and a woman dressed as a mythical bird with horns, who was then riding on top of what appeared to be a multicolored saber-toothed tiger with wings.

Others could be seen wearing shiny silver dresses similar to a disco ball, fishnet tights with bikinis and some wearing only a skimpy layer of clothing and pasties that sometimes appeared to be made out of black tape.

The site wrote: ‘Transformation happens whether we believe in it or not; but if we have learned anything in our Burning Man experience it is that we do have a say in our own futures, that agency is ours if we choose to pursue it.

‘While we may never know the ultimate outcome, there is a shared belief that our dreams matter, and that together and as individuals we have the power to shape our own stories and transform ourselves in positive ways.’ 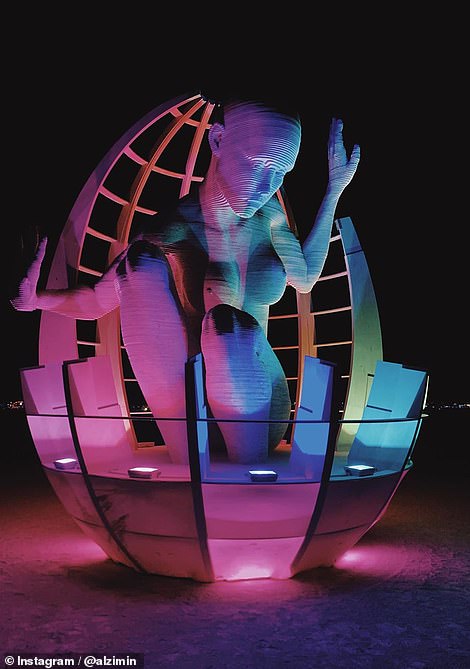 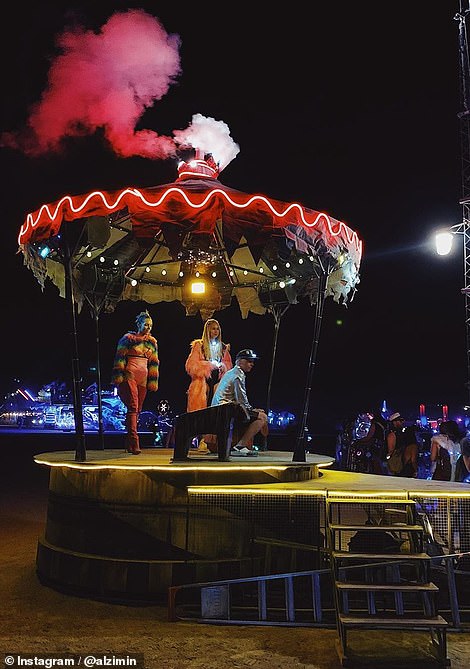 Not just the costumes were outlandish at Burning Man – art installations and structures are common part of festival, including a woman appearing to break out of entrapment (left) and a carnival inspired tent (right). 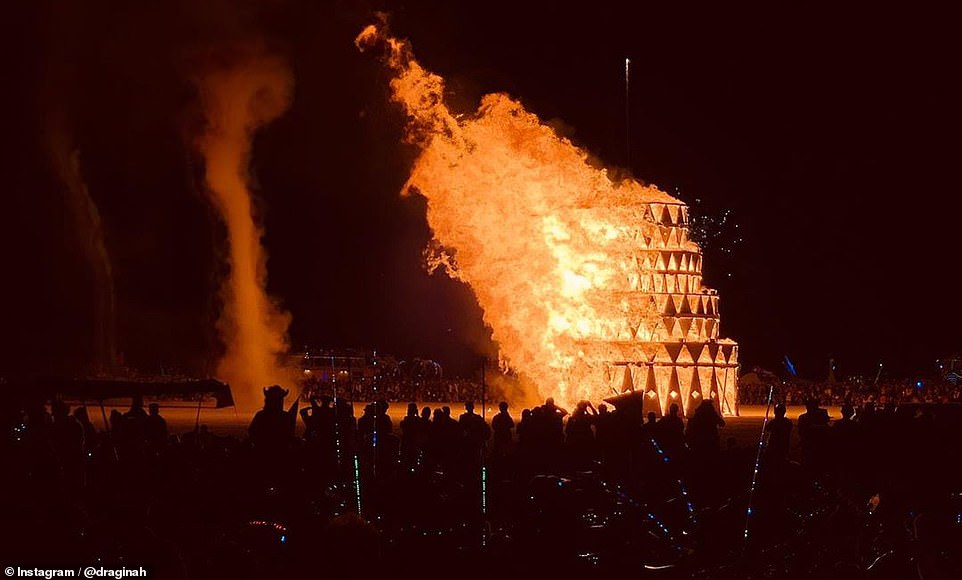 An impressive model was bought to Burning Man and was later torched for the enjoyment of festival goers. At the end of the festival a large effigy representing ‘the man’ will also be set alight, concluding the event 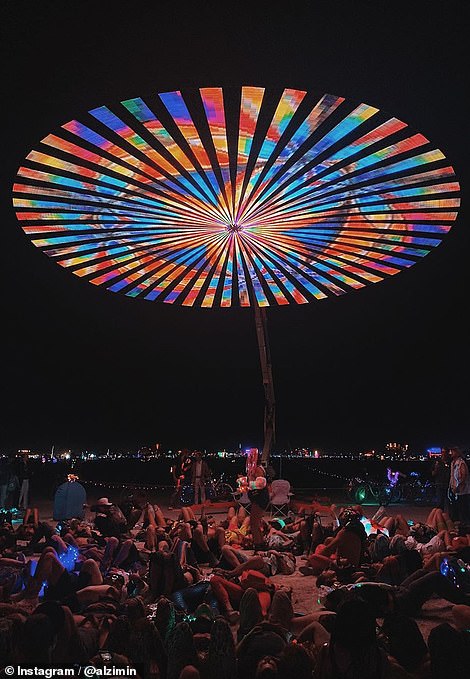 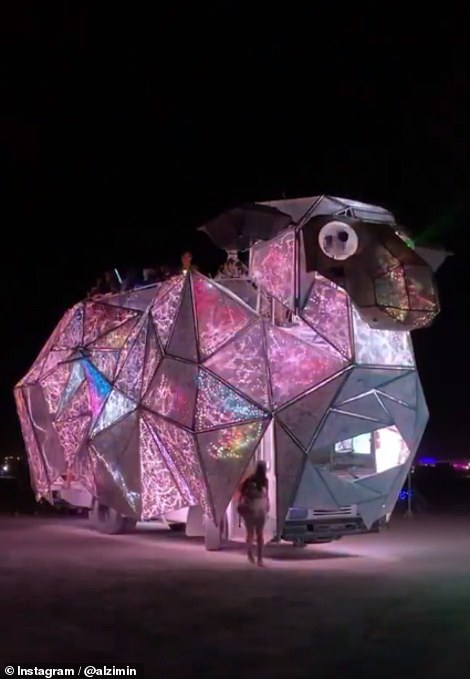 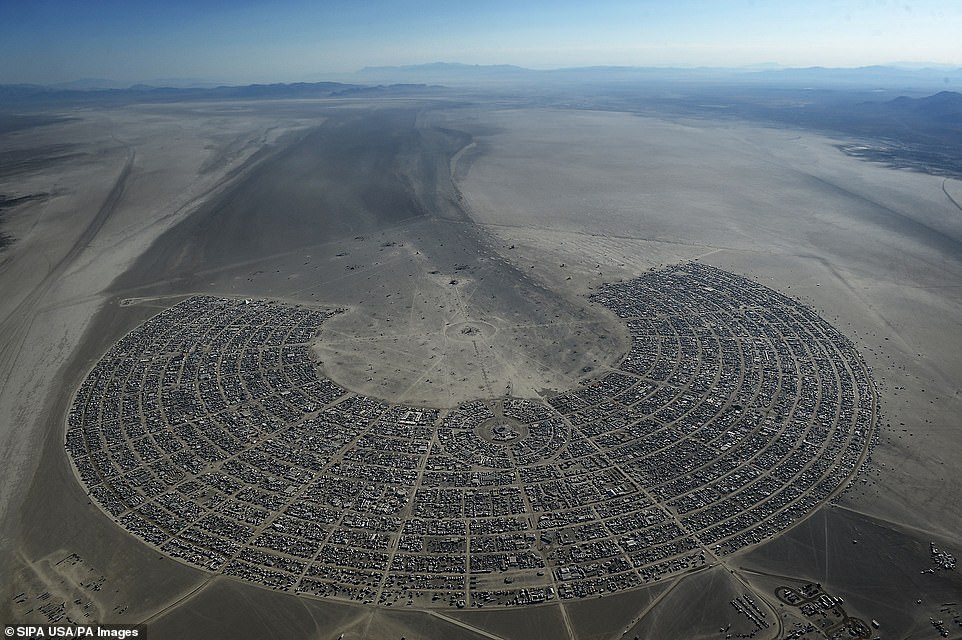 An aerial shot from Black Rock Desert in Nevada (above), during Burning Man. The campsite is made by attendees once they reach the location. There they form a crescent shape before the event begins 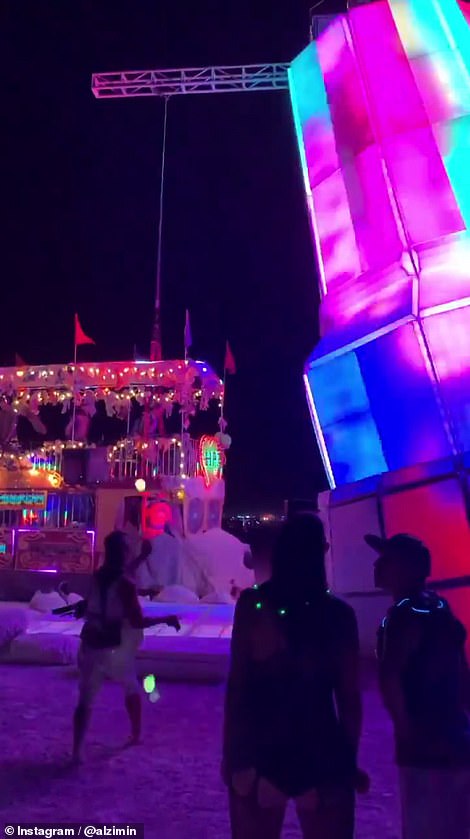 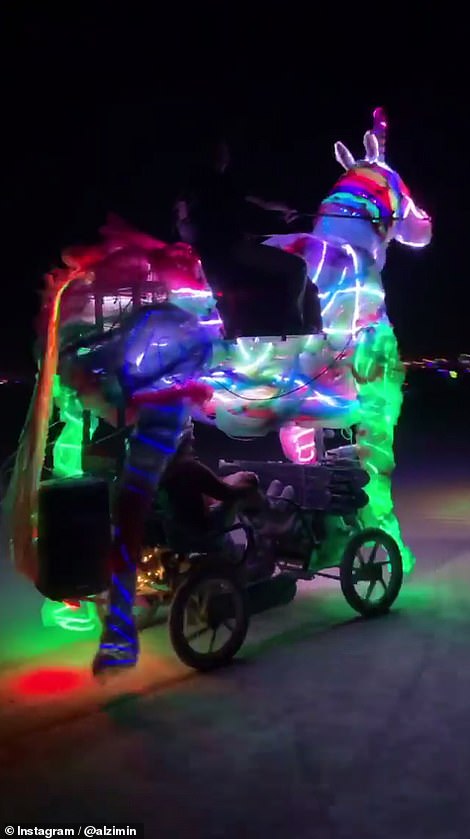 At night time the festival appeared to become a sea of bright glow-in-the-dark paint. Unusual designs and constructions seen earlier in the day appeared to take a whole new appearance at night

Burning Man takes on the persona of world untouched by modern society, asking festival goers to ditch electronics and forget all about money.

The festival doesn’t exchange currency, so people are expected to bring shelter, food, water or any other items they’ll need.

Unfortunately, that doesn’t necessarily mean the event is free.

One such design, called the Temple, was shared on social media and as of three days ago was still raising money to get the sculpture to the desert.

Another shows a stairway to nowhere, a giant sculpture of Pegasus and a giant metal hand flipping the bird. 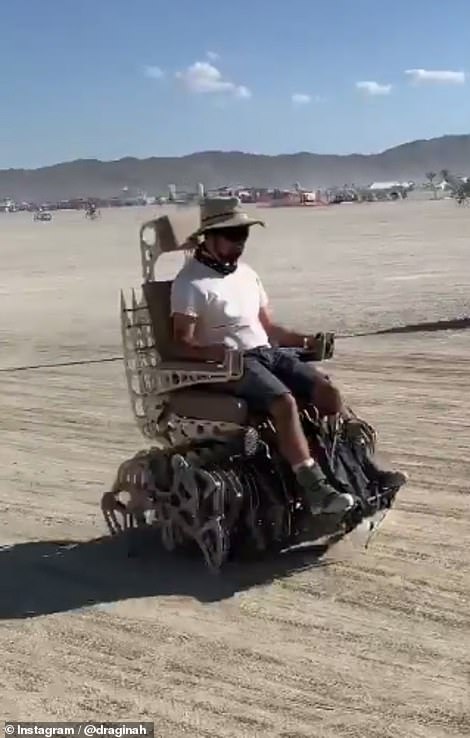 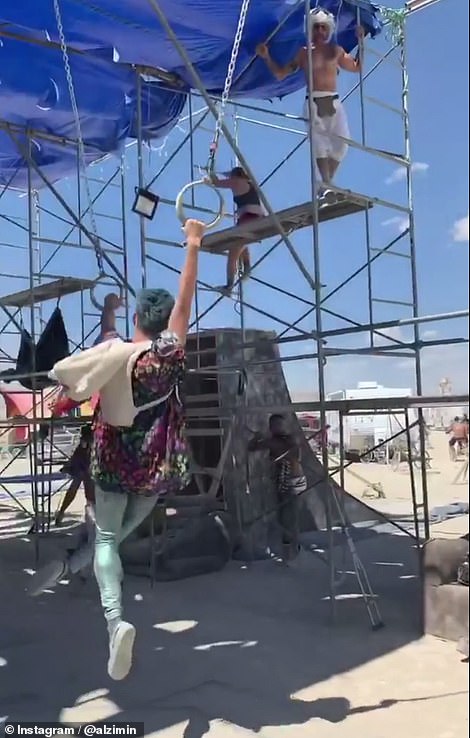 One man could be seen traveling in a metal chair that moved in a manner similar to a bug (left). Elsewhere in the festival grounds people could be seen swinging from metal structures and enjoying playgrounds constructed in the desert (right) 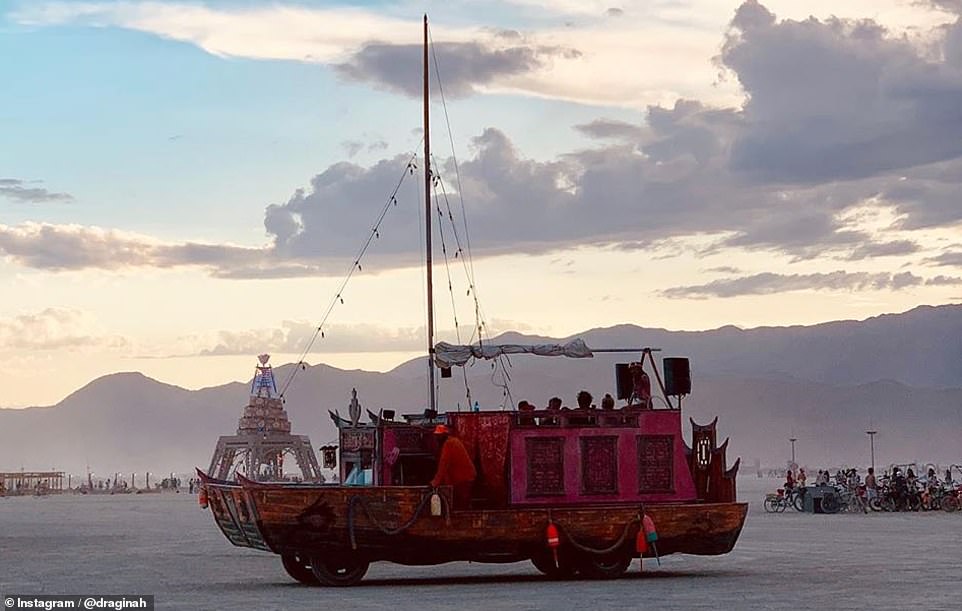 Throughout the day and night people could be seen traveling on unusual vehicles including a pirate ship (above), a wheelchair that crawled like a bug, a multicolored unicorn and more 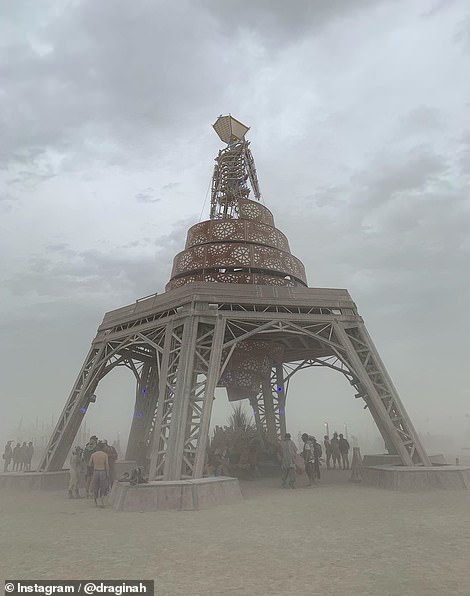 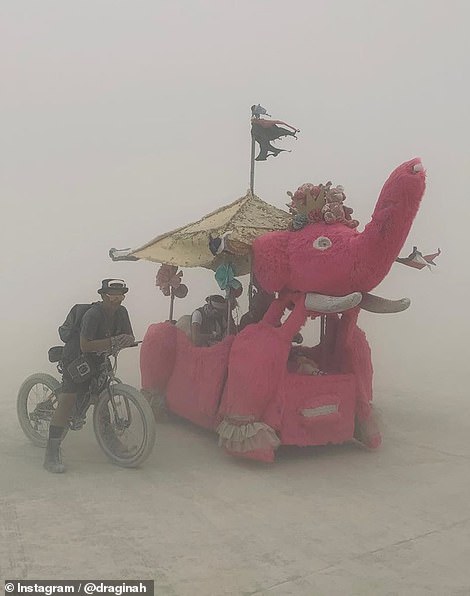 On one particularly dusty day, where the sands raced through Black Rock desert in Nevada, a large metal structure could still be seen that had legs similar to the Eiffel Tower (left) along with other more colorful creations (right) 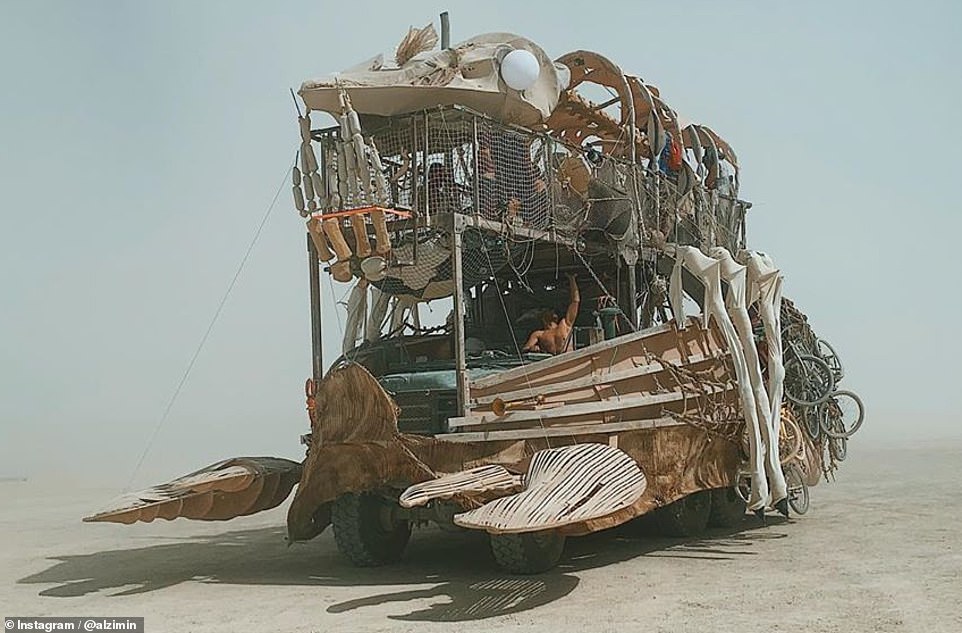 Another impressive construction appeared to have been placed over the top of a truck. It appeared to be a motorized monster with claws, pretend whale bones, netting and more 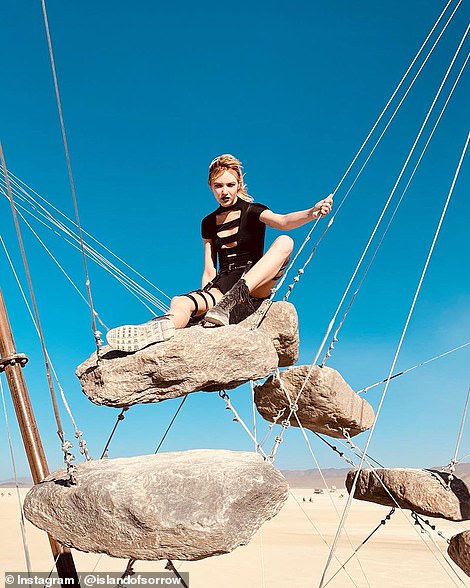 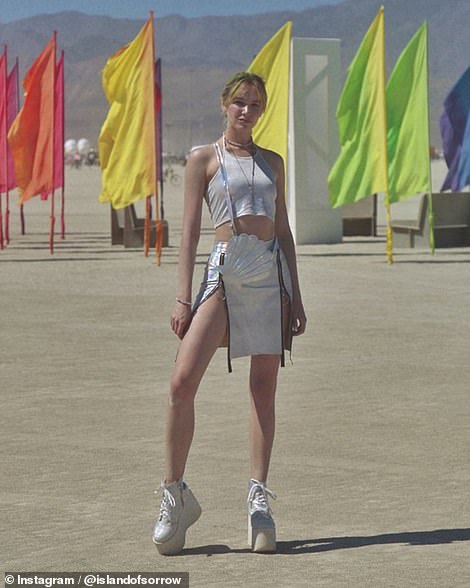 The unusual structures and art installations (left) are located all over ‘Black Rock City’ – the campsite built by attendees in a crescent shape. Much of the scenery allows for an interesting contrast in photos with colorful outfits playing off the dull colors of the sand

The festival this year appeared to go off without a hitch, with organizers updating travel time regularly on Twitter and estimating a wait time of under an hour.

While there have been concerns in the past about the amount of sand in the area, the Associated Press reported that dust posed no serious health concerns

Like always, people showed up dressed in their most outlandish and eccentric outfits to frolic in.

The festival is set to happen over the course of eight days, from August 25 to September 3. 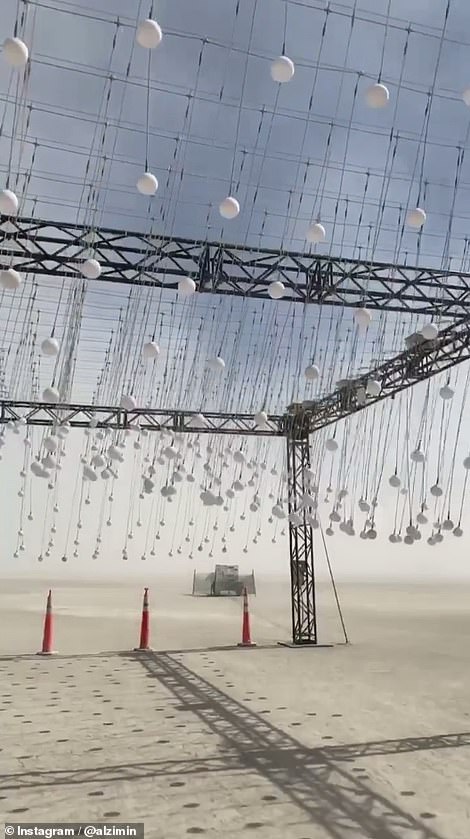 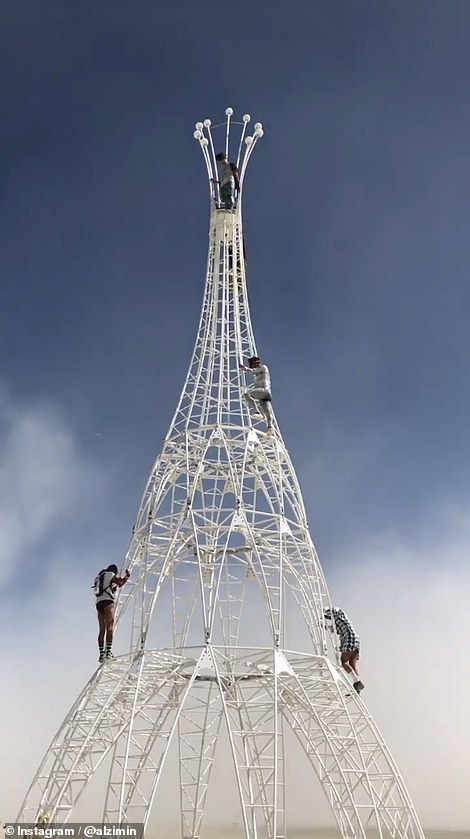 Artists spend months and sometimes the whole year creating structures and installation pieces ready to be taken to the Burning Man festival (above). Here is one group climbing on a piece which they appear to be helping to secure in place 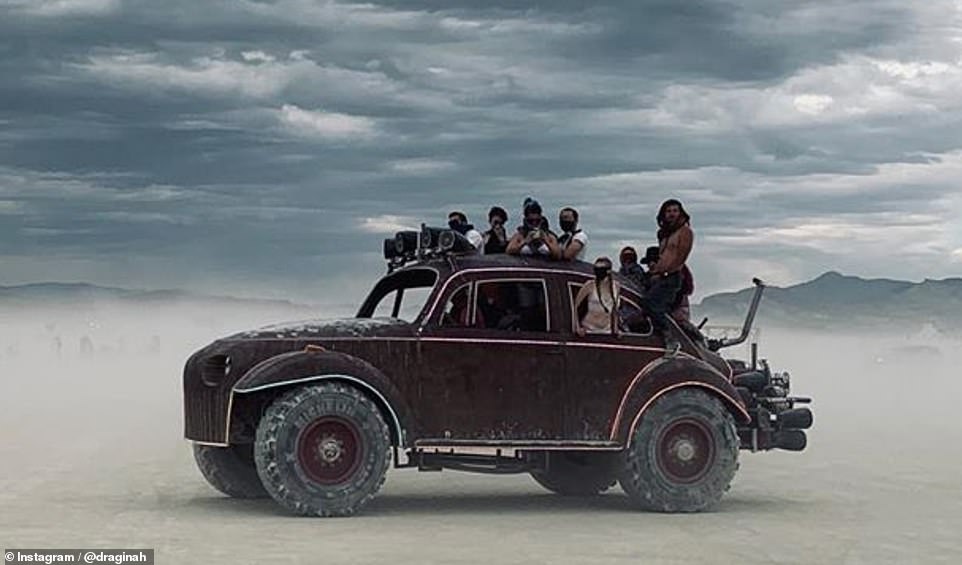 Many believe the festival takes influence and inspiration from ‘neo-punk’ styles and films including Mad Max: Fury Road 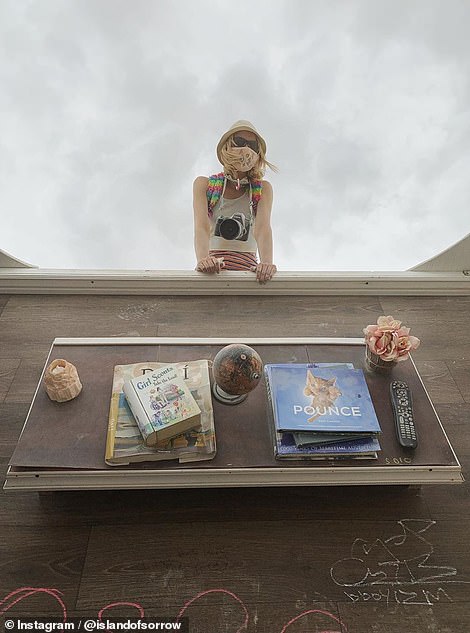 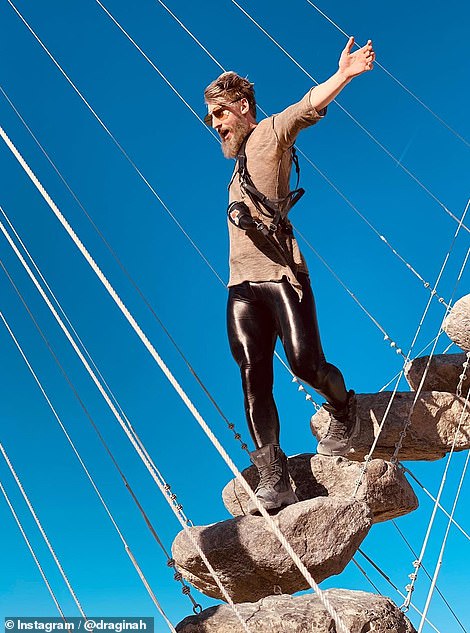 The festival runs from August 25 – September 3 and sees tens of thousands of people flock there from all over the world. At the event no money is exchanged, people are expected to bring what they need to survive and trade for other items