Wisconsin voters began their chaotic – and potentially life-threatening – march to the polls Tuesday after a bitter partisan clash resulted in in-person voting as scheduled with no extension of absentee voting despite the pandemic.

State voters faced long lines up at polling places, spaced with several feet between them seeking to avoid transmission of the coronavirus, amid warnings from Democrats and some election officials that voting should be delayed.

Many wore face masks as they waited to cast their ballots in a state that has featured bitter partisan divisions. Thousands of poll workers, many of them elderly, dropped out citing concern for their own safety. National Guard members helped fill the breech.

Democrats tried to extend mail-in voting, but were blocked by Republicans.

‘Good morning and welcome to the S*** Show!’ Barnes Tweeted at the start of in-person voting. ‘Today’s episode has been produced by the Supreme Court and directed by the incomparable Speaker and Senate Majority leader duo,’ she added.

The election took place even though Wisconsin, like most U.S. states, has imposed a stay-at-home order on its residents. In Milwaukee, there were just five polling stations – down from 180.

More than a dozen other states have postponed their elections in the face of the COVID-19 pandemic, which has transformed Americans’ daily lives and plunged the economy into an apparent recession. 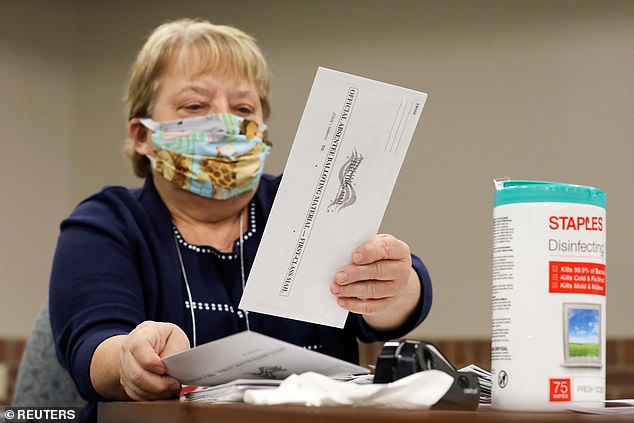 Election volunteer Nancy Gavney verifies voter and witness signatures on absentee ballots as they are counted at the City Hall during the presidential primary election held amid the coronavirus disease (COVID-19) outbreak in Beloit, Wisconsin, U.S. April 7, 2020. The political fight foreshadows a clash over absentee voting in November 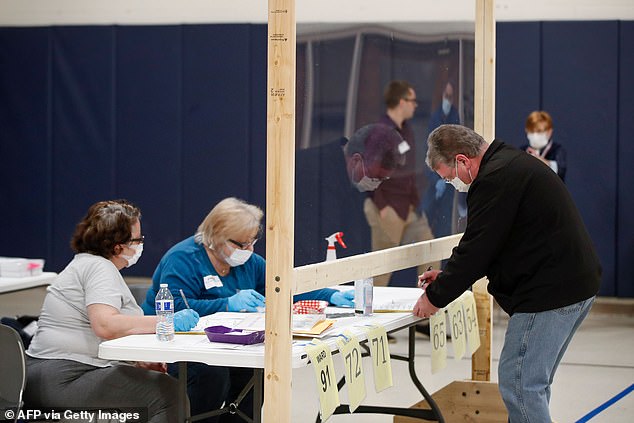 A man checks in to cast his ballot in at a Democratic presidential primary election at the Kenosha Bible Church gym in Kenosha, Wisconsin, on April 7, 2020 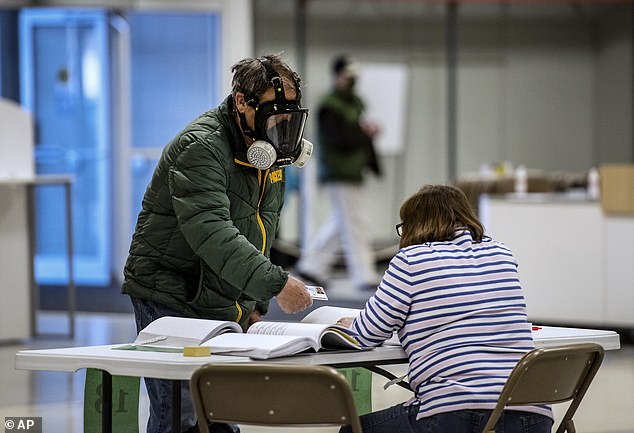 Robert Forrestal, left, wears a full face chemical shield to protect against the spread of coronavirus, as he votes Tuesday, April 7, 2020, at the Janesville Mall in Janesville, Wis. 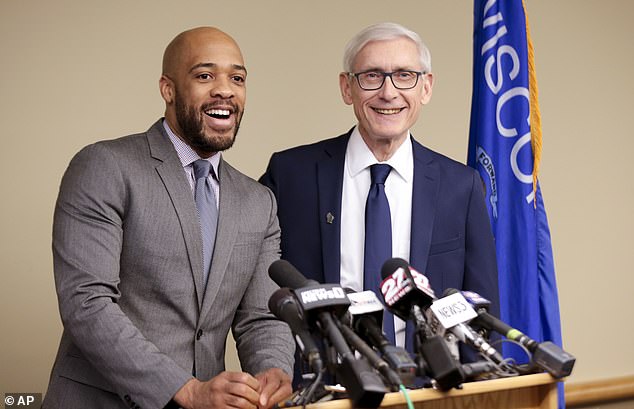 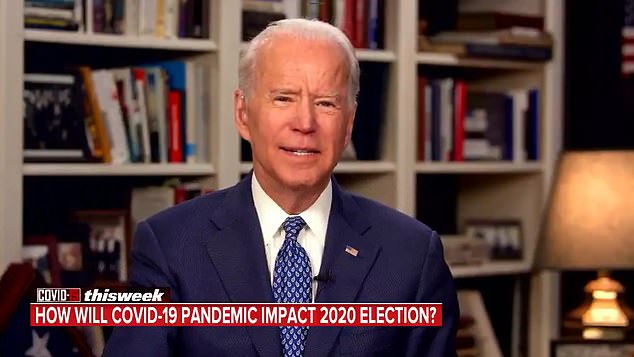 In deciding separate lawsuits brought by Republicans, the state Supreme Court blocked Democratic Governor Tony Evers’ order to delay the election until June and the U.S. Supreme Court overturned a federal judge’s decision extending absentee voting, instead ruling ballots must be postmarked by Tuesday to be counted.

‘Now voters will be forced to choose between their health and their right to vote, an untenable choice that responsible public officials tried to avoid,’ said Satya Rhodes-Conway, the Democratic mayor of Madison, Wisconsin.

More than 2,400 people in Wisconsin were infected as of Monday, according to a local CBS affiliate.

The angry clash over voting procedures foreshadowed certain drama in November. President Donald Trump has already attacked mail-in voting as insecure, even many states already allow it. ‘I think a lot of people cheat with mail-in voting,’ Trump said at the White House days ago.

His expected rival, former Vice President Joe Biden, has said there may need to be increases in mail-in voting.

More than half of Wisconsin’s municipalities reported shortages of poll workers, prompting the Midwestern state to call up 2,400 National Guard troops to assist.

The legal maneuvering overshadowed the Democratic presidential primary in Wisconsin, the first nominating contest held since March 17 in the race to pick a challenger to Trump for the Nov. 3 election. The outbreak has pushed front-runner Joe Biden and rival Bernie Sanders off the campaign trail.

Former Vice President Biden has built a nearly insurmountable lead over Senator Sanders in the delegates who will pick the nominee at the national convention this summer. The convention, scheduled to be held in Milwaukee, Wisconsin, has been postponed to August from July by the pandemic.

After a late-night meeting on Monday, the Wisconsin Elections Commission said no results of Tuesday’s voting would be released until April 13, the deadline for absentee ballots postmarked by Tuesday to be received.

“I’m sorry, I wish I had the authority to protect us from this,” she wrote on Twitter.