Sainsbury’s should warn people to cut the tops off its ‘well-fired’ loaves of bread because they contain a cancer-causing chemical, experts have claimed.

The loaves, which have a ‘unique’ blackened crust, have been criticised by the Chartered Institute of Environmental Health (CIEH).

They could contain higher than usual levels of acrylamide, a chemical in burnt food which can build up in the body to increase the risk of cancer.

‘They should really come with a health warning,’ said Tony Lewis, head of policy at the CIEH.

Sainsbury’s has reportedly been selling its well-fired loaves of bread since the 1980s, but health experts have warned the black crust could contain a carcinogenic chemical

Guidelines released earlier this year by the British Hospitality Association said over-cooked bread should be thrown in the bin and not served to the public.

And the EU last year brought in a rule saying food companies could be disciplined if they don’t take steps to stop selling burned bread or potatoes, The Telegraph reports.

But Sainsbury’s continues to sell its 75p well-cooked loaves, which have been available since the 1980s and have, in the past, been accused of just being burnt.

‘We are firmly of the view that we waste too much food,’ said Mr Lewis.

‘So we do have some support for the idea of selling well-fired bread, which has perhaps been accidentally burned and would otherwise be wasted.

‘But that said, if you are going to buy the well done bread, there is some simple advice which you should use, which is don’t consume the outside crust because of the risk of acrylamide risk. 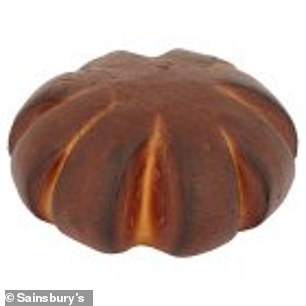 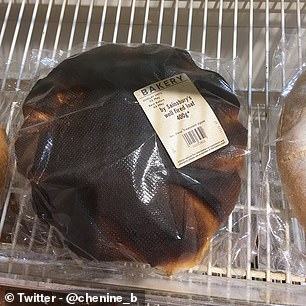 The loaves’ selling point is their over-cooked ‘unique’ crusts, but the blackened edge could contain acrylamide, which can build up in the body over time and increase the risk of cancr

‘If Sainsbury’s are going to sell these loaves they should really come with a health warning telling people to cut the top off.’

Acrylamide is a chemical produced by a chemical reaction when certain foods are baked, fried, grilled, roasted or toasted for too long.

If eaten regularly the chemical can build up in the body over a long period of time and increase someone’s risk of getting cancer.

Foods which can produce high levels of acrylamide when burned include potatoes, other root vegetables such as parsnips and carrots, and bread.

The Food Standards Agency (FSA) advises people not to toast bread beyond a golden colour – darker foods are thought to contain more of the chemical.

Sainsbury’s said in a statement: ‘Our well fired loaves are popular and we can reassure customers that the acrylamide levels are low and well within the FSA benchmark levels.’

And an FSA spokesman said the company didn’t appear to breaking any rules.

A leading statistician said last year ‘there is no direct evidence that anyone has ever got cancer because of acrylamide’.

Sir David Spiegelhalter, a Cambridge University statistician, said even adults who consume the greatest amount of acrylamide are nowhere near risk.

Studies on the carcinogenic have only been conducted on mice, and its effects on humans is relatively unknown, he added.

Cancer Research UK said on its website: ‘Evidence from animal studies shows that acrylamide has the potential to interact with the DNA in our cells, so could be linked to cancer.

‘However, evidence from human studies has shown that, for most cancer types, there is no link between acrylamide and cancer risk.’

On its website it also warned of ‘weak and inconsistent’ data regarding a higher risk of womb cancer.

While it said ‘even food industry workers, who are exposed to twice as much acrylamide as other people, do not have higher rates of cancer.’

The International Agency for Research on Cancer Group, a branch of the World Health Organization, lists the chemical as a probable human carcinogen.

Popular breakfast cereals, crisps and even food designed for babies and toddlers have raised levels of a cancer-risk chemical, food watchdogs revealed in June.

Fifteen samples of products bought on UK high streets had raised levels of acrylamide, which is formed in the baking, roasting, frying and toasting of starchy foods.

Higher levels were found in a pack of Honey Monster Puffs, previously known as Sugar Puffs, and a Hovis loaf of brown bread with added wheat flakes.

Crisps have a particular problem with acrylamide and raised levels of the chemical were found in packs sold under the Seabrook, Burts and Snackrite brands.

The details have been revealed by the Food Standards Agency, which has advised Britons to reduce consumption of acrylamide on the basis of cancer concerns raised by the World Health Organisation.

Previously, the FSA has run into controversy after issuing warnings against eating crispy roast potatoes and burned toast, which are known to carry higher levels of the chemical.

It has advised family cooks to ensure such foods are no darker than a golden yellow.