A wellness guru who counts Meghan Markle among her fans has revealed how she’s set up her own centre in London that’s predicted to have a £1million turnover in the next 12 months.

Sasha Sabapathy, 29, who is based in London, launched Glow Bar after quitting her high-flying job in New York due to being ‘over-worked and over-partied’.

The entrepreneur described how she began struggling with ‘really bad anxiety’ and was depressed, with doctors quick to suggest medication.

However, Sasha decided to take a different approach after a friend suggested she try a herb called ashwagandha – which she found ‘really helped’ with her mental health.

From there, she began mixing her own herbal supplements in her kitchen, launching her first products in February this year – and the Duchess of Sussex has previously been reported to be a fan of Glow Bar’s Ashwagandha elixir.

Sasha Sabapathy, 29 (pictured at Glow Bar) has revealed how she’s launched her own wellness brand, which is set to make a turnover of £1million in the next 12 months

Speaking to FEMAIL, Sasha explained how she first became interested in herbal remedies while working as a digital marketing strategist in New York.

‘I worked hard, played hard, and I crashed,’ she said. ‘I was exhausted, I’d got really bad anxiety and I was depressed. I was having these panic attacks on the street.

‘American doctors are very quick to prescribe anti-depressants but a friend of mine had told me about ashwagandha, which is now one of the herbs we sell.

‘I found it actually really helped. Within two to three weeks, a lot of anxieties were subsiding. 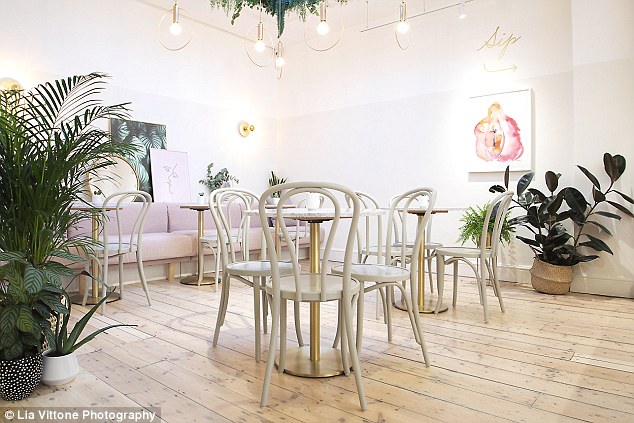 The new Glow Bar space includes a cafe area (pictured above), where a variety of healthy drinks and snacks are on offer

‘II was feeling much calmer, and like the clouds had lifted. I was getting out of bed a lot easier.’

Sasha became interested in ayurvedic herbs, which are used in traditional Indian medicine, and began blending various powders in her kitchen and mixing the supplements into her smoothies.

‘At first, I was taking eight different pills a day, and it just felt so medicinal. So I started blending them in a mason jar,’ she explained.

‘It was so I could get them all in a smoothie in one go. But it was super messy, and I didn’t want all these paper bags in my kitchen.

‘I kind of realised there was a huge gap in the market for something that could speak to consumers in the UK in a way that was accessible about how you can use ancient healing methods in modern times.’ Sasha counts Meghan Markle (above) among her fans, with the Duchess known to take the ashwagandha supplement

Sasha began taking a herb called ashwagandha after feeling anxious and depressed while working in New York. It is now one of the supplements that Glow Bar sells (above)

At this point, Sasha decided to conduct a survey of millennial women, and discovered many of her peers were feeling stressed, struggling with a lack of energy and sex drive, and also bad skin.

She began blending various herbs in order to create remedies for these issues, ending up with her first three Glow Bar products – Super Happy, Super Sexy, and Super Glowy – which are mixed into hot drinks.

‘I had a spreadsheet with every herb known to man on them to see what worked.’ 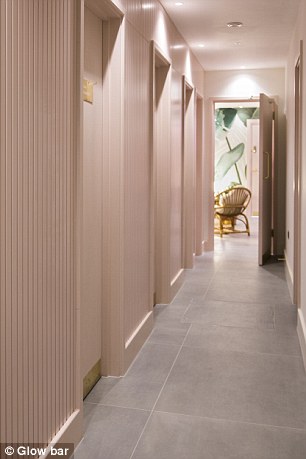 But Sasha felt there needed to be somewhere for people to try out these products – coming up with the idea of creating London’s first wellness space.

‘What women really need is a place where they feel relaxed and safe, and can experiment with their products, and holistic treatments,’ she said.

‘We started thinking about creating London’s first self-care centre. I wanted it to feel very feminine, a safe haven for women to escape to.’

The beautifully-decorated Glow Bar, located Fitzrovia – painted in a very on-brand millennial pink – opened to the public this week, offering a place for women to ‘sip, sweat and shop’.

It includes a cafe area serving up plenty of healthy drinks and snacks, as well as infrared sauna pods on offer. 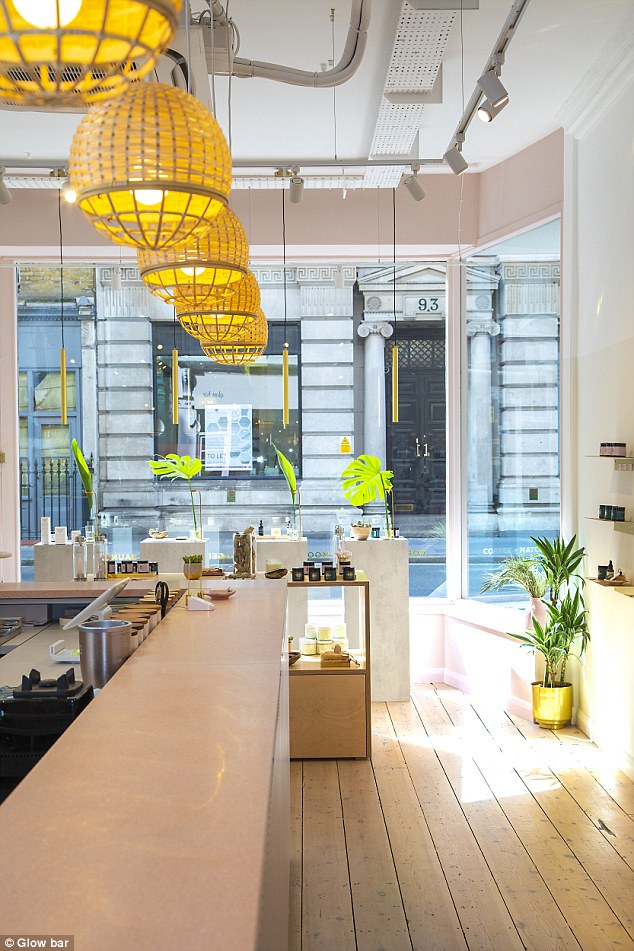 Sasha explained she wanted to create somewhere for people to try out her products. Pictured is the retail space at Glow Bar 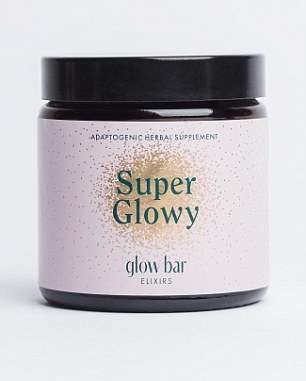 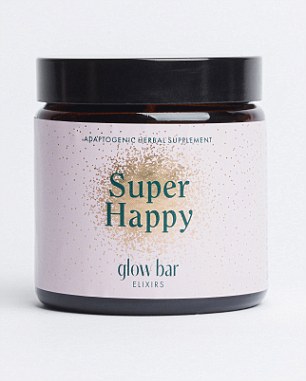 The Glow Bar supplements include Super Glowy (left), designed to help your skin, and Supper Happy (right), designed to improve your mood. Both are priced at £32.50 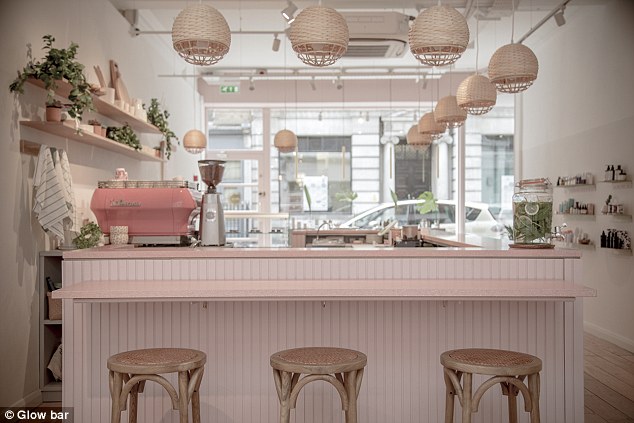 The new wellness space, located in Fitzrovia, includes a cafe area (above), where healthy drinks and snacks are on offer

As well as stocking her own herbal supplements, Sasha has curated a selection of other beauty and wellness products, many of which have been created by young female entrepreneurs.

‘I’m big on women. I’m all about girl power,’ she explained.  ‘A lot of people told me if I was all about women I would lose a lot of customers.

‘But I created this brand because I wanted a brand that related to my friends.’

Sasha’s desire to support other women appears to fit in with the feminist outlook of one of her most famous fans, the Duchess of Sussex.

Meghan, 37, is a fan of Glow Bar’s Ashwagandha elixir, and has previously spoken about how she takes the herb in the past.

Sasha said: ‘It was cool to hear that [Meghan] shares the same philosophy as us. The wellness space also includes infrared sauna pods (above), which can be booked for 45-minute long sessions

‘She’s the epitome of health, she’s got beautiful glowing skin, her eyes are shining all the time. She’s such a babe, I love her.’

Famous clients aside, Sasha clearly has big plans for Glow Bar – which is on track to make a turnover of nearly a £1million over the next 12 months.

‘We definitely want it to grow big; we feel like it’s something that’s so important in today’s climate,’ she said.

‘I believe there is a place in the market for a more relaxed wellness brand. I’ve already had so many customers who email me and say you’ve changed my life.

‘Wellness can be a bit preachy; it can make you feel bad if you don’t do a certain thing. We’re about self-love, and looking after yourself, and loving yourself for who you are.’