Welsh farmer who hanged his sheepdog jailed for 18 weeks

A farmer who killed his sheepdog because he didn’t round up his flock of sheep properly has been jailed for 18 weeks.

Graham Thomas, 55, attached a piece of 20ft rope around Prince’s neck and hanged him from a large tree on his farm in South Wales.

Witnesses described seeing Thomas shouting and swearing at the Welsh border collie in the moments before he was killed.

A vet told jurors at Newport Magistrates’ Court this week the hanging would have caused the animal ‘great fear, distress and clear unnecessary suffering.’

Cruel: Farmer Graham Thomas, 55, denied killing Prince, pictured above, and insisted the animal had managed to climb the tree and twist the rope around his neck

Thomas pleaded not guilty and claimed the black and white hound had managed to climb up the sapling himself while twisting the rope around his neck in the process.

He claimed Prince was dead by the time he tried to help at the farm in Rhymney, South Wales.

The jury at Newport Magistrates’ Court did not fall for his story however, finding him guilty  following a trial this week.

Newport Magistrates Court heard that the RSPCA spoke to an expert vet who said that Thomas’ story didn’t add up.

Thomas, of Tredegar, Blaenau Gwent, South Wales, denied the offence under the Animal Welfare Act, but was found guilty after trial. 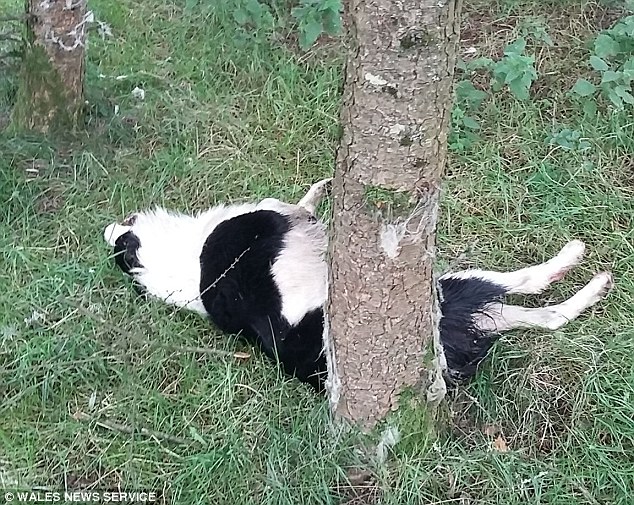 Guilty: The jury didn’t believe Graham Thomas’s story and found him guilty of causing ‘unnecessary suffering’ to the sheepdog, pictured deceased above 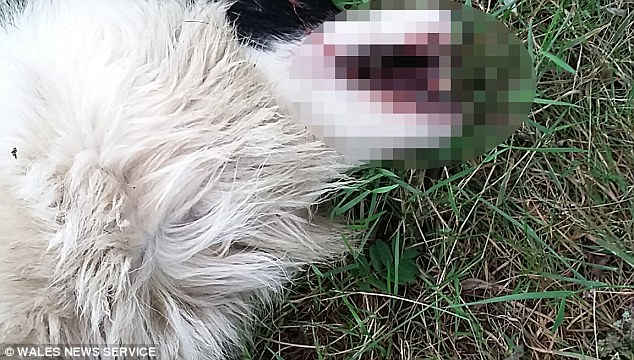 The court heard that it was one of the ‘clearest’ acts of cruelty that had been encountered and was so serious that only custody could be justified.

He was jailed for 18 weeks for causing unnecessary suffering.

He was banned from keeping dogs and sheep for life.

RSPCA inspector Emma Smith said: ‘This is such an unusual and disturbing case where a sheepdog was killed by his owner allegedly because he wouldn’t round up his sheep properly.

‘Prince would have suffered immensely which resulted sadly in his death. This deliberate cruelty is just so horrific to fathom. Following the incident his body was then removed by the defendant and burnt.

‘It must have been extremely distressing for the witnesses to have seen this. We are very grateful to them for reporting it to us and assisting with our investigations.’