Stacey Keeble, 29, from Milford Haven in Wales, had gone to the house of close friend Stacey Phillips, 29, to enjoy a night in her hot tub.

But a steamy row erupted when Keeble lost her cool and started hitting her friend of 15 years in the face.

Stacey Keeble, 29, from Milford Haven in Wales, had gone to the house of close friend Stacey Phillips, 29, to enjoy a night in her hot tub

Haverfordwest Magistrates’ Court heard Miss Phillips suffered a cut on her forehead, grazes, bruising and had six stitches on the side of her head.

After the attack, Keeble went home in her swimwear in the early hours of the morning and left the house without her belongings.

The court heard the trouble erupted when the party moved to a hot tub in the neighbouring garden.

Keeble became upset and wanted to leave so Miss Phillips tried to comfort her over the garden fence.

But Keeble would not calm down and started hitting her friend, the court heard. 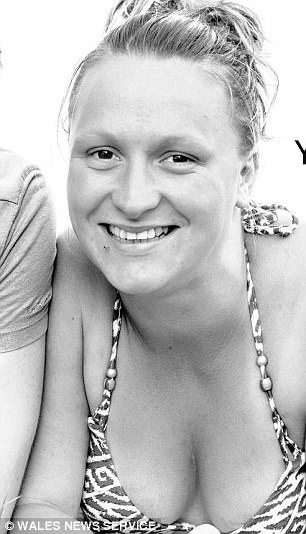 Vaughan Pritchard-Jones, prosecuting, said: ‘The defendant pulled her in to the fence and immediately seemed to lose control and started to hit her in the face with the hand holding the mobile phone.’

Witnesses said Miss Phillips was hit nine or ten times and her children, who had woken up, were distressed to see their mother with blood all over her face.

Jonathan Webb, defending, said Keeble had consumed three drinks between 6pm and the incident at 2am – and was ‘in essence, stone-cold sober.’

He said: ‘Miss Keeble and her partner found themselves in a situation that they were not comfortable with at all.

‘Both wanted to leave as soon as possible.’

She received an 18-month community order with a 25 day rehabilitation activity requirement.

Keeble also has a nine week 8pm to 7am tagged curfew, was ordered to pay £250 compensation to the victim and £170 in costs.