A single mother was threatened with being reported to social services because she was late paying her kid’s £13 dinner money.

A letter sent to the mother said failing to settle the bill or provide a packed lunch instead would be seen as a ‘child protection concern’.

The mother, who asked not to be named, said the letter from Denbighshire council’s school meals service was ‘outrageous’ and ‘criminalised poverty’.

The self-employed parent, who shares the cost with her ex-partner, said although payment of the bill was late this time, they always cleared their debt. 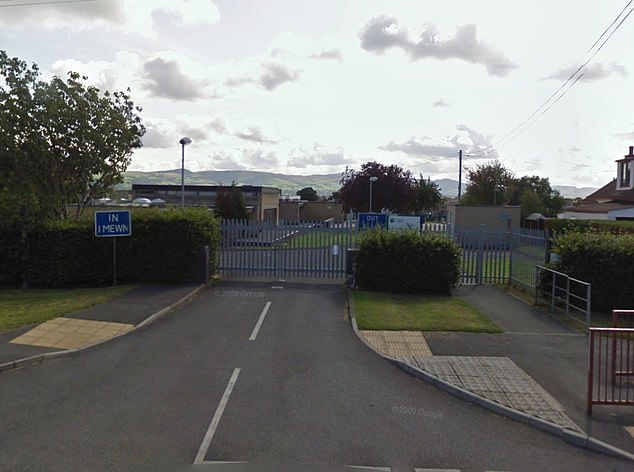 The parent’s child is a student at Twm o’r Nant School (pictured) in Denbigh, north Wales. School meals in Denbighshire cost £2.20 per day

The mother said: ‘I was seriously shocked to receive the letter and what angered me most was the tone of it.

‘It could’ve been worded very differently without the threat to report me to social services. It’s like criminalising poverty. Fair enough, we owed the money.

‘The dinner bill has to be coordinated between two separated parents and it can be difficult keeping track, but we always pay it.

‘There are many people in financial difficulty in Denbighshire. I am on a low income myself, but my children are not entitled to free school meals.’

The parent’s child is a student at Twm o’r Nant School in Denbigh, north Wales. School meals in Denbighshire cost £2.20 per day.

Once a parent’s bill reaches £20, the council’s policy is that children will not be given a meal until the debt is paid in full, although a basic sandwich will be provided.

For a child to qualify for free school dinners, parents or guardians must be in receipt of certain benefits.

The letter sent to the parent read: ‘Should you fail to pay for your child’s meals or provide them with a packed lunch, this will be highlighted as a child protection concern.

‘An instant referral will be made to Denbighshire’s Social ServicesChildren’s team, who will then carry out an investigation into the circumstances around the lack of provision of food.’

The parent added: ‘Working poverty is a big issue in our area. What is also shocking is that if you don’t pay the bill, your child would only be given a basic sandwich and then they get stigmatised.

‘The parent’s financial status is not the child’s fault.

‘I’m really low-waged and there are lots of parents in the same situation, you only have to look at how many working families are turning to food banks, but to be threatened to be reported to social services when you’re only trying your best is absolutely outrageous.’

A spokesperson for Denbighshire Council said: ‘The welfare of our pupils is paramount and it is imperative that they either receive a school meal or a packed lunch.

‘Parents or guardians who are in arrears with their school meals, receive an initial letter outlining the amount of the debt and offers parents a variety of ways to pay including a payment plan, if they are struggling financially.

‘They are also given the opportunity to provide their child with a packed lunch until the arrears are met.

‘If they fail to pay on this occasion, they receive a second and final letter, reminding them about the outstanding amount.

‘Most parents pay upon receipt of the first letter. Our aim is to avoid escalation of debt problems within families that may already be struggling.

‘The letters have been in our Debt Policy since 2016 and were reviewed with head teachers and school business managers.’