The Football Association was under mounting pressure last night to abandon plans to sell Wembley Stadium – the ‘crown jewel’ of the English game – to an American football tycoon.

Kate Hoey, the former sports minister who oversaw plans to rebuild Wembley, said it would no longer be England’s national stadium if the deal goes ahead.

She added that if it is sold, the new owners should reimburse the £161million put in by taxpayers and National Lottery entrants, and pay an extra premium to take into account the stadium’s increase in value.

It also emerged last night that London Mayor Sadiq Khan has instructed lawyers and officials to see whether the capital can get back the £21million it gave to the project.

Shahid Khan, the US owner of the gridiron football team the Jacksonville Jaguars as well as Championship football club Fulham, is believed to have offered the FA around £600million in cash for the stadium and future hospitality rights from matches and concerts worth another £400million.

But ex-England midfielder Peter Reid said: ‘There are some things this country should never sell, like the Crown Jewels – and Wembley is English football’s crown jewel.’

Former England goalkeeper Peter Shilton, who holds the record for playing more England games than anyone else, with 125 caps, said: ‘It is irreplaceable. You cannot replace what Wembley is and what the place means to so many.

‘The memories go through the generations. Dads tell stories to their children of what Wembley means to them and they pass it on in the future.’ He added: ‘It might feel like a lot of money but we will be selling the heritage of our game. That’s why I’m against it. 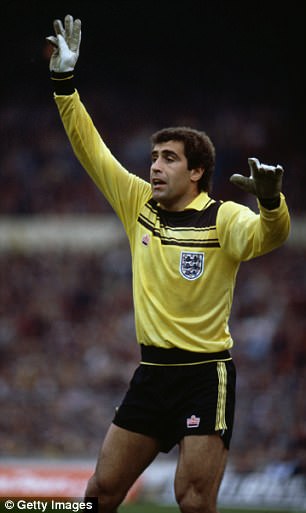 Former England goalkeeper Peter Shilton, who holds the record for playing more England games than anyone else, with 125 caps, said: ‘It is irreplaceable. You cannot replace what Wembley is and what the place means to so many’

‘Where do you draw the line? Are we going to sell the soul of our game? You can never get that back. We cannot sell Wembley.

‘I know they’re talking about playing finals and England matches at Wembley but for how long? Once the FA loses control you don’t know what might happen in the future.’

The row comes after controversy over the decision to hand the contract to print British passports to a Franco-Dutch firm and fears that the engineering company GKN will be broken up by its new owner and sold off abroad. Critics say the Government is failing to do enough to support UK firms.

Miss Hoey, Labour’s sports minister between 1999 and 2001, said: ‘I’m very worried about this. It’s obviously important that the Lottery money went in because it enabled Wembley to become the national stadium for England. Selling it means it will no longer be that.

‘I think the stadium should stay owned by the governing body, the FA, because once sold, who knows what will happen ten years later if it is sold on again. It could be the thin end of the wedge.’

Mr Reid said: ‘This place is iconic to every working man, football fan and aspiring player.

‘English football is one of the wealthiest sports in the world. The FA and Premier League should already be generating enough funds to keep grassroots football in a healthy condition without having to dangle a promise based on selling its home.

‘English football without Wembley is like gin without tonic or tea without milk. It’s just not right.’

FA chairman Greg Clarke hinted yesterday that the governing body would not be rushing into any decision on the deal, despite claims that it might be done within eight weeks.

He wrote to FA Council members asking them to ‘canvass’ views on any sale and insisted there was still to be a ‘debate’ on the issue. ‘All parties can see the need to proceed with caution with an eye to the risks involved,’ he added.

Former Chelsea owner and FA executive Ken Bates, 86, called on the public to back a petition to force a Commons debate. ‘I was part of the rebuilding project and I never envisaged the stadium being sold in this way,’ he said.

‘I would call for a debate in Parliament because it is such an important issue. Wembley is the national stadium and should not be sold.

‘There is also the issue of public money used in the £757million rebuilding costs. A quarter of what was spent was public money – be it from the Lottery or other sources – so much of the stadium belongs to the public.’

John Spellar, the Labour MP for Warley, said: ‘Any public money which went into Wembley stadium should go back to the public purse. Money should be made available for good causes to take account of what the Lottery put in and money that has come from taxpayers should go back to taxpayers.

‘There must also be assurances that this won’t impact on English football requirements such as national football league games.’

Wembley MP Dawn Butler, who represents Brent Central for Labour, said: ‘The impact of Wembley’s sale could have a profound long-term ramifications on the local area and English football.

‘We must ensure Wembley remains the home of English football and that the local community is not detrimentally affected. I will be meeting with the FA next week, where I will raise these issues.’

Fellow Wembley Labour MP Barry Gardiner added: ‘Let’s not see our national football stadium traded away in a backroom deal. Wembley Stadium is not just at the heart of our borough of Brent, it’s at the heart of Britain.’

However, former England boss Sam Allardyce insisted the sale made sense, but said Wembley should continue to stage some important matches.

When was it rebuilt?

THE famous old stadium, which was built in 1923 and included the iconic ‘Twin Towers’, was demolished in 2003.

The new England national stadium, with its 436ft high arch, was built on the site, opening four years later.

Where did all the money come from?

The Football Association secured huge loans for the project, but much of the money came from the taxpayer and National Lottery.

Sport England, a quango which hands out Lottery cash, gave £120million towards the project.

The Department for Culture, Media and Sport contributed a further £20million from central government funds and the London Development Agency (LDA) contributed another £21million.

The LDA, a quango which supported projects designed to foster economic development, was shut down in 2012 and merged into the Greater London Authority. This £161million was given in the form of grants – not loans.

In total, the stadium cost almost £800million to build. At the start of this year, £142million of debt still remained to be paid. In January, the FA said it would have paid that back by the end of 2024.

Will the public get their money back?

A number of MPs have demanded that, if the stadium is sold, public money should be ploughed back.

Sport England demanded the owner pay towards grassroots football. In a statement, the body said: ‘Sport England invested £120million of National Lottery money into the development. We look forward to hearing more detail about how such a deal would work and whether it would benefit grassroots sport.’

The FA has not said anything officially, but it is believed millions would be ploughed into local football if a deal is agreed. Sadiq Khan, the Mayor of London, has instructed lawyers to see whether the capital could get back the £21million it gave to the project via the LDA.