And exes Wendi Deng and Rupert Murdoch reunited in New York City for a lunch date with their daughter Grace on Saturday.

The media tycoon, 86, and his businesswoman ex-wife, 48, looked to be on fantastic terms as they shared a friendly hug outside a Madison Avenue restaurant.

Amicable: Exes Wendi Deng and Rupert Murdoch reunited in New York City for a lunch date with their daughter Grace on Saturday

Wendi looked chic in a cream jumper decorated with colourful feather print, which she layered over an ivory top.

Showing off her toned legs in skinny jeans the brunette beauty completed her outfit with strappy sandals and toted a shopping bag.

Her raven tresses were styled in soft curls and she opted for a light dusting of make-up to accentuate her pretty features.

The News Corporation founder and executive chairman, who is worth an estimated $12bn, looked dapper in a fitted white shirt, navy suit jacket and slate grey trousers. 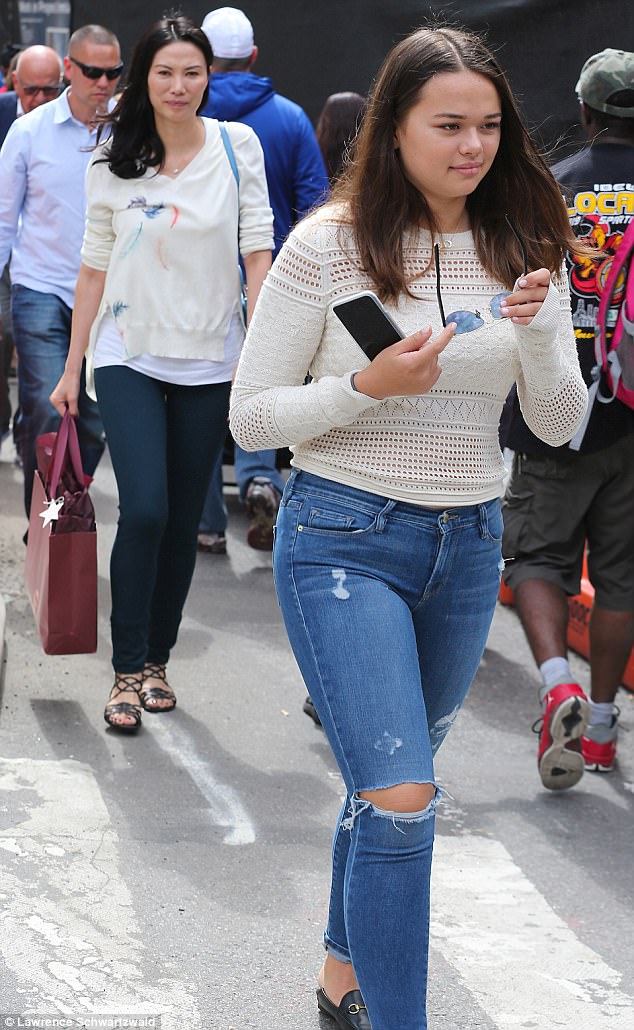 The couple married in 1999 after first meeting in 1997 when Wendi was a TV executive at the Murdoch-owned Star TV network in Hong Kong.

They welcomed daughters Grace and Chloe, 14 during their marriage.

Wendi memorably slapped a man about to throw a custard pie in Rupert’s face during a parliamentary hearing with MPs over the phone hacking scandal in 2011.

They announced their split in 2013, with a statement saying their marriage had been ‘irretrievably broken down’ for more than six months, amid rumours of Wendi’s increasingly strong friendship with former Prime Minister Tony Blair.

Rupert has since remarried to supermodel icon Jerry Hall, 61, who he wed in March 2016.

The marriage is the fourth for Murdoch and the second for Hall, who had a long relationship with Sir Mick Jagger.

The couple, who have 10 children between them, met in Australia in August 2015, when Jerry was touring Down Under with a production of The Graduate.

While Wendi has  gone on to date Hungarian toyboy and male model Bertold Zaharan, 21.