A Wendy’s manager has sparked outrage for insulting his employees and bashing his Massachusetts town as a drug-riddled, talentless ‘pool of ex-junkies’.

Wendy’s customer Matthew Rose said that he had been shocked by the bad service he received when he visited the restaurant on Cranberry Highway in Wareham on August 3. He says he returned a few days later, to a similarly terrible experience.

Outraged, he sent an e-mail complaint to Wendy’s corporate office.

But the reply he received on Monday morning from district manager Keith Edward Helger left him angry and offended as Helger complained that the town has ‘no talent pool to hire from’ as it’s filled with recovering addicts.

The e-mail Rose received said: ‘I apologize for your experiences at this location. Not an excuse but the town of Wareham has little to no talent pool to hire from. This is an ongoing issue in that area. We are constantly interviewing and hiring any and all qualified candidates. Unfortunately those candidates are hard to come by as most are recovering addicts and we cannot hire them.’

‘We will continue to do our best to fix the issues in this location and improve the overall Wendy’s experience. I appreciate your feedback.’ Wendy’s District Manager Keith Edward Helger (left) has sparked outrage for responding to customer Mattew Rose’s (right) complaint e-mail about poor service at a Wareham, Massachusetts Wendy’s restaurant with insults, saying the town has ‘no talent pool to hire from’ and is filled with recovering addicts 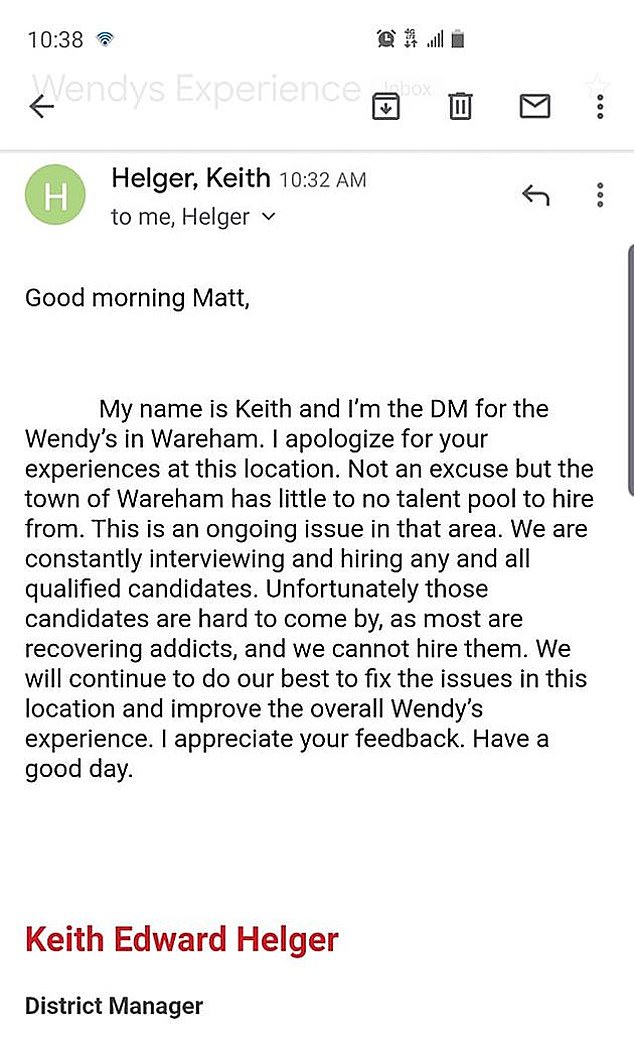 Rose received this e-mail from Helger on Monday after he complained. Helger said: ‘Not an excuse but the town of Wareham has little to no talent pool to hire from…Unfortunately those candidates are hard to come by as most are recovering addicts and we cannot hire them’

Wareham, a small town of 22,640 people, and the state of Massachusetts are crippled by the opioid epidemic. Massachusetts is among the top 10 states with the highest rates of drug overdose deaths involving opioids.

Rose found Helger’s condescending tone towards the employees and town as disgraceful.

‘Completely cruel. [It] didn’t even touch on the problems I told him,’ Rose said to WCVB.

‘Saying that the town of Wareham is full of junkies and people that have no viable talent to work in a fast food restaurant — that is more than heartless,’ he added.

Wendy’s told DailyMail.com they do not condone Helger’s negative e-mail saying and his statements do not reflect Wendy’s hiring practices.

‘These comments are inconsistent with our company’s values and do not reflect Wendy’s hiring practices. We work hard to create a welcoming and inclusive environment in our restaurants and will address this appropriately,’ the chain said in a statement. 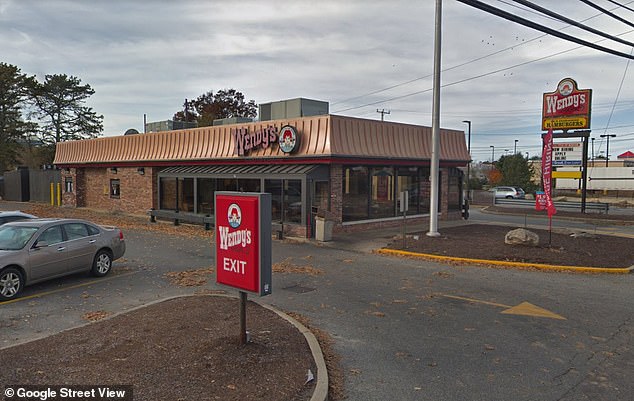 Wareham, a small town of 22,640 people, and the state of Massachusetts are crippled by the opioid epidemic. Massachusetts is among the top 10 states with the highest rates of drug overdose deaths involving opioids

But Rose says the company needs to show more compassion to their Massachusetts employees and the town, where he’s lived for 20 years.

‘I think they need to address it a little bit better than that. I think they actually need to show some compassion for the communities that they’re serving,’ he said to NBC.

‘Frankly, I’m shocked and disappointed that a respected company like Wendy’s would openly disparage an entire community like Keith Helger did with his woefully shortsighted comments about people who support his business as dedicated employees and customers,’ town administrator Derek Sullivan said in a statement.

‘No community, including Wareham, has been spared from the devastating impact of the opioid epidemic. But to single out and demean Wareham and the hard-working people in recovery from the disease of addiction is about as tasteless as it gets,’ he added.

Locals have also expressed their outrage on local Facebook groups, many calling for a boycott.

According to his Linkedin, Helger has worked as the District Manager for the Wareham Wendy’s since December 2016

Helger’s e-mail has sparked outrage among local customers, who took to Facebook to voice their anger and call for a boycott

‘It makes me sad to live in a town where people agree with this statement. You believe your town is filled with people with no talent?? People in recovery don’t deserve a second chance in life?’ one Facebook user said.

Some local customers added that the restaurant was understaffed, disorganized, and unsanitary.

‘I had problems with that location in years past. On two different occasions I had gotten food there, and both times I had a live cockroach inside my burger. I guess they aren’t kidding when they claim they use fresh meat. More like freshly scrapped off the floor. I will never give any business there,’ one Facebook user wrote.

Another customer noted that the restaurant is understaffed and disorganized.

‘One kid running the counter taking orders getting drinks sandwiches fries etc all by himself the other six people including the manager working the drive-thru. One kid who appeared to be the sandwich person was over in the corner cracking jokes and dropping f-bombs every 5 seconds which is totally inappropriate and you could hear it in their dining area. The manager himself seem to have no control over his crew. So we won’t be going back there after waiting 20 minutes for food,’ they noted.