Hollywood star Wesley Snipes is trying his hand as a cryptocurrency entrepreneur, DailyMail.com can reveal.

The Blade star has linked up with a new messaging app called NYNJA which utilizes cryptocurrency – and he believes it’s the future of movie-making.

Snipes, whose last big movie was The Expendables 3, says the new technology is like ‘tech-jujitsu’ and is ploughing his time and energy into the project while on a break from movies.

The actor, 55, was recently in Puerto Rico to preview the alpha version of NYNJA’S new global communication platform and is set to become the app’s ambassador once it launches later this year.

The technology integrates an advanced messaging app with on-demand digital marketplace and its own cryptocurrency called NYNJACoin.

Snipes joined NYNJA execs at CoinAgenda at La Concha Resort, in Puerto Rico earlier this month where the firm presented an alpha version of the app.

A movie-maker and businessman Snipes says he’s been exploring emerging blockchain technology for a while and hopes it will revolutionize the way movies are funded and produced. 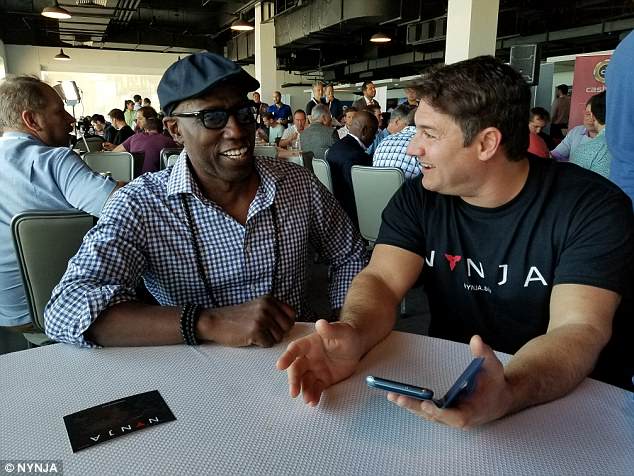 In April 2013, Snipes was released from prison and ordered to spend four months under house arrest to complete his three-year prison sentence for tax evasion. He is seen with Guerrieri during an event in Puerto Rico

He told DailyMail.com: ‘The NYNJA mobile communicator has the potential to lead the pack in the secure communications space.

‘I love the app and the spirit of its creators. As an on-set solution for film production this tool is pure ‘fiyah’.

‘It’s like tech-jujitsu. Simple solution to a complex problem. And when they told me the product name was NYNJA, I was all in… maybe it’s a BLADE thing.’

JR Guerrieri, CEO of NYNJA, said: ‘When we first met Dr. Snipes, it was clear we shared a vision for how blockchain technology will fundamentally change the future of communication, business and entertainment.

While NYNJA president Alec Gramont, added: ‘As a veteran actor and savvy entrepreneur skilled in martial arts, Wesley understands the significance of NYNJA’s sleek app that packs a serious punch.

‘We’re grateful for his experience and enthusiasm for our project.’

Despite his new venture, actor Snipes is still making movies having starred alongside Sylvester Stallone, Arnold Schwarzenegger and Mel Gibson in 2013 movie The Expendables 3. 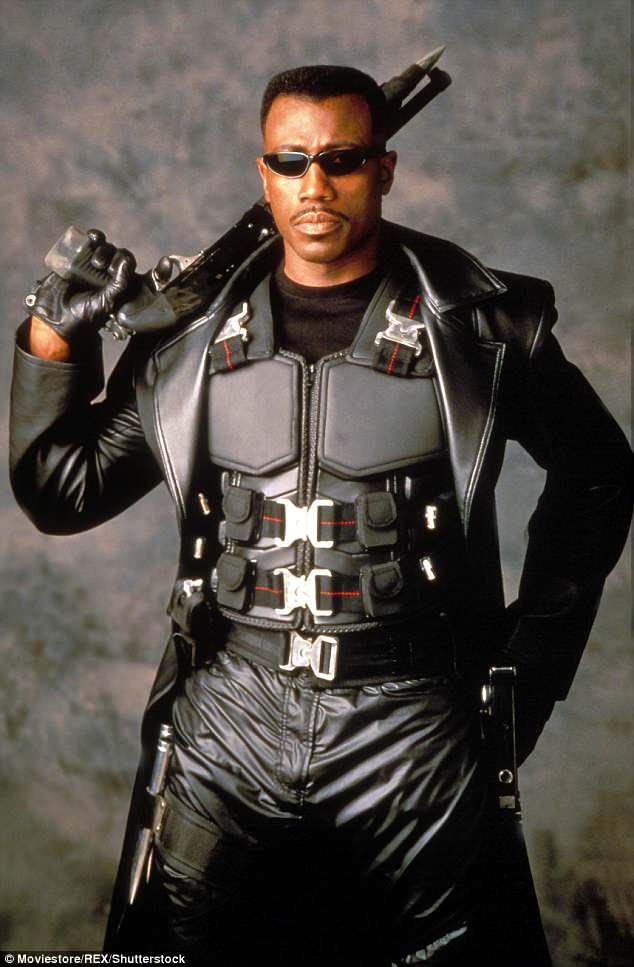 Snipes – who is best known as the half-human, half-vampire blood sucker hunter in the three Blade movies – is back on track after a stint in jail over 2010 federal tax evasion charges. Snipes is seen above as Blade

More recently he starred in 2017 movies Armed Response and The Recall and earlier this year he hinted he’d be ‘open’ to returning to the big screen by making Blade 4.

Snipes – who is best known as the half-human, half-vampire blood sucker hunter in the three Blade movies – is back on track after a stint in jail over 2010 federal tax evasion charges.

Snipes was the first person outside of NYNJA staff to check out the new app.

Under development since the beginning of 2017, NYNJA will soon be available in a beta version.

At launch, NYNJA will be available on Android, iOS, and Web with native development of Mac, Linux and Windows versions to follow.

In April 2013, Snipes was released from prison and ordered to spend four months under house arrest to complete his three-year prison sentence for tax evasion.

Snipes was convicted in 2008 of three misdemeanor counts of failing to file tax returns but was acquitted of felony fraud and filing false tax claims.

Prosecutors argued that Snipes had earned more than $38million between 1999 and 2006 but failed to file income tax returns or pay any taxes during that time.