West Brom 1-1 Watford: Ismaila Sarr scores from inside his OWN HALF but then misses a penalty

West Brom 1-1 Watford: Ismaila Sarr scores from inside his OWN HALF but then misses a penalty as Karlan Grant earns the Baggies a draw against the Hornets

Ismaila Sarr produced one of the finest goals ever seen in the English game and yet still ended up a villain as well as a hero for Watford.

Having scored from 60 yards in the first half, Sarr then failed to do so from 12 as goalkeeper David Button took revenge by saving his 73rd-minute penalty. That denied Watford a win they did not deserve.

Yet it seems unfair to castigate Sarr after he delivered a moment for the ages – though he was still booed by the home crowd when substituted late on. Indeed, they should hand over the Goal of the Season award now. While we’re at it, close voting for the Puskas Award. And we might as well stop looking for the Goal of the Century too.

Sarr succeeded where Pele failed and emulated David Beckham in the process. The winger was not even born when Beckham scored from inside his own half for Manchester United against Wimbledon at Selhurst Park on August 17, 1996, but 26 years later he produced a strike that will be remembered for as long as the former England captain’s iconic effort.

There appeared to be little danger when Sarr collected the ball in the 12th minute, just inside his own half. Or at least, that is what West Bromwich Albion goalkeeper David Button must have thought as he stood on the edge of his penalty area.

Seconds later, he was picking the ball sheepishly out of his net after being made to look a fool by Sarr, whose power and accuracy were breathtaking. Even Pele – who nearly did the same for Brazil in the 1970 World Cup, but saw his attempt against Czechoslovakia miss by a fraction – would have been impressed. 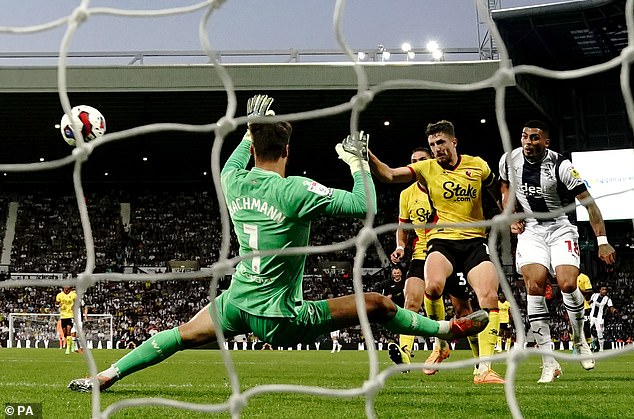 Though this was a cracking game, few who saw it will recall anything other than Sarr’s goal. For the record, Watford goalkeeper Daniel Bachmann was outstanding before Karlan Grant equalised for a dominant West Brom in first-half stoppage time and the home side continued to charge forward in the second half.

It looked like Watford would steal it when they won a spot-kick, only for Button to deny Sarr. On this evidence against a relegated side, Steve Bruce’s men will be tough opponents for anyone if they can sort out their finishing.

The Baggies tore into Watford from the off and were denied an early lead by two brilliant saves from Daniel Bachmann, who first tipped over Darnell Furlong’s volley and then kept out Karlan Grant from close range. 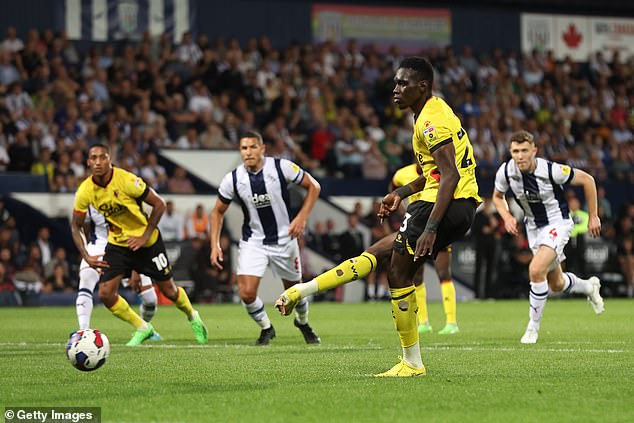 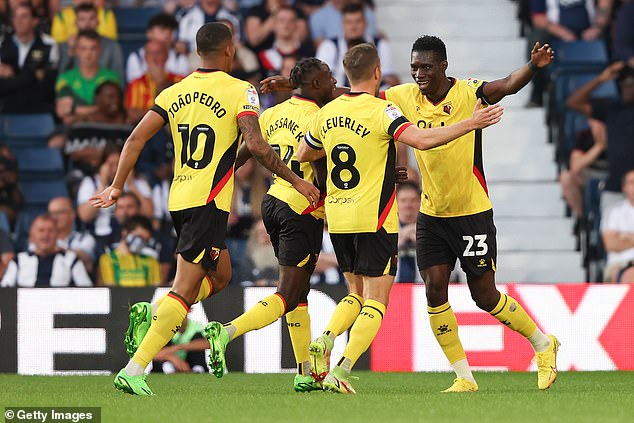 Watford were wobbling and Albion appeared on the cusp of the lead, when Sarr produced one of the most magical moments this ground has witnessed.

Jake Livermore’s aimless ball out wide was headed towards halfway by Francisco Sierralta, where Sarr collected it with his back to goal – still inside Watford territory. With a quick glance over his shoulder, the winger saw Button well off his line and found the perfect line and length to lob the goalkeeper and find the net.

For such a memorable goal, Sarr’s celebrations were relatively understated, as though the Senegal star could not quite believe what he had done. 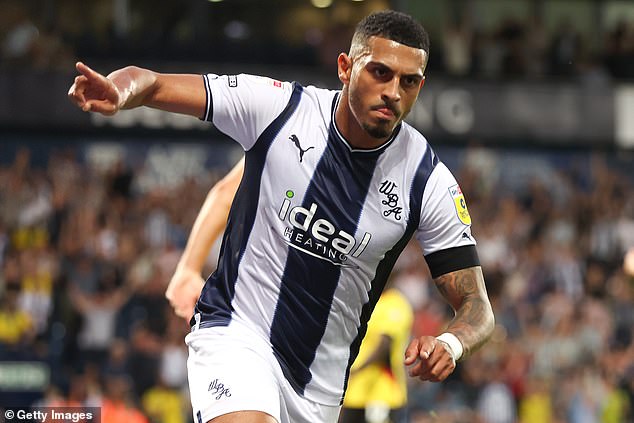 To their credit, West Brom powered on, yet Grant’s finishing was poor and Bachmann was inspired. Grant volleyed wide when John Swift was waiting for a tap-in, then saw a shot blocked by Christian Kabasele. Then Swift seemed certain to equalise from eight yards only for Bachmann to produce another super stop.

West Brom finally got the goal they deserved in first-half stoppage time. Grant controlled Grady Diangana’s glorious lofted pass impressively and this time gave Bachmann no chance with the finish.

Though Albion did not threaten Watford’s goal as much as before the break, they were still well on top – until Semi Ajayi shoved Sarr over in the box. The former Rennes man should have been full of confidence but his kick was weak and easily stopped. Not that anybody will remember that in the years to come.