Pep Guardiola may scoff at the notion that Manchester City can match Arsenal’s Invincibles, but just who is going to stop them?

Chelsea and Liverpool have already tried and failed. Arsenal will have their chance at the Etihad next week.

Here at the Hawthorns, West Brom gave it a very good go; as good as any team City have faced in the Premier League this season, even though the scoreline did not reflect the leaders’ superiority. 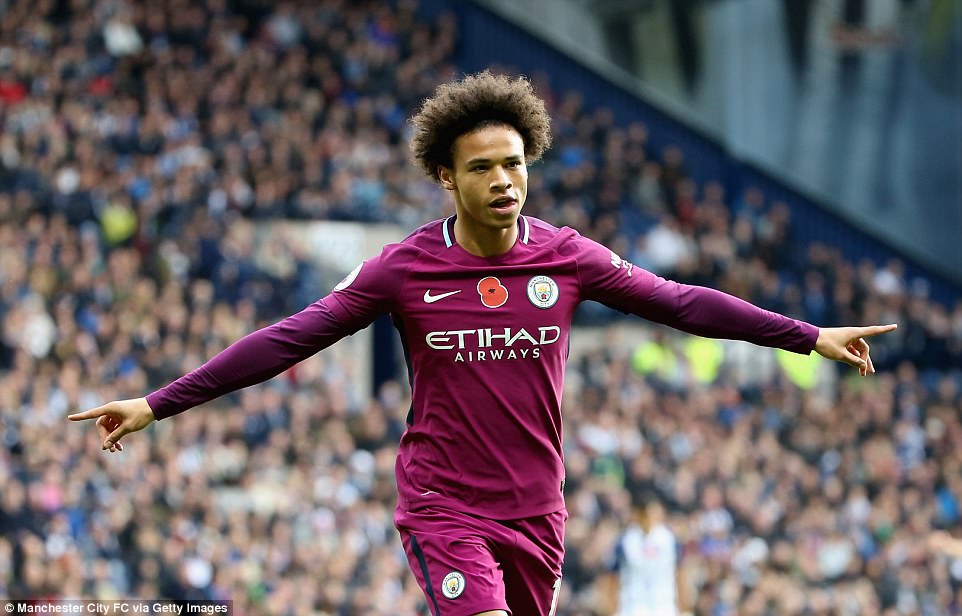 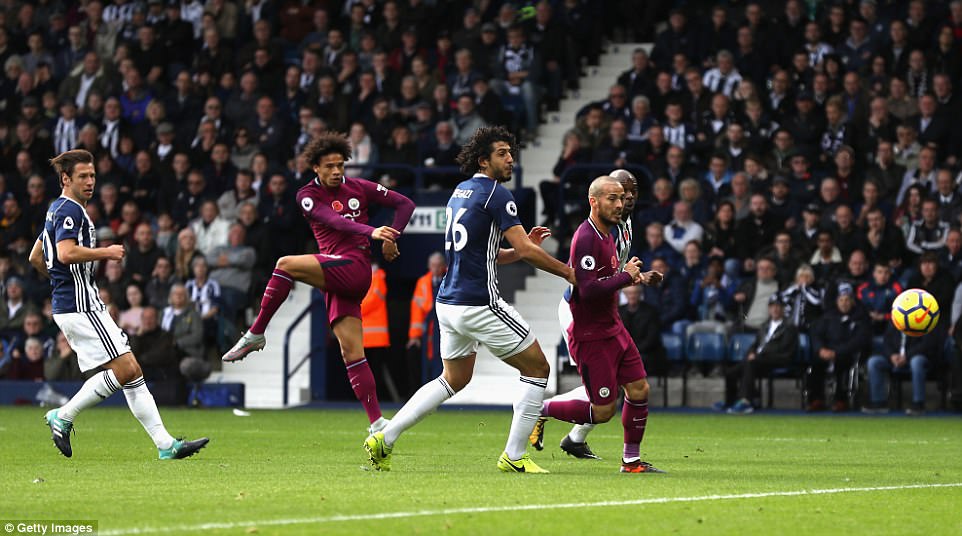 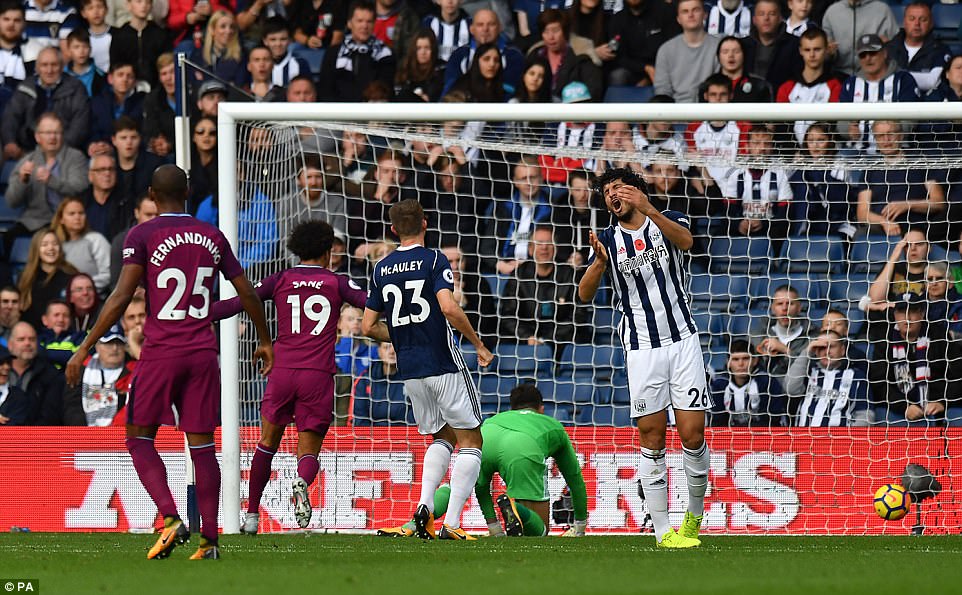 Five minutes later, Fernandinho’s defected strike saw Sane pick up an assist after he had passed to the Brazilian in space 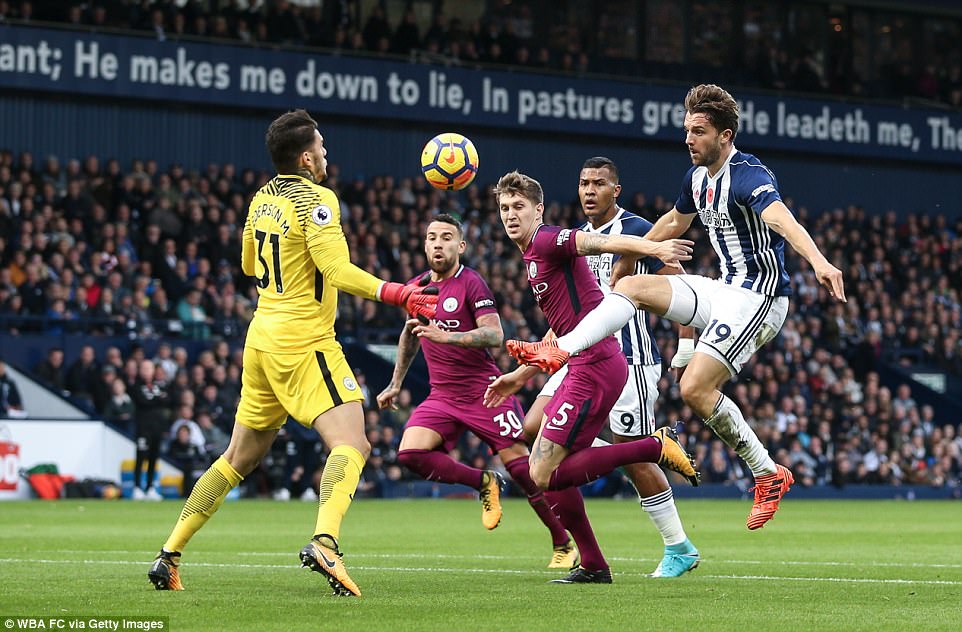 In between City’s first two goals, Jay Rodriguez gave the Baggies momentary cause for celebration with a chipped equaliser 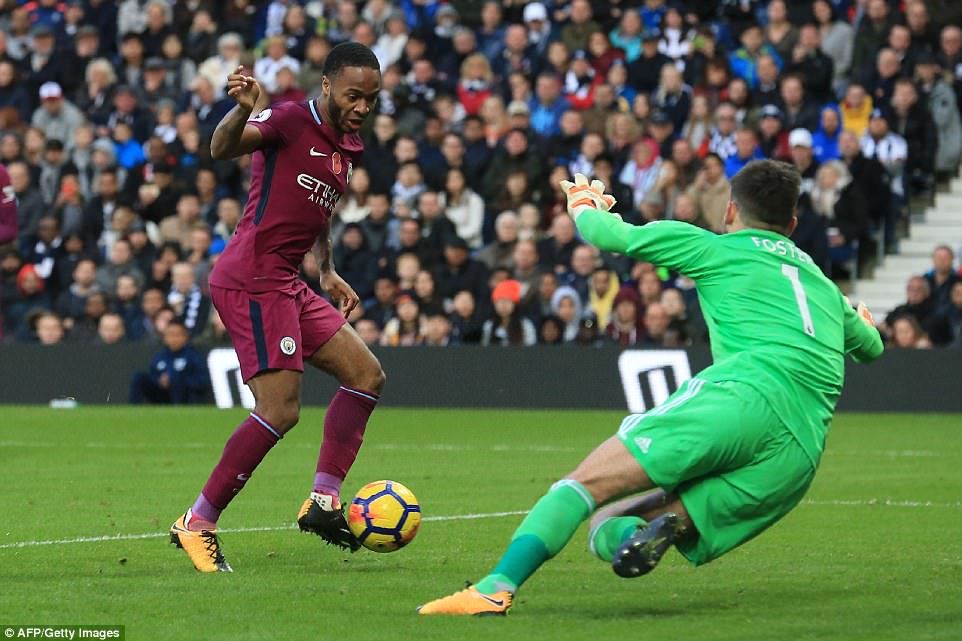 Albion exposed some cracks in Guardiola’s defence and were in this game right until the end.

But even on days like this when City are not at their best and have to rely on the individual brilliance of players like Leroy Sane and the odd slice of luck, they find a way of pulling through.

That is the main difference from Guardiola’s first season in England and makes this victory as valuable as any of the seven straight wins in the league that preceded it.

City have now equalled the Premier League record of 28 points from their first 10 fixtures set by Chelsea in 2005 and Roberto Mancini’s side in 2011. Both went on to win the title.

Liverpool manager Jurgen Klopp has suggested rather flippantly that City could be champions in January.

When that was put to Guardiola, he pulled one of his faces. 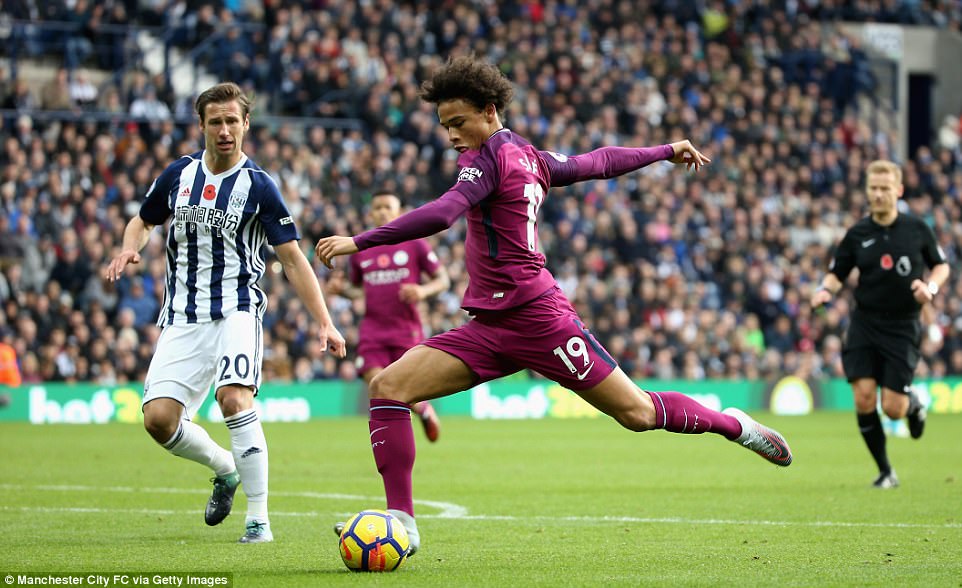 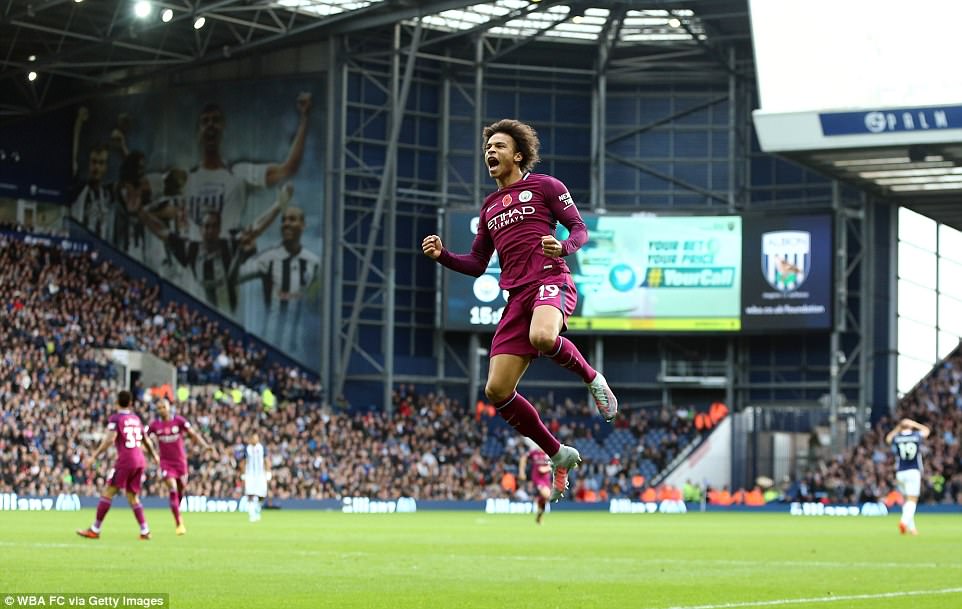 The 21-year-old jumped for joy after firing City in front, punching the air as he celebrated in front of the supporters 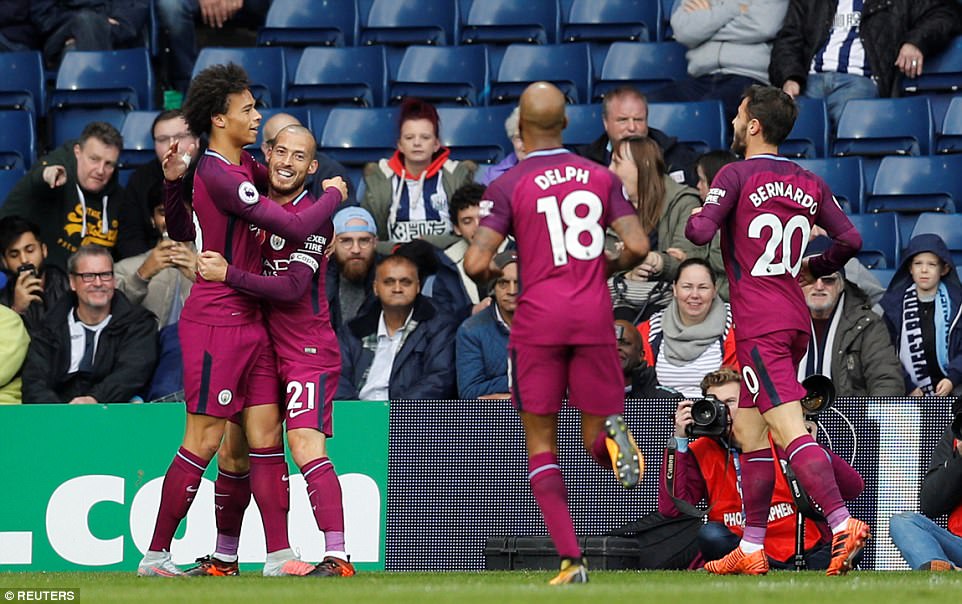 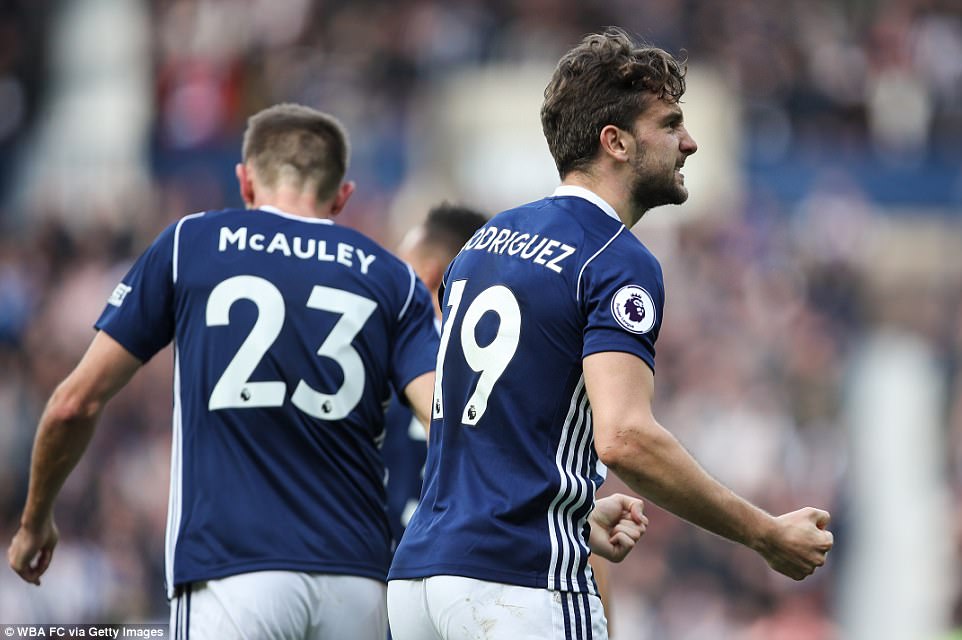 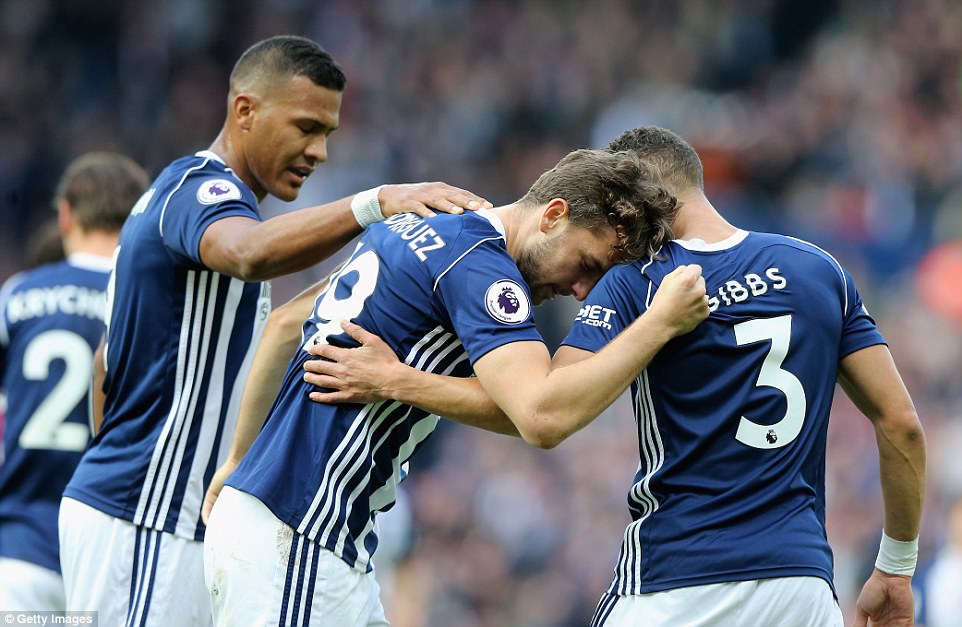 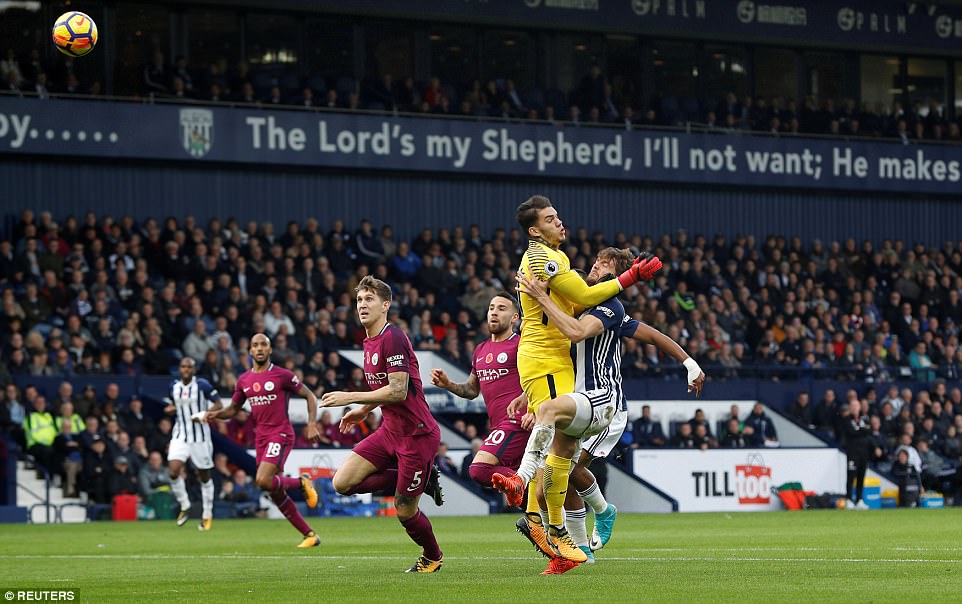 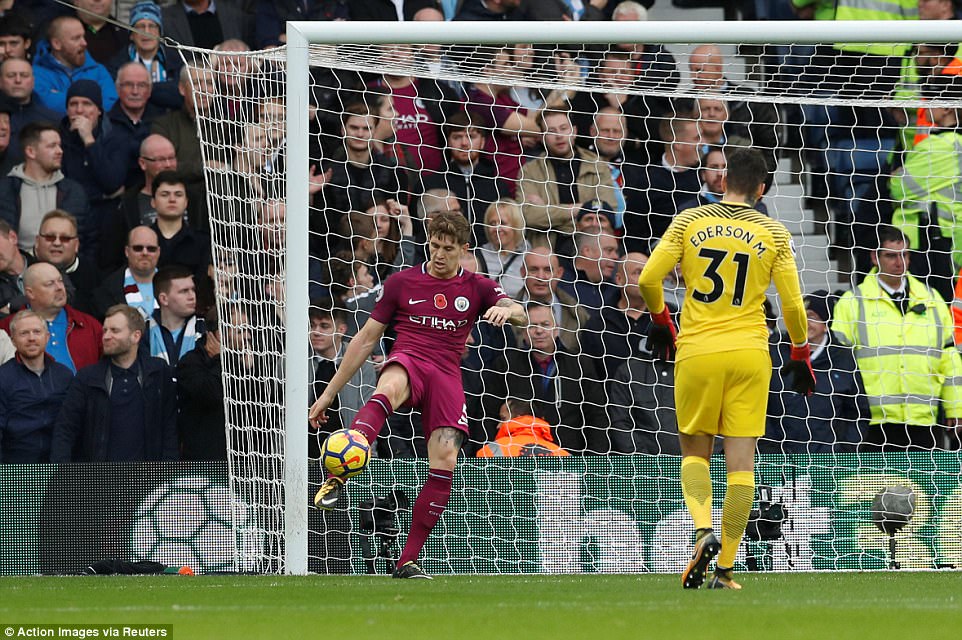 HOW THE NUMBERS STACK UP

No one has bettered City’s start to a Premier League after 10 games. (W9 D1 +29 goal difference)

21 games unbeaten in all competitions. A club record.

8 straight league wins for City with an aggregate score of 32-5.

844 passes completed yesterday — the most by any team in a Premier League game.

‘Did you see a champion in January? Me neither,’ he said. ‘Ten games, nine victories, one draw, so it’s a good start to the Premier League.’

Victory here also saw City’s goals total rise to 35 from the first 10 games, beating Guardiola’s previous best set with Barcelona in 2011, even though Sergio Aguero remained on the bench ahead of Wednesday’s Champions League tie in Naples.

The fact that they conceded two – albeit one right at the end from substitute Matt Phillips – will concern him more.

This was not quite the scintillating City we have admired in recent months, even though they still played some wonderful football.

They were not as clinical in attack and more vulnerable in defence.

‘When you analyse it, we concede three chances and concede two goals. We create how many and just scored three.

‘In those terms, we have to improve. We need to be clinical if we want to win titles but football is unpredictable.

‘But you cannot win all the time by five or six goals, that is not realistic.

‘It is important to be able to win when you don’t play at a high level. That is a big difference this season because last season when we didn’t play good there was no chance to win. Until now, it hasn’t happened.’ 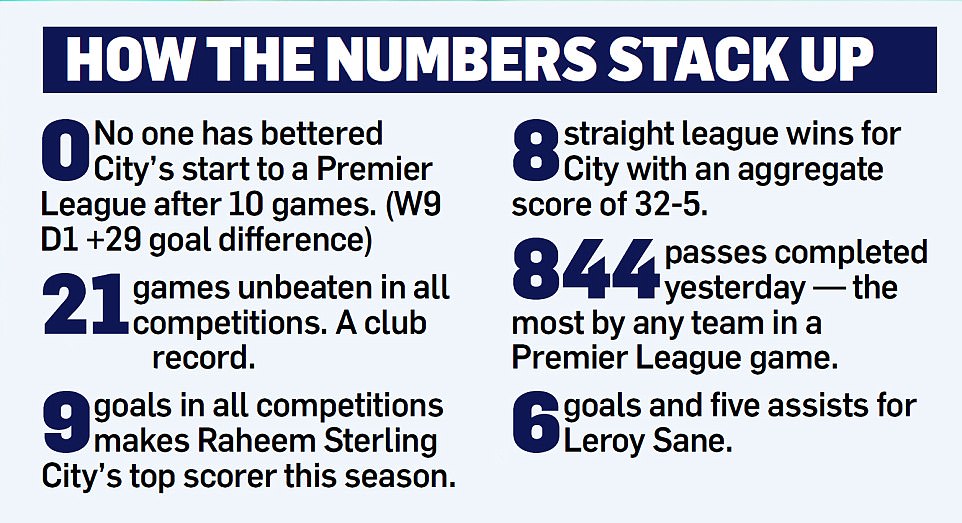 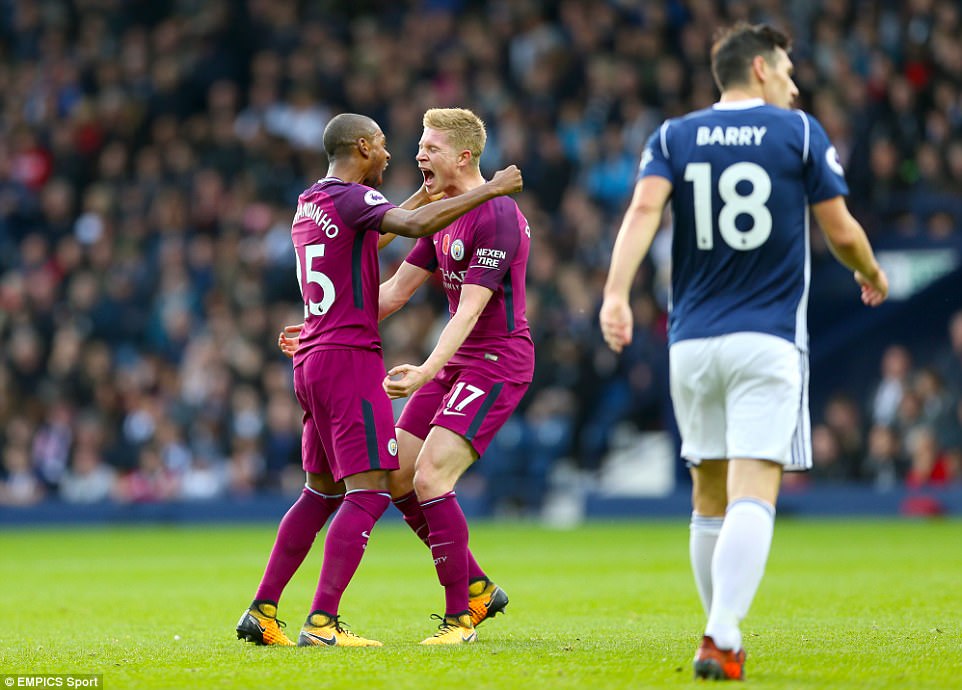 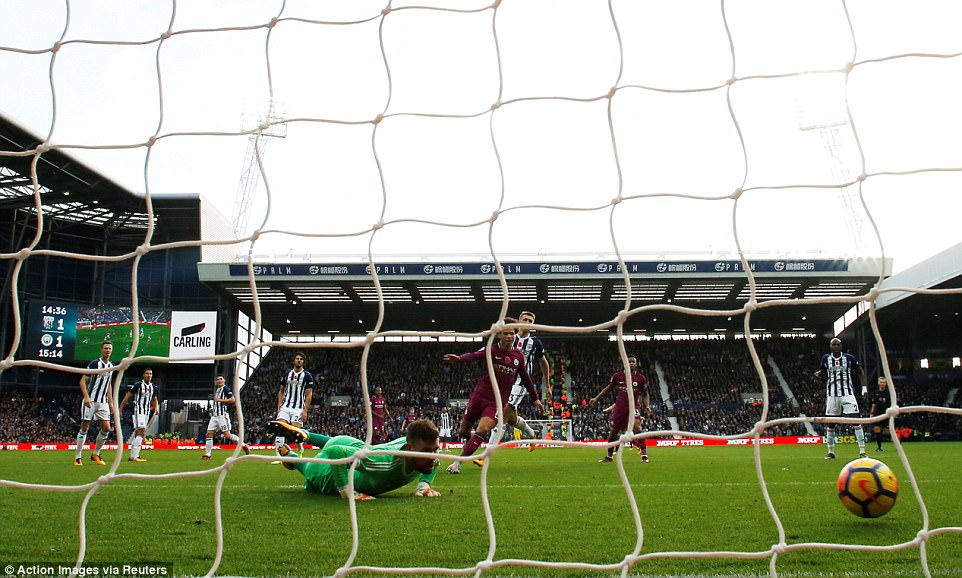 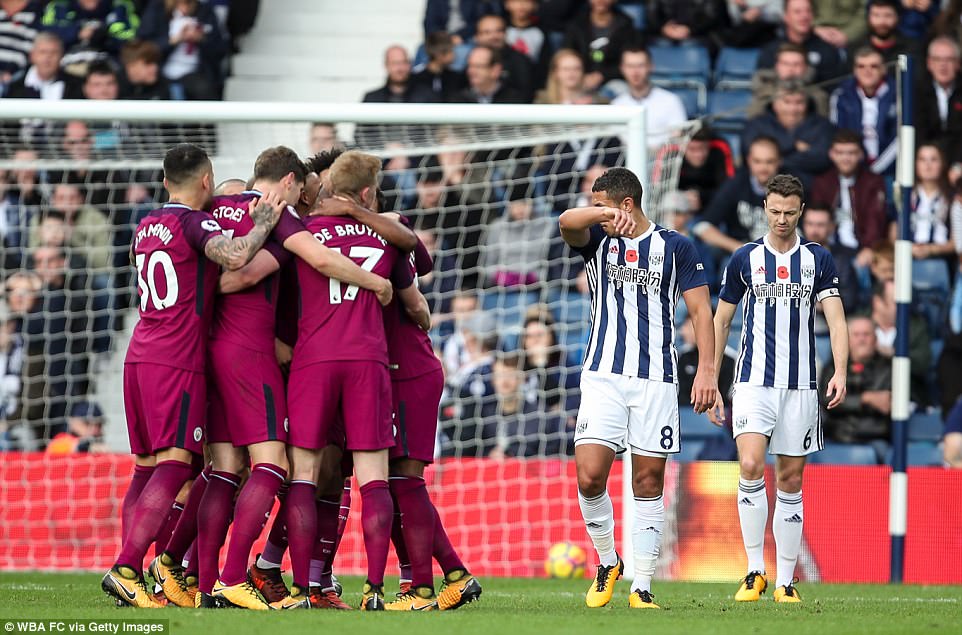 Any suggestion that West Brom could frustrate Guardiola’s side was blown away in a frantic opening that brought three goals inside the first quarter of an hour.

Sane, who scored twice when City won here in the Carabao Cup last month, was the instigator once again and has now been involved in 11 of City’s goals in his last seven matches.

The game was 10 minutes old when he received a pass from Fernandinho on the edge of the box.

The young German winger had only one thing in mind. He cracked a stunning shot past defender Nyom and goalkeeper Ben Foster into the top corner.

It was the strike of a young man in supreme form and brimming with confidence.

West Brom hit back with a surprise equaliser when former City midfielder Gareth Barry swivelled away from David Silva on the halfway line and clipped a pass over the top of the defence.

Salomon Rondon was marginally offside but Jay Rodriguez certainly wasn’t. He managed to bring the ball under control with one touch of his foot and another on his chest before lifting it over Ederson Moraes. 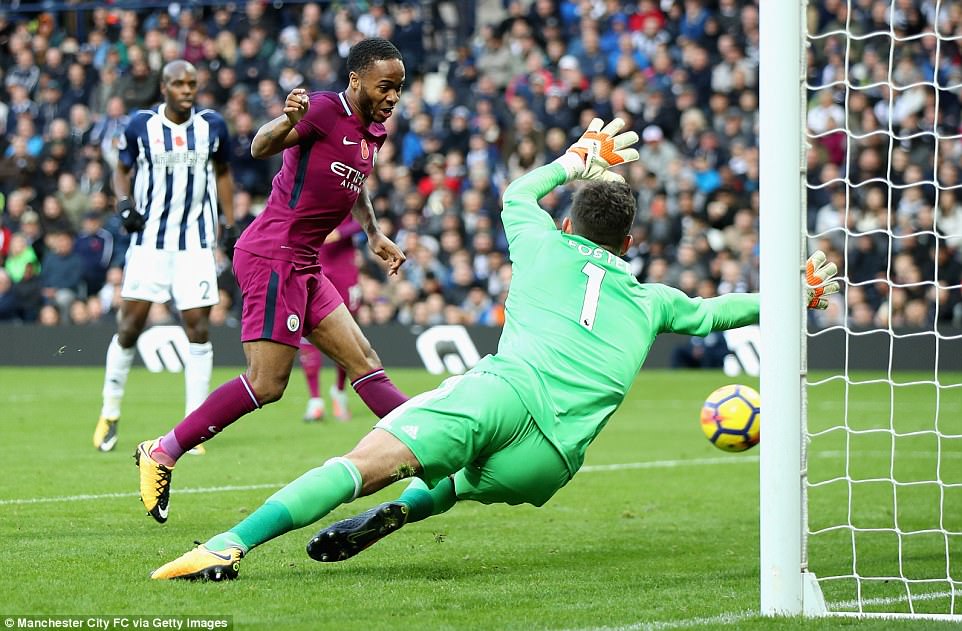 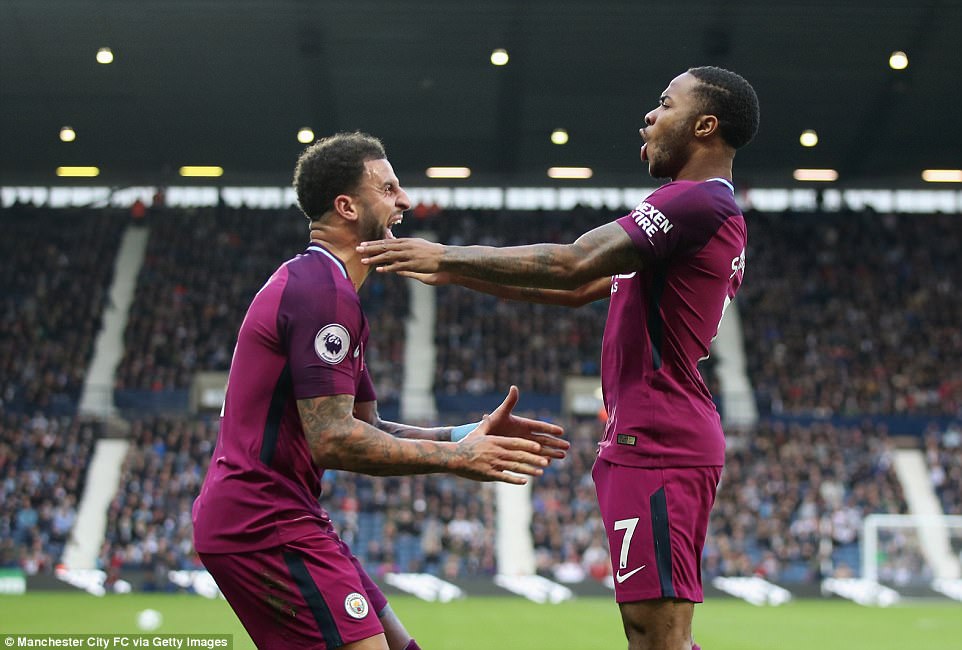 Sterling was set up by City right back and England team-mate Kyle Walker, who looked just as happy as he did 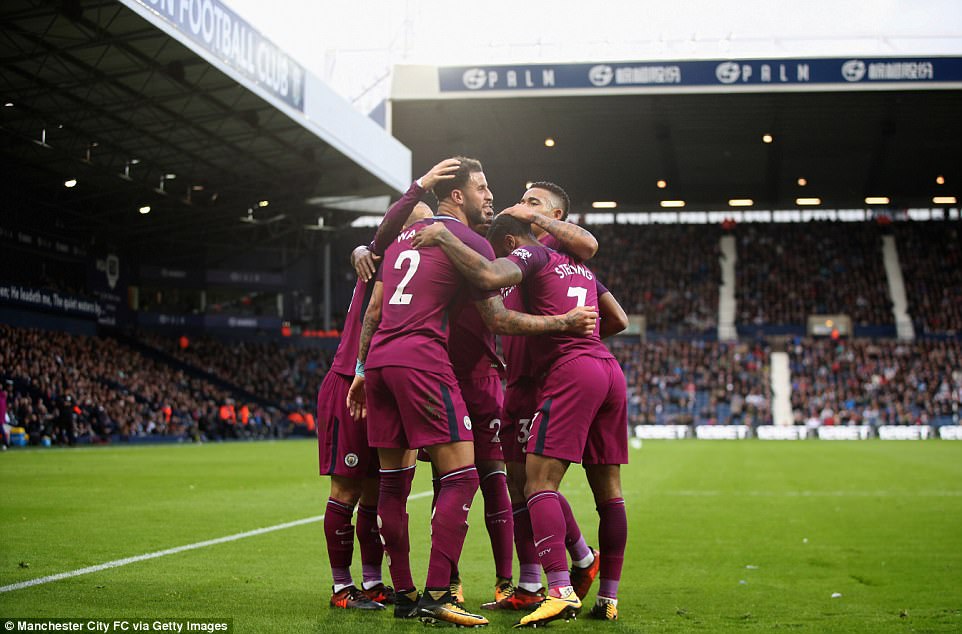 No sooner had West Brom drawn level than they were behind again.

Sane cut in from the left and fed Fernandino. Not for the first time this season, the Brazilian tried his luck from distance but this one had little venom.

However, it nicked off Barry’s boot, squeezed through the legs of Ahmed Begazi and went in off the post.

David Silva wasted two glaring opportunities to put City further ahead, while Rondon and Grzegorz Krychowiak both headed off target when well placed either side of half-time.

City thought they had killed the game off with a clinical third goal in the 64th minute, a slick move giving Kyle Walker the chance to cross first-time cross and Raheem Sterling scored close-range just three minutes after coming on as a substitute.

They looked to be seeing the game out comfortably when Nicolas Otamendi tried to chest Barry’s cross back to Ederson in added time and Phillips stole in to score.

It gave Albion – and the rest of the league – a glimmer of hope. But not for very long. 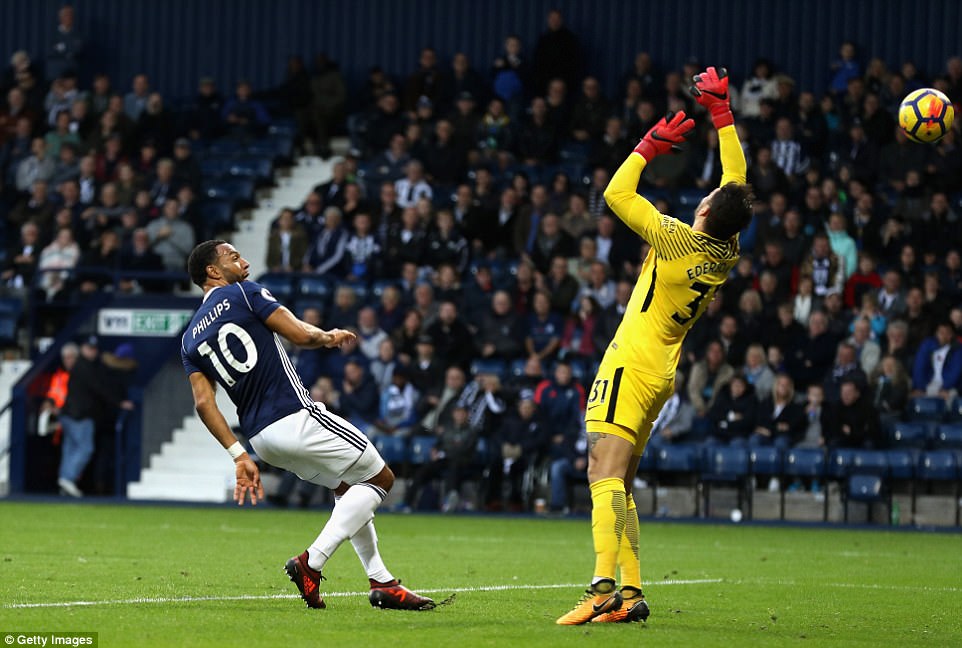 Ederson was lobbed again in stoppage time as Matt Phillips brought West Brom to within one goal but it was too little, too late