Covid has taken an ‘unprecedented’ toll on West Coast, with coach Adam Simpson forced to miss Saturday’s clash with Brisbane after testing positive for the virus and only 22 players available to the club.

On Thursday the Eagles confirmed eight staff and players are in health and safety protocols, with an incredible 21 footballers ruled out due to injury or Covid-19-related absences.

Simpson’s assistant, Matthew Knights, will take over as head coach for the game against the Lions.

West Coast coach Adam Simpson (right, speaking to players in the round seven loss to Richmond) has tested positive to Covid in another big blow to the struggling team 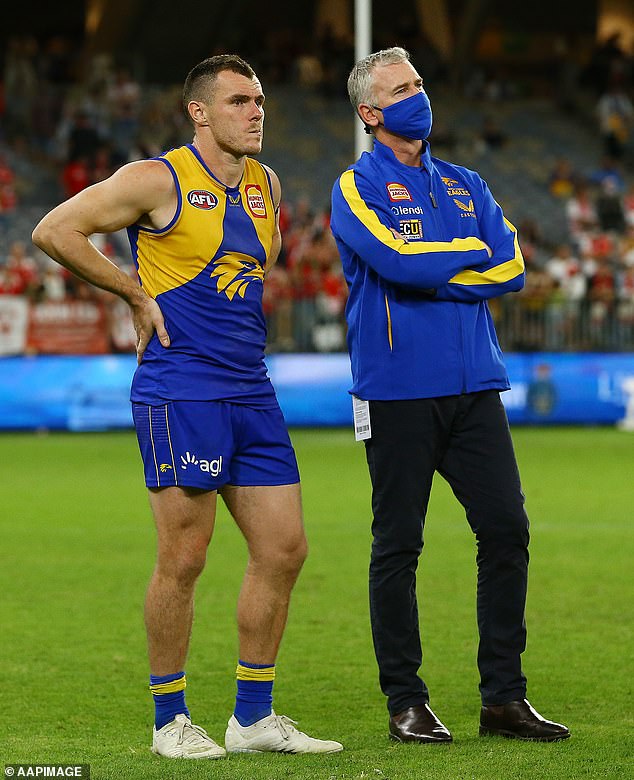 ‘As it stands we have 22 available AFL-listed players with the remainder either injured or in AFL Health and Safety Protocols,’ Eagles Football manager Gavin Bell said.

‘With Adam also being unable to coach this weekend, it is clearly unprecedented times.

‘We have been working hard with the players on Covid Contingency List and it is likely several of them will be a part of the travelling party.’

The news follows another body blow on Wednesday, when West Coast announced its WAFL side’s game against Fremantle on Saturday has been postponed because the club can’t provide the minimum three AFL-listed players. 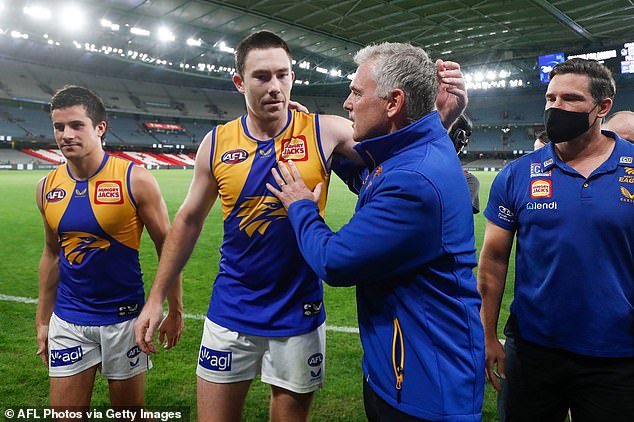 The Eagles have only won once this season, against Collingwood in round four (pictured)

West Coast have already used a league-high 24 players this year and were forced to play their round two match against North Melbourne despite losing 12 players to Covid protocols.

They fought bravely but lost 74-59 after fielding a side featuring top-up players who were not only making their AFL debut, but had never even trained with the club.

The team had to access its 20-player contingency list to field an AFL side at the time, and will now need to do so again for the Lions game.

There have been fears since the preseason that Western Australian sides would struggle with Covid this season because the state lacks the herd immunity found elsewhere in the nation after its borders were shut during the pandemic.