West Ham 1-1 Aston Villa: Dean Smith’s side hold on for a draw to ensure survival

If this was Jack Grealish’s last game for Aston Villa, it is certain that he will remember it vividly for the rest of his life.

The Villa captain, long admired by Manchester United, thought he had scored the goal that would keep his boyhood club safe from relegation when his deflected shot flashed past Lukasz Fabianksi seven minutes from full-time.

Victory was certain to make Villa safe but their agony was prolonged when substitute Andriy Yarmolenko equalised with a shot that deflected off Grealish and flew over Pepe Reina. Villa were ready to celebrate at full-time but manager Dean Smith urged them to calm down as they awaited confirmation of the result of the match between Arsenal and Watford. 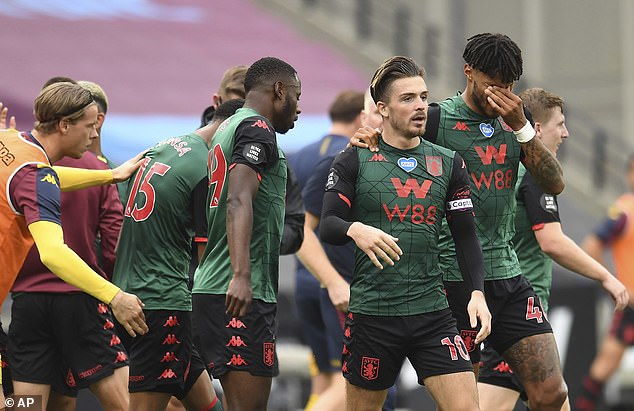 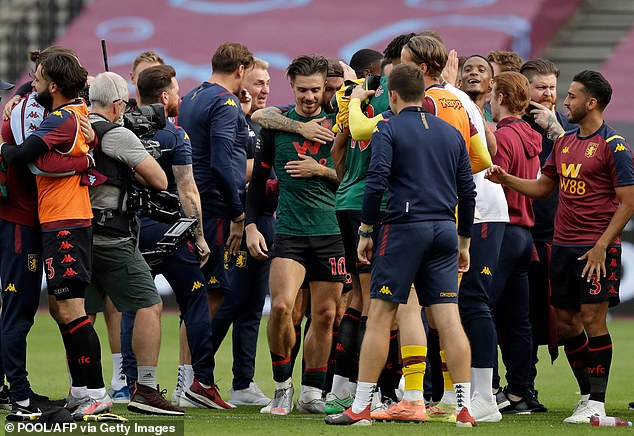 Players, coaches and other backroom staff waited in a huddle for 90 tense seconds until the news arrived that they were safe.

John McGinn leapt on top of his team-mates and Trezeguet peeled away from the crowd, screaming with joy. The ‘£200million catastrophe’ – as chief executive Christian Purslow labelled relegation in May – had been avoided. The £140m spent on new players after promotion from the Championship is no longer – at least for now – a stick to beat Villa with.

Huge credit must go to manager Dean Smith, who was on the verge of losing his job when Villa lost 4-0 at Leicester in March four days before the coronavirus pandemic halted the Premier League.

He used the interruption to improve Villa’s defending beyond recognition and that, as much as Grealish’s moment of inspiration, was what kept them up in the end. At one stage, Villa were seven points from safety, but Smith kept calm, kept focused and never stopped believing.

Villa had lost all nine of their previous matches in London, while West Ham were trying to avoid a record-equalling 10th home defeat of the campaign in the league.

The visitors looked to Grealish for inspiration but their captain could not find a way into the match early on.

He was lucky not to be booked for a late challenge on Ryan Fredericks in the fifth minute, shortly before Michail Antonio should have given West Ham the lead. 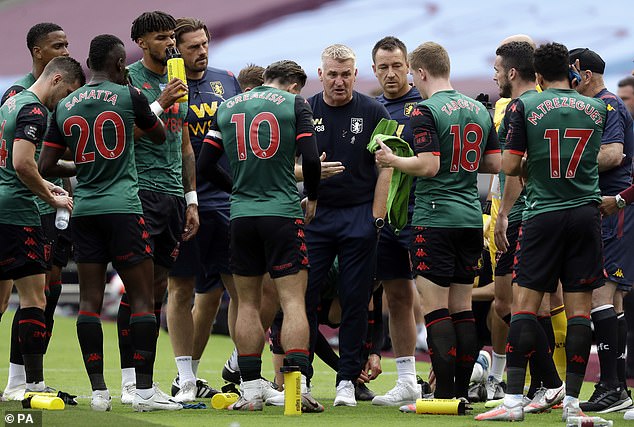 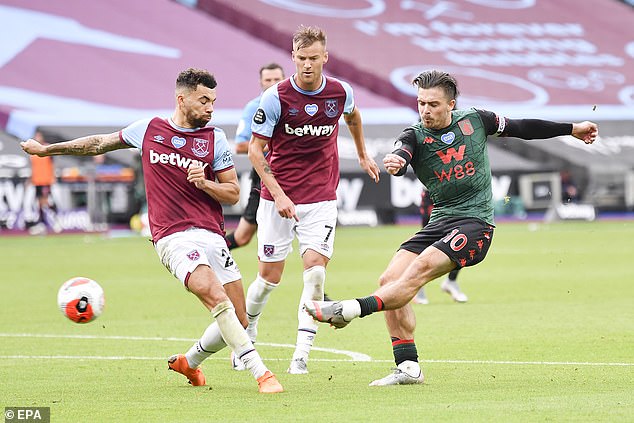 Ezri Konsa misjudged a long ball forward from Issa Diop, giving Antonio a free run on goal. Despite a solid first touch, the forward could only guide his effort wide of the post – a surprise for a man who has scored eight goals since the restart, and a huge let-off for Villa.

Mbwana Samatta could do no better at other end moments later when he headed Frederic Guilbert’s right-wing cross straight at Lukasz Fabianski from an unmarked position eight yards out.

In the 16th minute, John McGinn shot just wide from the edge of the box after spinning away from Tomas Soucek, yet Villa’s improvement was not enough to spare them a tongue-lashing from D|ean Smith during the first-half drinks break. If his instruction was to push his players up the pitch, it did not work as they continued to sit deep, committing nervous challenges in dangerous areas. 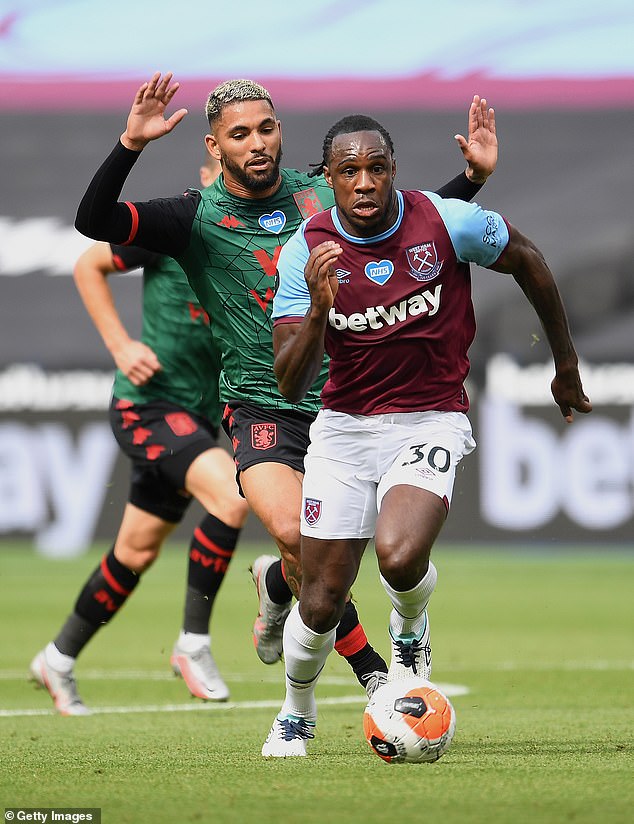 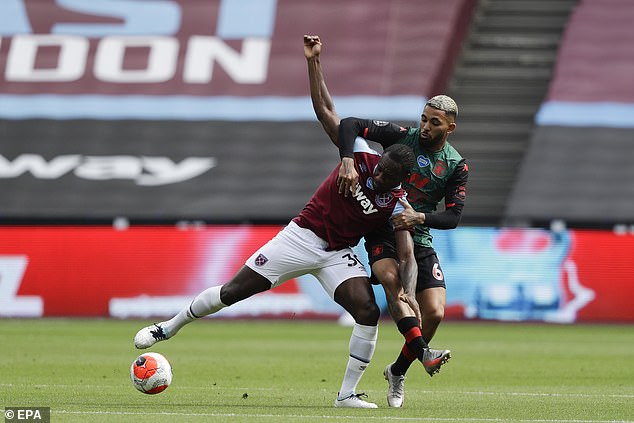 Soucek was making a number of dangerous unchecked runs from deep and from one, he was inches away from meeting Pablo Fornals’ left-wing cross.

With Tyrone Mings and Pepe Reina bellowing instructions, Villa continued to resist and a minute before half-time, Grealish wasted a glorious chance to put them in front. McGinn found space on the edge of the box and picked out Conor Hourihane, who nudged the ball wide for Grealish.

It seemed the perfect angle and was on Grealish right foot yet the strike was weak and too close to Fabianski to worry him. At half-time, Grealish, McGinn and Mings walked off the field in intense discussion.

McGinn and Grealish were crucial to a far sharper start to the second half for Villa, though this time it was McGinn’s turn to miss when he should have scored. Hourihane’s cross from the left was miskicked by Samatta and when it reached McGinn, he could only steer it limply towards goal, allowing Ben Johnson to clear. Even though the ball fell to McGinn’s weaker right foot, he still ought to have done better.

After making that vital block, Johnson showed his quality in attack with two excellent left-wing crosses into the Villa box. Konsa did superbly to head away the first and when the second broke to Mark Noble, he was brought down for a free-kick that substitute Andriy Yarmolenko fired into the side netting.

Smith waited until the second drinks break to make his first change as Keinan Davis, who is still looking for his first top-flight goal, on for Samatta. He may have been envious at the bench experience available to David Moyes, who sent on Yarmolenko and Sebastien Haller at half-time and Manuel Lanzini at the drinks break.

Soon after that pause, Haller headed over from an excellent position after Fredericks had crossed from the right.

Still Grealish was a frustrated figure on the fringes of the game. In a rare burst, he exchanged passes with McGinn from a short corner and charged into the box before delivering a curling effort that was deflected over by Noble.

Moments later, he was involved in Villa’s best move of the match. Following good work from McGinn, Grealish released Davis into space and the substitute’s angled shot eluded Fabianski’s dive but also trickled wide of the far post. Had Fabianski got a hand to it, Trezeguet would have had a tap-in. 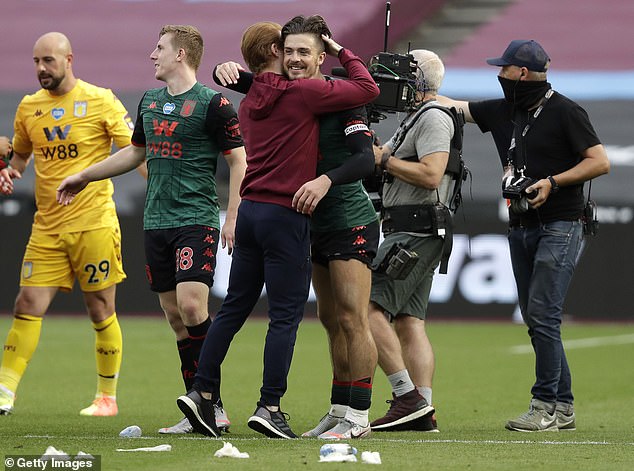 Grealish saved his most important contribution for the 83rd minute. McGinn picked him out on the left corner of the box and the captain took a touch before driving the ball left-footed past Fabianski. It may have taken a slight deflection to deceive the Pole. Villa’s entire playing and coaching staff celebrated wildly, thinking they were safe.

They were not. Two minutes later, Grealish was the unlucky man as Yarmolenko’s shot from the edge of the area clipped his shin and looped over the stranded Reina.

It did not matter. Villa deserved their celebrations at full-time for the work they have done in their last four matches. Their supporters will expect better next season but for now, the feeling of pure relief is more than enough. 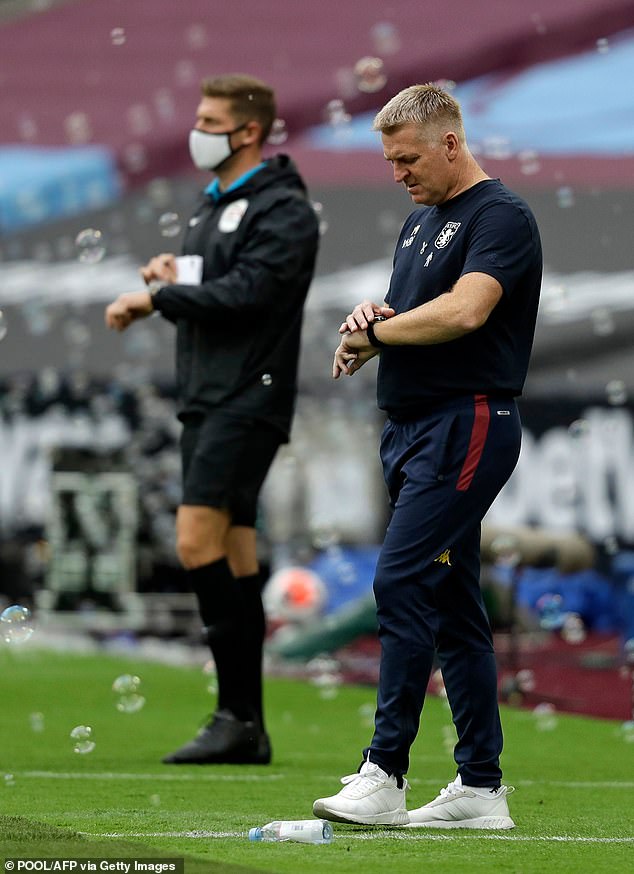 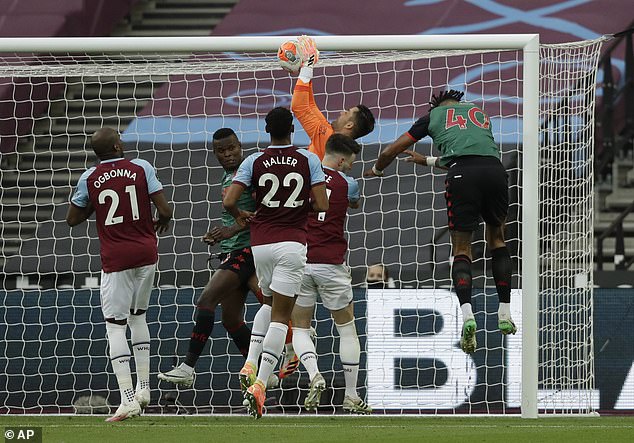