The 20-year-old striker is the latest young talent to emerge off the Red Bull production line and has already attracted a lot of interest from Ajax, Hertha Berlin and Red Bull Leipzig.

Adamu can play on the wing or as a central striker and scored nine goals last season, including one against Bayern Munich in the Champions League. 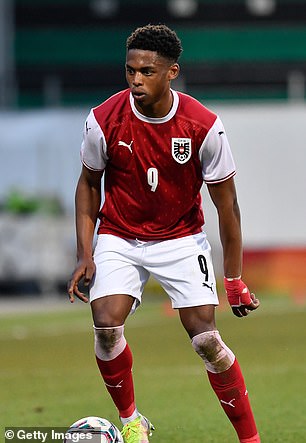 Adamu has one senior appearance for Austria

He is quick, skilful and direct and under contract until 2025.

Brighton have also watched the Nigerian born forward who has been capped by Austria from U18 level upwards.

Salzburg value Adamu around £12million and that could prove tempting for Premier League sides.

West Ham manager David Moyes has been considering a number of forwards and also hopes to wrap up the signing of defender Nayef Aguerd from Rennes this week.

An offer has been made to Jesse Lingard while among the number of options Moyes is juggling are Aston Villa pair Ollie Watkins and John McGinn but such deals will be difficult to pull off.