For 35 years, those who were part of West Ham’s greatest season have rarely had cause for concern.

‘Honestly, I can count on the fingers of one hand the times anyone has called to talk about league form,’ admits Tony Cottee. ‘Consistency has always been the problem.’

Most of the records set when the Hammers finished third in 1986 remain untouched and yet, this year under David Moyes, they are once again on the move with purpose. West Ham are fourth, eyes on a place in Europe and threatening to be the top club in London for the first time since John Lyall’s best vintage chased Liverpool all the way. 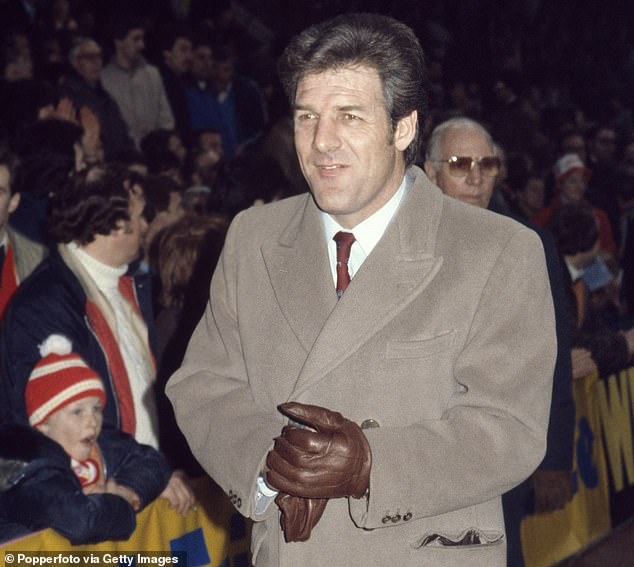 As with this season under Moyes, that campaign didn’t start too well. They lost three of the first four and there were warning signs in pre-season when the awful form culminated in a heavy defeat at Orient and one of the notorious ICF hooligan firm invaded the dressing room.

‘He pushed past the manager and laid into the team,’ recalls defender Tony Gale. ‘He’s going, ‘you’re s*** and so are you, and you’re past it, you’ve got to pull your finger out and God knows why we signed you’. John eventually got him out of the door. We were sitting there in stunned silence when John said: ‘He’s right though, isn’t he?’

Back at the training ground, captain Alvin Martin called a players-only meeting. For two hours they traded in home truths and then burst into a run of 18 games without defeat.

They won nine in a row, inspired by Frank McAvennie, a new £350,000 signing from St Mirren who had been about to sign at Luton until he met the chairman David Evans and took an instant dislike to him. When he found out West Ham were keen, he met Lyall at Toddington services on the M1 at 1.30am. ‘We had to keep it quiet,’ says McAvennie. ‘Luton were paying for the flights.’

He was a midfielder pushed up front when Paul Goddard was injured on the opening day and responded with a blaze of goals, many of them unseen because a broadcasting dispute meant no football was on TV until December. 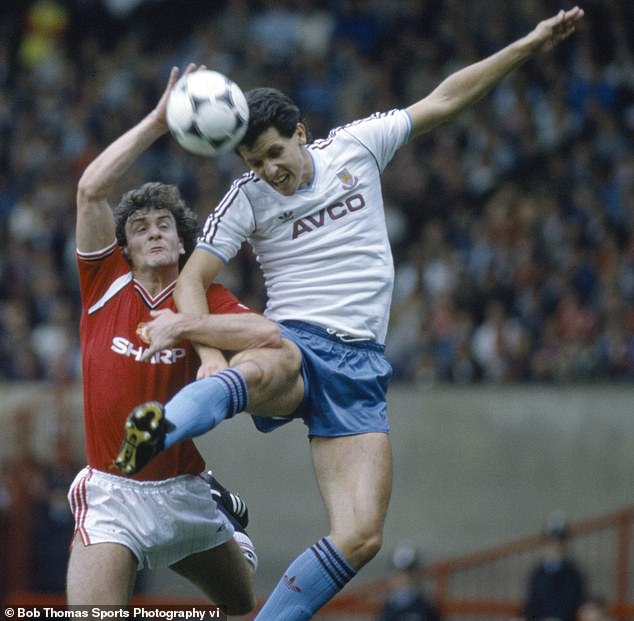 West Ham had started the season poorly with just one win from their first seven games, including a 2-0 defeat at Manchester United where Tony Gale (right) is pictured challenging for a header along with Mark Hughes 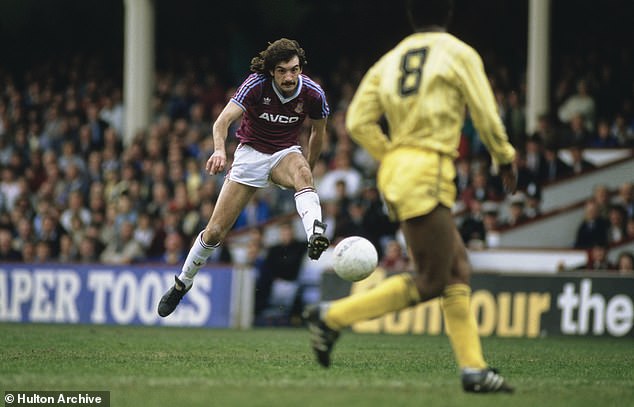 ‘McAvennie was like a secret weapon,’ says Martin. ‘No-one knew him, most people couldn’t pronounce his name.’ The Scot capitalised on his anonymity by throwing himself into a champagne lifestyle. He would have had an alternative view on the accolade of ‘top club in London’.

Alan Devonshire was back after two years injured. ‘He was our best player,’ says Gale. ‘Dev in full flow was world class.’ And Mark Ward, a £250,000 recruit from Oldham, added tenacity in midfield. ‘Over the years, maybe we had become a bit too nice,’ says Martin. ‘Wardy didn’t respect anybody. He was a cheeky little sod who loved to antagonise.’

As illustrated by this clash with Chelsea defender Doug Rougvie. ‘We went sliding towards the corner flag in a tangle,’ says Ward. ‘When we came to a stop, I just pushed my fingers up his nose and pulled as hard as I could. His nose almost came off. There was blood streaming out. Poor old Doug, he was furious. He wanted to kick lumps out of me but it was right in front of the fans and they loved it.’

Lyall and chief scout Eddie Baily drove to Liverpool to sign Ward. ‘His Jaguar only just fit into the road,’ recalls Ward. ‘My wife was in tears because she didn’t want us to leave. John went ‘go put the kettle on son’ and while I’m making the tea I can hear them talking in the other room, he’s soon got her laughing, talking about the West Ham family, how they’ll look after her and how she’d love London.

‘The man had charisma and was true to his word. He’d pick us up after training and drive us around looking for a nice place to live. He was brilliant. You just wanted to play for him.’

Lyall, who died in 2006 at the age of 66, was hugely popular. ‘He would have got along with David Moyes,’ says Gale. ‘They’d talk football all night long.’ 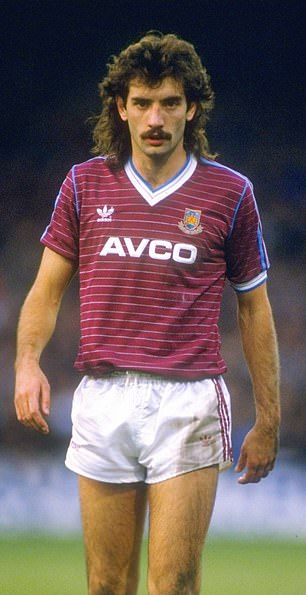 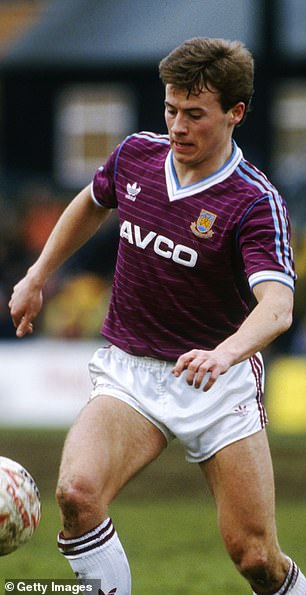 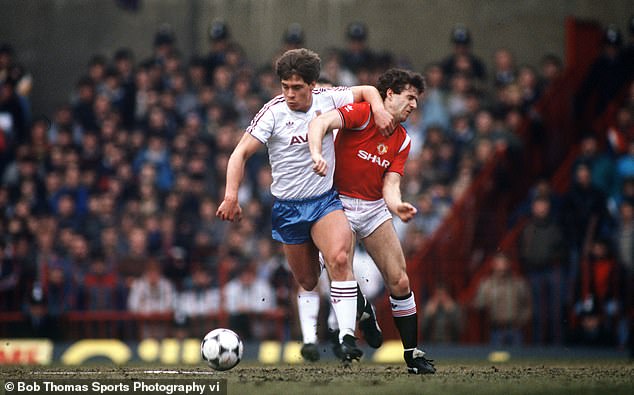 The Hammers went on an incredible run but fixture congestion as well as an FA Cup run saw their form dip in March which would ultimately cost them the title. Pictured above, Cottee battles for the ball with Colin Gibson in an FA Cup fifth round replay win at Manchester United

Seven of that team were awarded testimonials to mark a decade of service at West Ham while Cottee and McAvennie both left but returned, and their legendary status was already secure. Only Everton’s Gary Lineker scored more than McAvennie’s 26 league goals, a haul that included the winner at QPR having just stepped off an overnight flight from Australia following international duty.

‘We touched down at 9.50am at Heathrow,’ says McAvennie. ‘I called John and he said ‘take a couple of days off’. I told him I wanted to play and he said ‘no, you’ve been travelling all night’. I said, ‘don’t worry, staying up all night has never been my problem’. I went straight to the team hotel with my boots, persuaded him to pick me, we won 1-0 and I scored the goal.’

Cottee, inspired by his new strike partner, scored 20 and was voted the PFA Young Player of the Year. ‘Tony just wanted to score goals,’ laughs McAvennie. ‘If I was through on goal and the keeper came out I’d pass it to Tony and if he was through I’d go for the rebound.’

Cottee doesn’t disagree. ‘Frank was a team player’, he says. ‘Everyone talks about the high press now but it’s not new. Liverpool had Ian Rush putting defenders under pressure and we had Frank. I knew I had to respond. I’d been our top scorer for two years but I was still only 20 and I had to work harder.’

An FA Cup run and a winter freeze saw fixtures pile up but West Ham stormed on. They won 4-0 at Chelsea. ‘The moment when the whole country thought, ‘this lot aren’t bad’,’ says Ward. 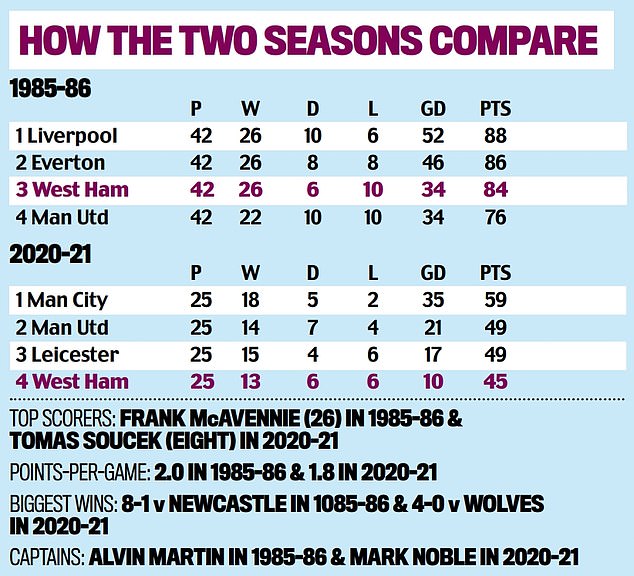 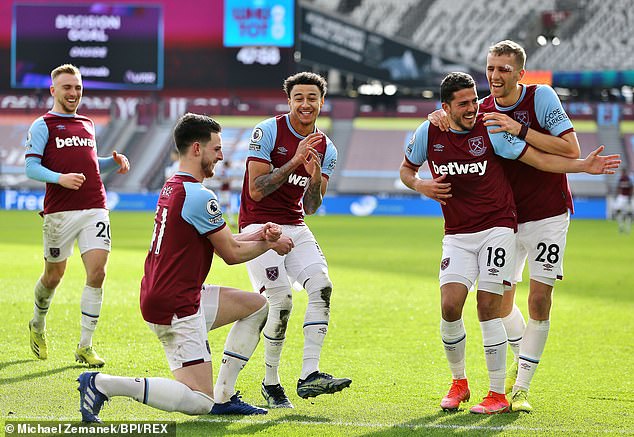 They fired eight past Newcastle, a rout including a hat-trick from Martin, three goals past three different keepers. Peter Beardsley was in goal by the time his third went in from the penalty spot.

‘Ray Stewart was our penalty taker so he picked the ball up,’ recalls Martin. ‘I didn’t care but the crowd started singing my name and more or less forced Ray into offering me the ball. We were 7-1 up and Peter Beardsley wasn’t the most intimidating goalkeeper I’ve faced so I took the penalty.’

Boss Lyall was not impressed. ‘John gave him a rollicking,’ says Gale. ‘He was like, ‘well played for the hat-trick Alvin but Ray’s the penalty taker so don’t f***ing do that again’.’

More than 31,000 crammed into Upton Park to see West Ham fight back from behind to beat relegation-threatened Ipswich in the final home game. ‘The noisiest I’ve heard Upton Park,’ says Gale. ‘Midweek, under the lights and the city boys were in double early. Alan Dickens scored a great goal and Ray Stewart won it with a penalty. The crowd went mad, as did Terry Butcher who kicked the referee’s door in. He was aggrieved about the penalty and, in fairness to Butch, it probably wasn’t a penalty but he went hunting for the referee who bolted himself in his room.’

Title hopes vanished on the final Saturday of the season. The Hammers won at West Brom but Kenny Dalglish clinched the title for Liverpool at Chelsea. 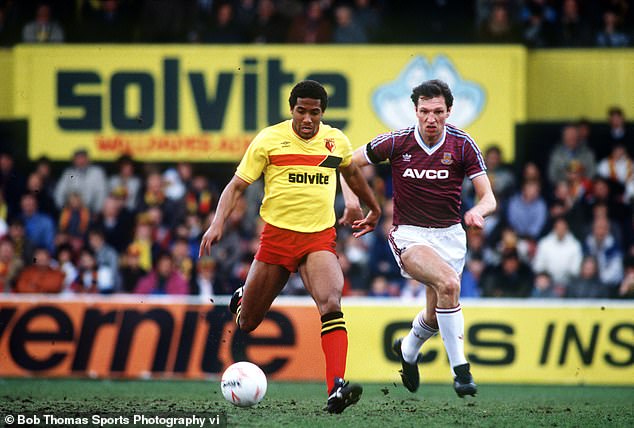 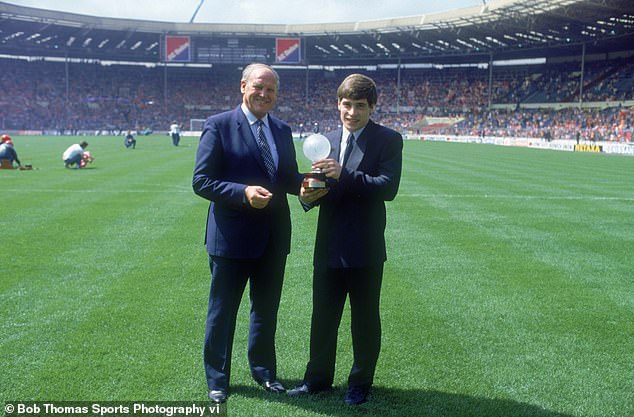 Although West Ham ended the season empty handed, Cottee won the Young Footballer of the Year award as he is presented with the trophy by former Hammers boss Ron Greenwood at Wembley following Liverpool’s FA Cup final victory over Everton

‘A rumour went around that Liverpool were 1-0 down rather than 1-0 up and our fans were jumping around,’ says Gale. ‘We thought we were winning the league.’

Tears flowed. No title and no European football because of the post-Heysel ban. Two days later, still devastated, they lost at Everton who crept past into the runners-up spot.

‘The end of the dream,’ says Cottee. ‘We look back on how special it was but we were the best team in the country and just imagine if we had won it to give the fans a season like Leicester had.’

Gale always insists this West Ham team was better than the Blackburn side he helped win the title in 1994-95.

The medals eluded them but the adventure forged a bond. The ‘Boys of 86’ remain close and when Ward spent four years behind bars on drug charges they got together to provide some financial help.

‘We had an unbelievable spirit,’ says Ward, now working for Capital Water, employed by a West Ham fan. ‘We all just clicked on and off the pitch. Sometimes that happens. Maybe it’s happening again.’