A nightmare resident is infuriating neighbours by keeping 100 bags of rotting rubbish in a garden.

Residents in Doncaster Street, west Hull, claim the foul smell coming from the pile of rubbish is making them feel sick and forcing them to sleep with the windows closed – even in the boiling heat.

Retired steel worker George Brown, 73, says the mound of black bin bags is attracting rats and he and his son have been forced to kill more than two dozen so far.

The mountain of rubbish has been piling up in his neighbour’s back garden since January. The people who live there are council tenants, with officials claiming they are ‘working to resolve the problem’.

But Mr Brown, who has lived in the house next door since 2004, is still unimpressed.

This pile of ‘100 bags of rubbish’ is infuriating neighbours in Doncaster Street, west Hull 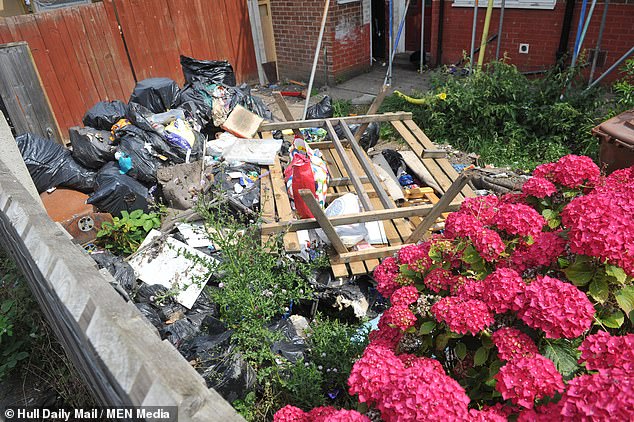 The mountain of rubbish has been piling up in the back garden since the council, who own the property, cleared the area in January

He said: ‘This is a living hell, it really is. It gets you right at the back of your throat and makes you feel really nauseous.

‘They just need to get someone to come and get rid of it and clean it.’

Mr Brown claims he has begged his neighbour to get rid of the rubbish, but the bags have continued to mount up regardless.

He says the problem started after Hull City Council workers cleared the garden at the beginning of the year.

He continued: ‘It’s crazy. I can’t believe the amount of rubbish there is there – it is unbelievable, it really is.

‘It has to be seen to be believed. My other neighbour and his son killed 24 rats, big and little ones, ones with huge long tails the other week. That’s 24 – blimey. 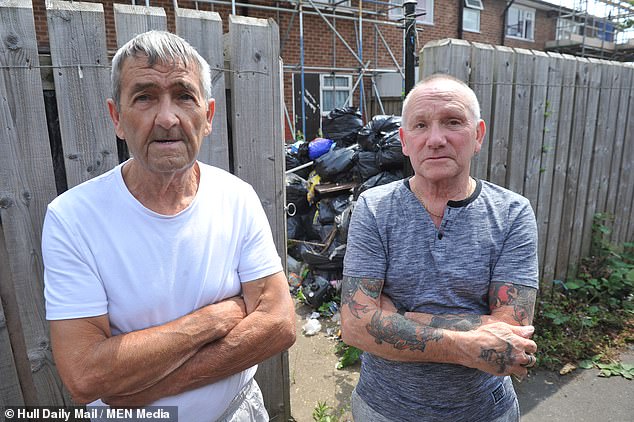 Retired steel worker George Brown, 73, (right) says the mound of black bin bags is attracting rats and he and his son (left) have been forced to kill more than two dozen so far

‘The rubbish is pouring out and it uncovered some rats to escape and run out down the alleyway at the back of the houses where we take our bins.

‘It’s just going to get worse and worse – I can’t see anything being done about it.

‘It’s making me feel sick and it makes me not want to go outside.’

A Hull City Council spokesman said: ‘We are aware of the issues at the property and have been working with the family to resolve them.

‘If residents have any concerns about issues in their neighbourhood, they can contact the council directly on 01482 300300.’

But Mr Brown added: ‘It was cleared out by the council, and good for them, but they shouldn’t really have to be doing it every six months.

‘They should just put it in a bin and put their bin out every week – it’s just lazy, and it stinks.

‘The stench is literally unbearable. It’s just rotting. Horrendous doesn’t even cover it.’

The neighbour concerned refused to comment when approached by MailOnline. 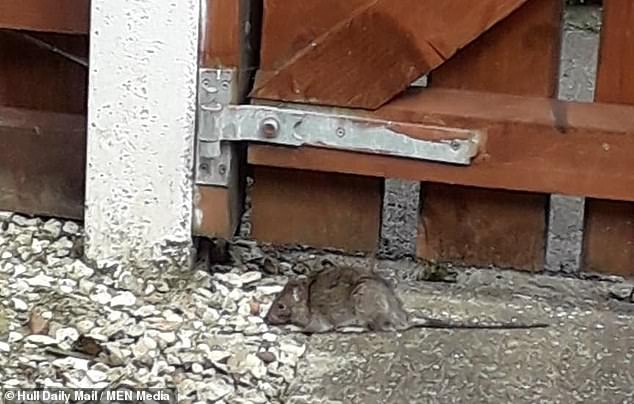 Mr Brown took this picture of a rat, which he claims is one of dozens that have appeared as a result of the rubbish 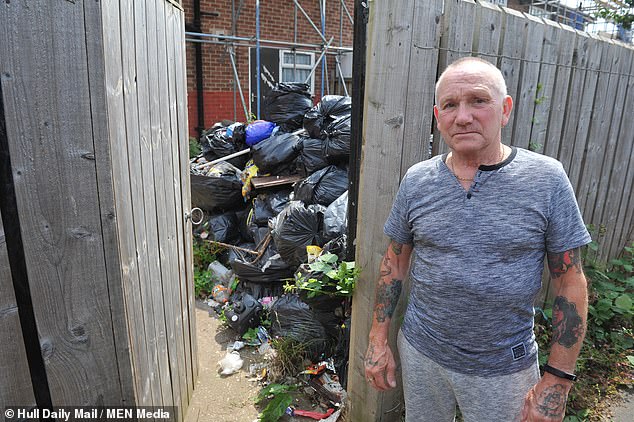 Mr Brown (pictured) claims he has begged his neighbour to get rid of the rubbish, but the bags have continued to mount up regardless.