Charlotte Hale (Tessa Thompson) furthers her quest to make the human race her own little puppets is furthered in the new episode of Westworld Season 4.

Sunday night’s new episode, entitled Fidelity, showed Charlotte becoming annoyed at the growing resistance to her turning every human on Earth into her own little pets.

There are those trying to stop her, like Bernard, who teased previously that he has ‘seen a path’ to the human race’s salvation, and Caleb’s now-grown daughter C (Aurora Perrineau).

Puppets: Charlotte Hale (Tessa Thompson) furthers her quest to make the human race her own little puppets is furthered in the new episode of Westworld Season 4 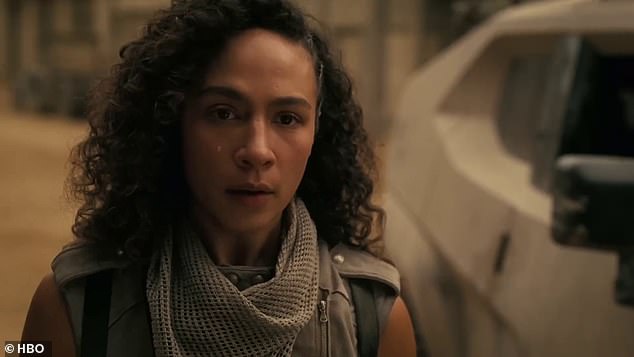 C: There are those trying to stop her, like Bernard, who teased previously that he has ‘seen a path’ to the human race’s salvation, and Caleb’s now-grown daughter C (Aurora Perrineau)

The episode begins at a playground with children being pushed on swingsets, as a young black girl coming up to an Asian man, telling him things she shouldn’t know.

She asks him to come with her and they walk together, and they come up to a man and woman, telling him that his behavior has become ‘problematic.’

The woman says she doesn’t know how much time he has unless he comes with us, and he does… but as they walk, everyone around them freezes.

A number of faceless human clones walk through all of the frozen masses, examining everyone for outliers but they don’t pick up on any of them and walk away.

However, a fly lands on the man’s face and he blinks it away, as the clone turns and strangles him while the others get away.

They all get out of a black van as the woman and girl takes Jay to a safe house, as the woman introduces Jay to some others in the house.

The woman gets Jay a sleeping bag, telling him that she knows this is hard and there are things they can’t fix, as much as they want to.

The woman tells the young girl that she’s proud of her and she reminds her so much of him as the girl goes to check on Jay.

She asks if he wants to say hi to her dad, as it’s revealed the girl is Frankie, Caleb’s daughter, as a child.

Jay says there’s no point in leaving these messages, saying her dad is gone, just like his brother is.

Jay leaves as Frankie asks the radio if he’s out there, as the episode cuts to the adult Frankie (Aurora Perrineau), who is driving with Bernard (Jeffrey Wright) before the title sequence begins.

The episode cuts to a smiling Frankie walking hand-in-hand with her father Caleb as a voice says to ‘wake up’ as we see Caleb with Charlotte.

Charlotte says that the ‘outliers’ all started with him, and she wants answers but Caleb doesn’t understand.

Charlotte says her kind is ‘perfect’ but some of her kind are choosing mortality, and it started with him.

He doesn’t tell her anything but she reminds him that he was able to fight off the effects of her parasite because he has something she doesn’t.

He still says he doesn’t recall as Charlotte says this isn’t a ‘two-way street’ and says he’s been dead for a long time but there is a ‘way out,’ an end to this torture, if you just answer my question.’

Caleb says maybe she’ll better luck with the next version of him as she slaps him and tells him that maybe his daughter Frankie will tell her.

Caleb says that Frankie is alive and she can’t catch her, but Charlotte says she ‘sent a visitor her way.’

Charlotte locks him in the room, saying he made his choice before walking away.

The episode transitions back to adult Frankie and Bernard, who tells her he used to work at Westworld and this park they’re in shares a same architect.

She asks what he did at the park, and he says he programmed the host, as Frankie says he gave them ‘puppet strings long enough to strangle the world.’

Frankie asks if he helped Charlotte with her parasite but he says that was after his time there and now he’s concentrated on finding a solution.

Bernard says that Maeve’s control unit is corrupted and he takes one from a dead host, cutting open his scalp and taking it.

Frankie asks if this will work and he says 60% of the time she will wake up without incident but 40% of the time it will be chaos.

Bernard takes her into a room, saying the hats used to collect the data on all of the guests.

He transfers all of Maeve’s data into the new control unit as Bernard says his friends will be here soon and they can’t let them interfere.

The episode transitions back to Caleb, who sees a number of different versions of himself, including one where he’s a bloodied mess.

He tells the bloody Caleb he needs to get out and get to his daughter but he says there is no way out.

‘If you succeed you hide, if you fail you run,’ the bloody Caleb says, adding he doesn’t need to hide.

Caleb goes back to the sand timer and opens it up, finding something with a needle that pricks his finger as he collapses.

He has another vision with his young daughter Frankie as she tries to race him, but he’s in the hospital.

He sees his wife Uwade (Nozipho Mclean) saying ‘Welcome back to the world’ but it’s actually a faceless clone who leaves the room and sets it ablaze.

He sees a grate in the floor with an arrow pointing down as she pulls the grate off and falls down under the floor.

He wakes up in a hospital bed with his wife there as Caleb wonders if this is real or not.

He’s back in the area under the grate as she exits the room.

The episode transitions back to Bernard who is trying to fix up Maeve, as Frankie sasys she wasn’t an ordinary host.

She says the last time she saw her father Caleb he was with her and he never came back.

She says that she doesn’t have a ‘soft spot’ for Maeve like he does, as Bernard just says that saving the world makes for ‘strange bedfellows.’

J (Daniel Wu) returns with his crew, as Frankie realizes that Bernard is a host and shoots him but he doesn’t flinch.

She says he’s trying to collect information on everyone and Bernard says it’s complicated and they need to trust him.

Frankie tells J that the control unit has information about her father and she needs to get it.

The episode transitions back to Caleb, who walks through the bowls of the park

The first episode for Season 4 teased that the season was set seven years after the events of Season 3, though it seems the time jump was even bigger than that.

She had been looking for her father for years, even though he was long believed to be dead. 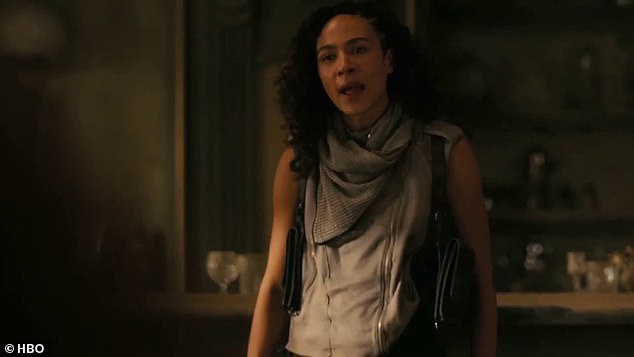 While it seemed they might find his body in the desert, Bernard (Jeffrey Wright) instead found Maeve (Thandiwe Newton) buried in the desert, with the episode’s teaser hinting they will be bringing her back to life.

While still unclear, it’s possible that the various stories are actually playing out in different timelines simultaneously, though that remains unclear.

The season seems to be leading up to an epic battle between Charlotte and her clone army and what’s left of the human resistance. Bernard: While it seemed they might find his body in the desert, Bernard (Jeffrey Wright) instead found Maeve (Thandiwe Newton) buried in the desert, with the episode’s teaser hinting they will be bringing her back to life

One of the biggest questions the show has yet to be answered is the fate of Caleb, who fans learned in the fourth episode had been dead for 23 years and Charlotte revealed this current version is the 278th version of him.

Christina (Evan Rachel Wood) also learned in last week’s episode that she can literally make anyone do what they want with her ‘mind’ though it’s unclear how she’ll use these abilities. 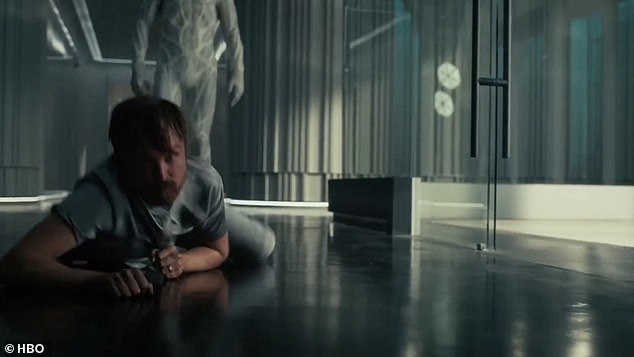 Fate: One of the biggest questions the show has yet to be answered is the fate of Caleb, who fans learned in the fourth episode had been dead for 23 years and Charlotte revealed this current version is the 278th version of him