Temperatures dropped to -59C this week in the world’s coldest region – where wet clothes freeze solid within moments – but residents of the Siberian town say it’s mild by their standards.

A series of amazing pictures have emerged of Siberians having fun in recent days despite temperatures in the Russian wilderness dropping below minus 50C.

Schoolteacher Galina Davydova in Yakutia – the world’s most perishing permanently inhabited region – shows how her washing freezes in seconds to turn into impressive ice sculptures.

Her noodle lunch suddenly becomes indigestible in the Russian sun. 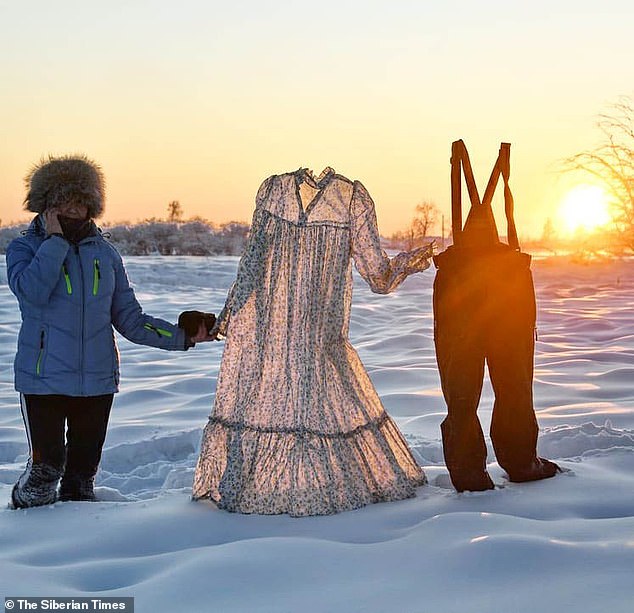 Davydova can be seen holding the clothes, which froze within minutes of being left outdoors, in Yakutia, Siberia last week 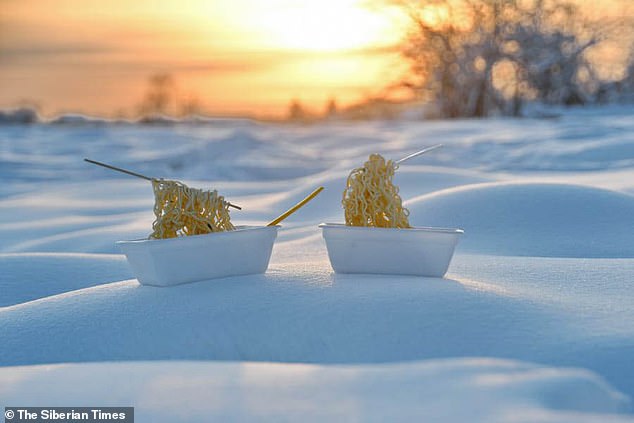 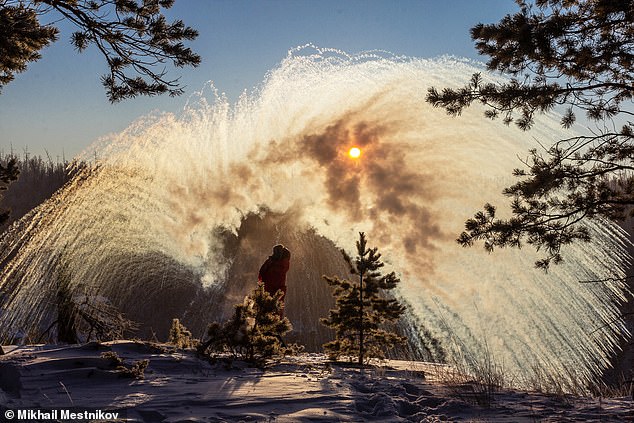 A ‘firework’, created by throwing hot water in the air, can be seen in Siberia last week

In temperatures of below minus 40C he makes firewater lollipops from Russia’s national drink for tourists in this furnace of cold.

He was this week escorting a pioneering Cold Conquerors expedition for people wanting to experience Siberia’s lowest temperatures. 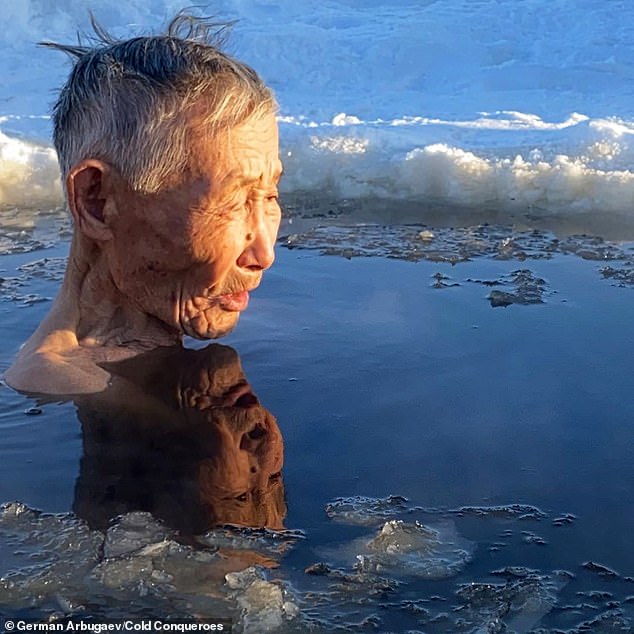 An elderly man ice swims in an ice hole outside the village of Churapcha, Yakutia last week 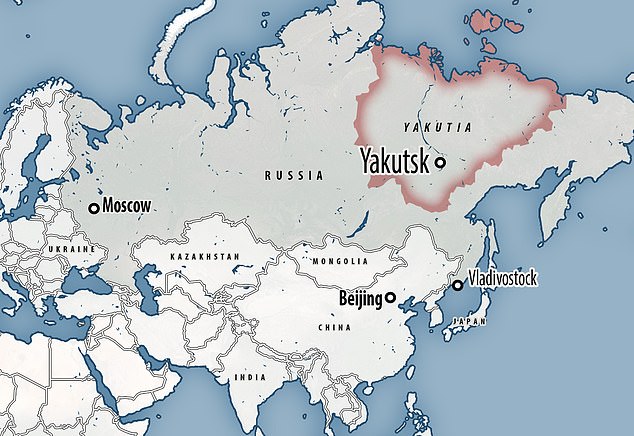 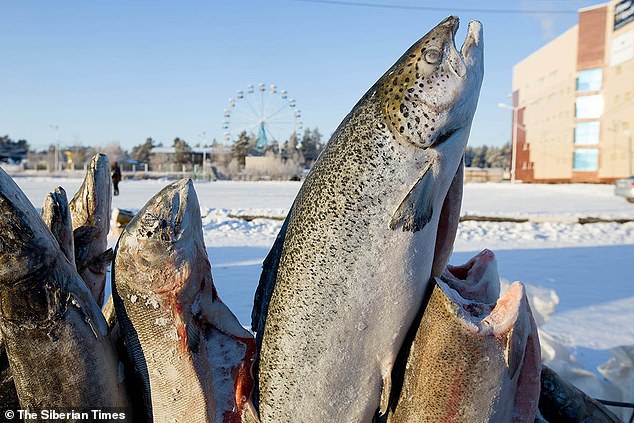 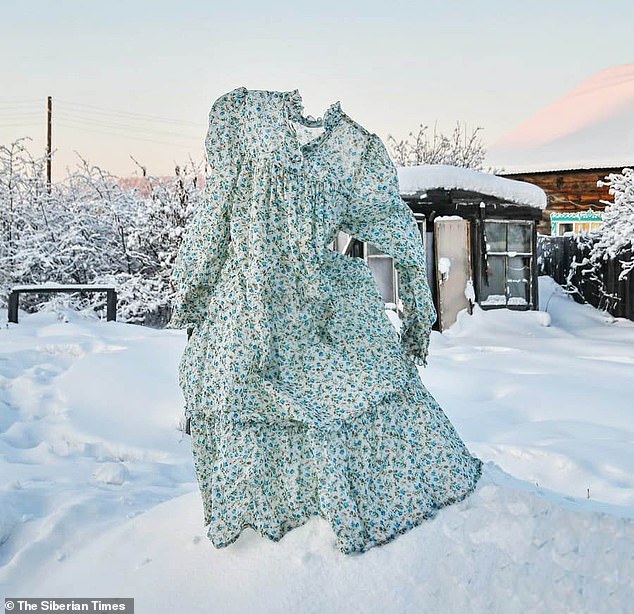 Clothes freeze within minutes of being left outside at temperatures of -35/40C, as seen outside Yakutia last week 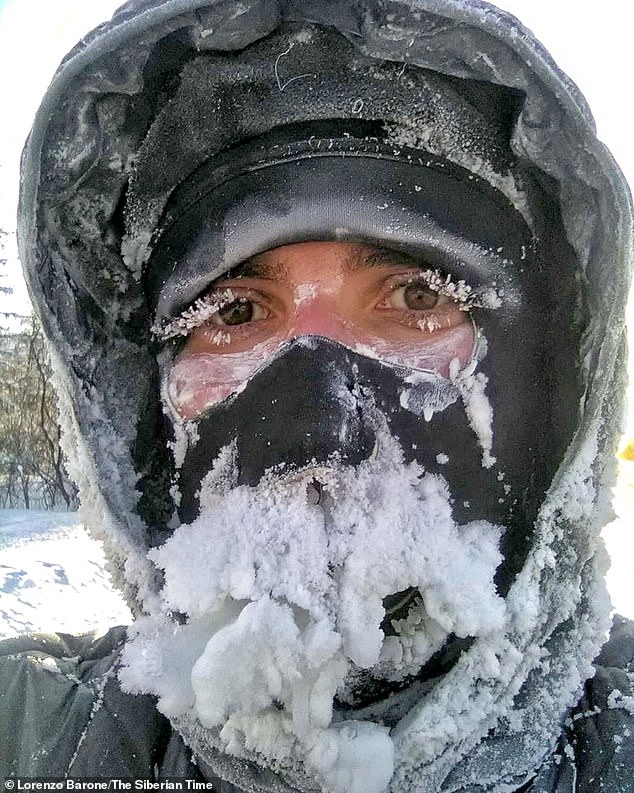 Locals have complained this year that the winter is mild and a report that the world’s coldest village Oymyakon had hit below minus 70C was exposed this week as fake news by Russian state meteorologists.

Some blame global warming but today Verkhoyansk – which makes its own claim as the coldest settlement on the planet – hit minus 59C.

Winters here usually plunge into the minus 60s. 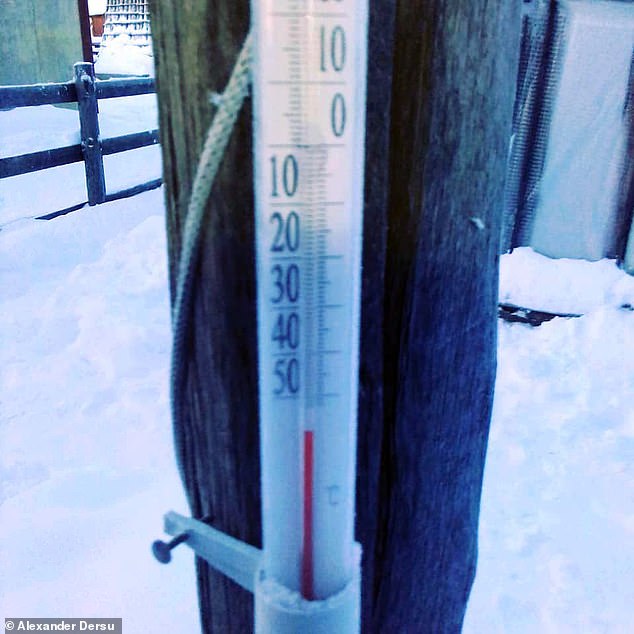 A thermometer can be seen plunging below the -50C mark in the village of Namtsy, Yakutia 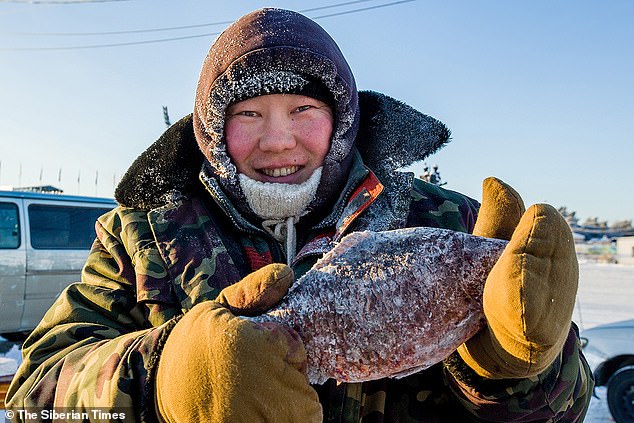 A vendor holds a frozen fish at an outdoor fish market in Yakutsk last week. The market stays open even when air temperature drops below -50C 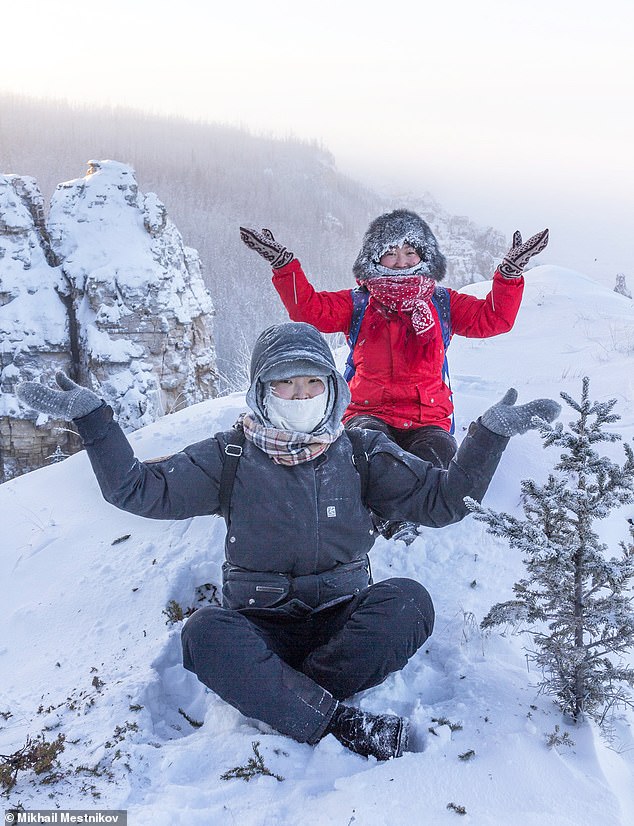 No matter how cold it gets Siberian ice swimmers enjoy their winter dip, claiming it is essential for good health.

And the cold is ideal for ‘ice fireworks’ – made by throwing hot water into the cold air.

Primary age children in regional capital Yakutsk were told to stay home because temperatures plummeted to minus 45C. 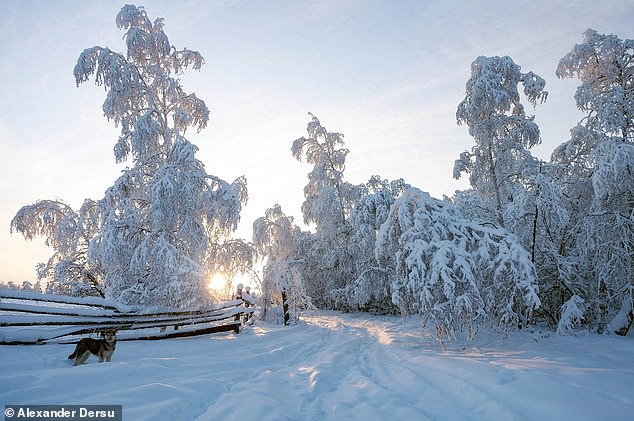 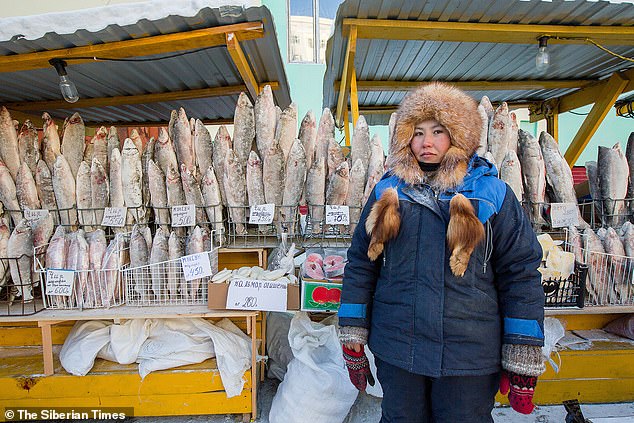 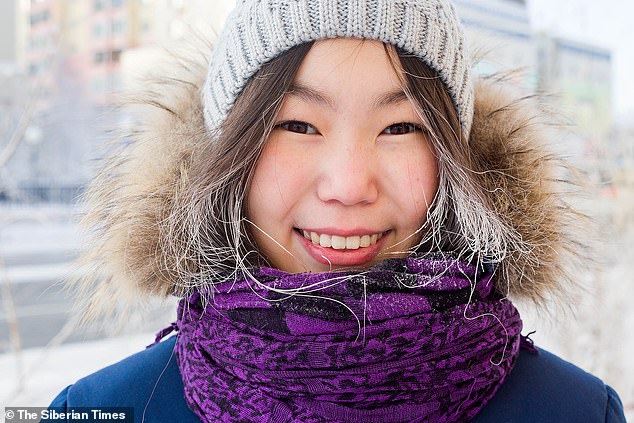 A woman smiles in the regional capital of Yakutsk, where temperatures dropped below -50C this week

But secondary students were still expected to attend classes, reported The Siberian Times – which revealed the amazing winter pictures from this permafrost region.

And never mind how cold it gets, the outdoor fish market is always open.

‘It’s so cold here that eyelashes freeze if you’re not careful, and spectacles can become glued to the faces of wearers by the intense frost,’ said the report. 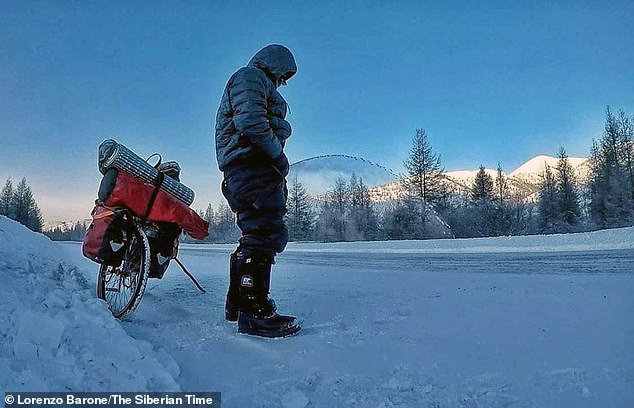 Italian 22-year-old daredevil traveler Lorenzo Barone tries to answer a question that intrigues many people about the deep cold, describing and showing in graphic detail what happened when he relieved himself in Yakutia last week 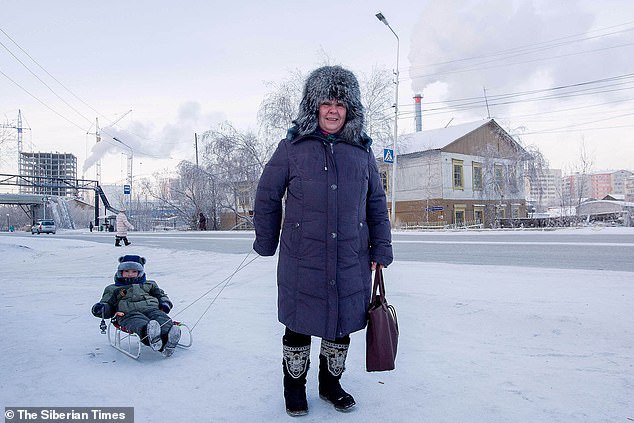 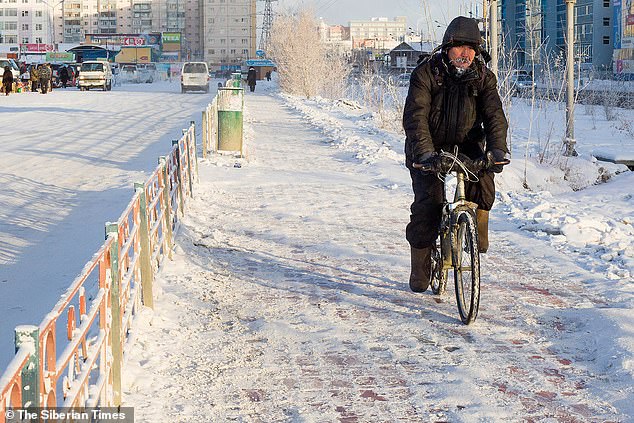 An elderly man bikes through Yakutsk in January 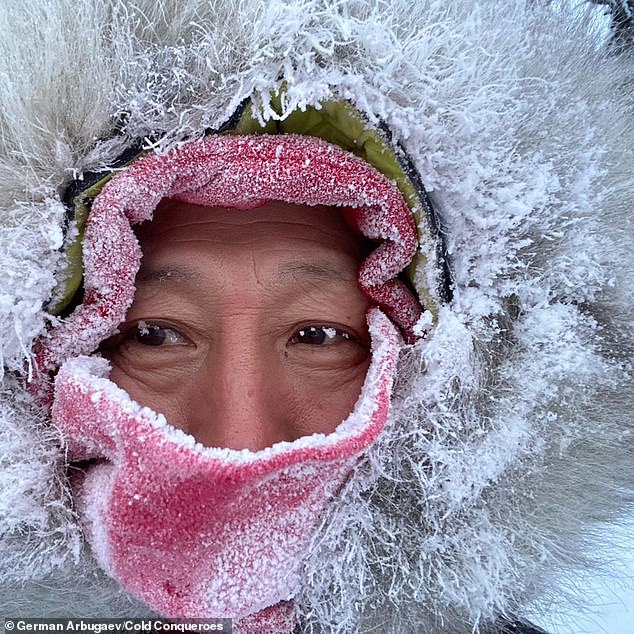 A member of the Cold Conqueroes expedition Yakutia last week 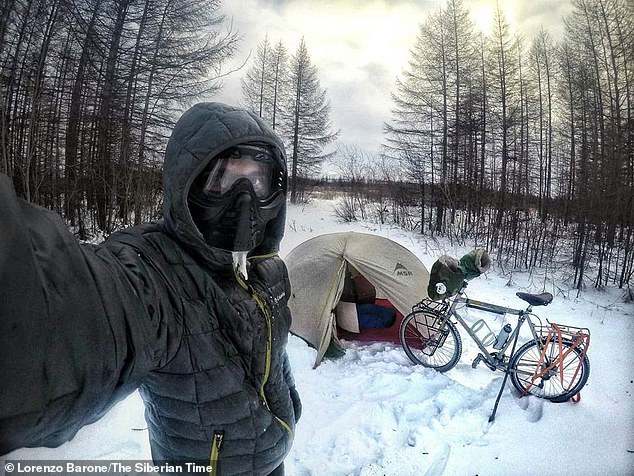 Meanwhile an Italian tourist Lorenzo Barone cycling around Siberia answered a question that intrigues many people about the deep cold, describing and showing in graphic detail what happened when he relieved himself.

As he posted: ‘PEEING AT -41°C It is possible to pee at -41 ° C! You asked me many how I do it, well .. quickly! otherwise it disappears from my hands and runs away! Also yes, I confirm that as in the photo part of the pee freezes in the air .. satisfied for the answer? ‘ 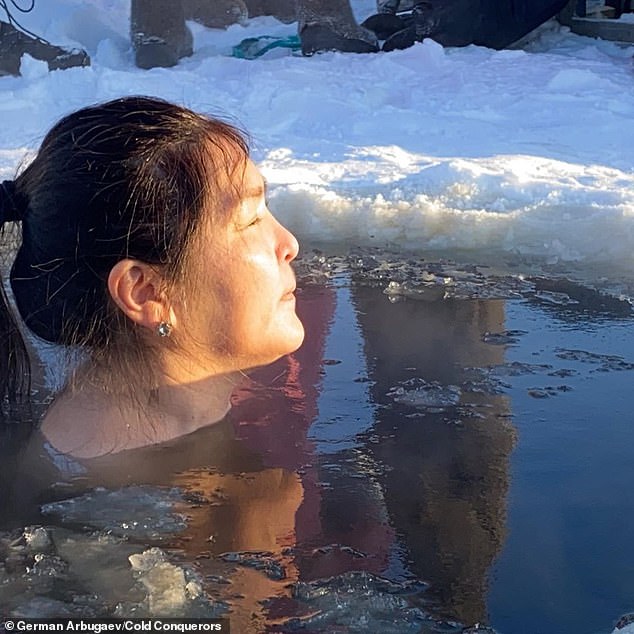 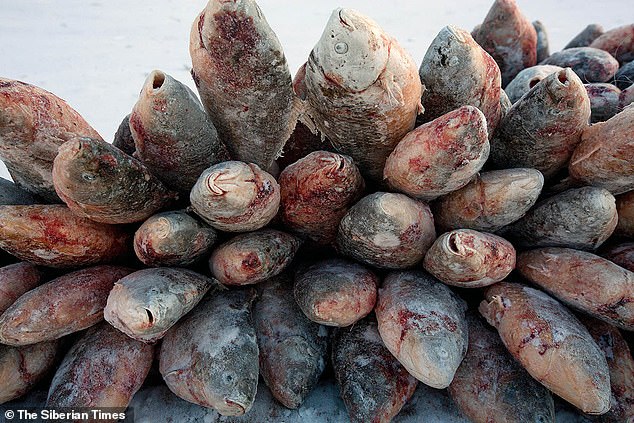 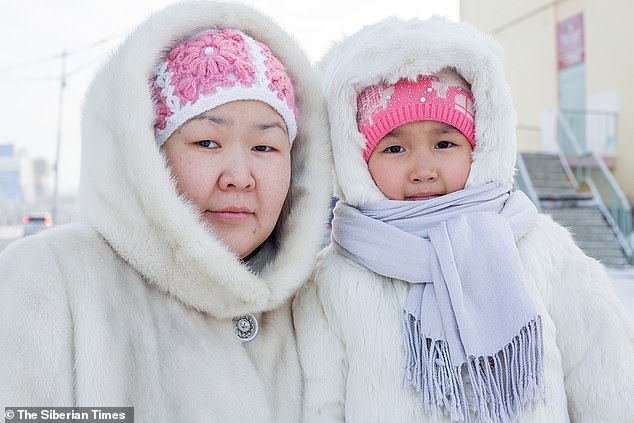 A mother and daughter can be seen last week in Yakutsk