We’ve already ‘busted the planet’s budget’: Earth Overshoot Day is earlier than ever before in 2022

As of today, humans have already used a year’s worth of natural resources in 2022 – a calendar event known as Earth Overshoot Day.

The annual date marks the point at which humanity has used all the biological resources that the Earth can regenerate during that year.

But in 2022 it’s earlier than ever before, largely due to a demand for food, land, timber and new urban infrastructure to cater to a growing population.

Demand for these resources outstrips the Earth’s biocapacity – its ability to renew those resources – meaning we now effectively have gone into overdraft. 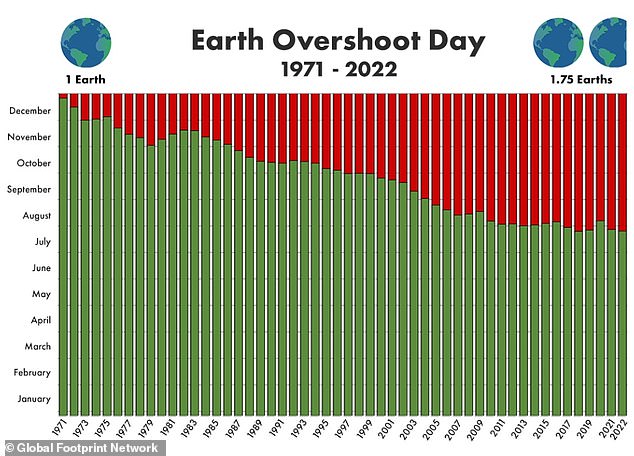 Humans ‘busted Earth’s budget’: Earth Overshoot Day is earlier than ever before this year (Thursday, July 28)

WHAT IS EARTH OVERSHOOT DAY?

Earth Overshoot Day marks the point at which humanity has used all the biological resources that the Earth can regenerate during that year.

This year, it’s on July 28. So in under seven months, humans have use more natural resources than the planet is able to produce in a 12 month period.

For the remainder of 2022, we will be living on resources borrowed from future generations.

It is calculated by dividing the world’s biocapacity – the amount of natural resources generated by the planet that year – by humanity’s natural consumption of Earth’s resources for 12 months.

It is then multiplied by 365, the number of days in a year.

The concept for Earth Overshoot Day was created by Andrew Simms, climate economist at Global Witness, a London-based think tank.

Earth Overshoot Day – which is hosted and calculated by Oakland, California-based sustainability think tank Global Footprint Network – came more than a month later than usual in 2020, due to global lockdowns imposed because of Covid.

But last year it was back to the end of July, and this year it’s earlier than it’s ever been, since the annual date was launched in 2006.

Mathis Wackernagel, President of Global Footprint Network, said humans use 75 per cent more biological resources than Earth can regenerate – as much as if we lived on 1.75 planets.

But if humanity can ‘move the date’ of Earth Overshoot Day by six days every year, humanity will be able to push this rate to below ‘one planet’ before 2050.

‘One planet is the regenerative capacity of the entire planet Earth,’ Wackernagel told MailOnline.

‘This is our physical budget. We also want to share it with wild species, so we humans may not want to use the entire budget.

‘Currently we consume at least 1.75 fold that, meaning we leave as if we had 1.75 Earths at our disposition – hence we witness depletion.’

‘We are at a crossroads. With every tenth of a degree of warming, we choose to inflict more economic damage and pain on ourselves, our businesses and communities, our children and their children.

‘This is a moment of massive decision and consequence, whether we choose to see that or not. The more we emit now, the more expensive and radical the actions we will require in a few years.’ 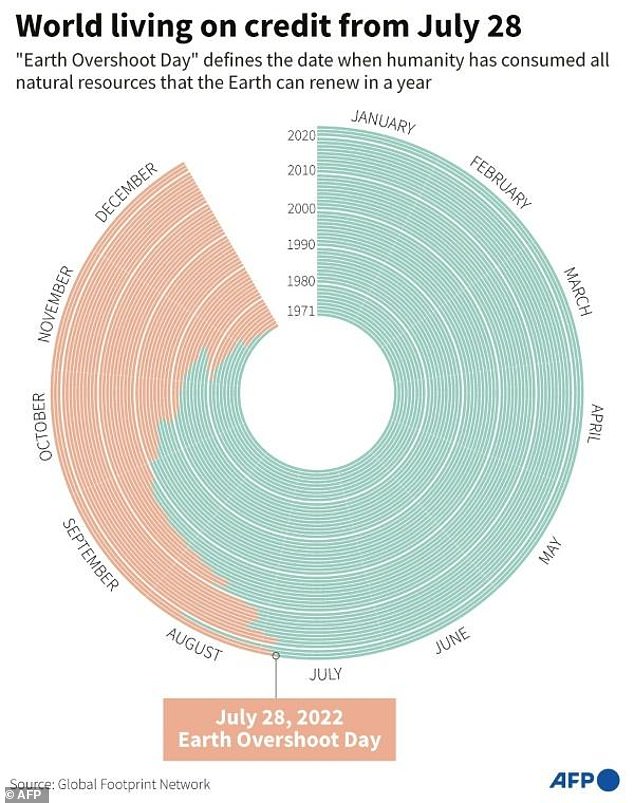 The date of Earth Overshoot Day changes every year, based on how much of Earth’s natural resources humanity is using.

It’s computed by dividing the planet’s biocapacity – the amount of ecological resources Earth can generate that year – by humanity’s demand for that year, known as our ecological footprint, and multiplying that figure by 365, the number of days in a year.

If the global population’s demand for ecological assets exceeds the supply, it runs an ecological deficit.

For example, humans plant around 2 billion trees in a year. Earth Overshoot Day marks when we’ve used up 2 billion trees, for timber or to clear space for rearing cattle.

For the rest of the year after Earth Overshoot Day, humanity has to cut down other trees to cater to demand – meaning at some point in the future all of Earth’s trees will eventually be used up.

Although Earth Overshoot Day only started in 2006, researchers have used data to backdate the milestone going back as far as 1971.

Back in the 1970s, Earth Overshoot Day did not come until November or December, but the date has since come sooner and sooner at an alarming rate.

‘Not one person or company should feel they are excluded from this issue,’ he told MailOnline.

‘The food we eat, the packaging that is used, the energy that we use or clothes that we wear – they are all contributing to the speed at which Earth Overshoot Day comes.’

Russell said members of the public can do their bit by walking or cycling to work, removing meat from their diet one day a week, and opting for reusable water bottles instead of buying plastic bottles.

Emily Tradd, climate project manager for Net Zero Now, added that it will be important for the public to vote for leaders who support ‘real climate action’.

Global Footprint Network also this year calculated when Earth Overshoot Day would arrive if all the world’s population consumed resources as fast as a single country.

If the world had Qatar’s consumption habits, the day would come on February 10 – making the Arab country the world’s worst offender for plundering the world’s resources.

Renowned for its mass consumption habits, the US had the joint third-soonest date, along with the UAWE and Canada – March 13 – while the UK registered 32nd on the list with May 19.

Poverty-stricken Indonesia consumes resources less rapidly than any other country, meanwhile, and if we all lived like Indonesia, Earth Overshoot Day would arrive on December 20. 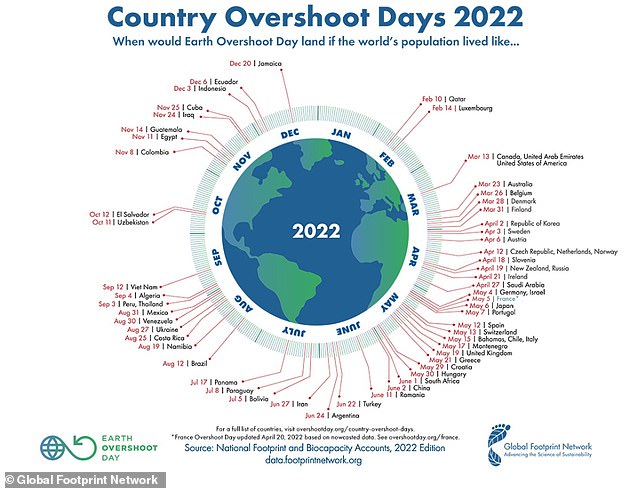 Graphic shows when Earth Overshoot Day would fall if the world consistently consumed resources as fast as different nations. The UK is listed 32nd on this list, with a date of May 19

Topping told MailOnline that certain companies and countries have had ‘an outsized impact on the current climate crisis’.

‘This is important to recognise, particularly when considering the future of developing countries – many of which have historically contributed the least in terms of emissions and are often the most vulnerable to the impacts of climate change and the nature crisis,’ he said.

‘Tackling climate change is in many ways everyone’s responsibility and the more we can act together, the more holistic the solutions will be, the faster they will be implemented and the more inclusive and fair that deployment will be.’

Richard George, senior campaigner for Greenpeace UK, previously told MailOnline that the problem is big commercial companies that ‘find, extract and use resources as quickly as possible’.

‘Responsible companies are torn between doing the right thing and competing with big businesses refusing to change course without government action,’ he said.

‘Unfortunately, our government is sitting on its hands instead of leading from the front.’ 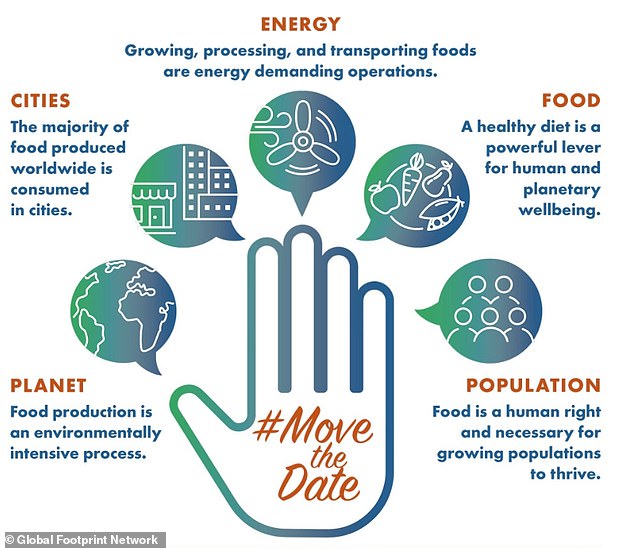 Global Footprint Network is urging people to ‘move the date’ of Earth Overshoot Day, which is driven by energy consumption, food production and more

Helena Bennett, head of climate policy at Green Alliance, said: ‘While we can all play a role in reducing our own impact on the planet, ultimately the government needs to ensure green choices are easy and cheaper for the public to make.

‘Due to rising gas prices, energy bills are set to soar this winter and people are rightly concerned.’

‘But many of the solutions to cut emissions can also deliver cost savings: insulating buildings means less energy is needed to heat our homes and expanding renewable energy will reduce our reliance on importing Russian oil and gas.’

Dates as follows are when Earth Overshoot Day would fall if the world consistently consumed resources as fast as different nations:

If the world consumed resources at the same rate as the following five nations, Earth Overshoot Day would fall much later in the year: