WH insists it had nothing to do with Puerto Rico deal

Interior Secretary Ryan Zinke says he had ‘absolutely nothing to do’ with a $300 million contract the Puerto Rican government awarded to a two-person firm that shares his hometown.

Zinke said the charges against him are ‘baseless’ in a Friday afternoon statement that harangued the political operatives working against him and the ‘dishonest’ media.

‘I welcome any and all investigations into these allegations,’ he said, ‘and encourage the Interior Department’s Inspector General to investigate this matter fully.’

Rep. Raul Grijalva of Arizona, the leading Democrat on the House Natural Resources Committee, is calling for a probe of the contract. The vast majority of Puerto Rico’s 3.5 million people remain without power.

The president met with Interior Secretary Ryan Zinke this morning in the Oval Office. Their talk was closed to press.

Trump’s meeting with the Cabinet secretary came at a time of intense scrutiny for Zinke, who had said through a spokeswoman that he did not put his thumb on the scale for a small Montana electrical firm that won a massive bid to restore parts of Puerto Rico’s electrical grid.

Zinke finally spoke out on his own behalf Friday after the subject came up repeatedly at the White House’s daily press briefing.

‘I had absolutely nothing to do with Whitefish Energy receiving a contract in Puerto Rico,’ a statement read. ‘Any attempts by the dishonest media or political operatives to tie me to awarding or influencing any contract involving Whitefish are completely baseless.’

He contended that ‘only in elitist Washington, D.C. would being from a small town be considered a crime’ and pledged that the paper trail would see him cleared.

‘Neither myself nor anyone in my office has advocated has advocated for this company in anyway,’ Zinke’s statement, which he posted on Twitter, said.

It was only after the contract went through, Zinke says, that he had any sort of conversation with Whitefish.

The White House insisted Friday that it was not involved in the award, either.

Spokeswoman Sarah Huckabee Sanders distanced the administration from the controversy in her news conference, saying it had ‘nothing to do with this contract’ to rebuild the territory’s electrical grid that’s now under audit.

‘This is a contract that was determined by the local authorities in Puerto Rico, not something that the federal government played a role in,’ she said. 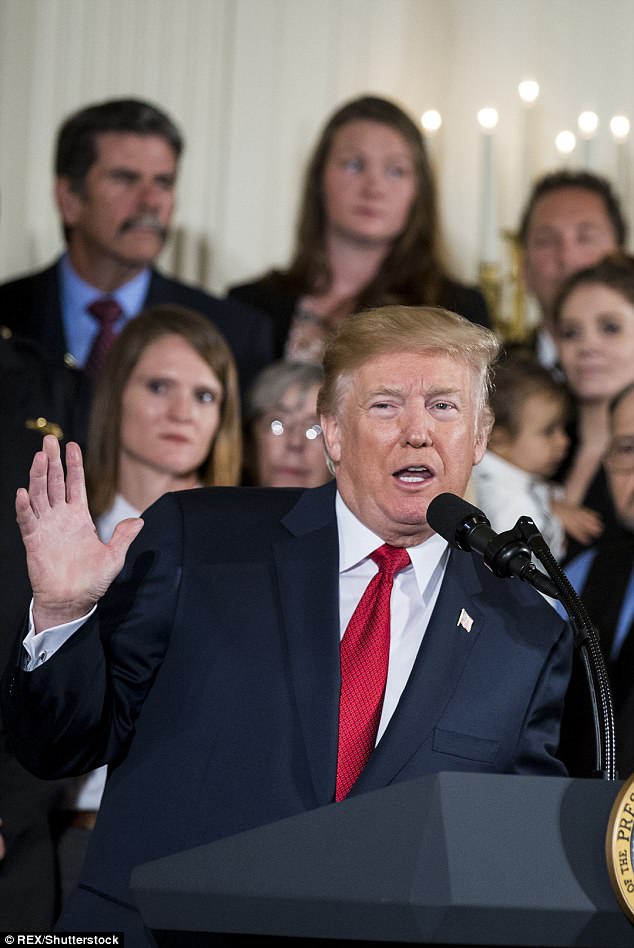 The president met with Interior Secretary Ryan Zinke this morning in the Oval Office. Their talk was closed to press. Trump is seen yesterday at an East Room event that Zinke attended

The energy source was demolished in hurricanes that blew through the Atlantic at the end of the summer.

Zinke claims that his knowledge of the Montana company, Whitefish, that had two employees at the time of the award was limited to their coexistence.

Whitefish is not only the name of the company but also the same, small town of 6,000 people that the former Montana lawmaker hails from.

Zinke’s son once worked for Whitefish during a summer break. The company’s CEO, Andy Techmanski, admitted that he knows the interior secretary, although according to Zinke’s people it is a town where ‘everybody knows everybody.’

Huckabee Sanders said Friday that Trump ‘did ask Secretary Zinke, just for clarification purposes’ about the contract ‘and he reiterated once again that we have no role – the federal government – and specifically he had no role in that contract.’

‘The federal government, as I said, has nothing to do with this contract or the process. This is something solely determined by the Puerto Rican government. And as I’ve said, we’ll look forward to the audit to see if there are any other issues beyond that,’ Trump’s spokeswoman said.

The company had just two Energy Department contracts under its belt when it won the award. One was for just $172,000.

Under the contract, subcontractors would get $462 per hour for a supervisor, $319 for a lineman, plus accommodation fees of $332 per worker and $80 per day for food.

The island is billions in debt, with about 80 per cent of residents lacking power. 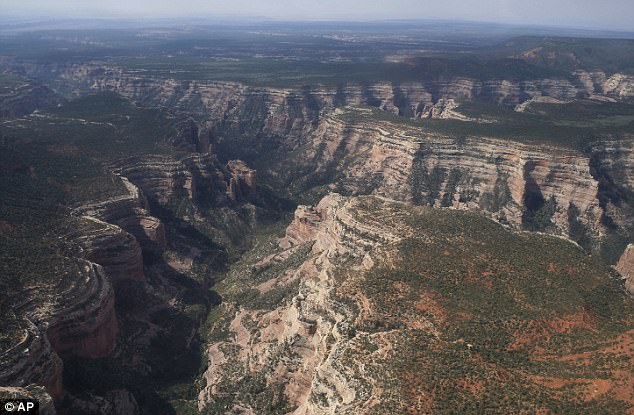 It was later revealed that Trump agreed during the meeting to shrink a national monument in Utah that Barack Obama established just before he left office at Zinke’s recommendation.

‘He will be going to Utah in the first part of early December and we will release more details at that point,’ Huckabee Sanders said.

‘We believe in the importance of protecting these sacred antiquities, but Secretary Zinke and the Trump administration rolled up their sleeves to dig in, talk to locals, talk to local tribes, and find a better way to do it,’ Hatch said.

‘But as we understand, there’s an ongoing audit and we’ll look forward to seeing the results of that later. …