The only option to remove a giant rotting whale carcass that is attracting scores of sharks to a popular beach may be to tow it out to sea and sink it, a marine expert has said.

Authorities are so far stumped as to how to remove the 20m body of a whale, estimated to weigh up to 40 tonnes from Wattamolla beach, south of Sydney.

They have warned swimmers to stay out of the water as scores of hungry sharks have been attracted to the carcass which is wallowing in the shallows.

Authorities are so far stumped as to how to remove the 20m body of a whale, estimated to weigh up to 40 tonnes from Wattamolla beach, south of Sydney

The sharks have been eating the mammal’s carcass as it floated in a remote inlet located in the Royal National Park, before washing up on Wattamolla beach, more than 15 kilometres by car or boat from the nearest town.

University of Wollongong marine biology professor Andy Davis said the body was most likely an endangered Sei whale, the third largest species in the world, and that it may have to be towed out to sea and sunk.

‘The first is to drag it on shore, dig a big pit and bury it. But it’s a rocky coast so that is virtually out of the question. I think the only option is to drag it offshore and sink it.’

A spokesperson for the NSW Office of Environment and Heritage which manages the Royal National Park warned people to stay out of the water. 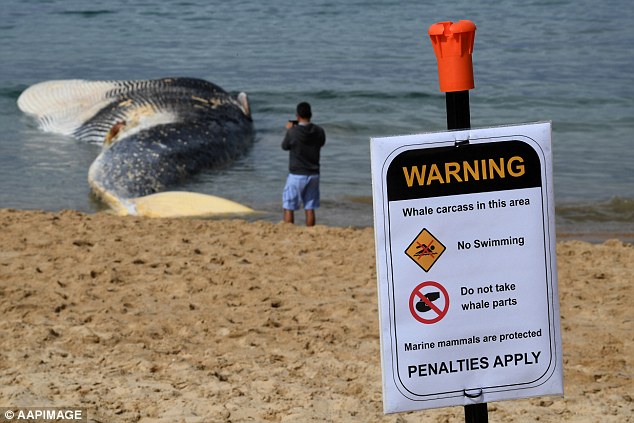 ‘No activities will be undertaken today,’ the spokesperson said.

‘National Parks and Wildlife Service is still considering options, which include towing the carcass out the sea.’

The whale carcass first became lodged on rocks near Wattamolla Beach a week ago before it was washed onto the sand overnight.

Its size and the beach’s location inside the vast Royal National Park mean options for disposal are limited, a spokesperson said.

Authorities are yet to confirm the species of the whale but have ruled out it being a humpback.

Two Sydney bothers filmed themselves swimming near the carcass on the weekend even though sharks were nearby to feast on the dead mammal.