Whale comes crashing down on a boat in Monterey Harbor, California

A ‘vengeful’ whale has given a group of watchers an almighty fright after crashing down on the front of their boat – scraping off barnacles and damaging the vessel in the process.

The terrifying encounter took place earlier this month and saw a whale likened to Moby Dick make a number of nerve-wracking passes at the boat.

The almost deadly trip was captured on video by Elena Sera Jose who is heard urging her shipmate to ‘back out a little bit’.

The whale (pictured) rears its head before crashing down on the vessel, Flying Fox. Elena Sera Jose had been sailing off the coast of Monterey Harbor in California with her boyfriend Ryan Nelson when the terrifying encounter took place 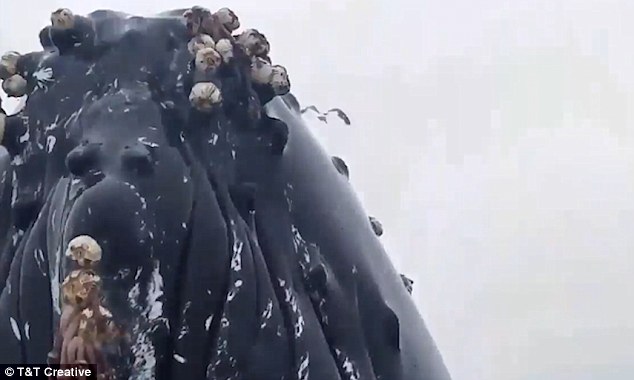 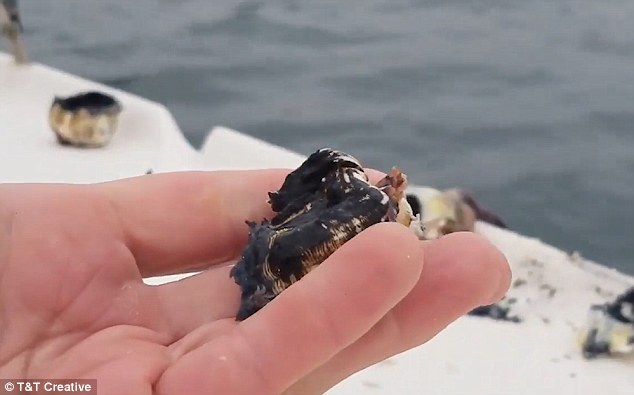 Some of the barnacles that were left on the deck. Small pools of blood can also be seen in the video footage following the shocking whale encounter

The opening stages of the video show a number of seals jumping out of the water – a very peaceful scene.

Soon after this, however, a gigantic whale breaches the water directly next to the group’s boat.

She can be heard asking her boyfriend Ryan Nelson to get them out of the area after the close call.

The pair had been sailing off the coast of Monterey Harbor in California, in their 26ft Clipper Marin Sail boat when they spotted a group of seals and birds feeding on anchovies.

And before long, they were joined by humpback whales also keen to get some of the spoils. Without realizing, their boat quickly ended up in the middle of the feeding frenzy.

She’s now nervous following the whale encounter and can be heard saying: ‘That gave me palpitations’. 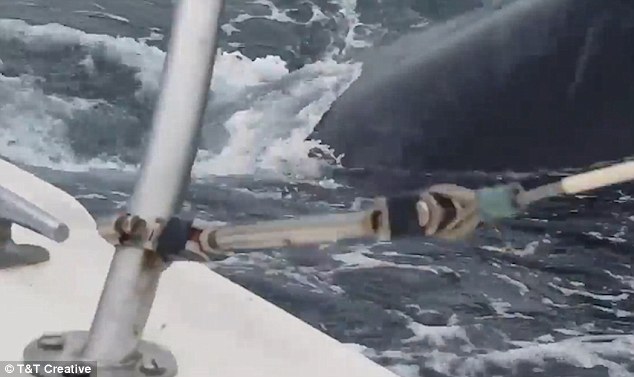 Prior to the most frightening incident, the whale had been spotted making a number of passes at the boat 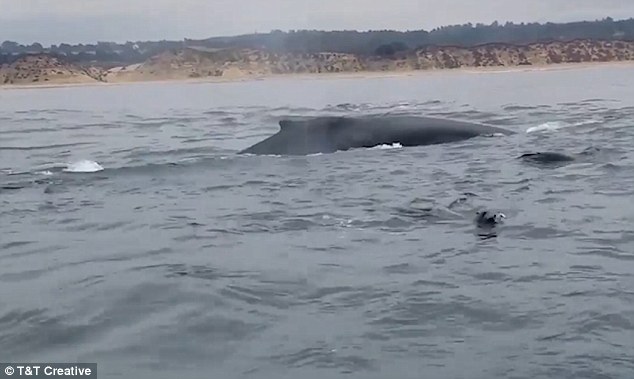 Elena Sera Jose and her boyfriend had spotted a group of seals and birds feeding on anchovies so stopped to take a look. Seconds later, however, a whale (pictured) reared its head 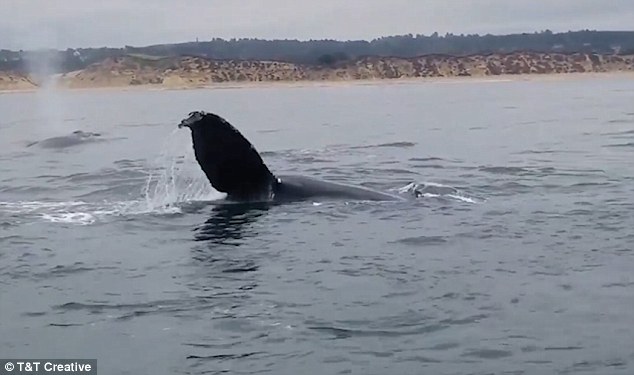 The whale sticks lifts one of its fins as it breaks the water. Just moments later the same whale would subject Elena Sera Jose and her boyfriend to a terrifying ordeal 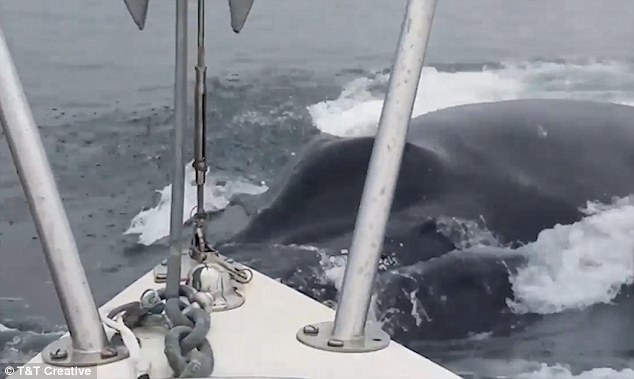 The whale, which has been likened to Moby Dick, makes a very close pass at the duo’s vessel before disappearing under the water again

Likening the giant mammal to Moby Dick, she says: ‘I saw his eye…that was insane, he did not care.’

She also notes how ‘vengeful’ the animal seems.

Just seconds after this however, the whale comes crashing out of the water and lands with a heavy thud at the front of the boat.

It terrifies Ms Sera Jose and her boyfriend who can both be heard screaming in the footage.

Videoing the aftermath of the encounter, she picks up barnacles from the deck which have scraped off the whale.

Small pools of blood can also be seen on the surface of the boat.

Now concerned for her wellbeing she exclaims: ‘We need to leave. Oh my god did you see what he just did.’

Her companion then notes that the boat has been damaged in the encounter and says: ‘We almost got killed by a whale’.

The video stops shortly after. 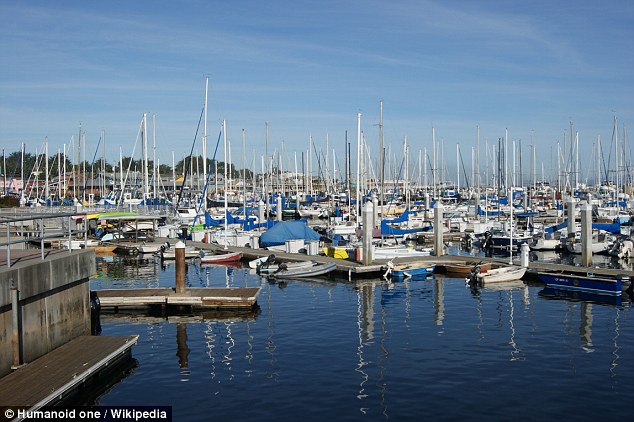 Elena Sera Jose and her boyfriend had been sailing off the coast of Monterey Harbor (pictured) in California, in their 26ft Clipper Marin Sail boat

Recalling the incident Ms Sera Jose said: ‘I was in the hatch taking pictures and videos of the humpback whales, seals and birds feeding on anchovies that morning. It really was a sight to see.

‘There were at least three whale watching boats in the same area plus other smaller vessels watching whales.

‘Then, all of sudden, we found ourselves in the middle of feeding frenzy surrounded by at least four whales and many seals.

‘We were in awe of it all and a whale came in under our boat then made a circle. “But suddenly he came under and breached almost on top of us, right where I was in the hatch.

‘I had my video recording the whole thing.

‘The barnacles off the whale’s belly got scraped on our deck and the weight of the whale breaching scratched our boat and bent one of the stanchions.’

Ms Sera Jose took to Facebook soon after the encounter to share the footage with the world.

She said: ‘We were watching whales, sea lions and birds anchovie feeding frenzy for two hours when a ravenous pack of whales surrounded our vessel, Flying Fox.

‘Before we knew it one of the giants breached our boat scratching off barnacles off his or her belly and leaving us a souvenir.

‘As we sat there stunned the beast continued to feast on anchovies like nothing happened.’

Monterey is famous for its whales and dolphins. Every year thousands take to the water to get a glimpse of the impressive creatures.