‘What a cop out!’ Jeremy Corbyn’s Brexit neutrality is ridiculed in election debate

The shadow business secretary said it was right Mr Corbyn adopted a neutral position while a second Brexit referendum was held in the event he becomes prime minister.

But her remarks prompted exasperated groans from the other politicians, and even prompted host Nick Robinson to quip: ‘It’s usually the Queen who takes a neutral position, not the prime minister.’

The BBC presenter, who was chairing the seven-way showdown from Cardiff, then asked Ms Long-Bailey if she could think of a single issue in Mr Corbyn’s parliamentary career where he had not taken a decisive stance.

The Labour frontbencher replied: ‘Not off the top of my head no.’

Labour’s Brexit position is to negotiate a new withdrawal deal with the EU which ‘protects workers’ rights’, and then put it on the ballot paper in a public vote alongside a Remain option.

Although senior Labour figures have suggested they would campaign to Remain in such a referendum, Mr Corbyn would not come down on either side, claiming doing so would weaken his hand in EU negotiations.

Back-and-forths over Brexit saw the most fiery exchanges in the debate which was otherwise marked by its noticeable absences – Boris Johnson, Mr Corbyn and Nigel Farage each refused to take part and instead sent representatives.

The terror attack on London Bridge cast a large shadow over the debate, with Robinson’s and each of the politicians’ opening remarks referencing the bloodshed and paying tribute to the casualties, public and emergency services.

Mr Johnson has imposed a blanket ban on appearing on stage with Ms Sturgeon because she is not a parliamentary candidate and therefore cannot become prime minister.

Chief Secretary to the Treasury Rishi Sunak has said the allegation that the Tories are planning to sell the NHS is ‘a desperate, conspiracy theory’.

Pressed on whether saying someone could potentially receive a five-figure bill for cancer treatment in the future, something a Labour Party email has allegedly said, is an untruth, Ms Long-Bailey said: ‘Certainly, if we privatise our NHS that could be the direction of travel and that’s why it’s so important to make sure our NHS isn’t on the table in any future US trade deal.’

Mr Sunak responded: ‘That’s totally and utterly ridiculous – we are deeply committed to an NHS free at the point of use as it always has been.’

Instead, chief secretary to the treasury Rishi Sunak – seen as a rising star within the party – represented the Conservatives.

The Prime Minister’s swerving of the seven-way showdown sparked Mr Corbyn, who was scheduled to take part, to send his shadow business secretary and close ally Ms Long-Bailey as a surrogate.

As well as becoming unstuck over its muddled Brexit policy, Labour was also accused of planning to hike taxes for ‘millions of married couples’ to fund Mr Corbyn’s eye-watering spending splurge would be found.

Mr Sunak clashed with Ms Long-Bailey as both traded attacks on the other’s manifesto.

He tore into Labour for misleading the electorate by claiming only the richest would be hit by tax rises.

Mr Sunak said: ‘Labour aren’t being straight with you, they’ve been told ‘you can’t pretend you can fund all these spending plans by taxes on rich people and companies, it’s simply not possible’. 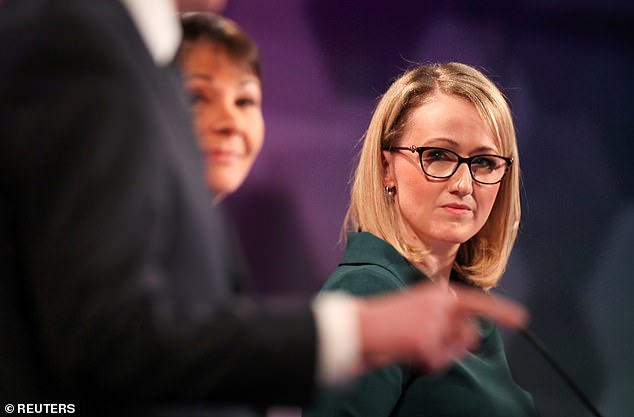 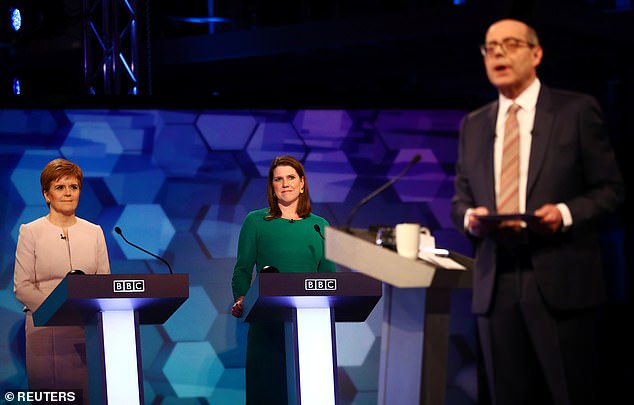 But her remarks prompted exasperated groans from the other speakers, and even hosted Nick Robinson joked: ‘It’s usually the Queen who takes a neutral position, not the prime minister’

Mr Sunak said that the last Labour government brought the UK economy ‘to the brink’, and savaged Mr Corbyn’s eye-watering manifesto commitments for rinsing the pockets of ‘ordinary working families’.

But Ms Long-Bailey accused the Tory of hypocrisy and made a dig at Chancellor Sajid Javid, implying he was to partially to blame for the 2008 financial crisis as he was then a Deutsche Bank executive.

What would the party leaders say to Donald Trump?

Asked what they would say to US President Donald Trump if they had 30 seconds with him, Ms Sturgeon said: ‘Please stand down.’

Ms Long-Bailey said: ‘I’m a good Catholic so I won’t say in public what I probably would say to him, but the most important point I’d make is about the climate emergency and how he needs to change his position.’

Mr Tice said ‘let’s get a quick trade deal done’ before he accused Ms Sturgeon of ‘lying to the British people’, to which she replied: ‘I think you’ve got form on that.’

Mr Price said his words to Mr Trump would be ‘resign, and take Boris with you’.

She further rubbished the Conservatives’ claim that Labour policies would rack up £1.2trillion in costings, dismissing it as fiction.

The debate kicked off with a question from a retired police officer who asked, in light of today’s terror attack, what the parties would do to shore up the UK’s security.

Ms Long-Bailey used the question to tear into the police cuts under the Conservative governments, vowing Labour would invest in the emergency and security services.

After each politician paid their tributes to today’s awful events, they set out their stalls ahead of the Christmas ballot.

Treasury minister Rishi Sunak said ‘we all want to move on’, adding: ‘We have a new Brexit deal ready to go, we’ll bring it back to Parliament before Christmas and leave by the end of January – and then we can get back to focusing on your priorities.’

SNP leader Nicola Sturgeon, in her opening statement, said: ‘The SNP wants Scotland to be an independent, outward-looking, internationalist country and we want the people of Scotland to have the right to make that choice.

‘But we also want to play our part in locking Boris Johnson out of Downing Street.’

Richard Tice, Brexit Party chairman, said: ‘Just imagine, with Brexit done properly we have an amazing future – and that’s why I am here.’

Polling company Savanta Comres selected the audience to reflect the wider electorate and ensuring a broad church of views were represented.