A fascinating new video has shown what it looks like from a self-driving Tesla sedan’s point of view as it navigates a winding road.

The footage is filmed with a 360 degree camera, giving viewers an immersive look at what the car ‘sees’ from all angles.

YouTube user Pranav Kodali created the clips by sourcing data from the Tesla’s Autopilot feature and converting it into a 360 degree video.

Press play and move your mouse to change the view

It’s unclear what model the Tesla is, but Kodali said it was running Autopilot 2.5 – the latest version of the firm’s proprietary self-driving computers.

As each car passes by, the Autopilot computer registers information about it, like its speed, whether it is stationary or oncoming, as well as its position relative to the computer 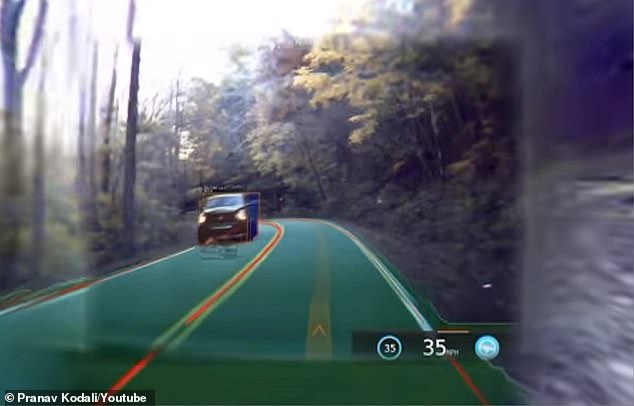 It’s unclear what model the Tesla is, but it’s running Autopilot 2.5 – the latest version of the firm’s proprietary self-driving computers, which is more powerful than Autopilot 2.0

WILL TESLA EVER RELEASE A CAR THAT CAN DRIVE ITSELF ACROSS THE COUNTRY?

Billionaire tech mogul Elon Musk has claimed that a Tesla will soon be able to drive itself cross country.

In 2016, Musk said that a Tesla would be able to drive itself from Los Angeles to New York.

Year after year, he has has failed to deliver on that promise.

Last August, Musk insinuated that the cross-country trip wouldn’t be happening until 2018.

‘It is certainly possible that I will have egg on my face on that front, but if it’s not at the end of the year, it will be very close,’ Musk said in a call with investors last year.

Tesla has been inching closer to releasing a fully autonomous car.

Its self-driving software, Autopilot, hasn’t been without speed bumps, however.

Tesla’s Autopilot feature works using an array of cameras, radar, sonar and other sensors spread across the front, back and sides of the vehicle.

Readings from these sensors are fed into an AI that constantly calculates whether the car should stop or steer around objects, adjusting the vehicle’s path accordingly.

Throughout the 17-minute video, the Tesla is driven down the winding and twisting roads of the Tail of Dragon course.

The Tail of Dragon course, located in North Carolina, is one of the most popular roads for motorcycles and sports cars, featuring no intersecting roads or driveways.

‘A visualization of the data eight Autopilot cameras see when driving on the famous Tail of Dragon course,’ Kodali explained.

‘Data for visualization was taken directly from an Autopilot 2.5 car. Pan around for a full immersive experience.’

As each car passes by, the Autopilot computer registers information about it, like its speed, whether it is stationary or oncoming, as well as its position relative to the computer.

Kodali said he pieced together the footage using clips from another video showing a Tesla running Autopilot.

In that video, the YouTube user explains that the car wasn’t using Autopilot the entire time, as it veered over the line separating the two lanes.

The driver chose to use an abundance of caution and resume manual driving capabilities.

‘To save you the trouble, I stopped trying to engage [Autopilot] at about 3:30 in the drive because it was just waaay too dangerous,’ YouTube user greentheonly wrote. 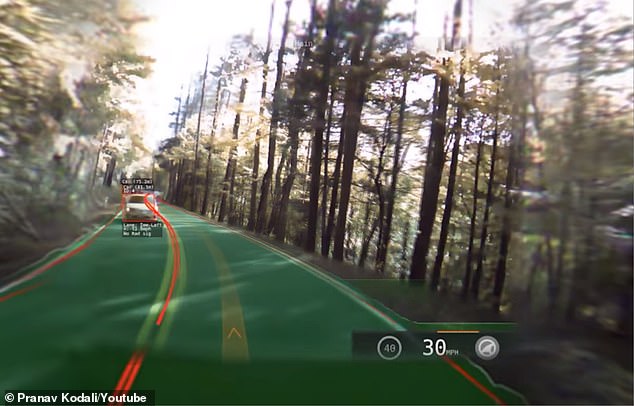 Tesla’s self-driving Autopilot computer works using an array of cameras, radar, sonar and other sensors spread across the front, back and sides of the vehicle 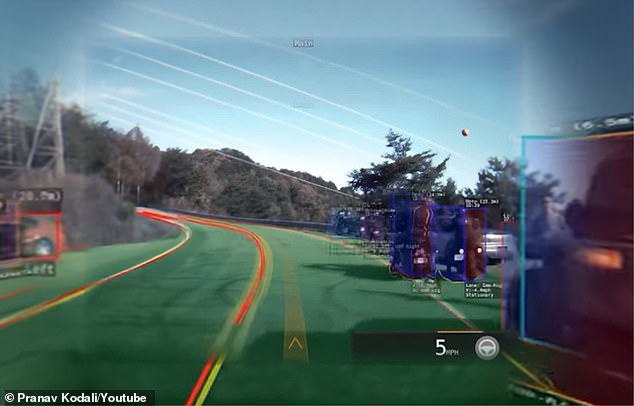 Kodali said he pieced together the footage using clips from another video showing a Tesla running Autopilot. The user explained that they turned off Autopilot about 3 minutes and 30 seconds into the video, as the car veered too far into the oncoming traffic lane

Tesla’s Autopilot feature hasn’t been without its flaws.

In June, federal investigators determined that a Tesla SUV using the firm’s autonomous driving system accelerated before it collided with a California freeway divider in March.

The crash on the US 101 killed the driver, Walter Huang, 38, an Apple software engineer.

The Tesla Model X had been operating using the firm’s Autopilot software when it collided with a freeway barrier in Silicon Valley.

Data showed the Model X SUV did not brake or try to steer around the barrier in the three seconds before the crash. Huang did not have his hands on the wheel.