What a tool! Man drives car using a MONKEY WRENCH

This is the incredible moment a motorist decided his lack of a steering wheel wouldn’t stop him driving a car.

When confronted with a vehicle that doesn’t have the fairly vital component that would usually turn its wheels, most would shy away from roads until the problem was fixed.

But this driver decided to bypass that process entirely, attaching a monkey wrench directly onto the steering column.

Incredible footage shows how he clamps the tool to what used to be the wheel’s centre, before casually turning it to negotiate busy roads.

He easily passes through traffic at the unknown location, manipulating the column with one hand. 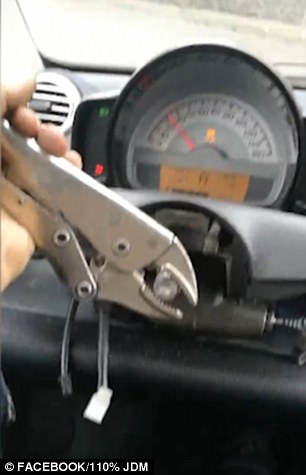 In the absence of a steering wheel, the motorist attaches a monkey wrench to the steering column to drive the vehicle

The driver uses his free hand to showcase his skill as he films the trick for social media users.

It has already had 1.6million views since it was uploaded to the 110% JDM car enthusiast group on Facebook about a week ago.

The page joked that the driver was improvising while rushing round to a girl’s house after being told her parents are away, writing above the video: ‘Her: wanna hang out? Him: my car isn’t finished. Her: my parents aren’t home.’