What are the best value remedies for common skin complaints?

There’s a cream, ointment or gel for everything — from insect stings, eczema and summer skin infections triggered by sweating, to perennial complaints such as mouth ulcers and conjunctivitis.

The beauty of them is that they get to work immediately where needed, ‘and since they don’t pass through the digestive system and liver — like oral tablets and liquids do — they cause fewer side-effects’, explains Dr Faheem Latheef, a consultant dermatologist at Leeds NHS Hospitals Trust.

But with a variety on offer and prices varying hugely, how do you know what to pick?

We asked experts for their recommendations on the best value over-the-counter remedies for common skin complaints.

‘Many people with eczema struggle to find an emollient that moisturises their skin sufficiently to help with itching and soreness,’ says Dr Latheef, as most over-the-counter remedies are not formulated to deal with these conditions.

‘Dermatologists instead recommend ointments [which have a Vaseline-like consistency] as creams contain water and need preservatives to prevent the water from “going off”, but these added extras can sometimes irritate the skin.

‘Ointments, on the other hand, are oil-based and do not contain water so don’t need these preservatives, but tend to be greasier and more suited to use on the arms, legs and torso than the face.

‘Hydromol ointment is good value and effective against very dry skin conditions such as eczema or psoriasis.’

‘In recent studies [sponsored by the maker], this proved highly effective at increasing skin hydration for at least 24 hours after a single application.

‘It contains three ceramides [fat molecules that form a key part of the skin barrier], and deploys multi-vesicular emulsion, a slow-release technology developed by the manufacturer that gradually releases the moisturising ingredients over 24 hours rather than all in one go as with conventional creams. It’s also fragrance-free, so less likely to irritate sensitive skin, and is non-comedogenic [won’t clog pores].’

‘Chloramphenicol is an antibiotic that kills bacteria responsible for eye infections like conjunctivitis,’ says Sultan Dajani, a pharmacist in Hampshire.

‘Use the ointment version rather than the eye drops because drops can be diluted by watery eyes, making them less effective. The ointment won’t dilute in the same way, but it will make your vision blurry for a short while.

‘It’s also good for clearing up styes and doesn’t need to be stored in the fridge as eye drops do as the active ingredient remains stable at room temperature.

‘Opt for a pharmacy own brand — such as Numark — rather than a branded version, as it’s the same but costs £3 compared to £5.99 for Optrex Infected Eye Ointment, for instance.

‘Use three to four times a day, reducing as your symptoms ease. You can buy it over-the-counter for adults and children aged two and over but will need a prescription for children under two.’ 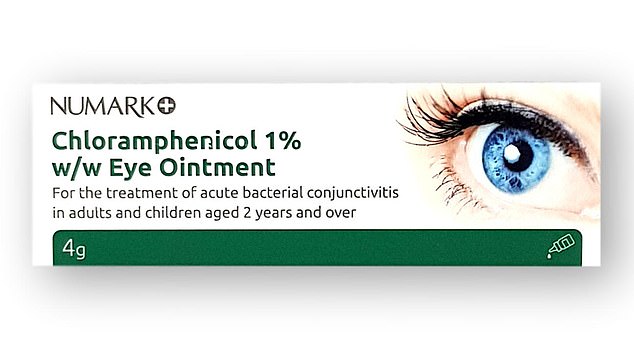 ‘The best over-the-counter products for mild acne are those containing 5 per cent benzoyl peroxide, such as Acnecide,’ says Dr Latheef. ‘Benzoyl peroxide kills bacteria that contribute to acne; it also removes excess oil and dead cells in clogged pores that the bacteria feed off.

‘And if you’re taking certain antibiotics for acne (such as lymecycline, prescribed for moderate to severe acne) using a gel containing benzoyl peroxide in addition to these drugs, means more bacteria are destroyed, reducing the chances of antibiotic resistance.’ 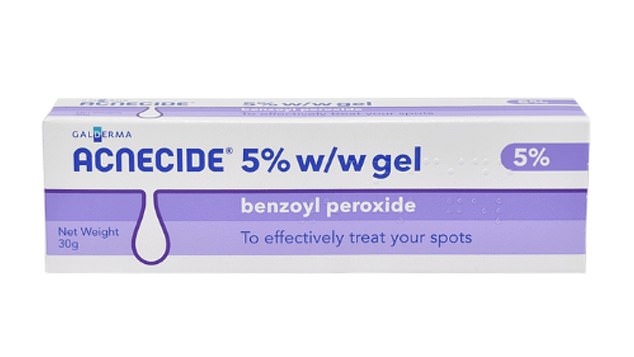 ‘I often recommend this gel to patients,’ says Tim Allardyce, a physiotherapist at Surrey Physio.

‘It contains 5 per cent ibuprofen — an anti-inflammatory. Ibuprofen tablets are not suitable for everyone — particularly those with stomach ulcers [it irritates the stomach lining] or asthma [it can worsen symptoms]. And although you get a slightly lower dose in a gel, as it has to penetrate the skin, at least you can rub it on where you need it and it doesn’t need to be digested.

‘There is also a maximum strength 10 per cent version but start with the lower strength. You may not need the higher dose, although there’s virtually no chance of side-effects with a gel of either strength.’ 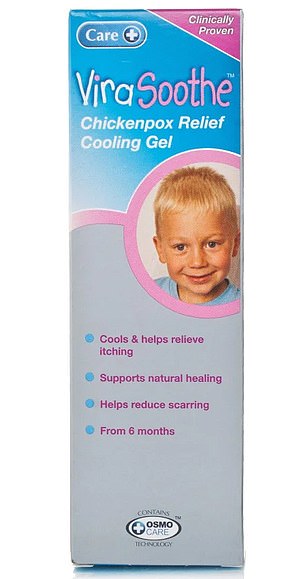 ‘This is much better for treating chicken pox than the better-known calamine lotion,’ says Sultan Dajani.

‘Calamine lotion dries on the skin, causing itching and scratching which can lead to scarring. It also leaves a messy, chalky residue and needs to be reapplied several times a day.

‘But Virasoothe is much more soothing as it contains glycerine, carbomer and sodium hydroxide — ingredients that draw moisture to the surface of the skin.

‘This soothing effect means less scratching [and potential scarring]. And the effects last for up to eight hours.’

‘Cracked heels can deepen into fissures if left untreated and are potentially a site for micro-organisms to enter the body,’ says Dr Latheef.

‘Untreated, this can then cause skin infections such as cellulitis [a bacterial infection in the deeper layers of the skin], athlete’s foot due to fungus, and warts or verrucae due to viruses.

‘The infection risk is higher if you have diabetes because the immune system is weaker and there is often poor blood circulation to the feet.

‘As a lack of moisture in the skin around the area is one of the most common reasons for cracked heels, using an effective moisturiser twice daily can help greatly.

‘Flexitol heel balm contains 25 per cent urea, which attracts moisture from the air, locking it the skin.’

‘Mouth ulcers can be caused by a weakened immune system, injury and grinding teeth at night, as well as certain bacteria and food sensitivities,’ says James Goolnik, a dentist at Bow Lane Dental Group in London.

‘They can appear inside the cheeks, on the lips, on the tongue and gums and, more rarely, on the roof of the mouth. Sometimes they form in painful clusters.

‘Iglu gel contains an anaesthetic, lidocaine hydrochloride, which numbs the area while the ulcer heals, plus aminoacridine hydrochloride, a disinfectant that kills bacteria responsible for it and paraffin wax, which forms a protective coating to stop food and bacteria getting in.

‘Try to avoid eating with the gel on. It lasts around an hour and can be reapplied as needed. Iglu can be bought over-the-counter for anyone over the age of seven, but seek medical or dental advice for any ulcer that doesn’t heal within ten days.’ 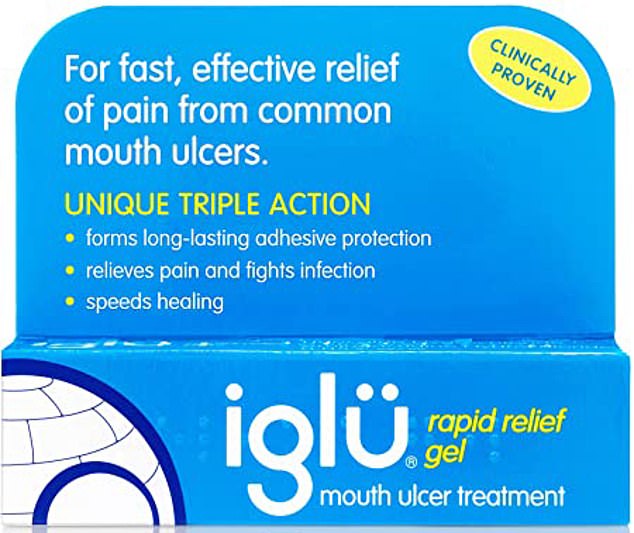 ‘If you get a localised sting or allergic reaction to a bite then the best bet is to rub an antihistamine cream, such as Anthisan, on the affected area,’ says Sultan Dajani.

‘It works immediately and contains an antihistamine called mepyramine maleate. Histamine is a chemical produced by the body and stored in cells called mast cells in almost all tissues of the body. When the body reacts to a foreign substance, such as a sting, the mast cells break down, releasing their stores of histamine — these produce the symptoms of an allergic reaction, including inflammation, redness and itching of the skin.

‘Mepyramine stabilises the mast cells, preventing them from breaking down. Antihistamine tablets aren’t very helpful if you’ve just been stung as they take two or three days to take effect.’

‘This is effective in treating fungal skin infections including athlete’s foot, fungal nappy rash and infections of the groin, armpit or folds of skin,’ says Sultan Dajani.

‘The active ingredient, clotrimazole, kills the fungal infection, easing the itching. Use for five days afterwards to prevent any remaining spores from germinating.

‘Save money by buying a pharmacy own brand such as this one — instead of a better-known name such as Canesten, which costs around £3.49.’ 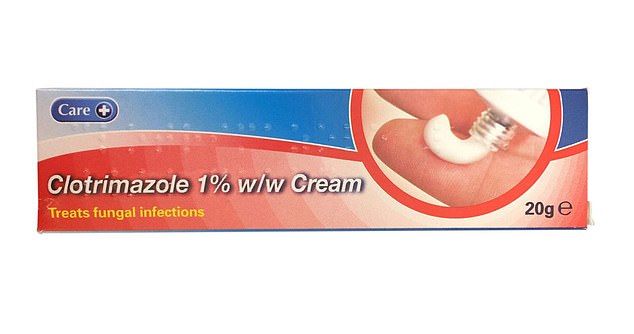 A new tool the size of a credit card has been developed to help remotely monitor mental health patients for cardiac problems caused by anti- psychotic medication.

Developed by AliveCor KardiaMobile, the device is a portable electrocardiogram (ECG) — it allows healthcare professionals to take accurate readings of a patient’s heart rate without them needing to go to a hospital. The assessment, which can be done in their home, is also less intrusive and saves time.

The results are sent to the clinical team via Bluetooth to a mobile phone or tablet — the readings can then be analysed to decide whether a patient’s treatment needs to be changed. The device is currently being used in Yorkshire and the North East, reducing heart check delays.