What are the risks of IPOs to private investors?

London has had one of the strongest periods for Initial Public Offerings in years, with high-profile tech startups opting to list in the City with sky-high valuations.

While the likes of Deliveroo, Darktrace and Dr Martens have all made their market debuts, ordinary investors still remain largely shut out of the booming IPO market.

First day success:  Dr Martens shares were not available to investors ahead of trading

In its analysis of 258 IPOs between January 2016 and May 2021, it found there is a ‘structural bias’ in the current system that puts retail investors at a disadvantage.

Deal underwriters tend to market large pre-IPO purchases with institutional investors before floatations. This makes it impossible for everyday investors to buy shares at the issue price, only after they begin trading.

Stockopedia research reveals 89 per cent of IPOs open higher than their issue price, and the average ‘pop’ to the price on the first day of trading is nearly 10 per cent.

Deliveroo, which was offered to ordinary investors at float, is a cautionary tale. It has been widely touted as a flop after its share price plunged more than 30 per cent on its debut.

‘Our research shows that focusing on better quality, reasonably valued IPOs may have a significant bearing on performance.’

Richard Wilson, chief executive of Interactive Investor, said: ‘There’s not much fairness when it comes to IPOs – it’s rare that the general public are offered the opportunity to get involved.

‘The City institutions have tended to receive preferential treatment, leaving the rest of us to pay significantly more for the stock once the company floats.

‘With 89 per cent of IPOs opening higher than their issue price, according to Stockopedia, it effectively amounts to daylight robbery.’ 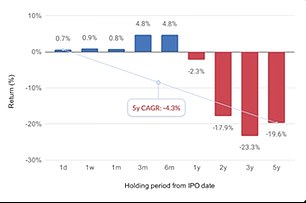 The Stockopedia research also suggests that while investors have a decent chance of success in picking a winner in the short-term, there is a higher chance of underperformance if they hold on for too long.

The three to six month timeframe appears to be the sweet spot for holding IPOs but any longer and they tend to perform poorly.

By contrast small caps, which are often under-researched, have largely outperformed mid and large caps on almost all metrics.

Over the past five years, the average performance of small cap IPOs was 85 per cent, compared to large caps with a negative performance of -20 per cent one to two years after listing.

A survey of 1,200 private investors with Interactive Investor found a third preferred to buy IPOs for their long-term growth potential, with a further 23 per cent looking to invest in the medium term before selling their shares.

That means DIY investors could be putting their capital at risk given the Stockopedia research found that the longer an investor holds an IPO the more likely it is to underperform.

But companies that float vary widely, so there is no general rule and investors should do their own homework on individual firms and their future prospects before deciding the right time to sell.

Nevertheless, Richard Wilson of Interactive Investor said the research did suggest that the best time to be involved in the typical IPO stock was before it begins trading on the stock market. 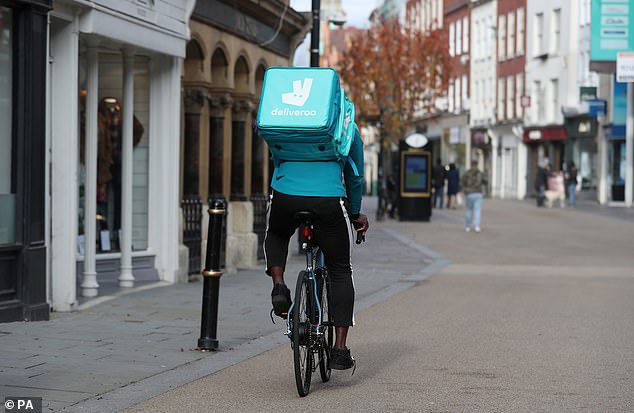 ‘Of course, the professional investors will argue that they put significant sums of money at stake, and that opening IPOs to a wider audience could have negative consequences for the float,’ he said.

‘However, the current process is clearly unfair and puts the retail investor at a clear disadvantage.

‘Companies, their brokers and well-paid advisers should do the right thing and level the playing field.

‘There’s talk of change, but talk is cheap – we won’t stop campaigning on this issue until we see change.’

The deluge of IPOs is not set to slow, with Thai restaurant chain Giggling Squid reportedly mulling a float in London. Other firms tipped to look at listing this autumn include online garden centre firm YouGarden and Marley, a roofing supplies firm.