What are they doing there? Moment a passing train narrowly misses a car PARKED on the tracks

A motorist is counting their lucky stars after a near miss with a passing train when they stopped on the railway tracks in Melbourne’s west.

Melbourne radio station 3AW was sent horrifying footage of the near miss involving a 4WD on the tracks at the Cherry Street railway crossing in Werribee on Monday morning.

A woman who was a back seat passenger in a car died at the same crossing in similar circumstances in 2012.

The 4WD made it onto the tracks at the Cherry Street railway crossing in Werribee before the boom gates closed, giving the driver plenty of time to make it to the other side The 4WD was involved in a near miss with a passing train after it stopped on the tracks. ‘It would’ve missed the train by much,’ Bruno told Melbourne radio station 3AW

The startling video shows the vehicle made it onto the tracks before the boom gates closed, giving the driver plenty of time to make it to the other side before the train approached.

Instead, the 4WD driver stops and decides to wait as their vehicle comes agonisingly close to the passing train as it comes rushing past.

Listener Bruno told 3AW breakfast presenter Neil Mitchell the driver could have driven across but stopped for no reason.

‘The driver turned left and the boom starts to come down,’ Bruno told the station.

‘Whoever the driver is continues to goes through so you think to yourself they’re going to clear the railway when in actual fact, as they go past the boom, they stop on the tracks.

Bruno said it would have been a close call for the motorist.

‘It wouldn’t have missed the train by much,’ he told the radio station.

The shocking video sparked a reaction on social media. 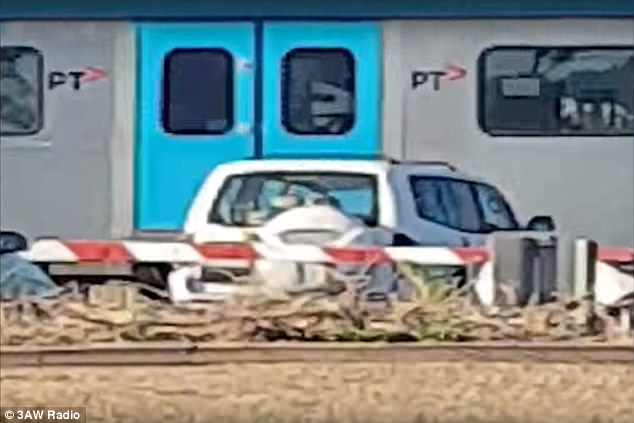 ‘Looks like from the video the train did not sound the horn at all. Did not slow down, I know it is not going to stop but could have slowed down, and the car driver must be an idiot for going through the crossing when the siren and light were on indicating that a train is coming…… very lucky escape,’ one woman posted on 3AW’s Facebook page.

Another added: ‘This was the scene of a fatality in 2012. Wyndham City needs action from the state and federal governments not just talk and spin!’ 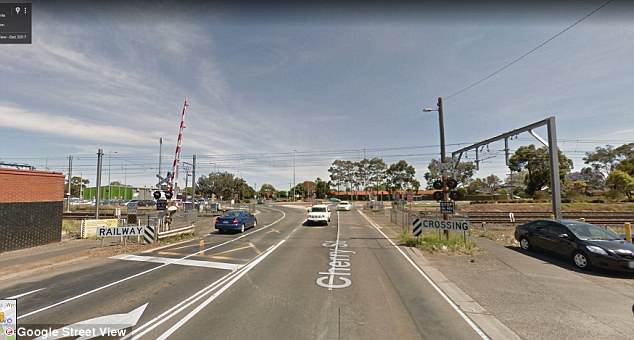