What became of girls who frolicked with Bullingdon boys? Oxford’s brightest young women rose to top

They are the candid snapshots of a gilded lost age – previously unseen images of Boris Johnson’s contemporaries at Oxford University in the 1980s taken by society photographer Dafydd Jones.

While the men at the parties went on to achieve power in politics, wealth in the City or, in the case of Hugh Grant, fame in showbiz, the high-flying party girls of their day have just as intriguing stories to tell.

You’ll find them leading multinational fashion brands, practising psychic healing and working with Royalty. So what did happen to the glossy posse of remarkable young women? CLAUDIA JOSEPH has the answers…

The notorious Bullingdon Club – whose uber-rich members drunk themselves silly and then invariably trashed the venue – defined the hedonistic mindset of some upper-class Oxford students.

This photo, taken at a 1982 point-to-point event hosted by the club, shows Kate Murray-Philipson cavorting in a pile of straw with James Sainsbury – a descendant of the founder of the Sainsbury supermarket chain. Standing over them is another Champagne Charlie called Nick Straker – brandishing a half-drunk bottle of Taittinger.

Indeed, Kate went on to marry Nick and told the MoS last week how she particularly remembered him wearing his tails from the day before and looking ‘dishevelled’.

Since then, Nick has had a lucrative career in the Japanese equity market.

For her part, Kate – who studied at Oxford Polytechnic, now Oxford Brookes – was a friend of the now disgraced socialite Ghislaine Maxwell. Kate took an artistic route, working with her sister Cornelia as a specialist interior painter.

She and her husband and their three children (who are now in their 20s) divide their time between homes in London and Norfolk. 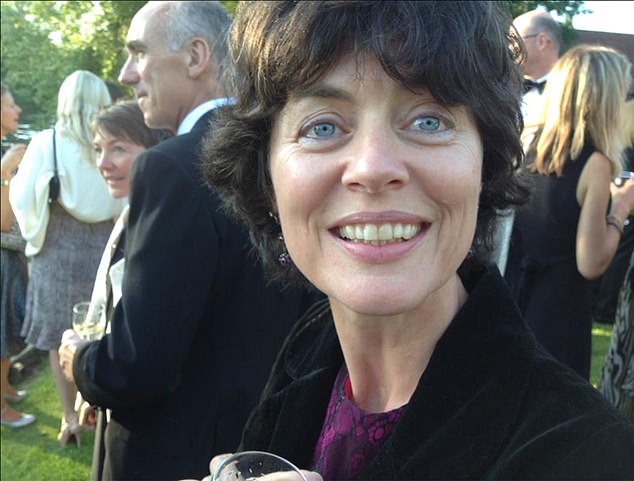 Kate is the granddaughter of old Etonian former Tory MP Hylton Murray-Philipson. Her brother Hylton is an old Etonian landowner and banker whom Prince Charles has described as one of his ‘heroes’ for his work planting 30,000 trees on his 1,000-acre estate in Leicestershire.

Recently, he spent five days in intensive care suffering coronavirus and recovered after the Prince sent him an email telling him to ‘keep fighting’.

Lying on a lawn in her ball-gown, the 29-year-old was the epitome of aristocratic languor as she took time out from dancing into the morning at the 1988 Magdalen Ball.

Not an Oxford student herself, she was a textiles graduate of the Camberwell School of Art who had returned to the city where she had done her A-levels.

Looking back now at the photo, she told the MoS: ‘It was the end of the party and I had lost my friends. I didn’t want to lie on the floor on my own. I thought it would be safer to lie next to someone because he was asleep.’ 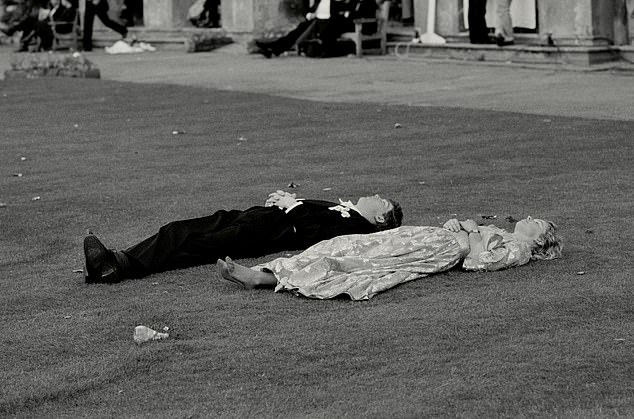 Previously she was a boarder at Lawnside School in Malvern – which the headmistress said ‘cared for the daughters of the officers and gentlemen who had to travel the world administering the Empire’ and which has now long closed.

Kitty has since carved out a very successful creative career as a society florist.

She did the flowers for Princess Beatrice’s 18th birthday party and the Queen’s nephew David Linley’s wedding as well as the grand display for the Royal Barge on the Thames during the Queen’s Diamond Jubilee. 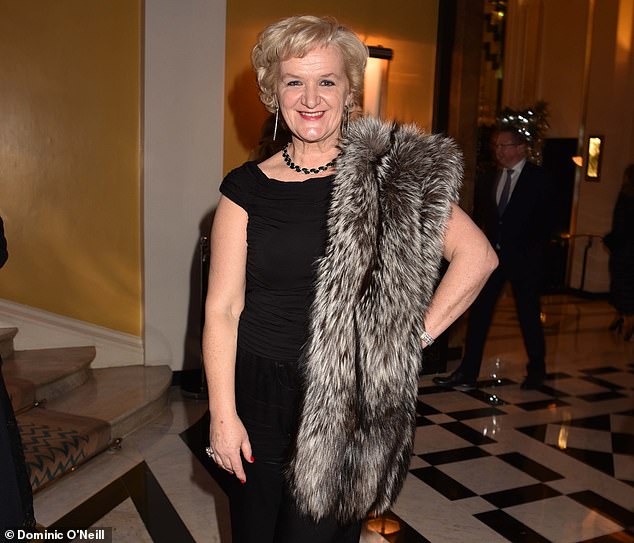 Together with her friend the Duchess of York, she designed a pin for the White Ribbon Alliance for Safe Motherhood — a coalition of charities promoting the healthcare of mothers and babies in developing countries.

In recent years, her brand has expanded to include luxury silk scarves, jigsaw puzzles, chocolate packaging and a colourful range of pet ‘dogerchiefs’. Unmarried, she describes herself as a ‘full-on creative’.

With her feather boa and a high kick, Jo wouldn’t have looked out of place in a 1920s scene from F Scott Fitzgerald’s novel The Great Gatsby. However, in the intervening 40 years, she has become a pillar of the Establishment. 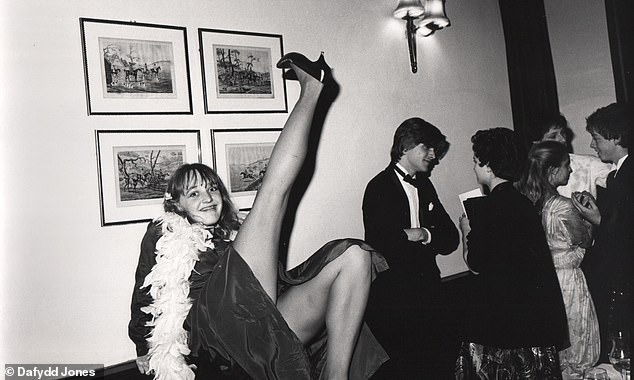 With her feather boa and a high kick, Jo Valentine (above) wouldn’t have looked out of place in a 1920s scene from F Scott Fitzgerald’s novel The Great Gatsby

Using her Maths and Philosophy degree from St Hugh’s College, Oxford, she went straight into corporate finance at Barings Bank. An impressive portfolio career has seen the 61-year-old work in industry, campaigning and regeneration.

Having been made a life peer as Baroness Valentine, her focus now is working for Business in the Community, seeking to improve some of Britain’s ‘forgotten’ towns.

Married to venture capitalist Simon Acland, son of Sir Antony Acland, former Head of the Diplomatic Service, she has two daughters in their late-20s. 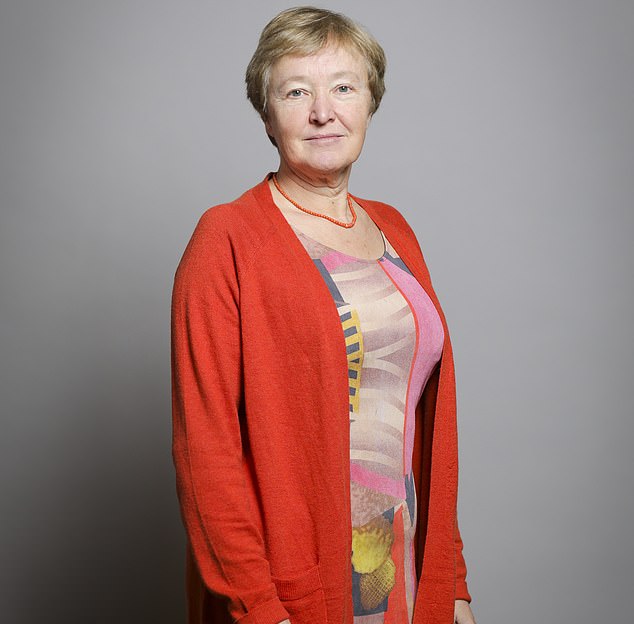 Jo Valentine (pictured) has been made a life peer as Baroness Valentine and focuses on working for Business in the Community, seeking to improve Britain’s ‘forgotten’ towns

Back in her high-kicking Oxford days in 1980, it was just another night partying – this time at a ‘Keats Dinner’ at Studley Priory, a mansion in the Oxfordshire countryside. Photographer Dafydd Jones recalls how he had finished taking pictures that night but returned after leaving behind his bag.

He says: ‘I found the party had become more raucous – with Jo doing that acrobatic thing with her legs.’

Resplendent in a cream silk flapper dress and a long string of pearls, Georgia is pictured searching for her coat at the 1984 Valentine Ball, a black tie affair at the Oxford Union debating society and then a key part of the social calendar for the university’s smart set. (Three years later, the ball was attended by a young David Cameron).

Today, Georgia, 58, remains at the heart of smart society. She became an intern at Harper’s & Queen magazine, then a book critic and is now a healer. 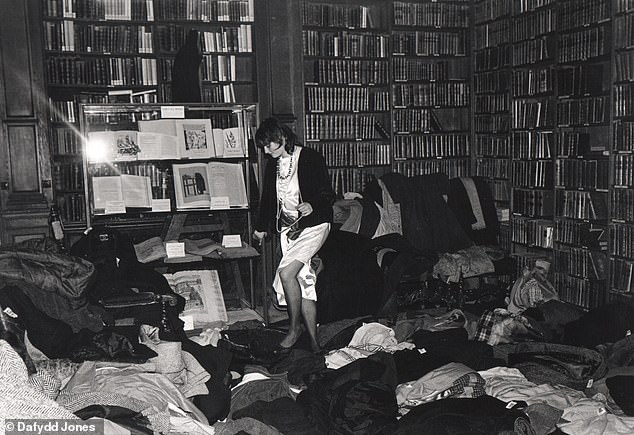 Georgia Metcalfe is pictured searching for her coat at the 1984 Valentine Ball, a black tie affair at the Oxford Union debating society. It was then a key part of the social calendar for the university’s smart set 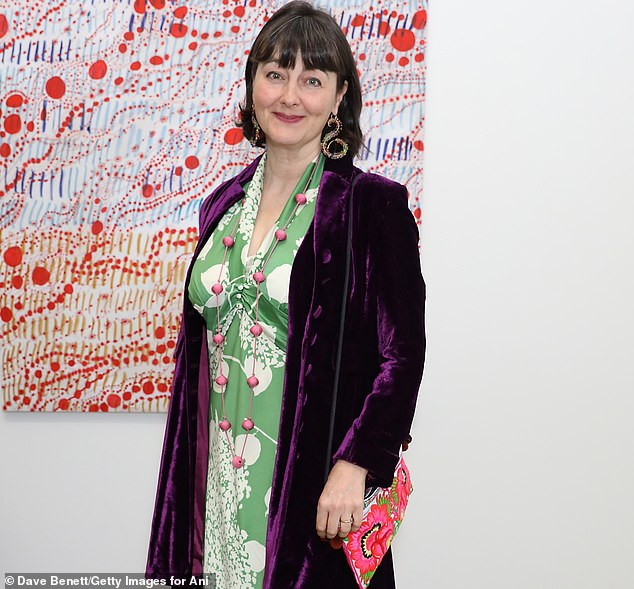 In 1989, she married Nicholas Coleridge, whose father was chairman of Lloyd’s of London. Nicholas went on to be chairman of publisher Conde Nast (with its stable of society magazines Vogue, Vanity Fair and Tatler) and chairman of the Victoria & Albert Museum Trustees.

A mother of four, Georgia qualified as a healer after studying at the College of Psychic Studies. Energy healing sessions with her cost £70 an hour and she describes her work as a ‘gentle, relaxing therapy’.

She’s also a volunteer at Chelsea’s Royal Hospital and her family divides their time between houses in Chelsea and Worcestershire.

Some of the most outrageous parties in Oxford in the early 1980s were held by the notoriously louche Piers Gaveston Society.

Named after a suspected gay lover of Edward II, guests were encouraged to wear grotesque and scanty costumes.

This typical photo from one of their semi-orgies was taken at the society’s 1983 Garden of Earthly Delights ball at London’s Park Lane Hotel. Hugh Grant enjoyed such revelries and can be seen here with Lulu Rivett-Carnac and Marina Killery. 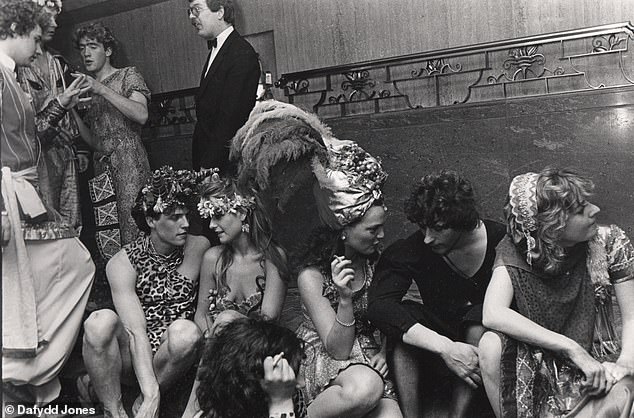 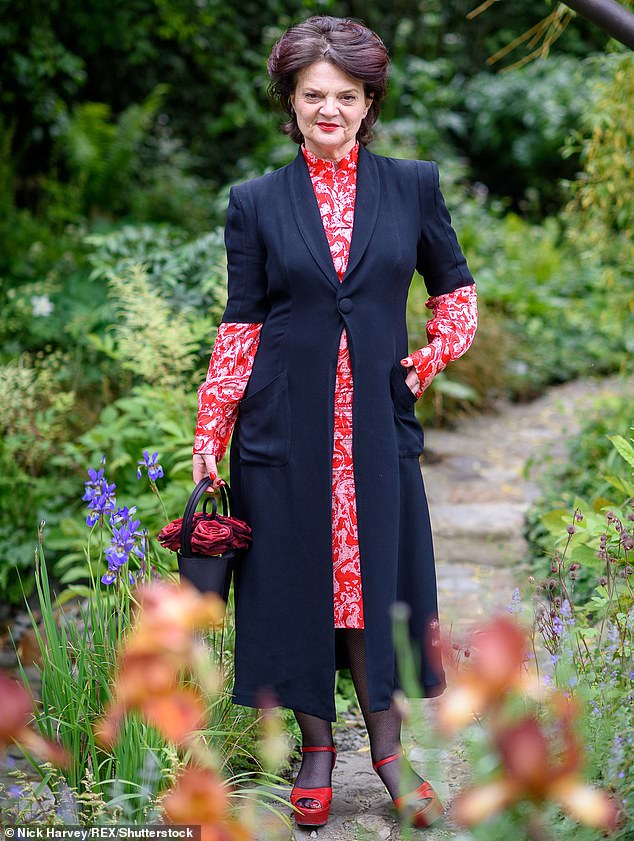 Lulu Guinness (above) is now better known as a bag designer, whose handbags and wallets have been carried by Madonna and Kate Moss

In animated conversation with the future actor is Marina – now a famous milliner who was a favourite of Princess Diana.

Lulu – who is talking to Scottish nobleman Lord Neidpath – is now better known as the bag designer Lulu Guinness (whose handbags and wallets have been carried by Madonna and Kate Moss) having married the Honourable Valentine Guinness, younger son of the 3rd Baron Moyne, in 1986.

Awarded an OBE in the 2006 Queen’s Birthday Honours List, Lulu had two daughters but she and her husband divorced in 2013. 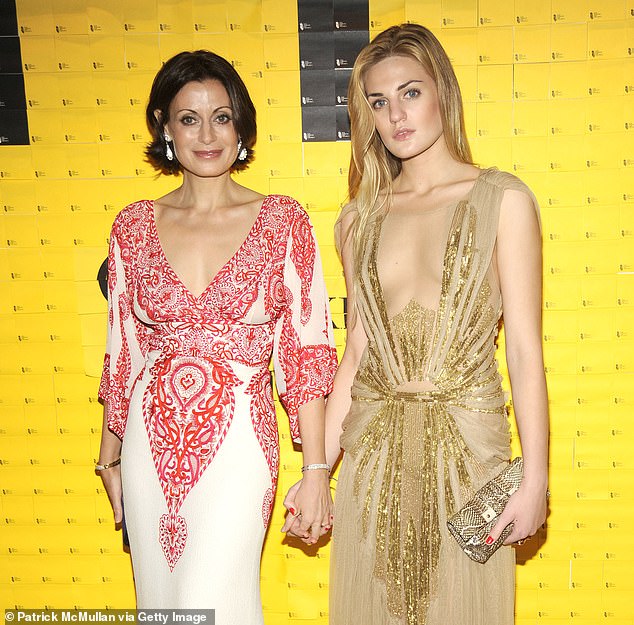 Last December, her City fund manager brother shot himself dead. Marina, who has a 31-year-old daughter and is married to her second husband, dermatologist Dr David Orentreich, now lives in New York and works as a portrait painter.

She remembers dancing with the late designer Michael Howells, who went dressed as a statue covered in ivy.

‘Everybody was so creative,’ she said. ‘I couldn’t understand why my hand was getting shredded. Then I realised his entire suit was covered in pins. It was lethal.’

Drinking from a bottle as she lounges on the sofa with fellow undergraduate Paul Newman during the 1981 Worcester College Ball, Alexandra’s satin jacket and shaggy locks capture 1980s student chic. 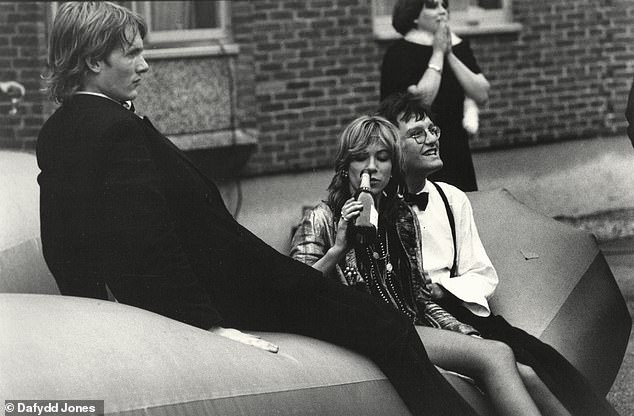 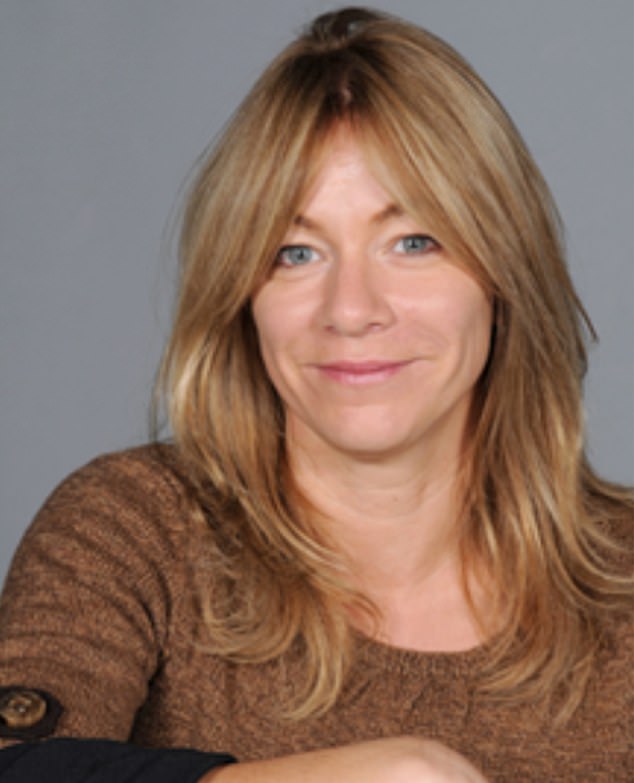 Four years after this photo was taken, she married Trinity College graduate Guy Jennings, now one of the world’s authorities on European and Impressionist art. Guy became deputy chairman of Christie’s in Switzerland, but they separated and she’s now married to Mark Fane, a trustee of the Royal Horticultural Society.

Alexandra, 57, has set up her own art consultancy, Alex Wellesley Wesley Art and Design.

Dafydd Jones: Oxford: The Last Hurrah is published by ACC Art Books and is on Amazon at £20. 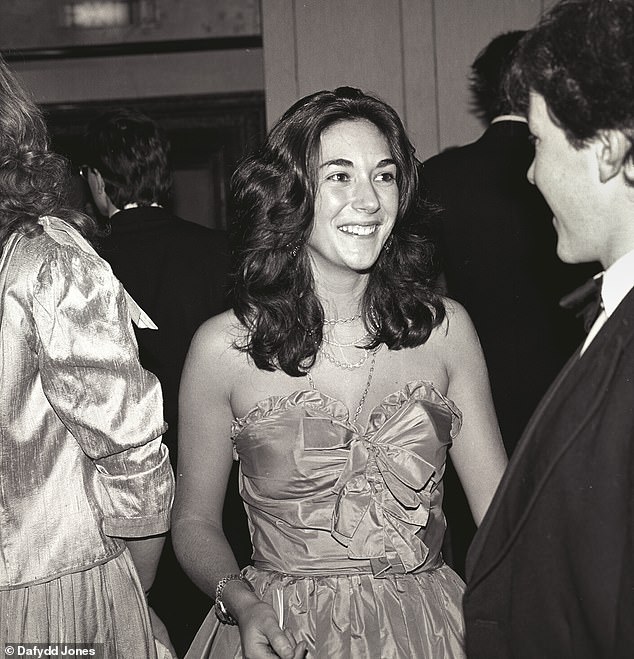