What CAN Trump do to shape up?

Fiber hidden in burritos and quarter-mile strolls on the golf course could be key to bringing President back from the obesity line, experts explain.

In a press conference on Tuesday, the president’s official physician said that Trump was in ‘excellent’ condition in spite of his fast food-heavy diet, adding that ‘if he had a healthier diet for the last 20 years, he might live to be 200 years old.’

President Trump told Reuters today that he is ‘okay with’ Dr Ronny Jackson’s prescription for a better diet and a bit of physical activity.

Daily Mail Online spoke to experts who came up some simple strategies that Trump’s team might prescribe to ease him into healthier habits.

President Trump’s love for fried foods and sedentary lifestyle have pushed his BMI near obesity, but experts suggested some substitutes that might still appeal to him

At 71, with a BMI over 29, Trump has an elevated risk for heart attack or other potentially fatal cardiac issues.

The president’s bad cholesterol levels have only continued to climb – from 169 last year to 233 in last week’s assessment – fueled by his beloved McDonald’s and Diet Coke.

‘It’s never easy to get started on a major lifestyle change, and many people do well with a slow, gradual approach,’ says Rui Li, CEO of New York Personal Training.

‘For example: when it comes to nutrition, I recommend starting with nixing out processed foods first and getting accustomed to preparing meals at home,’ or in Trump’s case, carefully designed meals cooked by the White House chef.

‘The next step is to nix out grains and revise the carbohydrate portions of your meals to be a quarter of your plate or less,’ he adds.

Fruits and vegetables are high in nutrients, which have protective effects, and are low in fats.

By including high fiber foods in his diet, Trump ‘won’t need to eat as much as he is,’ she says.

Fibrous foods are denser, taking up more room in the stomach, and take longer to digest, staving off hunger longer.

For someone Trump’s age, she recommends daily minimum intake of at least 30 grams of fiber.

‘I can’t imagine him getting that with the diet he’s living on now,’ Sharp says.

‘I always recommend more whenever possible, especially as you get older and want to promote regularity and if you’re trying to lose weight, fiber is really the secret,’ she says.

Sharp suggested easy substitutes for breakfast, lunch and dinner that would be better for Trump’s health, but might still appeal to his sensibilities. 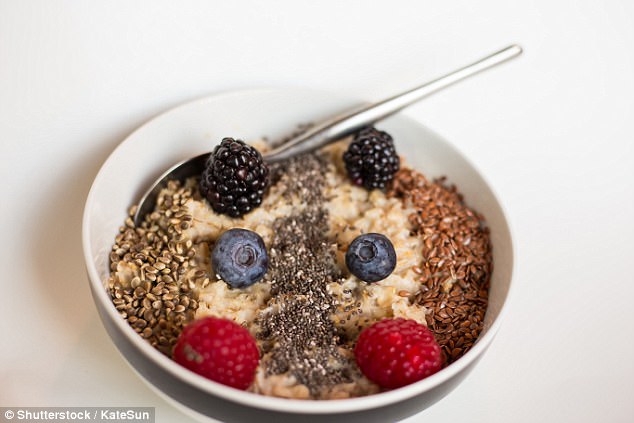 A bowl of oatmeal could offer a quick, easy way to Trump to fill up on fiber at breakfast

Oatmeal or a smoothie are quick ways to get fuller faster

Adding nutritious fruits that are also high in fiber, like pears or raspberries, can lend the oat-y breakfast cereals sweetness without sending the sugar content off the charts.

The president ‘may also want to grab a smoothie when he’s got one of those kind of crazy days,’ says Sharp.

To really boost his morning fiber, Trump could add a scoop of a fiber supplement, or ‘even some flax seed or rolled oats, because once they’re pureed in there, he’s not even going to notice.’

But the fiber will do its job and the president feel more sated, helping to curve potential snack cravings as the day wears on. 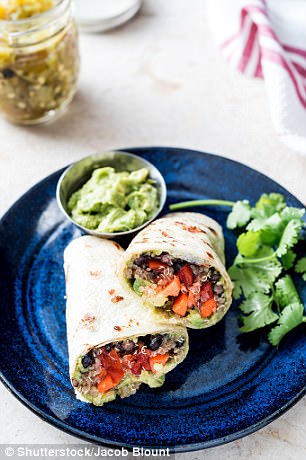 ‘A burrito might be a great option because he won’t see all the vegetables in there staring at him,’ says Sharp.

It’s easy to wrap a lot of fiber into burrito while keeping some of the outward charms of fast food.

‘Instead of packing it full with refried beans, you can use whole grain rice, quinoa, or [regular beans], which are an amazing source of fiber,’ Sharp suggests.

A few more substitutions bring the burrito up to muster: a whole grain wrap instead of a refined white flour one, and plenty of vegetables like avocado, tomatoes, cilantro, adding extra fiber, vitamins and antioxidants to Trump’s lunch.

There isn’t much room for Trump’s beloved burgers if he is redesigning his diet to trim his waistline.

Many ways of cooking use large quantities of oils chocked full of trans and saturated fats, both of which contribute to the clogging of blood vessels over time.

Fish, on the other hand, is high in healthy fats, including Omega-3.

The fatty acid helps to break down triglycerides, in turn lowering blood pressure and lowering risks for heart disease and stroke, which Trump’s stats suggest he could stand.

‘I’d urge him to try some fatty fish, like salmon,’ says Sharp.

‘I know that’s probably a stretch for him, so if we want to channel our childhood self, even some salmon fish sticks with a whole grain or oatmeal crust [would work],’ she says.

The best supplement would be a side of steamed vegetables, and some sweet potatoes, which are high in both fiber and antioxidants, plus, could be a way for Trump to ‘sort of get that junk food fix,’ Sharp adds. 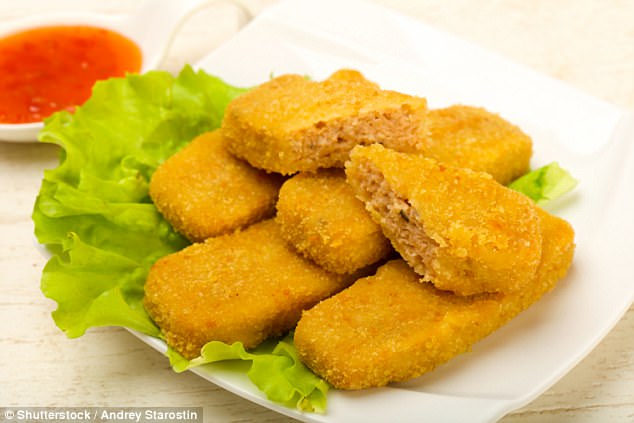 The American Heart Association recommends that adults get at least 150 minutes of moderate exercise or 75 minutes of intense exercise each week.

‘I get more exercise than people think,’ Trump told Reuters in an interview today.

He cited walking as his main source of exercise, especially on the golf course – even though he prefers to take a golf cart from hole to hole to save time.

Cutting out the cart might be a great place for Trump to start getting fit, according to Li’s advise.

At 7,511 yards, the Trump National Golf Club in Bedminster, New Jersey offers over four miles of course to to walk.

But Trump doesn’t need to get that ambitious, Li says.

‘When it comes to exercise, it’s a similar principle [to dieting]: ease into it with modest, doable activities,’ he said.

‘Start by walking a little bit more each week.’

Then, ‘Two weeks later, increase it to half a mile,’ he suggests.

He also advised  that Trump could do ‘regressed forms of exercises, such as squats by standing up from a chair, or push ups from the wall.’

‘The idea is, get good at one thing first, then start layering more on top, and maintain a slow pace with regard to adding more changes. Rome wasn’t built in a day, so there’s no need to rush through anything,’ Li says.