Before every Australian construction site was smothered in high-vis vests, orange traffic cones, and crawling speed limits, most workers could have been mistaken for anyone else.

Striking photos from the 1970s and ’80s show construction crews wearing whatever clothes they brought from home – often going shirtless under the hot sun – and scarcely any safety gear.

Shots from the building of the Western Distributor in Sydney in the early 1970s showed a worker pouring concrete by gripping a tube while wearing just a pair of gumboots.

A few others had yellow hard hats but many others made do with just bucket hats and jeans or shorts, with some not even wearing shirts.

A photo of the Casula Bridge even showed a man wearing just a very small pair of red shorts and a hat as he walked perilously close to the edge of the unfinished bridge.

Construction projects of the time were dominated by powerful unions like the Builders Labourers Federation, which shut down dozens of projects to protect heritage and locals from greedy developers.

One of the most famous ‘green bans’ was to protect 19th Century terrace houses on Victoria Road in Potts Point from demolition by developer Frank Theeman to build apartments.

Other photos recently released by Transport for NSW show the opening of the Kings Cross Tunnel on December 15, 1975, which was part of a drastic series of changes in the famous nightclub strip.

Thousands of Sydneysiders showed up to see the first cars roar through the tunnel, and were welcomed by ‘hostesses’ in summer dresses.

The photos showed the Kingsgate Hotel with the famous Coca-Cola sign, which opened in 1971 and was built on land cleared to build the tunnel.

Later photos show the opening of the Mooney Mooney Creek Bridge in 1986 to great fanfare, where more than 10,000 people walked over the bridge and a ceremony presided over by Prime Minister Bob Hawke.

The twin cantilever bridge, on the Pacific Highway west of Gosford on the NSW Central Coast, is now known to many locals as the NSW Big Dipper.

The celebrating even included a marriage ceremony on a stage on the bridge in front of the crowd.

A construction crew during a concrete pour on the Western Distributor, which links the western fringe of Sydney City with Rozelle in the inner west. The Distributor, which opened to traffic in stages starting 1972, was intended to be part of the North Western Expressway 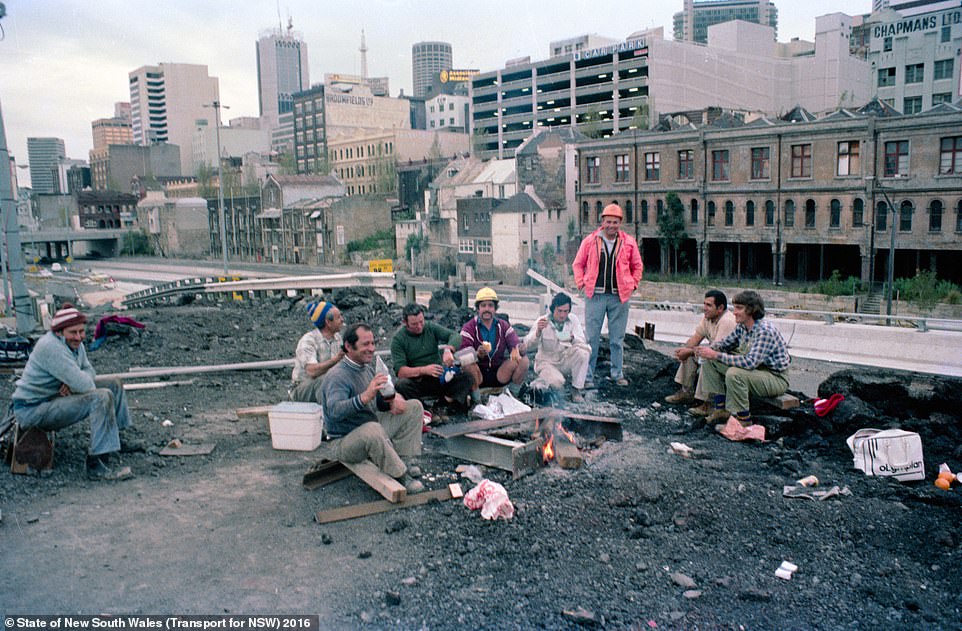 A work crew enjoys a break during construction of the Western Distributor, which would link Sydney City to the north western suburbs, ultimately joining the Sydney to Newcastle Expressway. However, due to public protests, these plans were later abandoned and the North Western Expressway never came to be realised 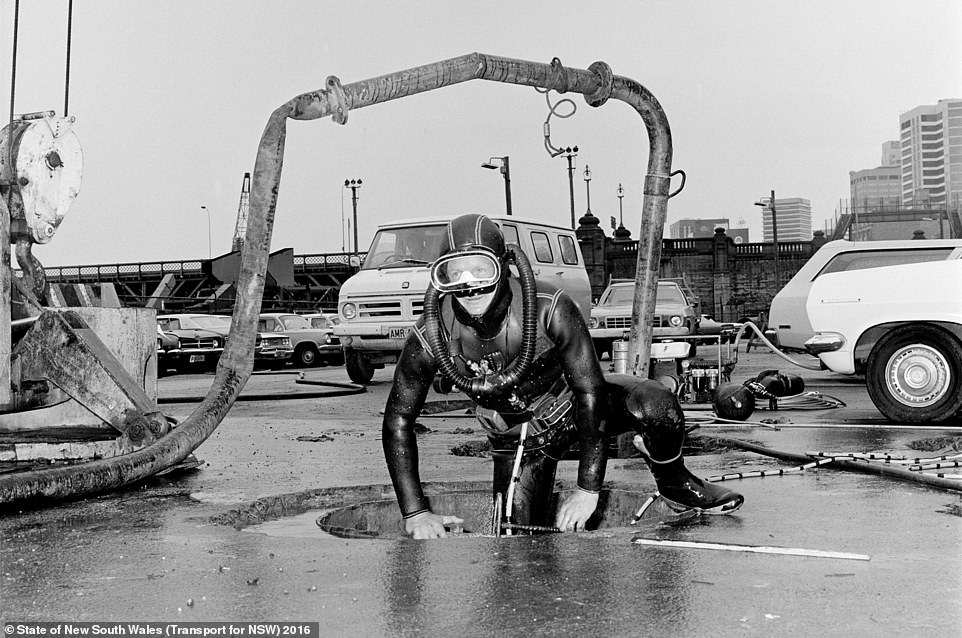 A diver emerges from a pile hole near Pyrmont Bridge in Darling Harbour during the construction of the North Western Freeway, also known as the Western Distributor. Pyrmont Bridge extends over Cockle Bay from Union Street, Pyrmont, to Market Street in the city. The construction consisted of mainly viaduct structures up to 25m high that were cast in place piles, bored to bedrock which were up to 25m below ground level. There were more than 400 piles in this section of the freeway construction, with a few foundations located beyond the original harbour shoreline where rocks were close to the surface. In some locations, buried remains of old wharves and other old structures were encountered. With pile holes filled with water below the surface level, divers were called upon to carry out necessary cleaning and further touching up of the excavated areas. The divers were employed to inspect, clean and seal the sides and bottoms of the sock holes. This cleaning work was carried out using a high pressure water jet to wash down the walls 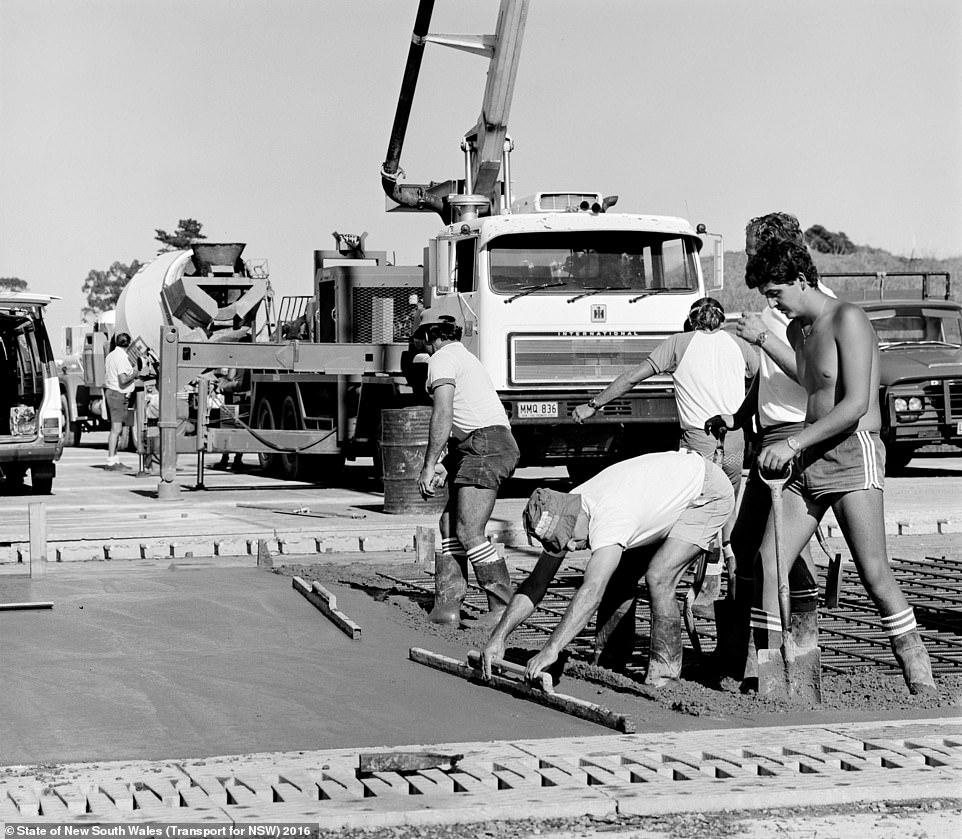 Paving of a section of the M5 South West Motorway that links Casula and Moorebank in Sydney’s south west. Once opened, this road would carry four lanes of freeway traffic between the Hume Highway in Casula to the west and Heathcote Road in Moorebank to the east. It incorporates a bridge over the Georges River, the western end of which can be seen in this image, where concrete is being smoothed over where the bridge rejoins the freeway, just before the Hume 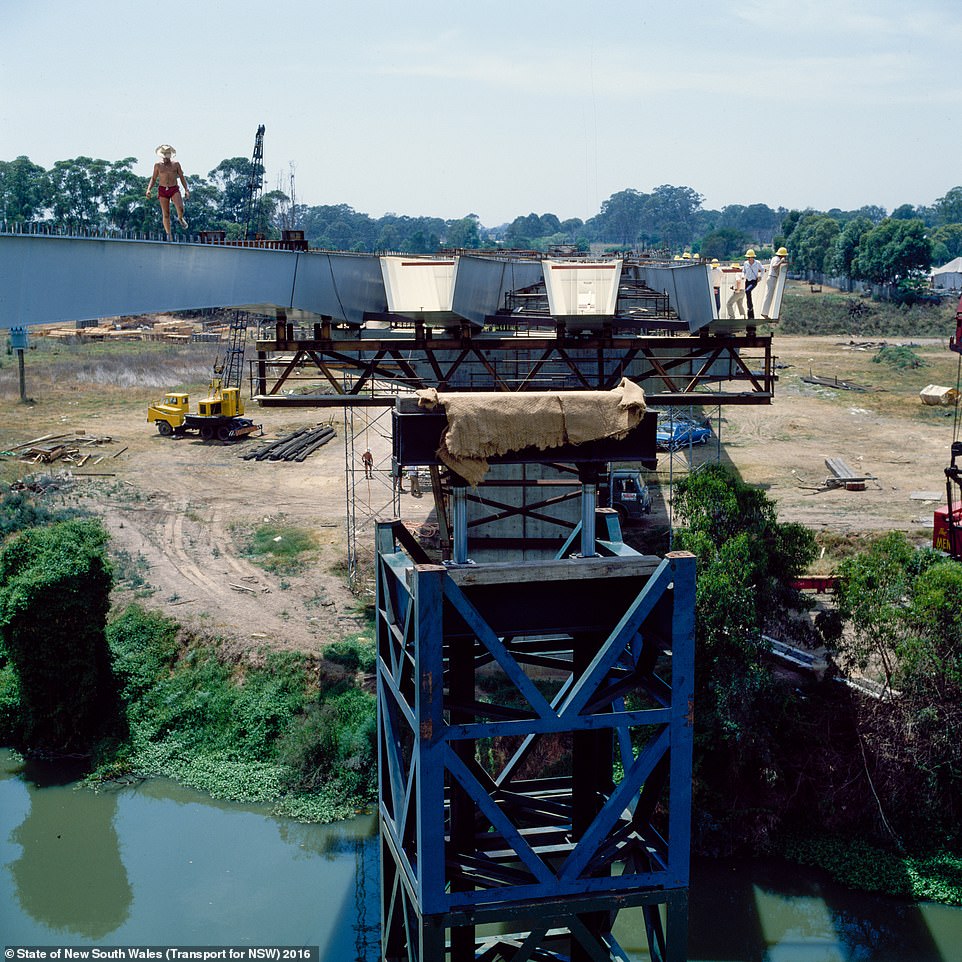 A construction worker wearing just a pair of tiny red shorts and a hat carefully walks over the structural foundations of the Casula Bridge, an extension on the South Western Freeway, over the Georges River in Casula, likely looking east towards Moorebank Avenue. The Casula Bridge is a 290m long, seven span steel trough girder and concrete deck bridge 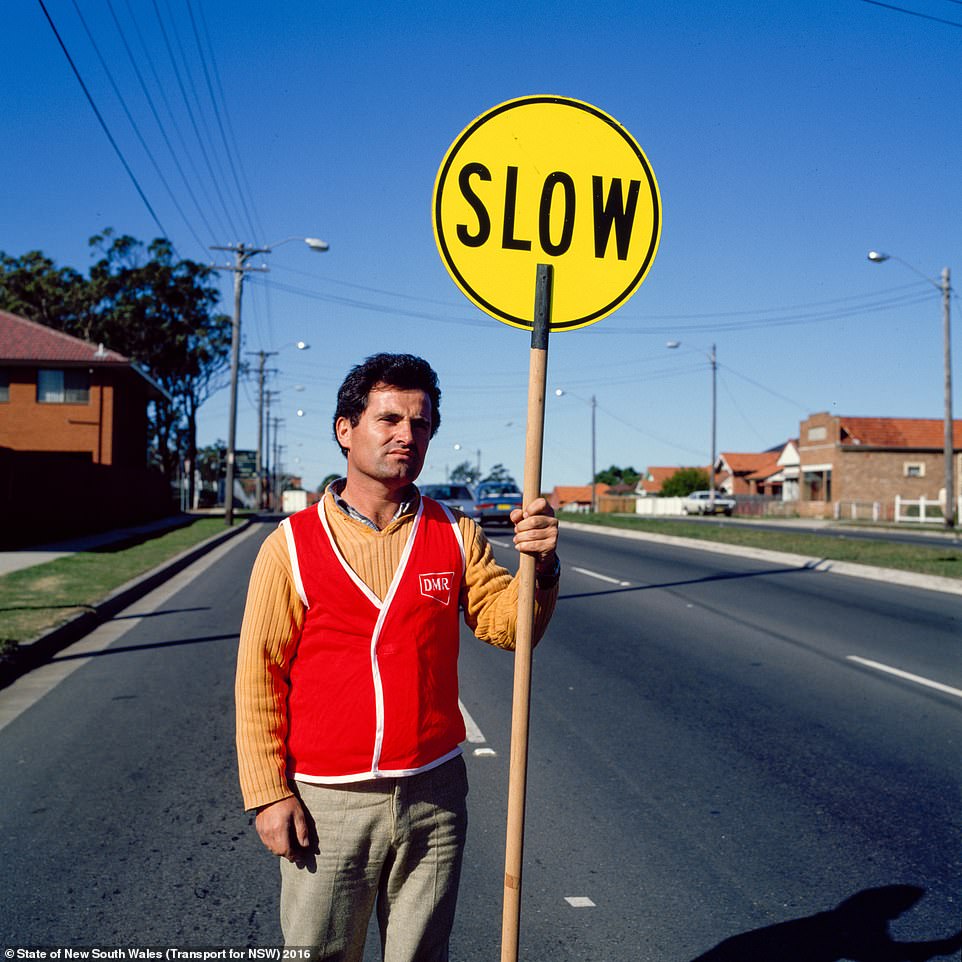 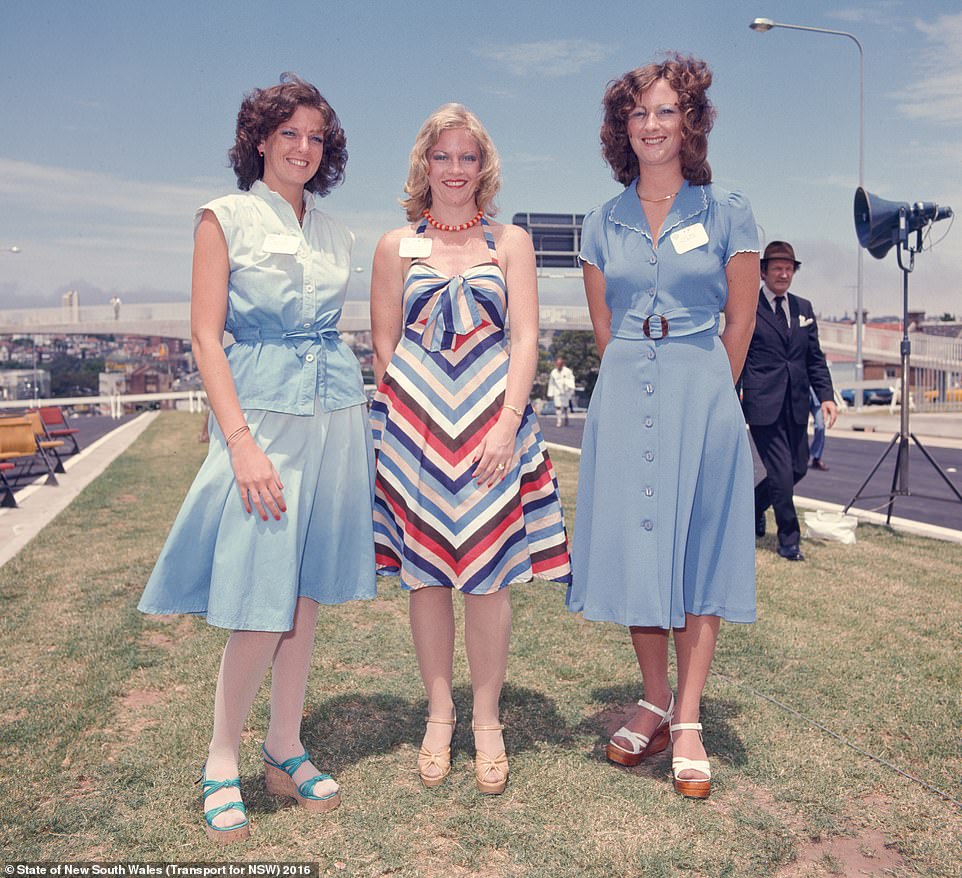 The hostesses of the official opening of the Kings Cross Tunnel, now part of the Cross City Tunnel. Standing left to right are Karen Mason, Jennie Shute and Margo Hulbert, with the Roslyn Street pedestrian footbridge in the background 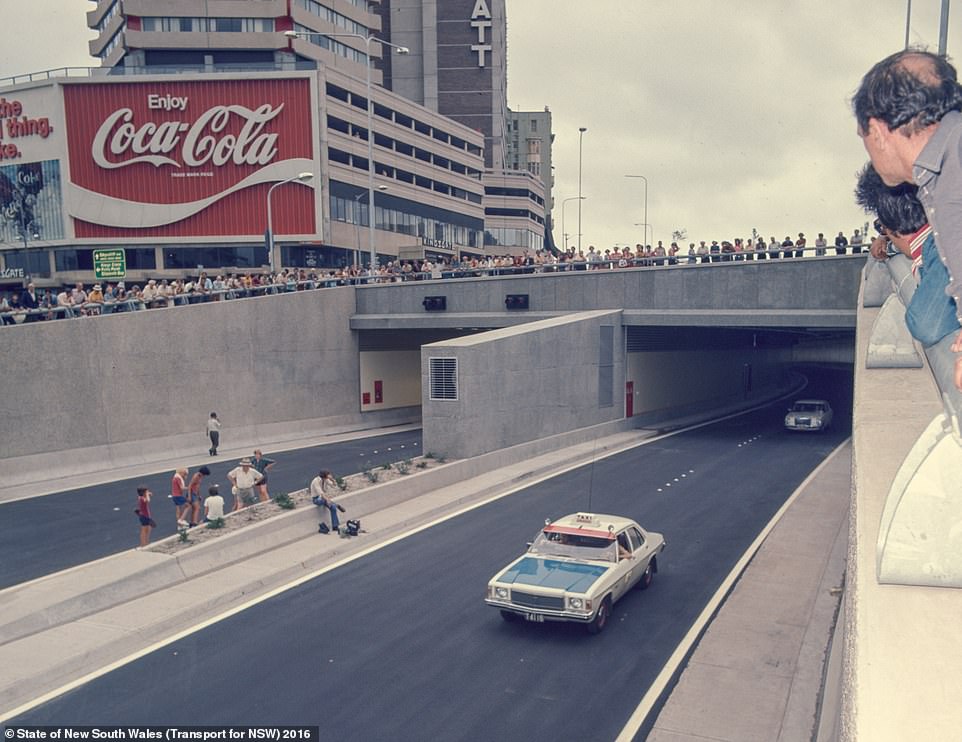 Crowds gather to watch the first cars emerge from the from the new Kings Cross Tunnel, looking east to the junction of Darlinghurst Road and William Street. The bridges at each end of the tunnel form the portals and carry cross traffic over the through traffic in the tunnel. The two tunnel cells are each 1,134m wide and about 4.9m high

The tunnel as it looks today with the Kingsgate Hotel to the left. Opened to the public in 1971, this hotel operated in various incarnations as the Kingsgate, the Hyatt Kingsgate and the Millennium, before its conversion in 2003 to an apartment complex known as Zenith Residences. The famous Coca-Cola sign still stands at the bottom 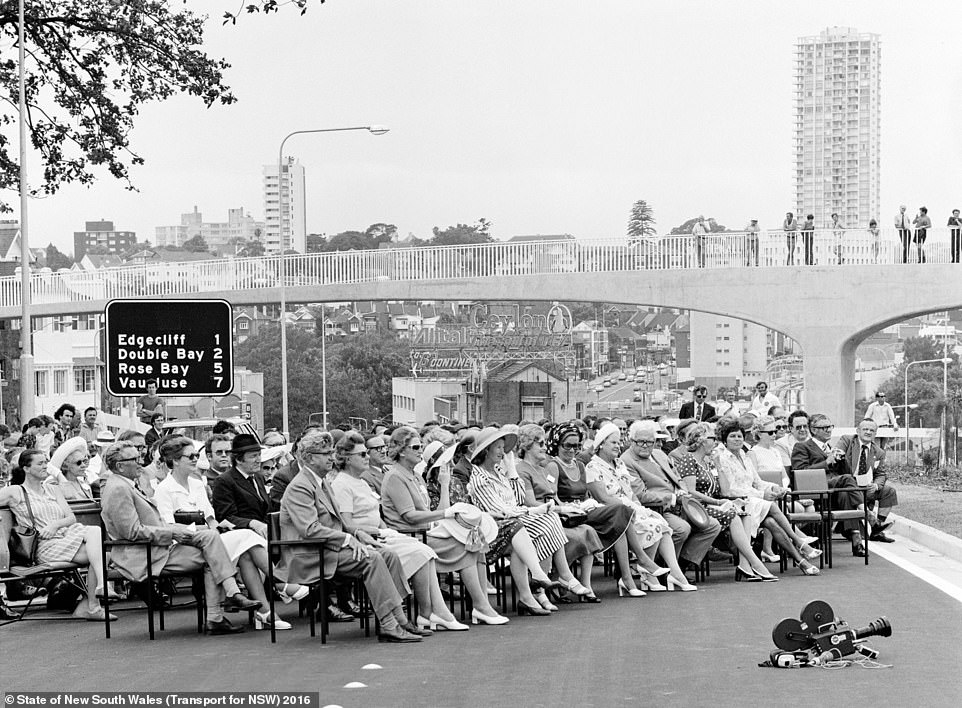 Dignitaries and members of the public watch official proceedings during the opening of the Kings Cross Tunnel near the junction of Bayswater Road, Kings Cross Road and William Street. Notable attendees visible in the audience include former Main Roads Commissioner John Alexander Lachlan Shaw, Commissioner Brian Joseph Sexton and former Inspecting Engineer Designer EF Mullin. Behind the pedestrian bridge, the Edgecliff portion of the Eastern Suburbs Railway viaduct is partially visible. To the left of the viaduct, unlit signs advertising Ceylon Tea and the airline Alitalia are mounted on Bayswater Road buildings that still operate as commercial premises today. Behind the footbridge, the tall white tower of Ranelagh Apartments on Darling Point Road can be seen. Also in partial view is the now demolished Whitehall Hotel at 85 to 97 New South Head Road, Rushcutters Bay 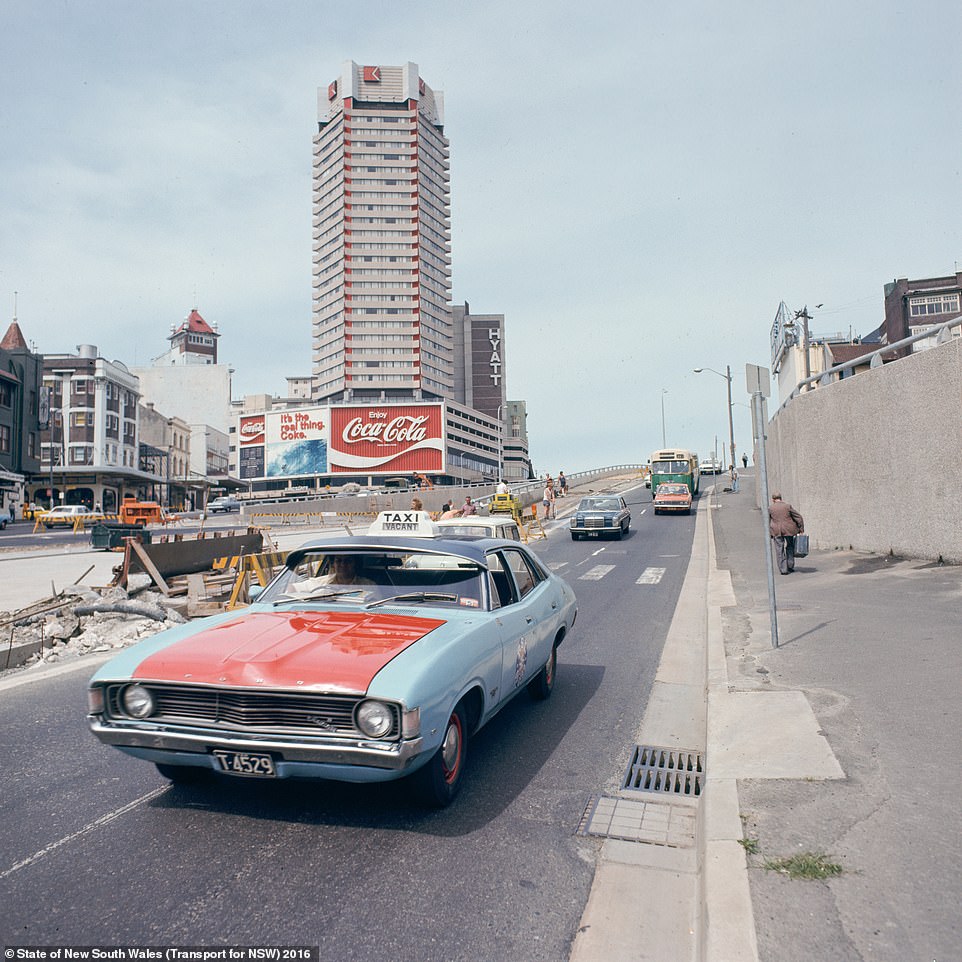 An XY Ford Falcon Sydney RSL taxi travels westbound on William Street, near the Victoria Street western portal bridge, during construction work on the Kings Cross Tunnel. Further east, a 387 Sydney bus passes a partially visible advertisement for Air New Zealand, which is mounted to the roof of a former Commonwealth Bank building on the corner of Darlinghurst Road and William Street. To the left of the roadworks, eastbound motorists pass the Kings Cross Hotel, travelling towards the Kingsgate Hotel on Darlinghurst Road 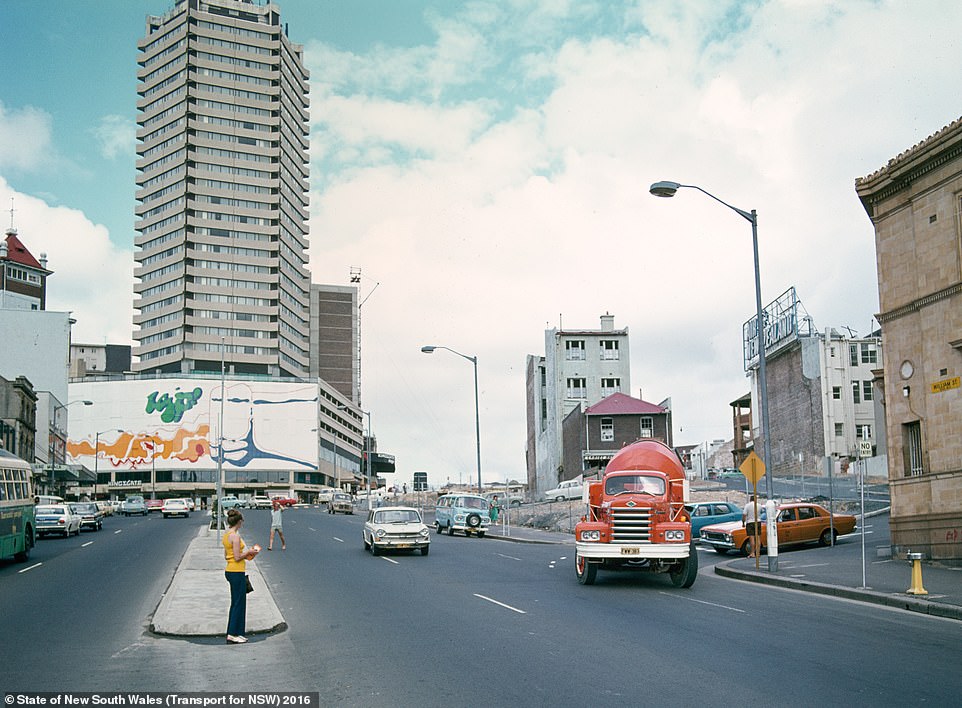 An earlier photo of William Street in Darlinghurst, looking east towards the Kingsgate Hotel during construction work on the Kings Cross Tunnel. Affixed to the base of the hotel is a mural designed by artist Roger Foley, also known as Ellis D Fogg, that is now the site of the landmark Kings Cross Coca Cola billboard. To the right of the construction site, at the junction of Darlinghurst Road and Victoria and William Streets, the Darlinghurst Fire Station is partially visible 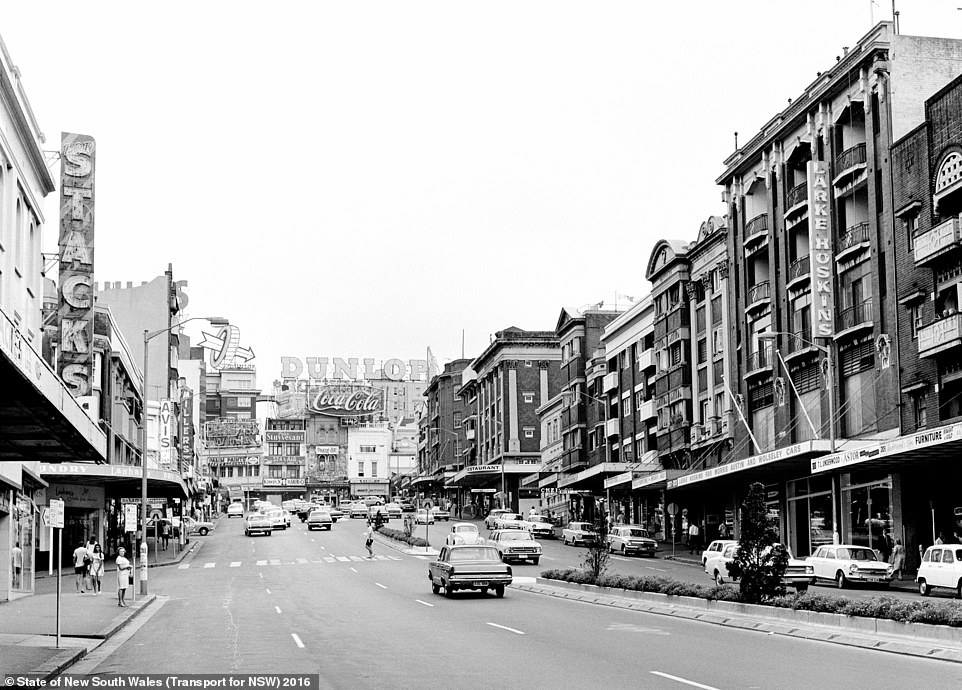 An east facing view of William Street, looking towards the junction of Darlinghurst Road and Victoria Street well before construction on the tunnel began. The buildings visible in the background were demolished to make way for the western entrance of the Kings Cross Tunnel. A precursor to the landmark Kings Cross Coca Cola sign can be seen affixed to one of these buildings. This sign was removed during the tunnel’s construction and was eventually replaced with the now famous Coca Cola billboard. A building with a neon sign reading Stacks is visible on the corner of Dowling and William Streets. This building once operated as Holden Motor Body Building Limited, also known as Holden House, an automotive workshop and factory dealership. In 1945, the site was bought by William J Stack of Stacks and Company, who renamed the building Stacks Corner. Along William Street, several signs advertising various products and businesses can be seen, including the Tomcat Club, Penfolds Wines, Dunlop, Millers Lager, Peter Stuyvesant cigarettes, and Kings X Barbeque 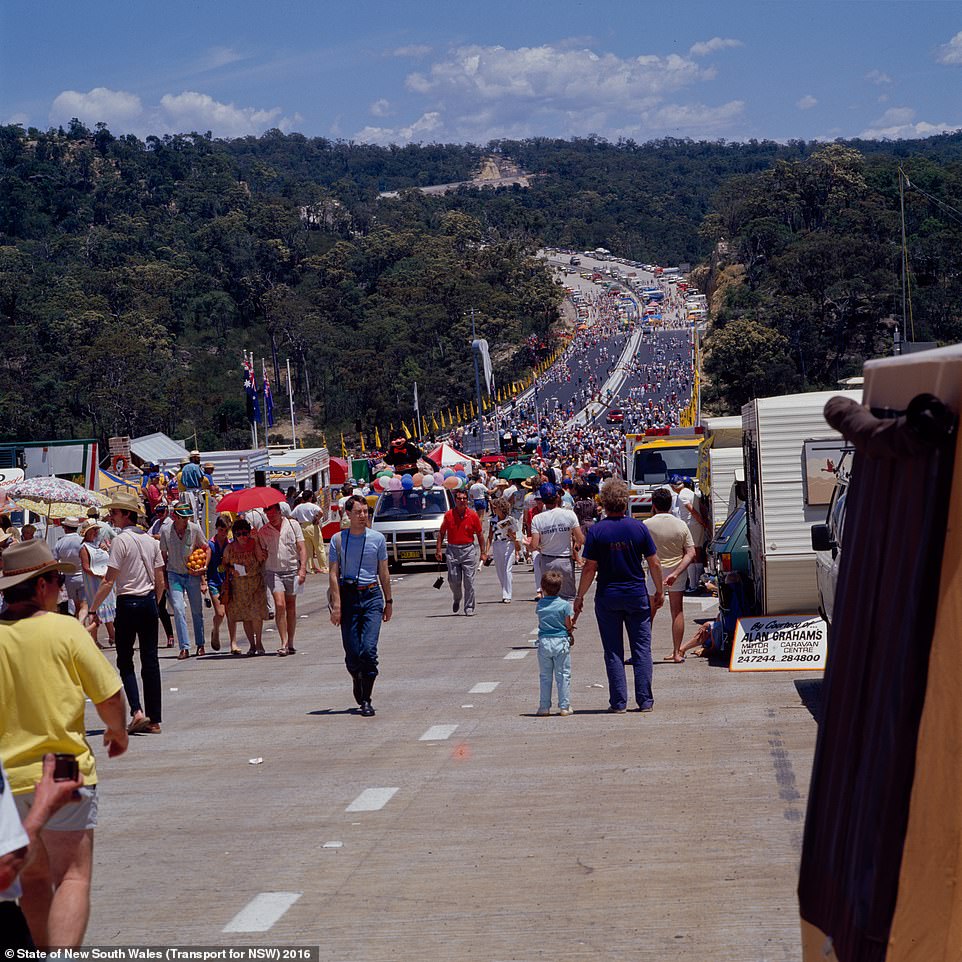 A south facing view, towards Calga, of crowds attending the official opening of the Mooney Mooney Creek Bridge on December 15, 1986, when more than 10,000 people crossed it. Building this 15km section of freeway required an immense amount and variety of work, with construction taking five years to complete. This section of the freeway eliminated a winding section of highway through Peats Ridge and reduced the journey by 14km 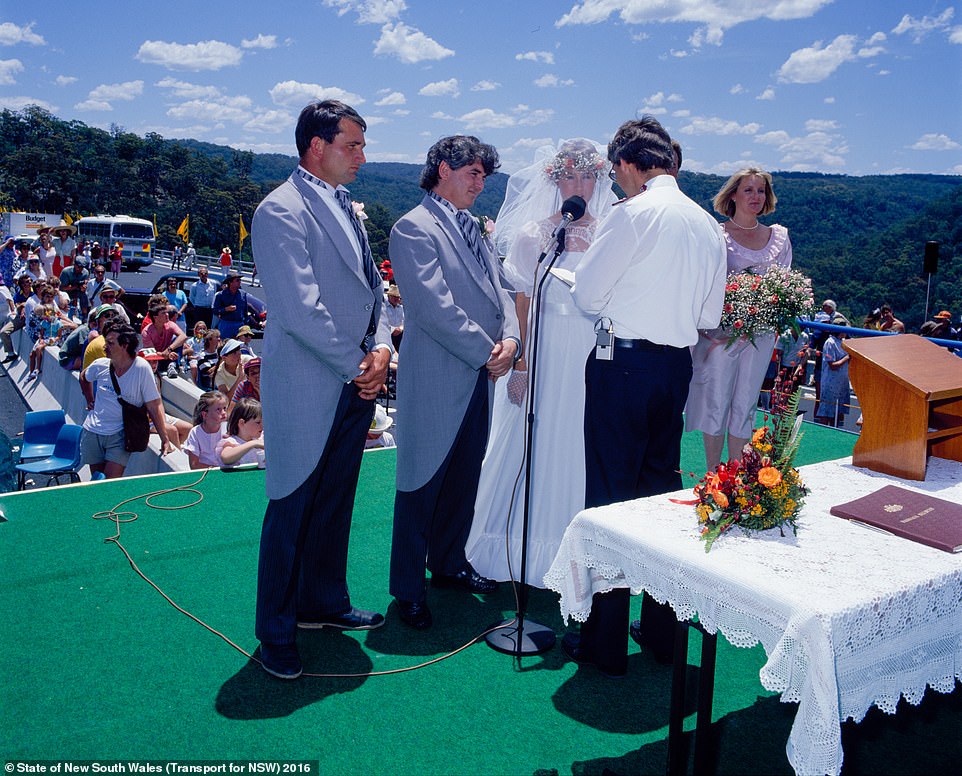 A member from the Salvation Army officiates the wedding of young bride and groom Barbara and Michael during the official opening of the Mooney Mooney Creek Bridge, after they won a Central Coast 2GR radio competition. The bride appears to be reciting her vows before the audience. An unknown Best Man and Maid of Honour observe the official proceedings that take place on a stage at the northern end of the bridge towards Somersby 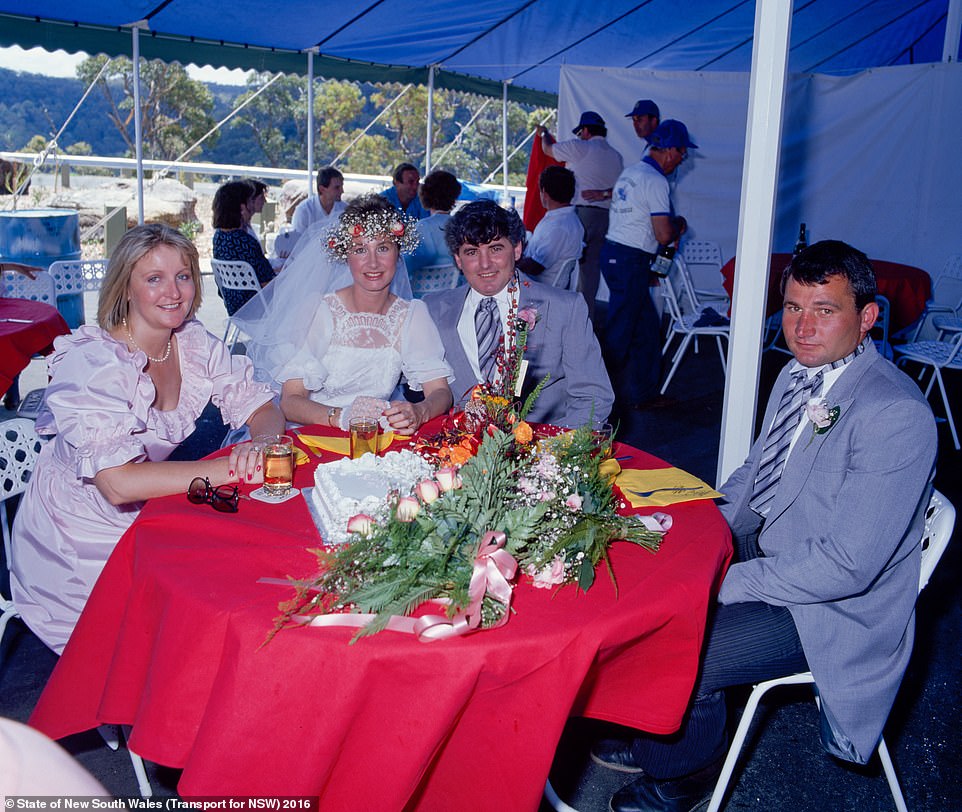 Newlyweds Barbara and Michael, and their wedding party, celebrate their freeway nuptials with a wedding reception during the opening of the Mooney Mooney Creek Bridge, in the Bridge Observation Area and lookout 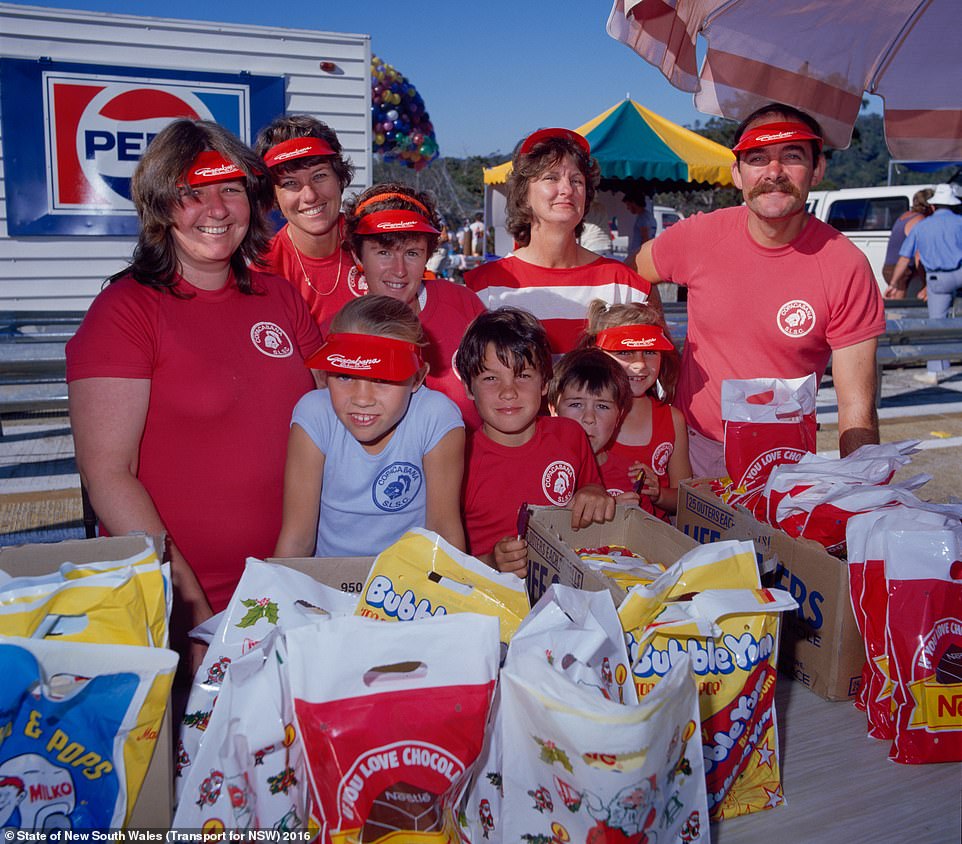 Members of the Copacabana Surf Life Saving Club sell a variety of showbags at the opening of the Mooney Mooney Creek Bridge. A unique stamp of Australian culture, throughout the 1980s there was an increase in the addition of comic books to showbags sold throughout the nation at various sports, social and cultural events. Visible showbags on display include Nestle, Milo and Bubble Yum. Behind the stall, an advertisement for Pepsi is partially visible 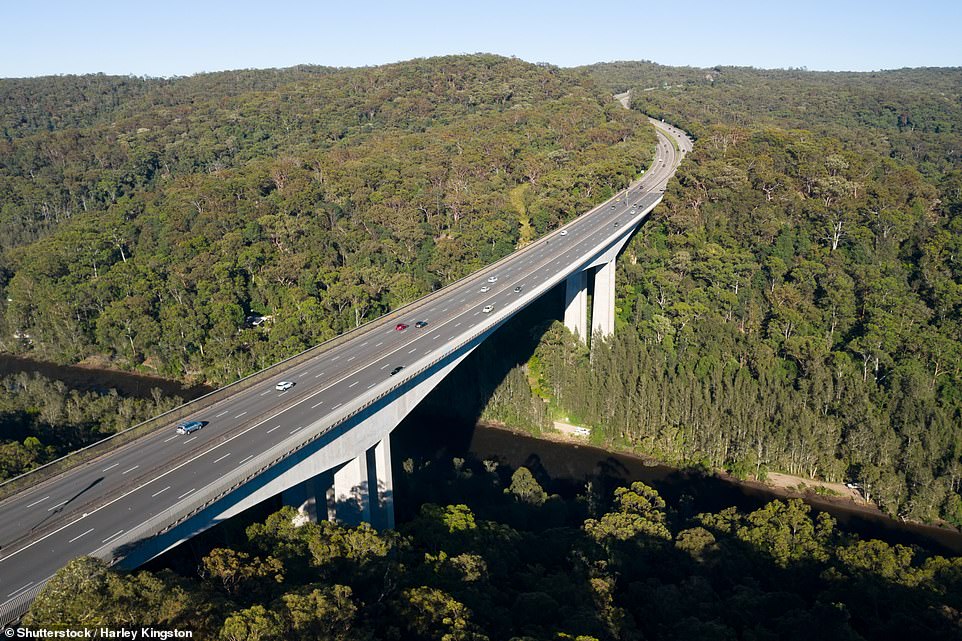 An aerial view of the bridge today, now known to many locals as the NSW Big Dipper. The twin bridges carry the M1 Pacific Motorway across Mooney Mooney Creek, through Brisbane Water National Park, standing at 16m higher than the deck of the Sydney Harbour Bridge 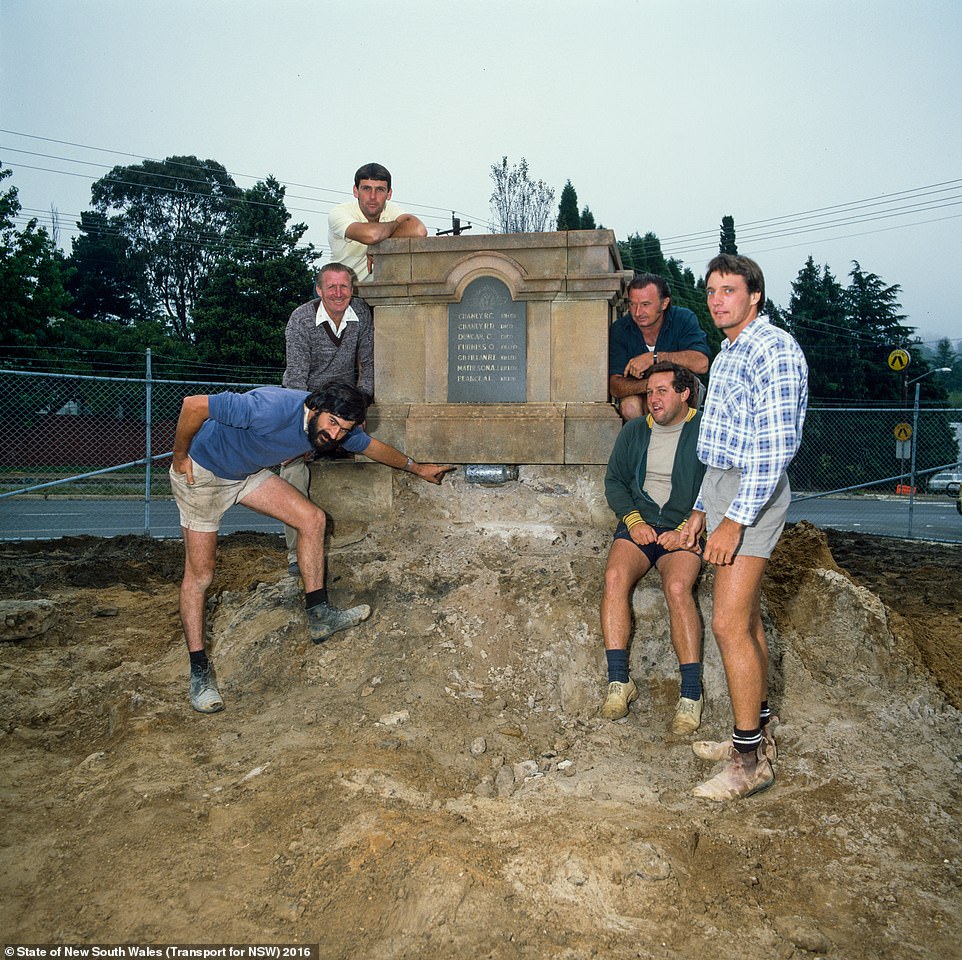 V Figge, W Rock, J Popouic, T Famey, D Baron and N Prichard stand at the original site of the Wentworth Falls War Memorial. Designed by architect John Burcham Clamp, the monument was originally located at the corner of the Great Western Highway and Station Street with unveiling carried out by Governor Walter Davidson in 1921. In 1984 the monument was relocated to Coronation Park on Station Street where a new commemorative plaque was unveiled by Major General Sir Ivan Dougherty 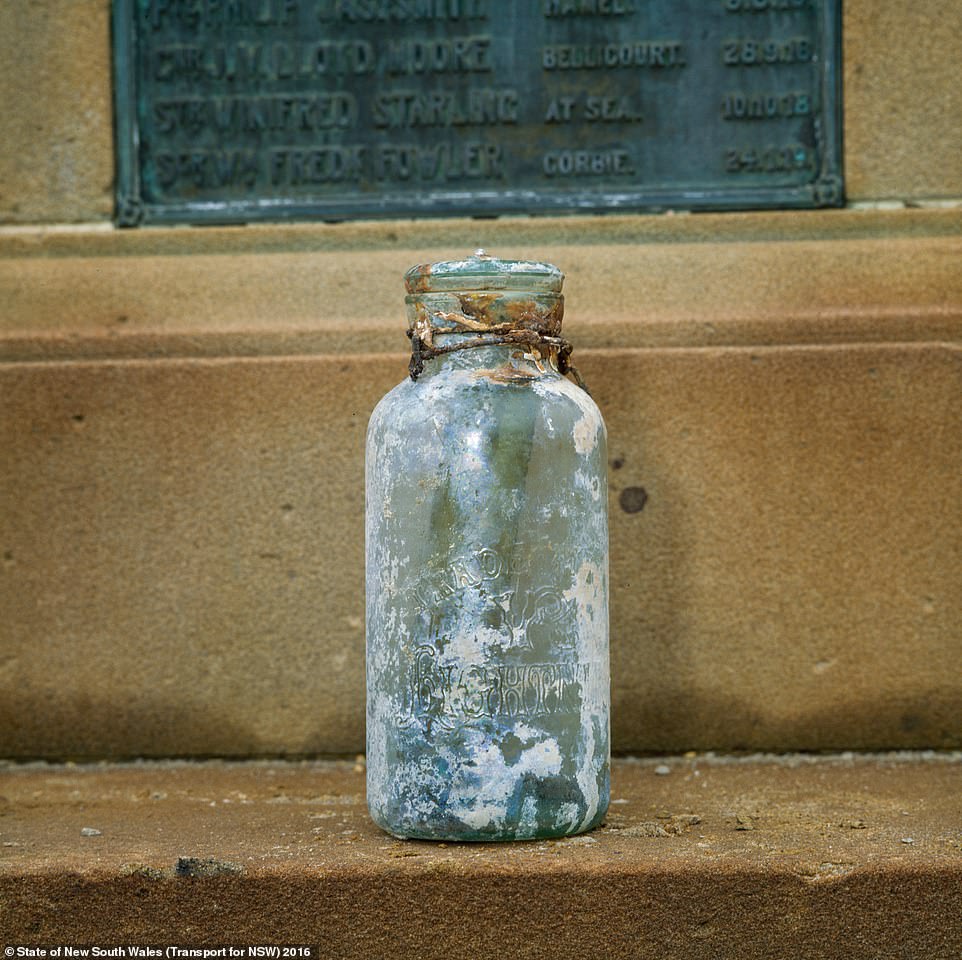 During relocation efforts of the monument, a Trademark VR Lighting fruit preservation jar, with a paper scroll wedged inside, was uncovered on site 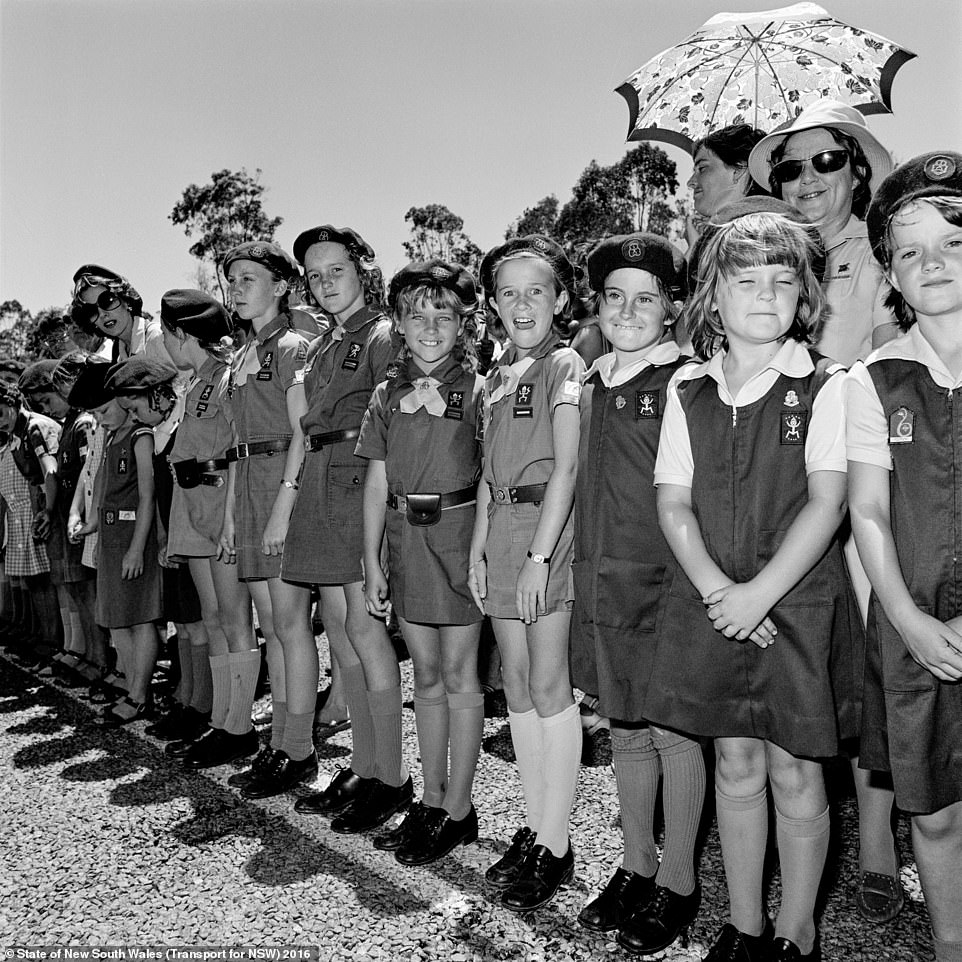 A group of children, mostly girl guides, at the official opening of the Pacific Highway’s Bellwood Deviation, which was built to bypass Nambucca Heads, about halfway between Sydney and Brisbane on the NSW Mid North Coast, on December 11, 1980 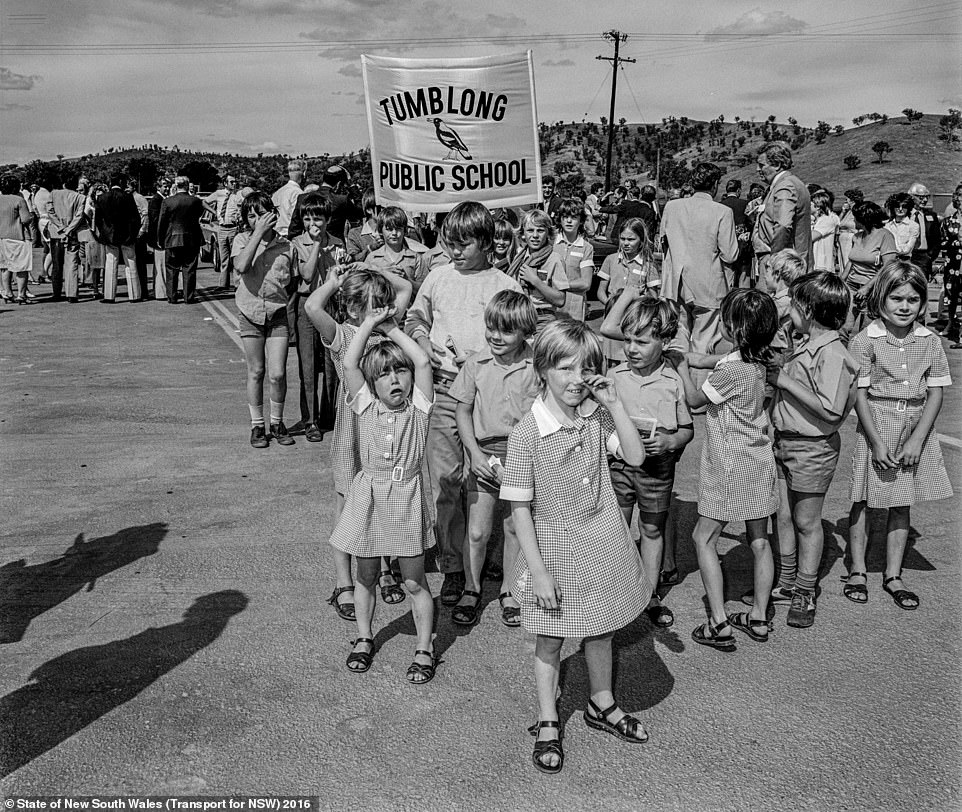 Tumblong Public School students gather at the official opening of Section 1 of the Tumblong Deviation, about 11km south of Gundagai. The original route of the Hume Highway near Tumblong was opened on December 23, 1938. In August 1980, work began on the new deviation