What do you really gain by eating RAW?

Raw food enthusiasts like Megan Fox praise the no-cook diet for requiring less calories to get more nutrients and feel fuller than they would from eating cooked meals, but nutritionists say that this isn’t necessarily the case.

Depending on the particular nutrients you are interested in – and the ingredients you hope to get them from – eating raw may be better for achieving some goals while cooking your food may boost your intake of other vitamins and minerals.

‘Some vegetables, you get more [nutrients] when they are raw, some when they are cooked, it really varies,’ says Keri Glassman, a New York City nutritionist.

We break down the surprising nutritional differences (or lack thereof) between raw and cooked ingredients in a popular raw vegan recipe.

A salad of red cabbage, carrots, brussels sprouts, kale, broccoli and ginger – with some light dressing – is the kind of lunch a raw vegan like Megan Fox could proudly enjoy, but we reveal the real nutritional values of the same ingredients cooked

Eating only raw foods automatically cuts out foods that have to be cooked or processed, including meat, dairy and eggs.

These ingredients tend to be higher in fat, low in dietary fiber and are prepared using methods that require heat and the addition of salt, sugar, oils or other additives that are associated with weight-gain, inflammation and disease.

The reverse is true for fruits and vegetables, most of which do not need to be cooked or processed to be edible.

But, ‘if you need them to taste a little better, cook them, so be it,’ Glassman says, adding: ‘but when you do have them cooked, it doesn’t mean it should be in cream or butter or they should be slathered in sodium.’

The American Heart Association recommends keeping processed foods – especially those cooked in hot oils – to minimize inflammation, and eating between 25 and 30 grams of dietary fiber a day.

Fiber helps to stabilize the digestive system, takes a long time to digest and makes us feel fuller faster, making diets high in the nutrient appealing to those who want to keep a trim figure, like Megan Fox and nearly-raw-eaters, Tom Brady and Gisele Bündchen. 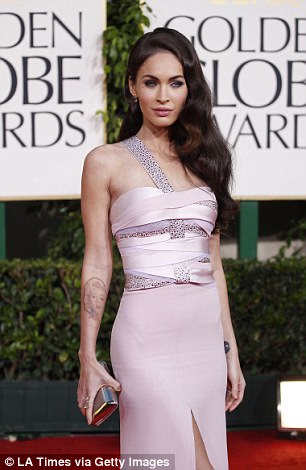 Cooking, especially at high temperatures, breaks down the cell walls of plants – including vegetables – allowing the nutrients within to escape.

This is particularly true of water-soluble vitamins, like vitamins C and B. But other ingredients are too difficult for our bodies to break down raw, so no matter how rich they are in nutrients, the benefits are lost on us unless these are cooked.

The science behind both principles is well-documented but the differences may be overblown.

Glassman says that the hype around raw diets comes from the oversimplified thought that ‘if you cook it, you’re going to destroy all the nutrients,’ but that’s not quite the case.

‘If you see brown vegetables like we all saw in college [cafeterias], some of those nutrients are lost. With overcooking, they don’t even seem like vegetables any more,’ she says.

‘But if you’re eating a variety – raw and cooked – you’re going to be fine,’ she adds.

So, we broke down the nutritional values in the raw and cooked versions of a veggie-rich raw detox recipe to see how much you really use by cooking your food.

COOKED: less than one cup

Like many superfoods, broccoli is packed with fiber, vitamins, and antioxidants. But, cooking broccoli by boiling or steaming it actually releases more of some of the vegetables most helpful nutrients.

Notably, studies have shown that at least one nutrient in broccoli, sulforaphane, is less accessible to the body in its cooked form. Sulforaphane has been shown to encourage detoxification in cells, helping to fight cancer.

Brussels sprouts offer the same nutrients, whether you prefer them cooked or raw

Brussels sprouts are beloved for their helpful effects for fighting cancer and diabetes and promoting bone health. But you get just as many nutrients from cooked ones as raw, except when it comes to vitamin K, which cooked sprouts are richer in.

You need about one-and-a-half time as many cooked carrots to get the same nutrients that are in one  cup of the raw root vegetable, but for this recipe, that’s only half a cup more

Root vegetables like carrots are great for oral hygiene, as well as being rick in antioxidants. Cooking them does diminish some of their nutrients, but overall you only need about half a cup more to make up for the value you lose.

Carrots are also rich in beta-carotene, a nutrient that digestion converts to vitamin A in the body. Beta-carotene give carrots their bright hue, and helps us maintain good vision. Studies have shown that we actually get a higher dose of beta-carotene from cooked carrots than raw ones.

Ginger gives up its nutrients to the body much more readily when it is cooked, so you only need a quarter of a tablespoon of the spicy root cooked, compared to a full raw tablespoon

The spicy root has become a trendy cure-all for everything from indigestion to morning sickness. Ginger is also a great source of antioxidants and has anti-inflammatory effects. In addition to being more palatable, we also absorb more nutrients from ginger cooked in our food than we do when it is raw.

Kale yields just a little more nutrition when it is cooked, so you need just a little less than two cups of the superfood to make a cooked version of a detoxifying dish

Kale has virtually no calories, but tons of antioxidants and nutrients that promote digestive health. For those who do not eat meat, kale is also a crucial source of iron.

You reap about the same benefits from raw or cooked kale, and even slightly more of some of its top nutrients, including protein, iron, and calcium when it is cooked. 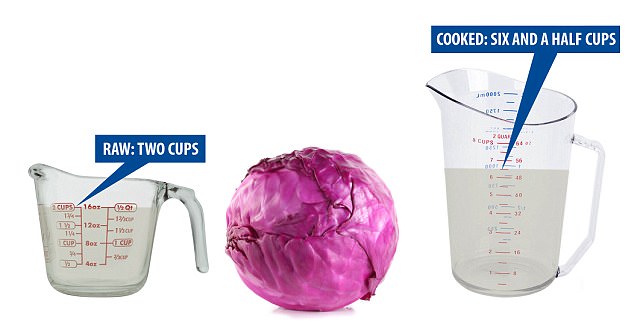 Red cabbage is much more nutritious when it is raw. You would need six and a half cups of cooked cabbage to match the vitamin K, calcium folate content of two raw cups

Red cabbage can help to protect against all manner of aging, keeping our skin, brains and eyes younger. In addition to its high fiber content – making it an ideal vegetable for dieters – cabbage is also rich in folate which may help combat depression, cancer and promote heart health in adults.

Folate, a type of vitamin B, is also key for pregnant women because it contributes to the formation of a baby’s spine and skull.

But it’s better to keep the cabbage raw in a slaw: you need almost three times as much cooked cabbage as raw to get the same amount of some of its best nutrients.

There is no need to be an absolute puritan when it comes to how you prepare and eat your vegetables. All diets benefit from including ample fruits and vegetables, but the necessary amount varies widely from person to person.

Because every fruit and vegetable comes with its own nutrient profile, cooking some may offer an advantage where others are better eaten raw. Short of utterly wilting them, a little heat won’t zap your vegetables of all their benefits.

As Glassman says: ‘However you are going to eat your vegetables,’ eat them.