By Helen Soteriou For The Daily Mail

All the ingredients of a small-town carnival are in place: marching bands, garish floats, a costume parade, candy floss. Flamboyance and fanfares. But here, in the deepest corner of Oregon on the north-west coast of the United States, it might help if you believe in aliens.

This is the home of UFO Fest, held in the small town of McMinnville in Yamhill County.

Each May, this community of farmers and wine-growers stages its celebration of the extra-terrestrial: the world of abductions, out-of-body experiences and close encounters.

Just a freak occurrence: McMinnville locals dress up as their favourite aliens

Many of the 20,000 who attend the three-day festival — and you can still get tickets — are firm believers in alien life, often referred to as ufologists; others, the doubters and the sceptical, come to enjoy the spectacle. In McMinnville’s Main Street, locals and out-of-towners, believers and non-believers, mingle. No one falls out.

This year will see the 20th anniversary of the festival, which began after a local farmer, Paul Trent, photographed an alleged UFO hovering around his farm outside McMinnville. Now known as the ‘The Trent Sightings’, his two photographs, taken on May 11, 1950, have passed into UFO legend.

The highlight of the festival is the costume parade, a colourful spectacle of tinfoil outfits and spaceships.

Speakers at the 600-seater auditorium in the community centre include Bob Lazar, who worked at the secretive government complex known as Area 51. He claims to have worked on the ‘reverse-engineering’ of crashed/captured alien spacecraft.

Also appearing will be Commander David Fravor, a retired Top Gun Navy pilot, who in 2004 encountered an oblong-shaped craft hovering above the Pacific Ocean. Fravor is reported as saying that he was ‘weirded out’. 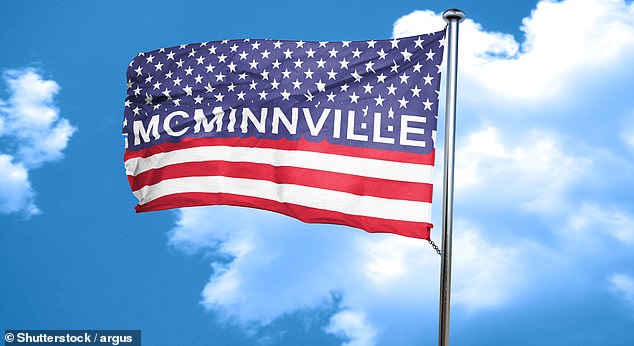 Around 20,000 are expected to attend the three-day festival in May

And that’s the point about this wacky festival, where the wine-tasting is billed as ‘Close Encounters of the 3rd Vine’.

Where else can you join an alien parade, dance in the streets, attend a lecture from an ex-intelligence officer and end the day with sipping pinot noir with ET?