What has he got to hide? Hilarious moment amorous man recoils when he kisses a girl on camera

What has he got to hide? Hilarious moment amorous man quickly recoils when he realises he has been caught kissing a girl on camera at a soccer match in Ecuador

By Natalia Penza and Luke Andrews For Mailonline

This is the hilarious moment an amorous couple appear to act like strangers after realising they have been caught kissing on camera at a football match.

But if they were trying to draw attention away from their moment of amor, their actions have backfired.

The bizarre second of passion captured at half-time during a Barcelona SC friendly match against Delfin in Ecuador on Saturday has gone viral. 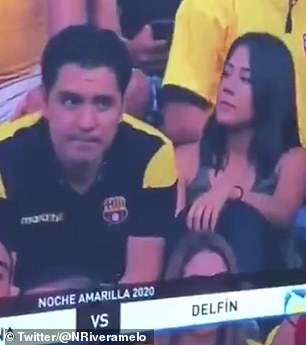 From kiss to frown: An amorous couple pretended not to know each other seconds after sharing a kiss at a friendly match between Barcelona SC and Delfin in Ecuador on Saturday

The unidentified man is seen cuddling close to his companion and locking lips with her before whipping his arm away after noticing they are being filmed.

He turns and tries to pretend he doesn’t know the brunette he just shared an intimate moment with.

The woman, who seconds earlier had melted in the arms of her partner, also seemed to shift uncomfortably in her seat before looking down at the ground.

Several South American papers assumed the man had been caught cheating on his real girlfriend, although there was still no confirmation of the claim.

Mexican sports paper Record said: ‘If you’re thinking of cheating on your other half, a football match in a stadium with thousands of people in the stands and millions more watching on TV would be the last place you’d go…unless you’re this nice Barcelona SC fan in Ecuador.’ 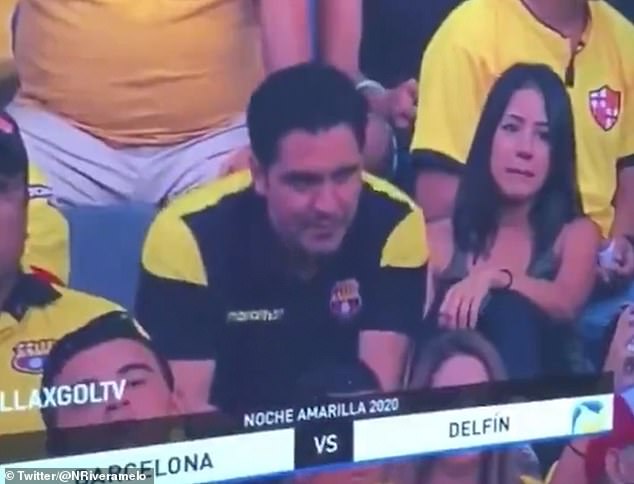 Why the long face?: The unidentified man whipped his arm away and looked forward while the woman appeared to shift uncomfortably in her seat when they realised they were caught on camera 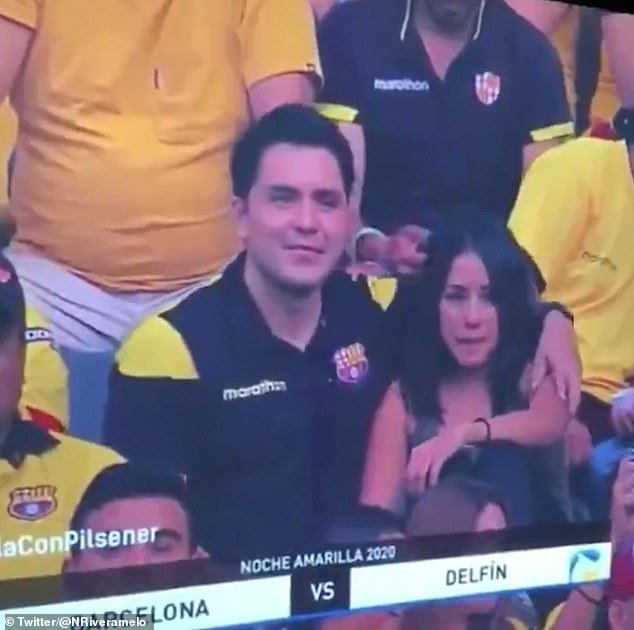 Mi Amor: Moments before the kiss the pair were filmed snuggling up together as they enjoyed the game

Another fan commenting on the footage joked: ‘The good thing is no-one is interested and nobody saw the Barcelona-Delfin match.’

Earlier this month a kiss at a US basketball game went viral.

The couple filmed launched into an intense smooching session when they were picked up by the kiss cam at a New York Knicks game on New Year’s Day.

The boyfriend even held up his phone to record their ten seconds of fame.