What if he’d been a terrorist? Mail on Sunday reporter gets INSIDE Ryanair jet at London Stansted

Shocking failures in airport security that could allow terrorists to plant bombs and smuggle deadly weapons on board British passenger jets have been exposed by a Mail on Sunday investigation.

An undercover reporter gained a job as a baggage handler at Stansted Airport, giving him easy access to aircraft holds and high-security areas, with no criminal record or background checks being made.

Within days of applying for the job our investigator was issued with a temporary ‘airside’ security pass that allowed him to be unsupervised in the hold of several Ryanair passenger jets.

Reporter Abul Taher is pictured in the hold of Ryanair flight FR2136 from London Stansted to Rzeszow, Poland, after having loaded all the suitcases

Even though strict rules say he should have been chaperoned at all times, our reporter was left unguarded while he loaded dozens of buggies transporting luggage to planes waiting to take off with hundreds of passengers on board – if he was a terrorist he could easily have hidden an explosive device in a suitcase with devastating results.

In contrast to Stansted, and most other airports, bosses at Heathrow view the so-called ‘insider threat’ posed by the airside passes so seriously that they recently tightened the rules. At the UK’s biggest airport, applicants for even a temporary pass must now first show proof of a clean criminal record, have a security interview and undergo a background check into their past 12 months.

As he reveals in his chilling account below, Abul Taher was able to roam freely around areas of the airport off-limits to passengers, even though his background had not been vetted. The Civil Aviation Authority (CAA) has launched an investigation into our findings.

Taher wasn’t even interviewed for the £8.80-an-hour job at Stansted – which is the UK’s designated anti-hijacking centre, to where any hijacked aircraft is diverted.

Ten days after beginning working full- time at Stansted, Taher called the firm to check the progress of the criminal record check on him, to be told: ‘We haven’t even started that yet.’

The Mail on Sunday launched its investigation after being tipped off by an industry whistle-blower claiming that staff shortages at Britain’s major airports were, in some cases, leading to glaring security failings.

He said baggage handlers and other staff at airports other than Stansted, including Gatwick and Manchester, are being issued with temporary security passes without proper background checks being made – putting the public at grave risk.

There was no interview, my references were entirely fake and no one had checked my criminal record, yet there I was crouching inside the hold of a Ryanair passenger jet in the high-security zone of an airport. 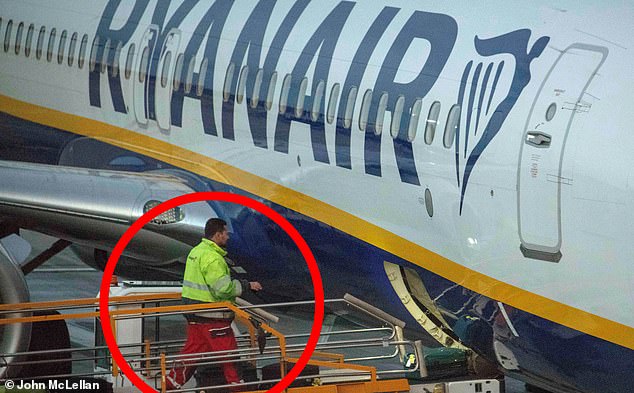 If I had been a terrorist, intent on bringing down a plane, the ‘airside’ security pass I was issued with – without any checks on my background – would have been a licence to kill on a catastrophic scale.

It would have been simple to plant a Lockerbie-style device inside the small mountain of luggage in the hold of flight FR2136 bound for Rzeszow, Poland, as it sat minutes from take-off at Stansted, packed with more than 100 passengers.

The alarming ease with which I was able to get a job in such a sensitive security area without proper vetting was all the more shocking because of the lack of supervision I was subject to once inside the airport. Strict Department for Transport rules, enforced by the CAA, state workers with a temporary 60-day pass like mine should always be supervised. But I was left alone several times – the perfect opportunity for a terrorist to strike in a secure area.

I was told I was late for my interview but instead of turning me away, they just skipped it and gave me the job anyway

I clambered into the holds of Ryanair flights bound for destinations all over the world, just a few feet from highly vulnerable parts of the aircraft, such as the fuel tanks and undercarriage, which minutes later would be passing over heavily populated areas of Essex and London. Three weeks earlier, when I applied for a job as a baggage handler at Stansted, which handles 20million passengers a year, I was assured I would be thoroughly vetted. The online advert posted by a recruitment firm stated there would be a ‘criminal record check’ and a rigorous examination of ‘five years of references’ – adding that explanations must be supplied for any gaps of a month or more in my employment history.

Applying under my real name, I created bogus websites for my past employers and used colleagues as fake referees.

But I needn’t have bothered – no one checked anyway, apart from a solitary unanswered email a fortnight after I started to one of my referees.

The first signs of a slapdash approach became apparent when I arrived at the shabby first-floor office of 3B recruitment in Witham, Essex. I had been told I would be interviewed and have to fill out forms. I was assured a criminal records check by the Home Office-run Disclosure and Barring Service (DBS) would be completed, and the references checked during two weeks of training.

But when I arrived, a woman member of staff told me I had arrived too late for the interview, and the office was closing for the day. Instead of turning me away, though, she took my passport and driving licence and her colleague handed me a stack of forms to complete and bring along to the start of training the following week. It suddenly dawned on me that I had already been given the job, without so much as an interview or any background check. But as the woman rifled through my passport, photocopying its pages, I was certain my cover would be blown. 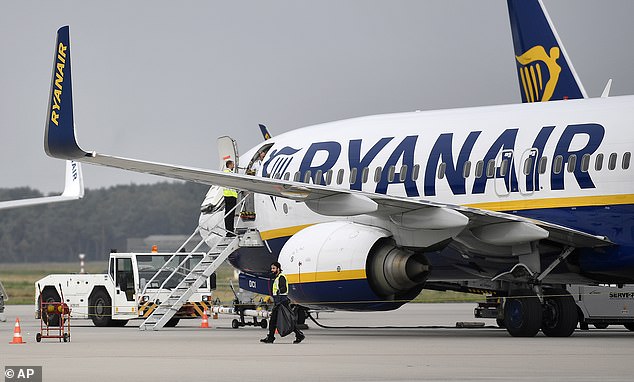 On one page, I had a visa for Pakistan which stated in capital letters that I was a ‘JOURNALIST’. She photocopied it without apparently reading it. There were also at least ten stamps showing I visited Istanbul between 2014 and 2016, when Islamic State was at its height, and Turkey, the favourite staging post for British jihadis crossing the porous border to train as terrorists.

Nevertheless, just two working days later I found myself inside Stansted’s Enterprise House – which also houses the airport’s police station – training as a baggage handler for global ground-handling firm Swissport, which has contracts with Ryanair, Emirates and other airlines. Crucially, I was issued with a temporary ‘airside’ pass, allowing access to areas which are off-limits to ordinary travellers.

To confirm my identity I was asked to produce my driving licence and passport. Even when I said I had forgotten my passport, this didn’t seem to matter and I was still issued with the white temporary pass.

My two weeks of training with 19 other trainees was a guided tour of the airport’s most sensitive areas – valuable intelligence for a would-be bomber. The recruits were told we must at all times be escorted by a staff member with a permanent blue pass, but I was regularly left unsupervised. 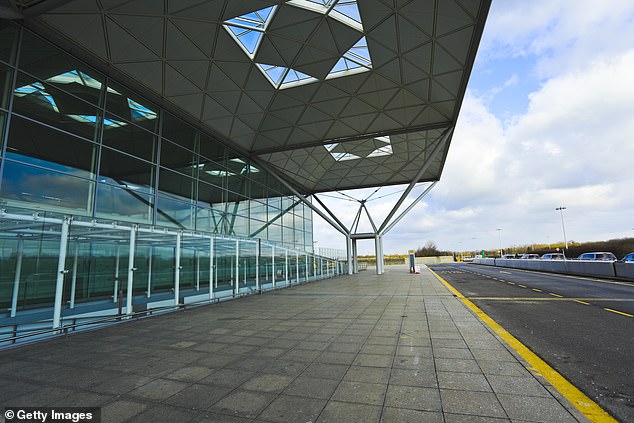 Unlike Stansted (pictured), and most other airports, bosses at Heathrow require show proof of a clean criminal record, a security interview and a background check into their past 12 months

We spent much of our time in the ‘Undercroft’, the massive baggage area of Stansted’s main terminal, an underground chamber with no natural light, nicknamed the ‘Belly of the Beast’. We even clambered into the gigantic hold of an Emirates Boeing 777.

At the start of each shift, along with other workers, I had to pass through a metal detector and my belongings would be X-rayed. But aviation security expert Julian Bray explained these measures would not be enough to stop a determined terrorist cell – making the criminal records and references even more vital for anyone entering a secure area.

‘This is a serious breach. A criminal records check is very important, because it points to character,’ he said. ‘This could be a group of people and it’s quite possible they could bring in the components of a bomb or a weapon piece by piece.

‘One has a lump of explosive, another the detonator, somebody else turns up with a battery, and another brings the triggering device, which could be a mobile phone. Then you pop into the toilet and you put it all together.’

In only my second week in the Undercroft the rule that I should be ‘escorted’ was broken when a supervisor took most of our trainees off for a cigarette break.

For 20 minutes, one other non-smoker and I were left free to wander and I was able to discreetly photograph luggage chutes and conveyor belts.

I could have secreted an explosive device inside a bag, hundreds of which were either falling down chutes or piled on dollies (trucks), waiting to be loaded on planes.

That lunchtime, I called agency 3B and asked one of the recruiters if they had received my DBS report as it was now ten days since I joined. Her answer stunned me: ‘We thought we’d wait until you finish your training before we apply. So we’ll do it next week now.’

Other workers said they, too, were still waiting for criminal records checks. One, who had been there several months, said he described his previous job as self-employed on his CV – then was amazed to be called by the agency asking him to provide a reference for himself.

One day, the eight people in my team were shown to a luggage chute by a supervisor and promptly abandoned. Team leaders with permanent passes, supposedly monitoring us, also soon disappeared.

So we were left alone for up to an hour, free to go where we pleased.

It is believed a Russian airliner blown from the sky in Egypt in 2015, killing all 224 on board, was brought down by an aircraft worker. 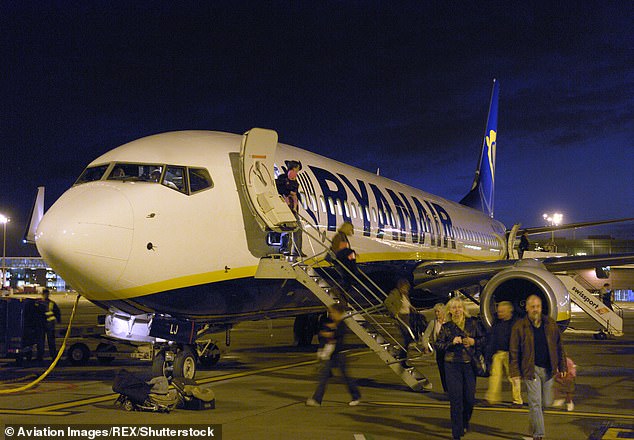 One Saturday I was left alone again, this time loading bags on to dollies that would take them to Ryanair flights. I saw no CCTV cameras and I had all the freedom to place a bomb in the hundreds of bags that fell down the chutes that morning.

On another day, while I loaded and unloaded planes, my team leader was out of sight on the ground, leaving me alone in the holds, stacking bags. For a terrorist it would have been the perfect moment to place a bomb inside a bag, or hidden within the mound of suitcases.

Last night, a Department for Transport (DfT) spokesman said: ‘We are aware of this allegation and the CAA will investigate whether there has been non-compliance with security regulations.’

A spokesman for Stansted said: ‘The issuing of all airside passes and implementation of security processes at Stansted is done in strict accordance with DfT regulations. All members of staff working in an airside location are subject to the full range of security checks.’

A Ryanair spokesman said: ‘All handling at Stansted is operated by Swissport. As recently announced, we will move to OmniServ as a new handler from February 2019.’

A 3B Recruitment spokesman said: ‘We carry out thorough security checks on all candidates in accordance with the requirements of Swissport.’