What if Michael Jackson’s date in Thriller tweeted about it afterward?

Michael Jackson’s music video for Thriller remains iconic 35 years later — but swept up in the incredible song, story, and dancing, few people have any sympathy for the poor woman that Jackson’s werewolf-zombie character took out on a date in the short film.

That is, of course, because she isn’t real — but what if she were? And what if she’d had Twitter?

Comedian Roy Wood, Jr. took the time to imagine just what it would be like if the events in Jackson’s music video took place today — and the woman lived to tweet about it afterward. 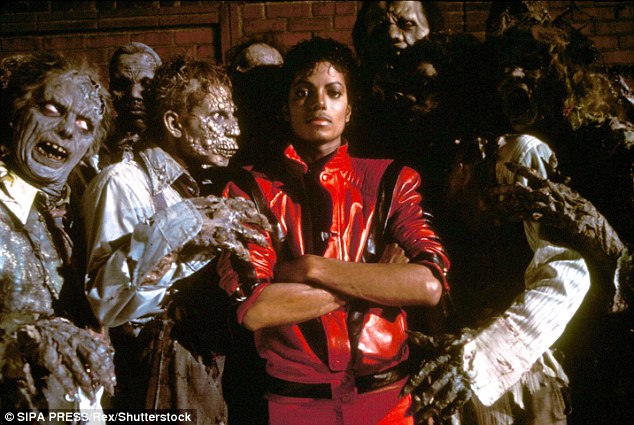 Iconic: A viral Twitter thread imagines what it would be like if the events in Michael Jackson’s Thriller music video happened today 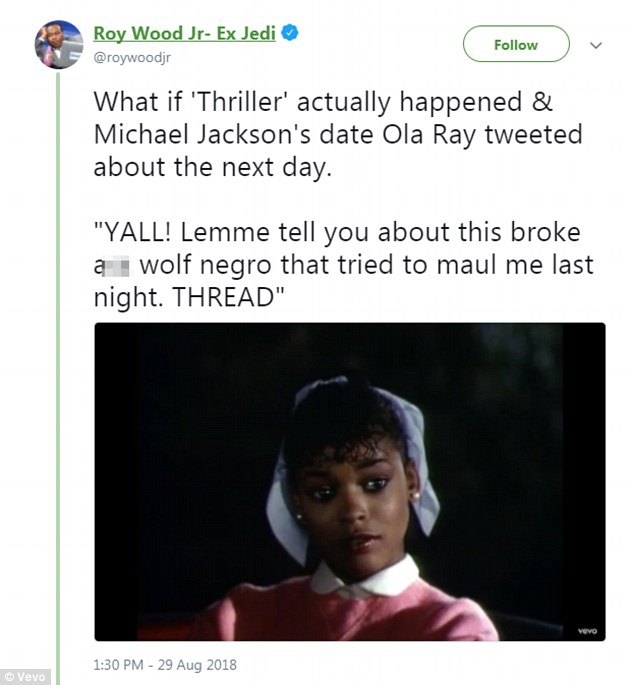 THREAD! Comedian Roy Wood, Jr. wrote a play-by-play in the voice of Ola Ray, if her character had been real and had access to Twitter 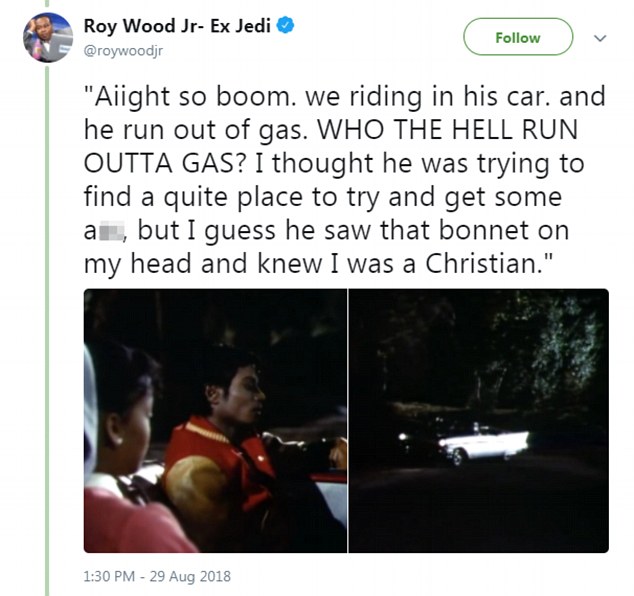 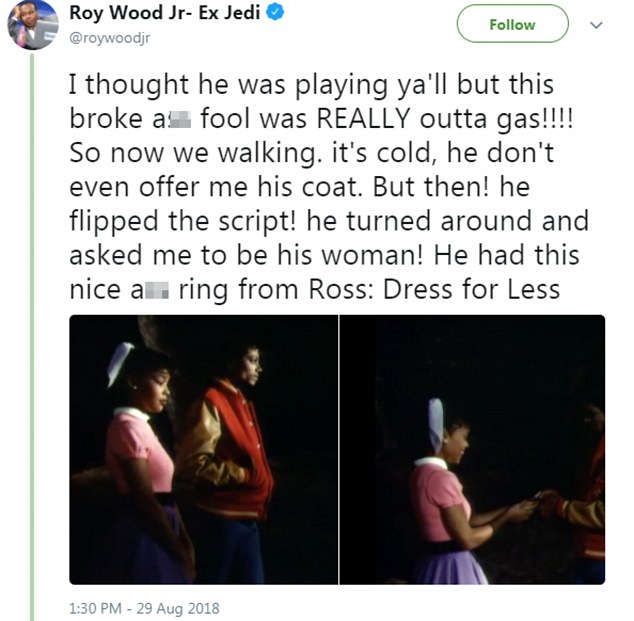 Something evil’s lurking from the dark… In this retelling, Ola Ray thinks Michael Jackson is giving her mixed signals

Wood does stand-up and sometimes appears on Comedy Central’s The Daily Show, so he’s given the joke a bit of thought.

On August 29 — what would have been Jackson’s 60th birthday — he tweeted what he imagined would be the way the whole thing might have played out.

‘What if Thriller actually happened & Michael Jackson’s date Ola Ray tweeted about the next day?’ he wrote

He then switched gears, writing in Ola Ray’s voice as if she were crafting the tweets.

‘YALL! Lemme tell you about this broke a** wolf negro that tried to maul me last night. THREAD,’ it began.

‘Aiight so boom. we riding in his car. and he run out of gas. WHO THE HELL RUN OUTTA GAS? I thought he was trying to find a quite place to try and get some a**, but I guess he saw that bonnet on my head and knew I was a Christian.’ 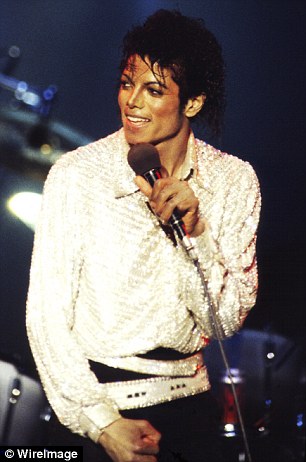 Thriller night: Jackson’s hit song came out in 1983, but fans are loving Wood’s reimagining of the video (right) 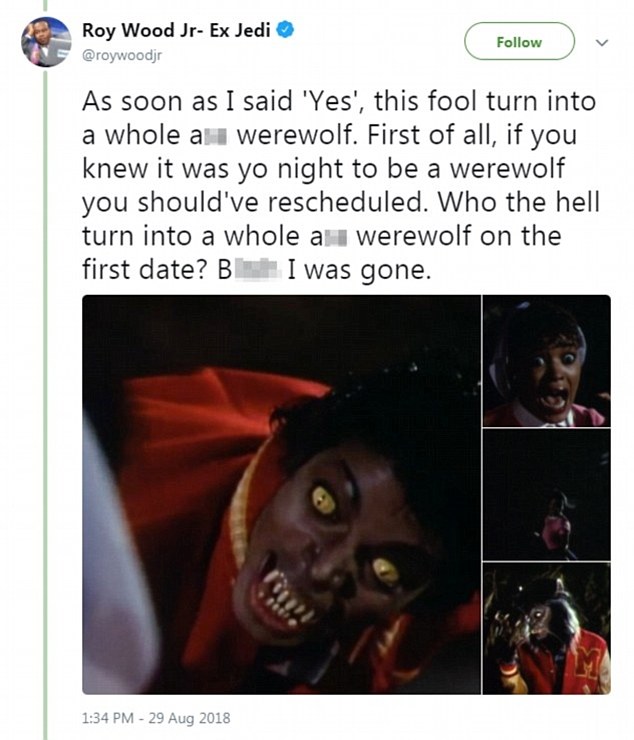 No one’s gonna save you… In the thread, Ola is less upset that Jackson turns into a werewolf than the fact that he should have realized the night of the full moon was problematic for a date You try to scream! The funny thread has earned thousands of fans 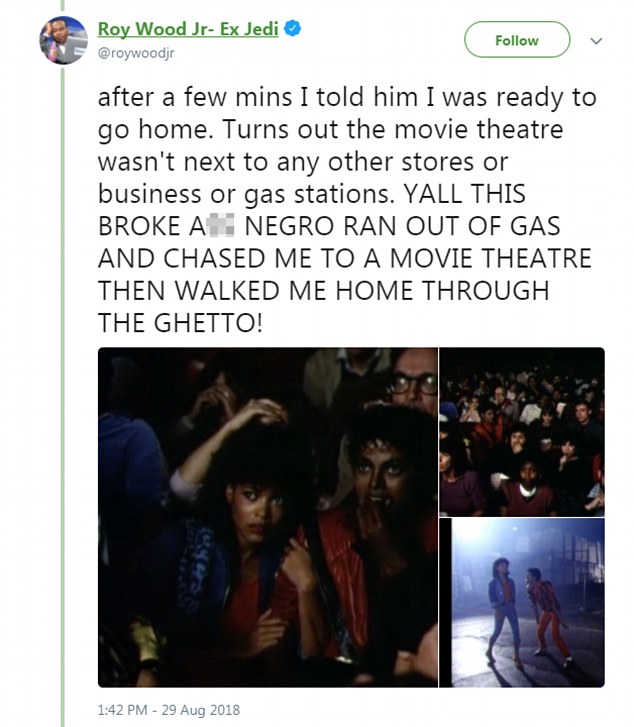 You start to freeze! She also points out how strange it is that the movie theater in the video is in the middle of nowhere

Here, Wood attached some stills from early on in the music video, showing Ola Ray with a ribbon in her hair riding alongside Jackson. 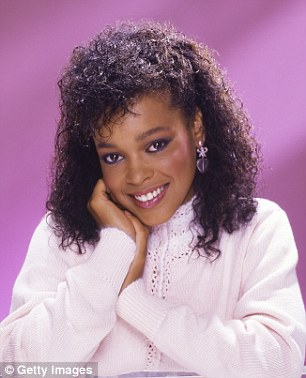 ‘I thought he was playing ya’ll but this broke a** fool was REALLY outta gas!!!! So now we walking. it’s cold, he don’t even offer me his coat. But then! he flipped the script! he turned around and asked me to be his woman! He had this nice a** ring from Ross: Dress for Less.

‘Meanwhile he running through the woods tearing up trees n s***. wasn’t no where I could hide. You know they say them werewolves be smelling s*** real good.

‘So I find a movie theater and dipped off in there. He followed me in there. but by then he was regular again. 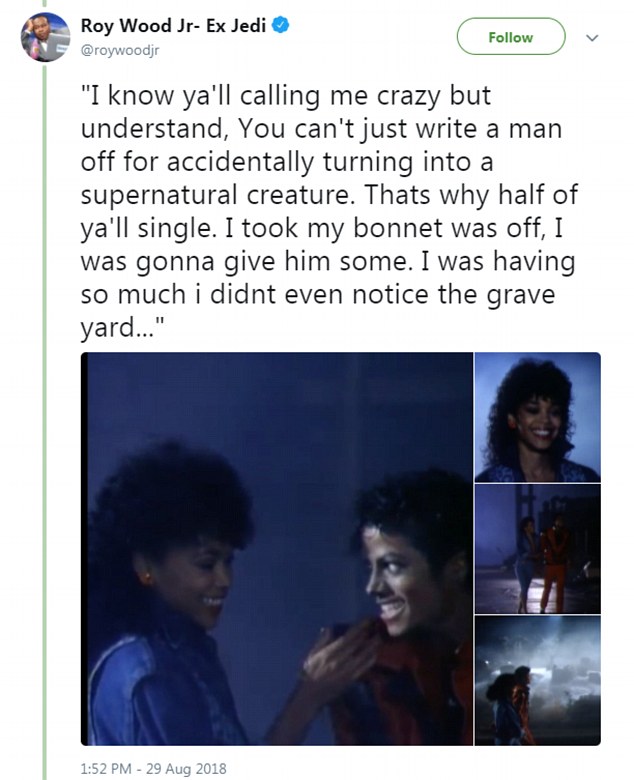 It’s OK, werewolf… He even takes on the tone of a woman explaining away a man’s bad behavior and trying to be accommodating 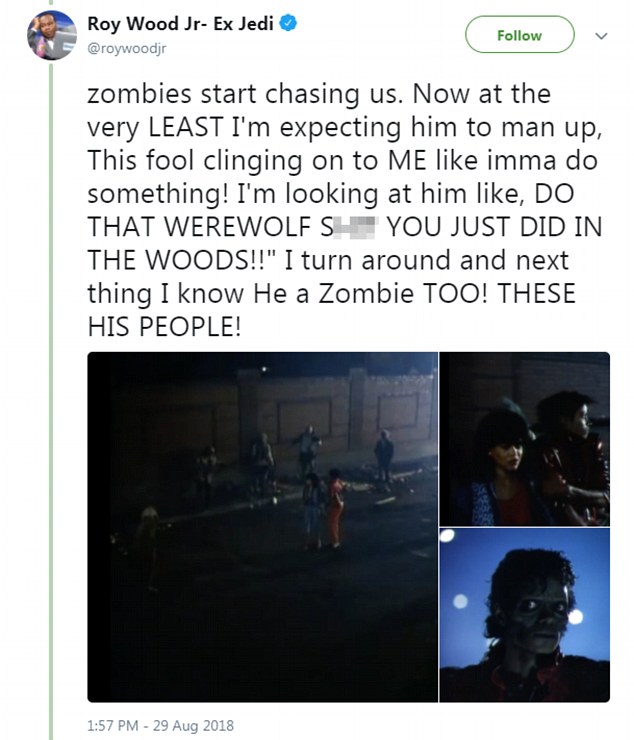 He writes incredulously: ‘Next thing I know He a Zombie TOO! THESE HIS PEOPLE! 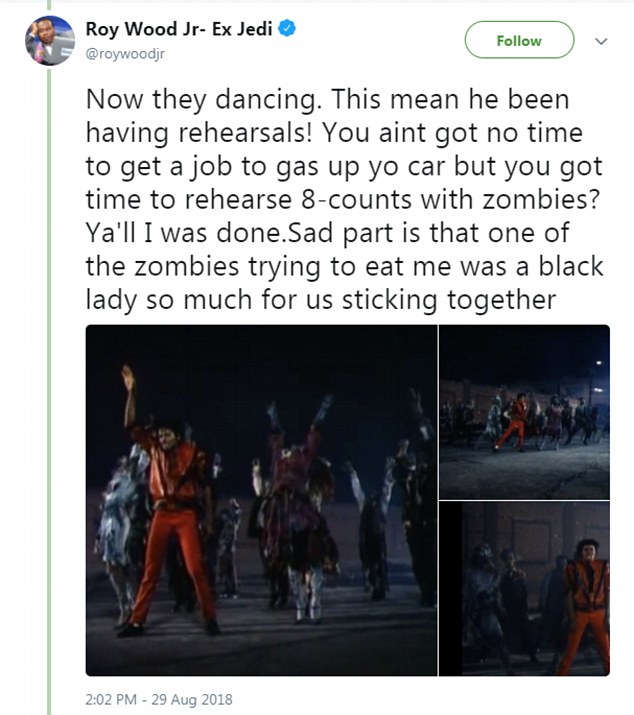 ‘After a few mins I told him I was ready to go home. Turns out the movie theatre wasn’t next to any other stores or business or gas stations.

‘YALL THIS BROKE A** NEGRO RAN OUT OF GAS AND CHASED ME TO A MOVIE THEATRE THEN WALKED ME HOME THROUGH THE GHETTO!

‘I know ya’ll calling me crazy but understand, You can’t just write a man off for accidentally turning into a supernatural creature. That’s why half of ya’ll single.

‘I took my bonnet off, I was gonna give him some. I was having so much I didn’t even notice the grave yard…

‘Zombies start chasing us. Now at the very LEAST I’m expecting him to man up. This fool clinging on to ME like Imma do something!

‘I’m looking at him like, DO THAT WEREWOLF S*** YOU JUST DID IN THE WOODS!!” I turn around and next thing I know He a Zombie TOO! THESE HIS PEOPLE! 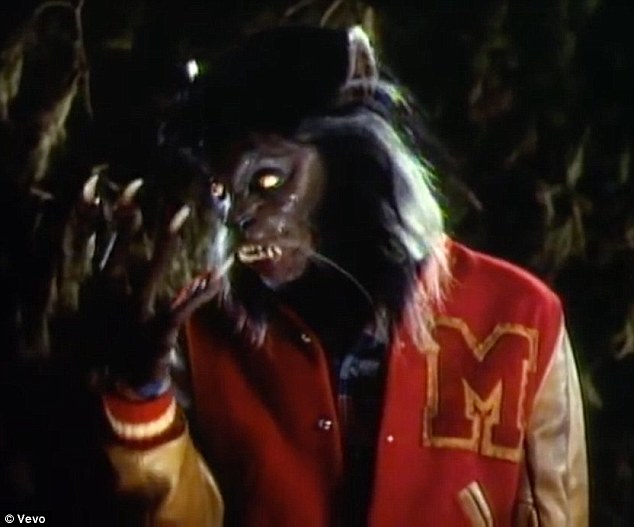 Creepy! Jackson famously turned into a werewolf and a zombie in the video 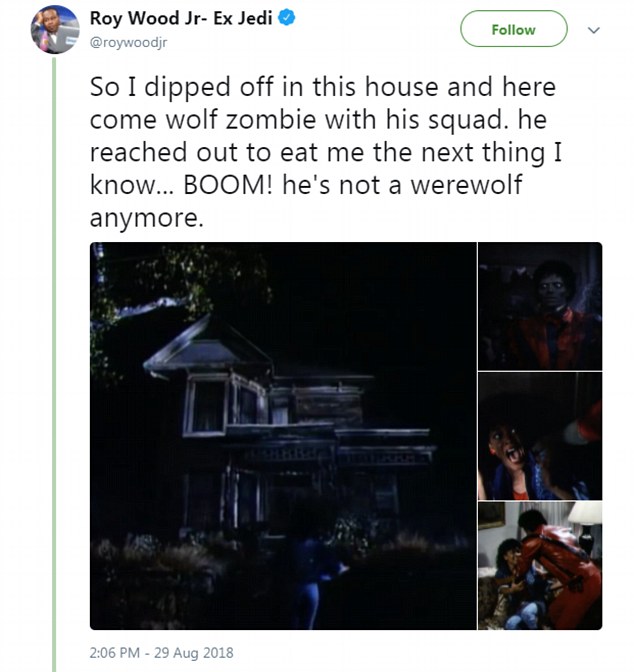 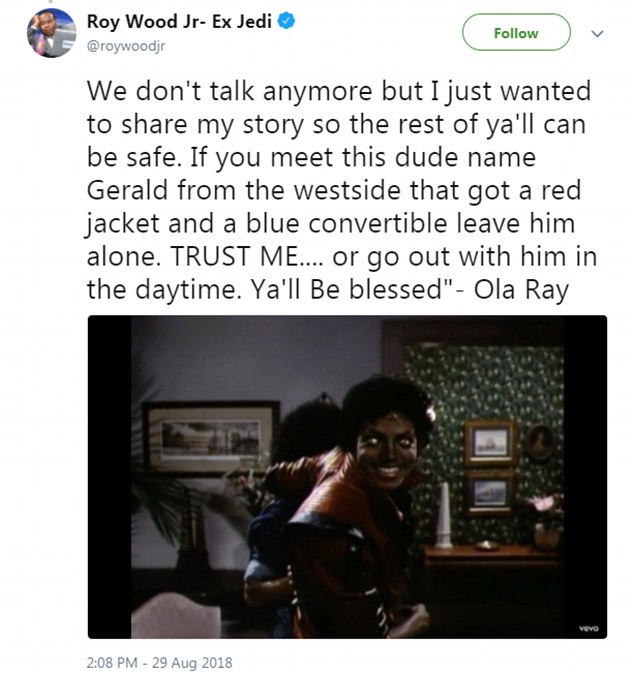 Stay away, ladies! She ends by warning not to go out with ‘Gerald’ from the ‘West Side’

‘Now they dancing. This mean he been having rehearsals! You ain’t got no time to get a job to gas up yo car but you got time to rehearse 8-counts with zombies?

‘Ya’ll I was done. Sad part is that one of the zombies trying to eat me was a black lady, so much for us sticking together.

‘So I dipped off in this house and here come wolf zombie with his squad. He reached out to eat me the next thing I know… BOOM! he’s not a werewolf anymore.

‘We don’t talk anymore but I just wanted to share my story so the rest of ya’ll can be safe. If you meet this dude name Gerald from the westside that got a red jacket and a blue convertible leave him alone.

‘TRUST ME…. or go out with him in the daytime. Ya’ll Be blessed”- Ola Ray’

In just a day, Wood’s hilarious thread has been liked 40,000 times and counting, and hundreds of admirers have commented to laugh at his story.