During Larry Nassar’s sexual abuse trial and sentencing, victims’ harrowing stories have brought to light Ehlers-Danlos Syndrome (EDS), a condition that is common among gymnasts, but poorly understood.

One gymnast, Melody Posthuma Banderbeen, claims that he told her she might have EDS because he was able to ‘put his whole hand’ inside of her, the Huffington Post reported in a tweet.

The revelation drove a surge in Google searches for EDS over the last month, as the public tried to understand what a connective tissue disorder that is common among gymnasts had to do with sexual abuse.

Here, we explain the hyperflexibility condition and why Nassar’s aggressive pelvic exam was not part of the diagnostic criteria for it.

Gymnast Melody Posthuma Banderbeen (center) testified against Dr Larry Nasser on Thrusday in Lansing Michigan. She told the Huffington Post the the physician claimed he could tell she had EDS by the elasticity of her vagina during an allegedly inappropriate pelvic exam

What can appear to be biological advantage also sometimes comes with fragile and unusually stretchy or skin.

As victim testimonies against Dr Larry Nassar continue this week,But, Lara Bloom, national executive director of the Ehlers-Danlos Society, said that although her tissue would be more ‘lax’ if Banderdeen had the disorder, ‘I don’t think it would be appropriate for someone to say that…it is not part of the diagnostic criteria.’

About one in every 5,000 people around the world has some form of EDS.

As these are genetically inherited conditions, gymnastics does not cause EDS, rather, people who excel in the sport like ‘naturals’ may in fact be more likely to have a mutation that makes them more flexible.

There are more than 10 types of EDS, which are loosely divided into two subgroups: classical EDS and hypermobility EDS.

The condition is mild in some – causing only slight looseness in the joints – while in others, weaker blood vessels can tear, leading to life-threatening internal bleeding.

EDS types all relate to collagen production and composition problems, though the particular issue varies widely.

When collagen is disrupted, the body’s many connective tissues – including cartilage, tendons, fat and bones – may falter and fail.

For example, those who can easily use one hand to pull the thumb of the other out and down so that it’s parallel to the wrist, likely have some form of hyperflexibility. 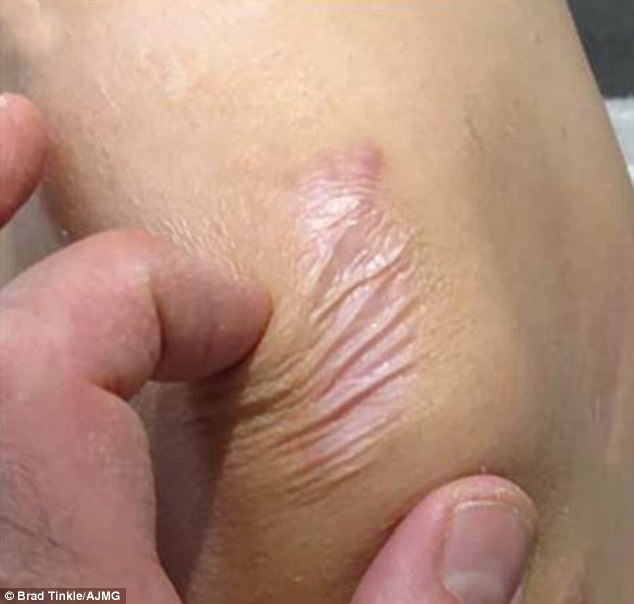 In some forms, corrupted collagen causes abnormal scarring, sometimes referred to as ‘cigarette-paper’ scarring, because the skin may look extremely thin and delicate, wrinkling or rippling like tissue paper.

Otherwise healthy, unscarred skin may also look and feel much softer or more velvety than the average person’s.

In addition to joints, skin and other soft tissues may be more flexible and stretchy in people with EDS.

Some studies have suggested that there may be links between dysfunctional pelvic floor muscles and EDS, but the condition is by no means diagnosable without genetic testing.

Dr Nassar’s alleged pelvic exam of gymnast Melody Posthuma Banderbeen, from Michigan, would not likely be relevant to diagnosing the disorder.

However, she and other gymnasts, researchers have reported, should be carefully screened for the disorder, as their flexibility could be a prominent symptom.

Without diagnosis through genetic testing, it is impossible to know which form – if any – these athletes might be suffering.

In the absence of preventative care, they could irreparably damage their joints, leading to permanent losses of mobility and chronic pain.