What is ghost broking and why do drivers need to beware the scam?

The majority of motorists are unaware of illegal ghost broking, despite more than 55,000 fraudulent motor insurance applications made in the last year.

The social media scam is on the rise, with more than twice as many cases reported in the past 12 months than previously detected – and experts are concerned it could become increasingly prevalent during the cost-of-living crunch.

Victims to these scams lose out on average almost £2,000 and could face criminal charges – and cases have more than doubled in the last year.

The Insurance Fraud Bureau (IFB) says ghost brokers are ‘rife on social media’, leaving victims penniless, without a vehicle and at risk of criminal charges as well as being a major cyber threat and costing the economy millions.

Ghost broking is on the rise. What is it? How does it work? And what are the implications of falling victim to the scam? We explain all

What is a ‘Ghost Broker’?

A ghost broker is a fraudster who pretends to be a genuine insurance broker, typically on social media platforms like TikTok, Facebook and Instagram, in order to sell fake car insurance.

Scam artists posing as brokers typically sell victims a policy at a dramatically reduced price, which is attractive to younger and new drivers who face the highest insurance prices.

The IFB’s latest investigation – which was conducted in partnership with insurers and UK police – discovered that over 55,000 fraudulent motor insurance applications have been made in the past 12 months.

Last year, insurers collectively reported more than 21,000 policies that could be connected to the scam, meaning cases are more than doubling each year.

Over £1billion in fraudulent insurance applications are detected each year, based on annual figures released by the Association of British Insurers (ABI).

How does ghost broking work?

Ghost brokers buy policies from legitimate insurance companies using false information, then doctor them before offering them on the cheap to customers.

It often involves forged insurance paperwork, but can commonly involve selling victims ‘real’ policies, but changing some key details, such as their address or claims record – ultimately invalidating the insurance.

The fake policy documents will be modified and forged to look like they have been issued by an insurer to dupe drivers into thinking they are genuine.

Anyone who falls for the scam will not be insured, and therefore face serious consequences. 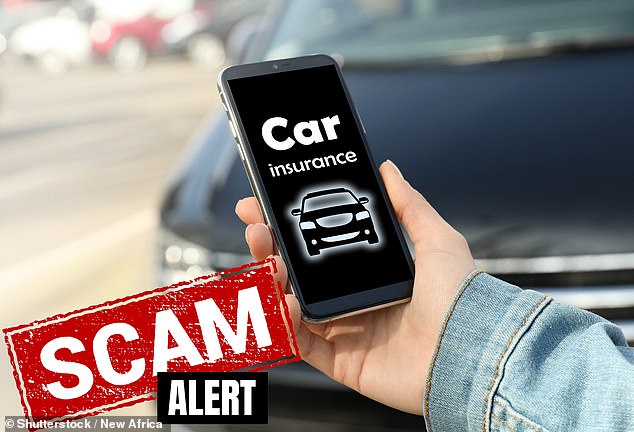 The Insurance Fraud Bureau’s latest investigation discovered that over 55,000 fraudulent motor insurance applications have been made by ghost brokers in the past 12 months

What can happen if you fall for a ghost broking scam?

The average ghost broking scam is said to have cost victims thousands of pounds in 2021, with the typical victim losing out on £1,950, according to a recent report by Which?.

Because drivers who fall for the scam are unwittingly not insured, they can face the same level of punishment as someone who actively drives without cover.

Driving without cover will land them with a minimum fixed penalty of £300 and six points, and can even result in court proceedings where unlimited fines and a driving ban can be issued, putting a criminal conviction on your record.

It can also result in your car being seized and even crushed by the police. To get the vehicle back you will need to pay a fee of at least £150 to have it released – and then have to fork out for valid insurance.

If you’re involved in an accident and you don’t have insurance, you could be liable to cover the full cost of any injuries or damage sustained by the other party.

Ghost brokers also pose a serious cyber threat as they steal personal information in order to take out policies under the names of individuals – such as experienced older drivers who usually have cheaper insurance – in order to forge and sell on policies in other people’s names. 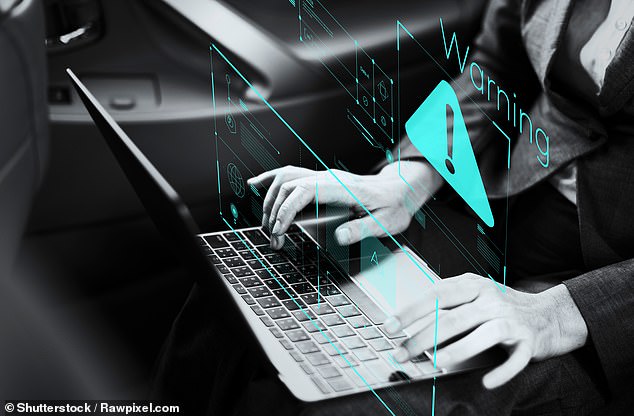 A ghost broker is a fraudster who pretends to be a genuine insurance broker, typically on social media platforms like TikTok, Facebook and Instagram, in order to sell fake cover

Cost-of-living crisis could spark a rise in ghost broking

With energy bills on the rise, food becoming more expensive and mortgage rates escalating, Britain is very much in the midst of a cost-of-living crisis.

And the IFB says this is a ripe time for ghost brokers to strike, as they target hard-up people looking to reduce their costs.

The bureau is especially concerned about the scam because very few people are aware that it even exists and could see more than four in five drivers falling for the false ads on social media.

Exclusive YouGov research commissioned by the IFB revealed that only one in six people (17 per cent) are currently aware of ghost broking scams, despite its prevalence on popular sites like Facebook and Instagram.

‘As the cost of living soars, there are concerns that the number of ghost broking victims will rise fast unless more is done to alert people to signs of the scam,’ the IFB warned.

In May, Which? searched on social media platforms for profiles and pages that showed signs of ghost brokers offering ‘cheap car insurance’ on Facebook, Instagram and TikTok.

Of the almost 50 profiles that matched Which?’s search on Instagram, more than half appeared to be offering quotes or cover to UK drivers, but showed no signs of being authorised by the Financial Conduct Authority.

One Instagram profile was also found boasting it could save customers ‘up to 50 per cent’ on their premium – it also offered ‘NCB (no-claims bonus) documents’ and ‘speeding ticket removal’.

It had 45,900 followers – more than the five biggest insurers combined – and claimed to have ‘over six years experience in [its] field’, and has since been taken down by Instagram after being flagged as a scam.

On Facebook, 14 per cent of profiles were dubious, while only four per cent were flagged as suspect on the video streaming platform, TikTok.

Over 500 cases of ghost broking – with losses totalling £1million – were reported to Action Fraud in 2021.

It today (3 October) launched an awareness campaign to educate young drivers who, according to its investigation, are most likely to fall victim to the scam to alert them on how to spot the signs of a fake motor insurance deal and how serious the consequences can be.

‘Not only do ghost brokers leave victims penniless, without a vehicle and at risk of criminal charges, but these fraudsters are a cyber threat and cost the economy millions.

Jallow commented: ‘In these hard economic times it’s crucial for drivers to spot the signs of ghost broking scams’ and added ‘anyone with evidence of an insurance scam to report it to us straight away’.

Detective Chief Inspector Tom Hill, at City of London Police’s Insurance Fraud Enforcement Department (IFED), said: ‘Whilst we continue to disrupt ghost brokers by cutting off their online resources, we urge the public to look out for the signs that point to a fraudulent policy.

‘A cheap offer may be more enticing now than ever as we head into a tough economic climate, but a bogus policy will end up costing you far more in the long run.

‘Not only do social media platforms give fraudsters a front to hide behind, but they also provide a huge audience of potential victims to target.

‘Over the past year, every report of Ghost Broking to Action Fraud has been cyber-enabled, proving that it really is important to be wary of too-good-to-be-true deals online. These reports have amounted to £1.5 million worth of losses.

‘We hope that this campaign will remind people to complete the relevant checks before parting with their hard-earned money.’

How to spot signs of a ghost broking scam

Ghost brokers tend to offer up-front fixed prices without any form of assessment, even though motor insurance is priced based on the risk of the information provided by the policyholder.

However, in a bid to appear more genuine, other scammers will carry out mock quotes to make victims believe the insurance deal is being tailored to them, but the price offered will still be unrealistically cheap.

Another sign of ghost broking is pressuring potential victims to communicate with the fraudsters via end-to-end encrypted messaging apps like WhatsApp. This is to keep illegal dealings in private.

They may also boast that the insurance policy is legitimate because it appears on the Motor Insurance Database (MID), whilst in reality this is only because they have taken out a policy using false information which makes it entirely invalid.

How can I check for a ghost broker? 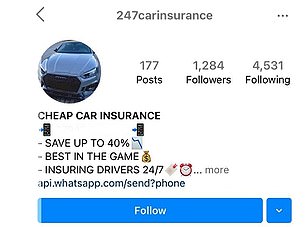 The IFB says there are checks motorists can carry out to see if an online broker is genuine or not. This means searching for them on a number of different member databases:

• All genuine insurance brokers are registered with the British Insurance Brokers’ Association (BIBA).

• Insurance advisors are registered with the Financial Conduct Authority (FCA).

• Motor insurers are members of the Motor Insurers’ Bureau (MIB).

Why are social media platforms not stopping ghost brokers?

As part of a Which? investigation into ghost broking earlier this year, it tested how social media platforms are vetting unregulated insurance middlemen by setting up six accounts on TikTok, Facebook and Instagram under the premise that they were car insurance brokers.

The two profiles on Facebook were taken down by the site within a few days, as was one Instagram profile linked to an email containing the word ‘ghostbrokerscammer’.

However, the second Instagram profile, stayed up for 35 days, as did the two TikTok profiles, before Which? removed them.

Experts are arguing for social media companies to have stronger processes in place to protect consumers from fraudulent pages offering financial services, suggesting platforms should be required to prevent this kind of activity.

Jenny Ross, editor of Which? Money, called on the Government to amend the Online Safety Bill to ensure its definition of fraud does not allow scammers to slip through the net.

She said: ‘Ghost broking is a really nasty kind of fraud, where scammers operate by stealth and typically take advantage of those who feel locked out of, or bewildered by, the car insurance market.

‘Social media sites must do much more to crack down on car insurance scammers that are infiltrating their sites and harming consumers, and should address these problems now, ahead of the Online Safety Bill becoming law.

‘The Online Safety Bill should require platforms to tackle this type of fraudulent content.

‘The Government must ensure this happens by amending the Bill so that its definition of fraud does not allow some scammers to slip through the net and guaranteeing Ofcom is ready to enforce these new laws when they come into force.’

A TikTok spokesperson responded to the Which? investigation. They said: ‘Our Community Guidelines make clear that we do not tolerate any kind of fraud or scams on TikTok and we will continue to take an aggressive approach to removing this kind of content.’

How to report insurance fraud

Anyone who thinks they have evidence of an insurance scam such as ghost broking, can report this confidentially to the insurance industry via IFB’s Cheatline online or via its phoneline (powered by CrimeStoppers) at 0800 422 0421.

Ghost Broking can also be reported to the police via Action Fraud.