What is Jaja? New mobile-only credit card to launch next month

New credit card to launch called Jaja offering fee-free spending abroad and customer approval in under three minutes – is it any good?

More than 6,000 people have joined the waiting list for a ‘mobile-first’ credit card that promises to approve customers in less than three minutes.

Jaja, a fintech set up by three Norwegian entrepreneurs and run by the ex-managing director of Barclaycard in Western Europe, describes itself as a rival to digital challenger Tandem and says its first credit card will launch next month.

The company bills the product as mobile-first, explaining it allows customers to set up an account, secure credit and make a purchase before their plastic arrives.

It says that there are ‘no complicated forms to fill in and new customers will be up and running within minutes’ with only a driving licence or passport, but said it still does carry out credit checks and not all applications are approved.

Concerns have been raised about the level of UK credit card debt, with around £67billion currently outstanding.

Jaja announced the launch of its Visa credit card last September and the waiting list to sign up alongside it, but said in November 2018 its roll-out would be slightly delayed.

It said it is currently running private testing with those at the top of its waiting list and plans to launch the full app and credit card next month.

The first 5,000 people who signed up to its waiting list were offered cashback with the likes of Uber, Deliveroo, Spotify and Booking.com. 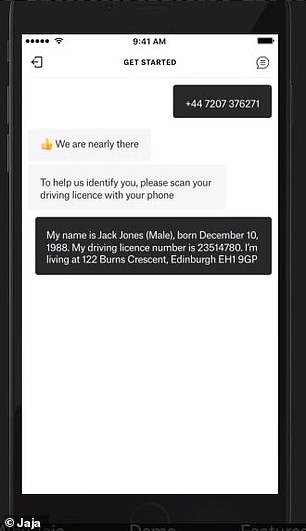 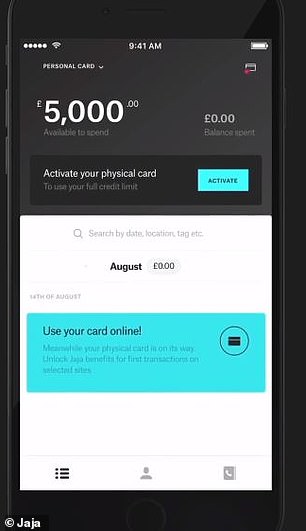 It also now offers a separate credit card designed for those with a limited credit history.

Tandem regained its banking licence in September 2017 after it bought the banking arm of Knightsbridge department store Harrods, which had previously been around since 1893.

The challenger had previously lost its licence in that March after previous House of Fraser owner China Sanpower Group scrapped plans to fund it.

According to Forbes, Tandem had 100,000 customers as of last October, meaning Jaja has around 6 per cent as many customers as its rival one month away from launching its card.

Jaja’s product comes with an APR of 18.9 per cent and offers fee-free spending abroad, but does not offer cashback on purchases.

It is yet to secure a banking licence, but is authorised by the Financial Conduct Authority and can issue credit cards and enter into regulated credit agreements. It is also licensed by the FCA to provide payment services.

CMO and co-founder of Jaja Finance, Kyrre Riksen, said: ‘We were blown away by all the positive feedback from online forums – we’ve had literally hundreds of comments from people wanting to see more innovation in this space.

‘It seems people have generally been fairly unimpressed by new credit card offerings and are keen for a beautifully simple and easy-to-use product that helps them take control of their finances.’

What does Jaja stand for?

There isn’t a clear indication as to what the name stands for, although in Spanish, Jaja is roughly the equivalent of ‘Lol’ – short for laugh out loud.

In its blurb, it says: ‘In Oslo, Norway, you’re welcomed by a living wall that just says: “That is a beautiful moment of simplicity, but leaves you wondering, why is everything so complicated” – this is synonymous with Jaja – it aims to be brilliantly simple, driving beautiful customer experiences.

‘This is the Norwegian way to simplify life. Jaja have wrapped this up in a digital credit card.’