What is the trend of remittance to Pakistan – 2021 Guide? 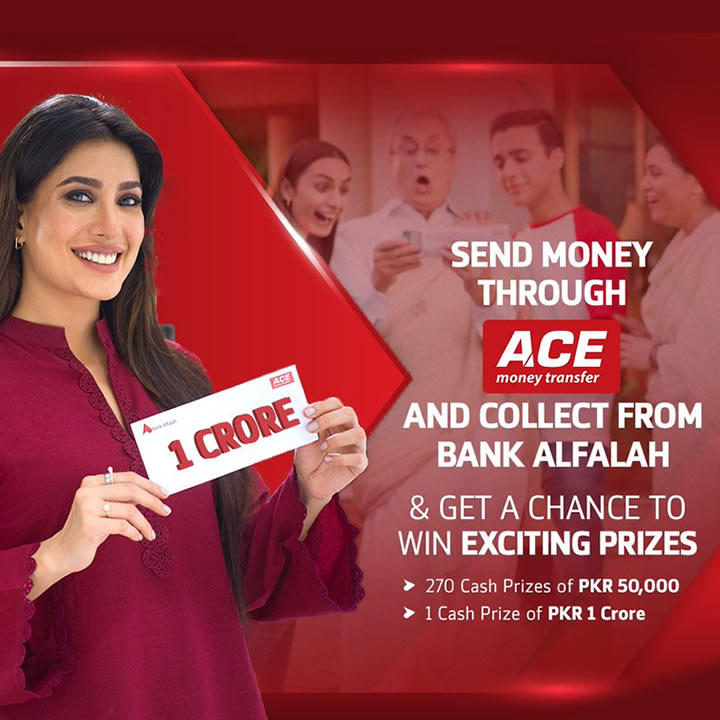 Pakistan is a country in South Asia. It has a population of 202,935,742 people and covers an area of 350,590 sq km. The capital of Pakistan is Islamabad and its official languages are English and Urdu. In 2017 Pakistan ranked 145 out of 190 countries on the Human Development Index (HDI).

Pakistan’s remittance inflow from overseas workers was $10 billion in 2011 which increased to $13 billion in 2014; this figure represents about 3% of gross domestic product (GDP) and suggests that foreign remittances play an important role in the economy.

If you are an overseas resident and looking for the best way to send money to Pakistan daily, weekly, or monthly basis. Now you can avail an exciting opportunity to win one crore rupees by sending money to your loved ones in Pakistan.

In the following guide, we will share details on the ongoing remittance trends in Pakistan. In addition to that, we will also let you in on steps as to how you can qualify for the daily and bumper prize of ACE & BAFL offer.

Overall Trend of Remittance to Pakistan in 2021?

Workers’ remittances resumed their strong trend in September, with inflows of $2.7 billion, according to the State Bank of Pakistan (SBP). They have been over $2 billion since June 2020. In the third quarter of 2021, remittances to Pakistan grew to 8,035 USD million, up from 7,957 USD million in the second quarter.

Guest workers in the United Arab Emirates sent $1.54 billion to homelands during the quarter under review, up 8.7% from $1.42 billion in the same quarter the following year.

As per the monetary authority, Pakistanis based in Saudi Arabia sent the most remittances in July-September 2021, totaling $2.02 billion, which was 2percentage points less than the $2.08 billion received in the same period the previous year.

Millions of overseas Pakistani expats send remittances to Pakistan from around the world. But how about getting a chance to win an extra reward for your money transfer transactions?

ACE & BAFL now announces an astounding offer of daily three cash prizes of 50,000 PKR and a bumper prize of one crore Pakistani rupees. How is that for an offer!

Let’s get to the bottom of it: how you can become eligible for such an attractive offer.

How can you become eligible for the ACE & BAFL offer?

You must be thinking by now, how can you stand a chance to win through such a tremendous offer? Don’t worry; we will explain the process of becoming eligible for the chance to win big with the ACE & BAFL offer.

However, the transactions must be sent across ACE Money Transfer’s channel and received via Bank Alfalah account or cash pickup.

All the paid transactions will be qualified for making their way into the lucky draw participation. There is no limit on the money transfer transactions, so make as many transactions as you can. As this directly will increase your chances of winnings.

For all the money transfer transactions to Pakistan using ACE & BAFL, the lucky draws will be hosted once a week. In the lucky draw, winners will be announced from the previous week. ACE Money Transfer will contact the winners of cash prizes through direct email or call.

It is advised to consider only calls and emails from the official ACE network for the lucky winners. Transfer money to Pakistan today and get a chance to become part of the ACE & BAFL offer.

How can winners receive the cash prizes?

The lucky winners of the ACE & BAFL offer will receive the cash prizes every week in the form of a cross cheque or a bank draft. The lucky draw ceremonies will be held in the branches of Bank Alfalah.

The prizes will be only given to the receiving parties of the remittances. ACE & BAFL also allows crediting the lucky draw prize to the winner’s bank account.

The grand bumper prize of ACE & BAFL offer will be given to the lucky winner during the Grand Ceremony. The Grand Ceremony will take place in January 2022. The remitter can decide for any person of their choice in Pakistan to receive the bumper cash prize.

So, what are you waiting for? Transfer money to Pakistan with the world’s best offer and win huge, exciting cash prizes.

ACE Money Transfer & Bank Alfalah are both high-profile financial institutions registered under the financial regulatory authorities in Pakistan. Therefore, all the processes and business functions, including money transfer to Pakistan, are subject to the compliance policies under the concerned monitoring authorities.

Therefore, all the prizes and winnings are subject to tax implications as per the local laws of Pakistan. The winners will be mainly responsible for any personal advance or withholding implied as a result of winning from the ACE & BAFL offer.

ACE Money Transfer and Bank Alfalah is not liable for any tax payments incurred because of winnings.

The dates for the lucky draw are subject to change at the discretion of ACE Money Transfer & Bank Alfalah. The company reserves the right to utilize winner information for any promotional and marketing concerns.

Transfer money to Pakistan today and get one step closer to such a remarkable chance of winnings!

The trend of remittance to Pakistan is on the rise. The country has seen a steady increase in its inflow from overseas workers since 2011, which suggests that foreign remittances play an important role in the economy.