What Kate Middleton and Meghan Markle think of each other

Ms. Markle could have been forgiven for feeling nervous as she took her seat alongside the Duchess of Cambridge today for their first joint engagement.

But according to body language analysts, far from being a shrinking violet, Meghan came across as an ‘unstoppable force of nature’ determined to get her point across – even if it meant talking over her future sister-in-law at times – during a Royal Foundation Q&A in the City of London.

MailOnline FEMAIL spoke to bestselling author Judi James and communications coach Robin Kermode to find out what Kate and Meghan’s body language reveals about their relationship – with Judi noting that the Duchess appeared anxious on behalf of the ‘new kid on the block’ as she makes her first tentative steps into royal life.

Judi said: ‘The dynamics between Meghan and Kate threw up some fascinating body language that could even suggest or hint at some future friendly clashes between two strong women.

‘The pair seemed to skip any sister-in-law style tie-signs or exchanged smiles and chat. Their chairs had been placed close on stage, and there was some superficial mirroring, but they rarely met eye contact.

‘Meghan in particular seemed all about getting her passionate messages across.’

During their first joint engagement this morning, Meghan Markle came across as an ‘unstoppable force of nature’ determined to get her points across – even if it meant speaking over Kate, whose body language appeared more restrained

Judi added: ‘Kate’s body language style looks calm but firm and she sat back in her chair (possibly the baby bump modified her posture) while Meghan sat upright and slightly forward.

‘Kate’s hands tended to remain folded in her lap with just some increased anxiety finger-fiddling signals when both her husband and Meghan spoke.

‘Her eye contact and smiles tended to be reserved for William which suggests low levels of anxiety on behalf of Meghan who was the new kid on the block but clearly full of eloquent confidence.

‘Meghan’s style of communication is emotional and forceful. Putting her passion for the causes across she looks like a force of nature that might take some stopping. When the subject of “disagreements” between them came up there were some interesting “tells” in terms of body language.

‘Both women used their hair as a cut-off, hiding their faces and therefore their true emotions. William sank in his seat saying ‘oh yes’ and Meghan grabbed Harry’s arm in what looked like a gesture of restraint and support.

‘The words ‘stuck together’ were used and although the mood was light enough it was an interesting moment that might suggest there has been some lively debate between the couples.’ 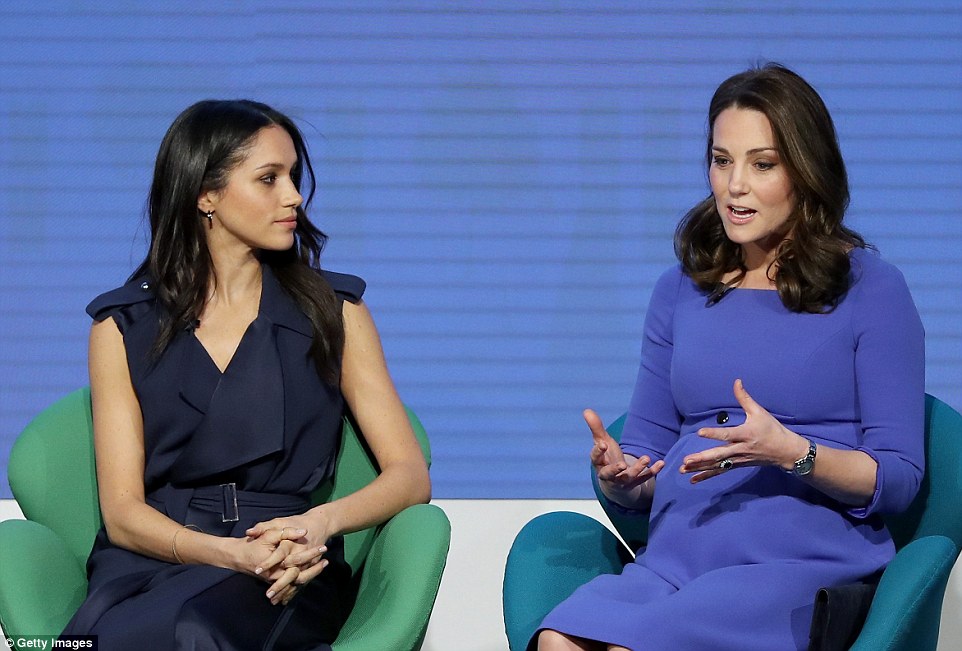 Our body language analysts noted that Meghan’s upright posture this morning signalled ‘confidence and even leadership’. The pair joined forces for the first time to launch the Royal Foundation Forum at the Aviva offices in the City of London 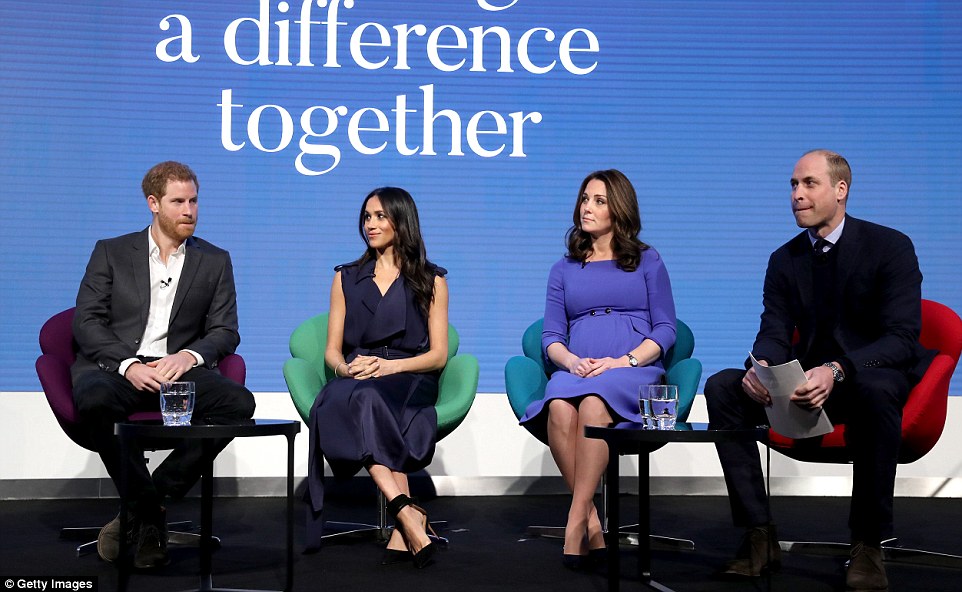 After analysing photographs of the pair together this morning, body language expert Judi James said: ‘Kate’s pose shows her royal experience. She sits back in her chair in a less active and more relaxed style (given the baby bump will play a part)’ 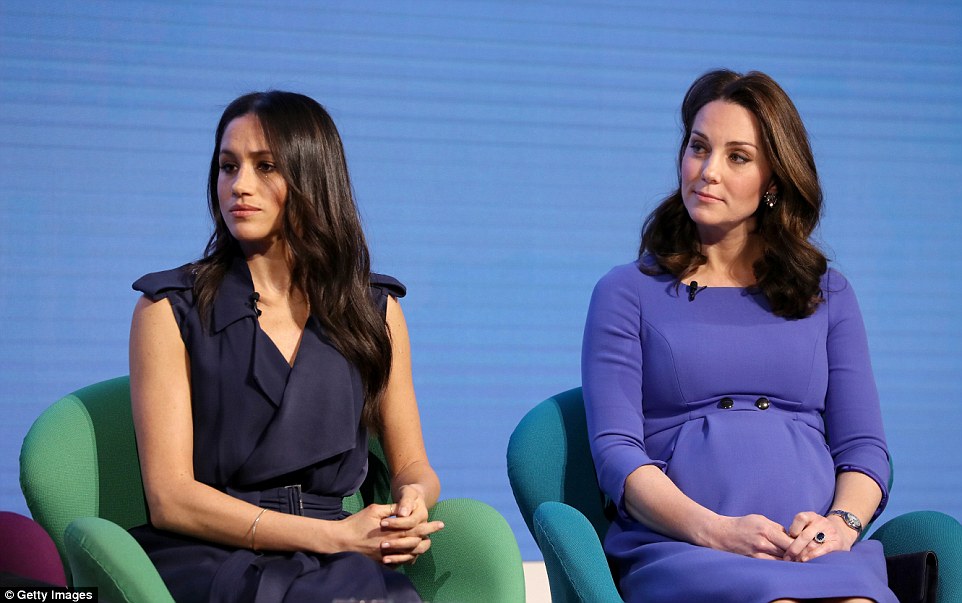 Communications coach Robin Kermode said of Kate: ‘Her slightly tilted head to her left shows he is not playing high status above Meghan. Kate appears to be slightly fiddling with the end of her left finger, which is a comforting gesture – indicating that she is now so comfortable with being in front of the media that she doesn’t feel she has to be “on show” at all times’

‘Meghan’s trait of sitting upright in her chair suggests dynamic energy and desire to speak and participate,’ notes Judi. ‘Her elbow on the chair is a partial pit-bare gesture that suggests confidence and even leadership.

‘Kate’s pose shows her royal experience. She sits back in her chair in a less active and more relaxed style (given the baby bump will play a part).

‘She has learned that – as a royal – your voice gets heard and there is no need to actively court attention. Her approach looks calmer and her calm confidence is in contrast to Meghan’s more active confidence.

Meghan’s chin is low, showing she is confident of her status

Robin agrees that the former actress is something of a natural in front of the camera, adding: ‘Meghan appears very relaxed, with lightly clasped hands. Her chin is low, showing she is confident of her status, with a relaxed hint of a smile.

‘Her raised eye brows shows she is listening carefully. She shows the open, calm posture of someone who is used to, and likes, being filmed.’

‘Kate, too, looks relaxed in Meghan’s company,’ Robin adds. ‘Her slightly tilted head to her left shows he is not playing high status above Meghan. Kate appears to be slightly fiddling with the end of her left finger, which is a comforting gesture – indicating that she is now so comfortable with being in front of the media that she doesn’t feel she has to be “on show” at all times.

‘They appear to talking genuinely with good eye contact and a perfectly mirrored raise of their eyebrows.’ 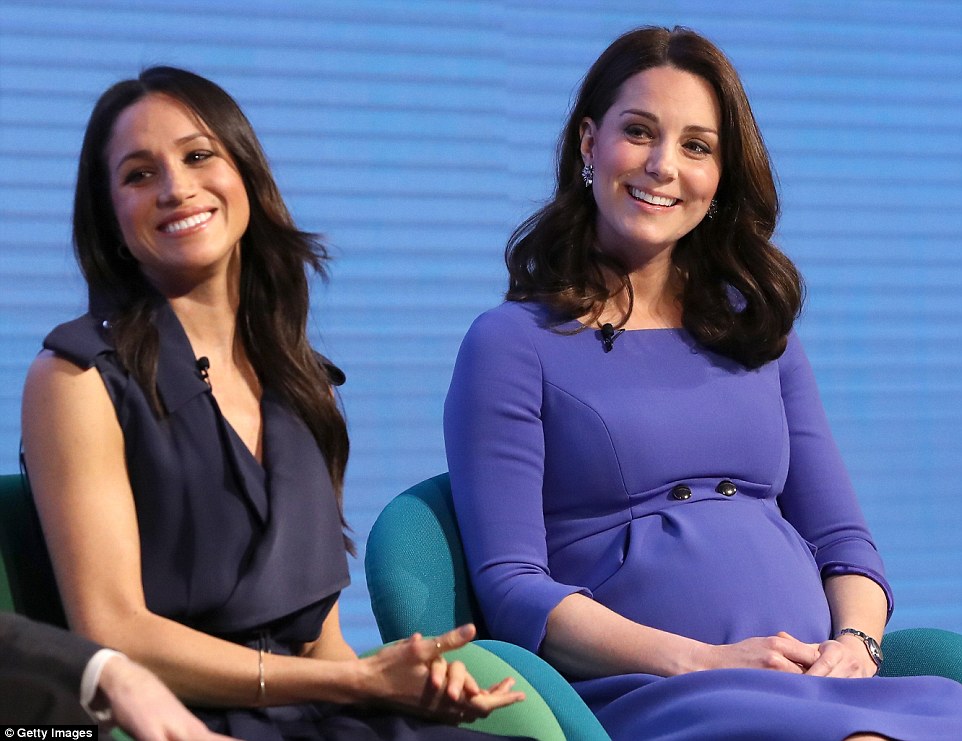 Kate and royal-in-waiting Meghan both broke into a grin when Harry made a joke – but Meghan’s was more ‘relaxed and flirty’ according to Judi. While Robin notes the two women both ‘lean their heads towards their respective husbands’ 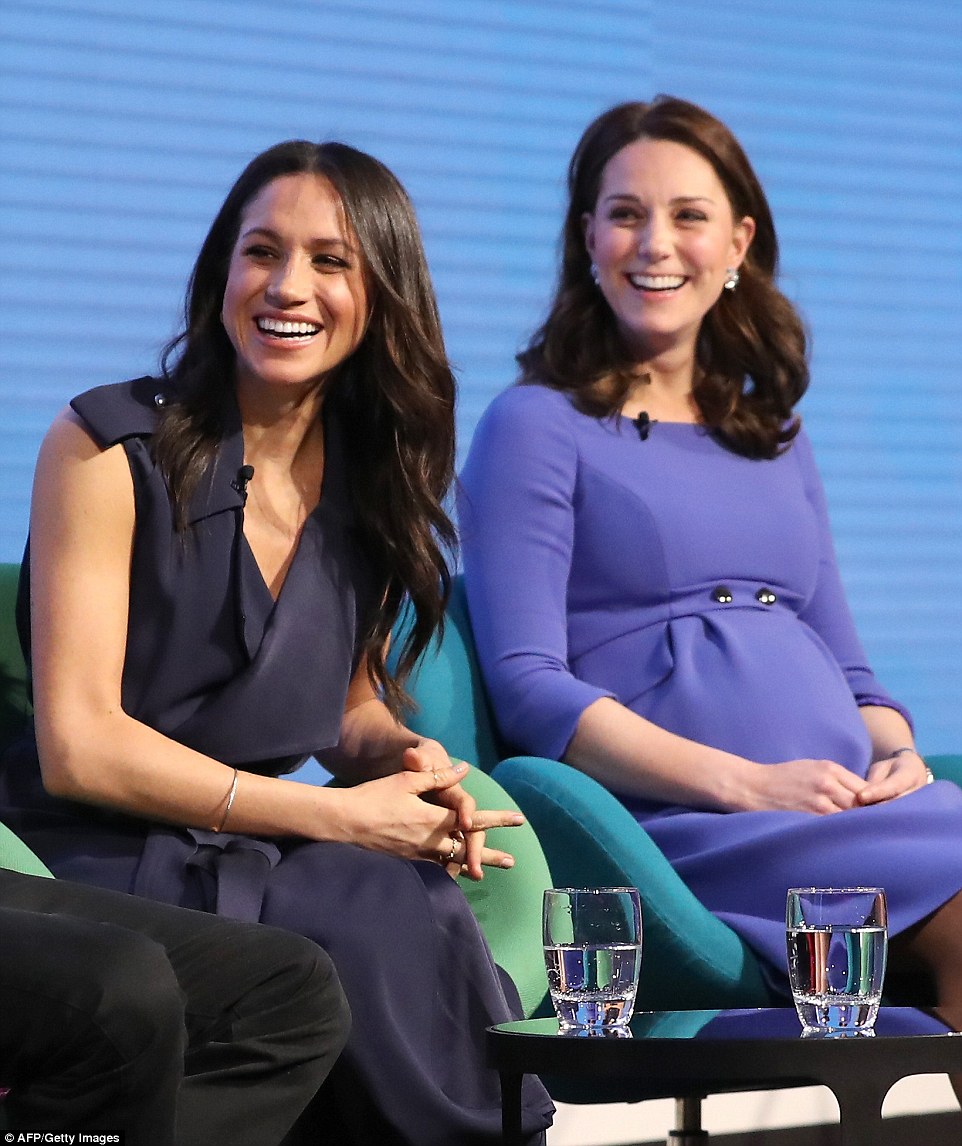 It was also noted by our experts that the two women were holding their hands differently. Judi James commented: ‘Meghan used a meshed-finger clasp and here she holds her hands in a “clapping” clasp. She uses strongly emphatic hand gestures’ 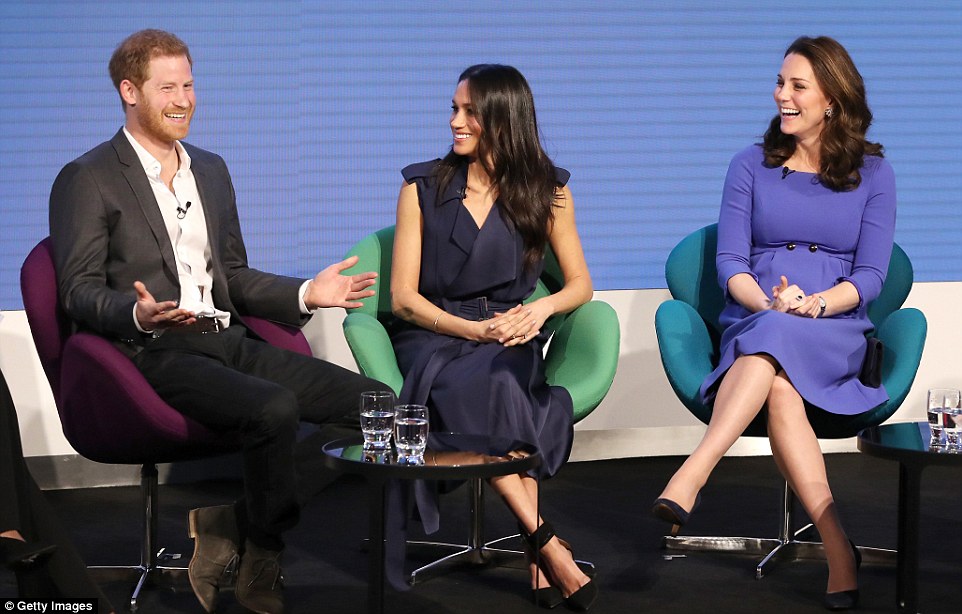 Meghan’s ‘clasping’ gesture is ‘full of energy’ according to Judi, who adds: ‘Kate’s hand clasp is slightly more regal but notably there was quite a bit of finger-fiddling too, suggesting some anxiety’

Judi says: ‘Kate’s smile is her signature ‘perfect’ royal smile but Meghan’s is more actively fun and even flirty as she looks towards her prince.

‘The hand clasps are also different: Meghan used a meshed-finger clasp and here she holds her hands in a “clapping” clasp. She uses strongly emphatic hand gestures as she speaks and this “clasping” is still full of energy. Kate’s hand clasp is slightly more regal but notably there was quite a bit of finger-fiddling too, suggesting some anxiety.’

Robin notes: ‘A genuinely relaxed smile from both women. Interestingly, both their heads lean towards their respective husbands just out of shot.

‘Meghan throws her head back further than Kate, but then it is her fiancé making her laugh!

3. A ‘cut-off gesture’ to hide their giggles 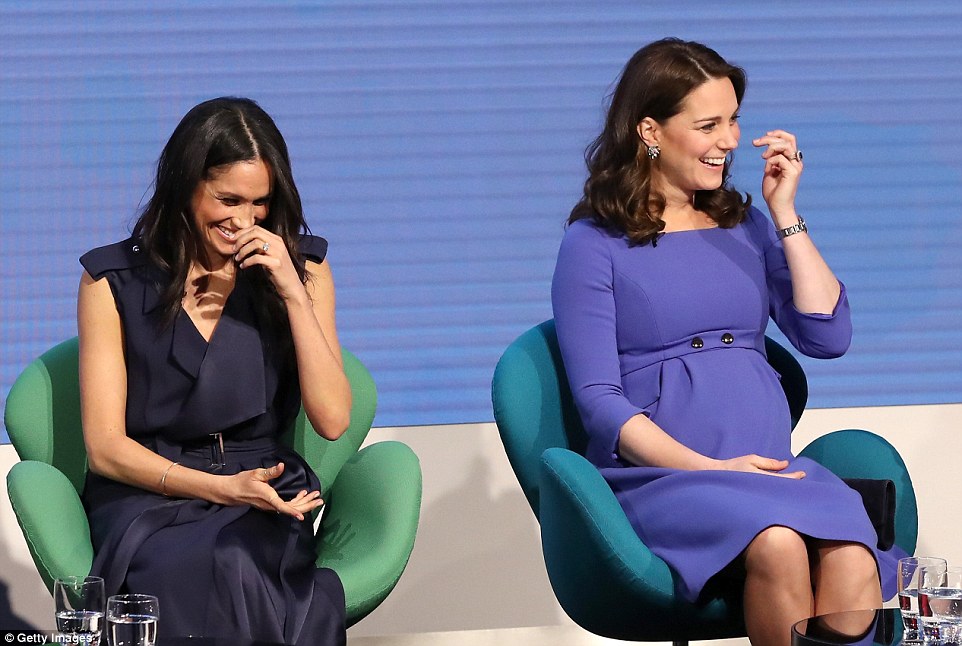 The ladies break into fits of giggles during the Q&A this morning – and both seemed relieved that it was Harry rather than them in the spotlight, according to communications coach Robin Kermode 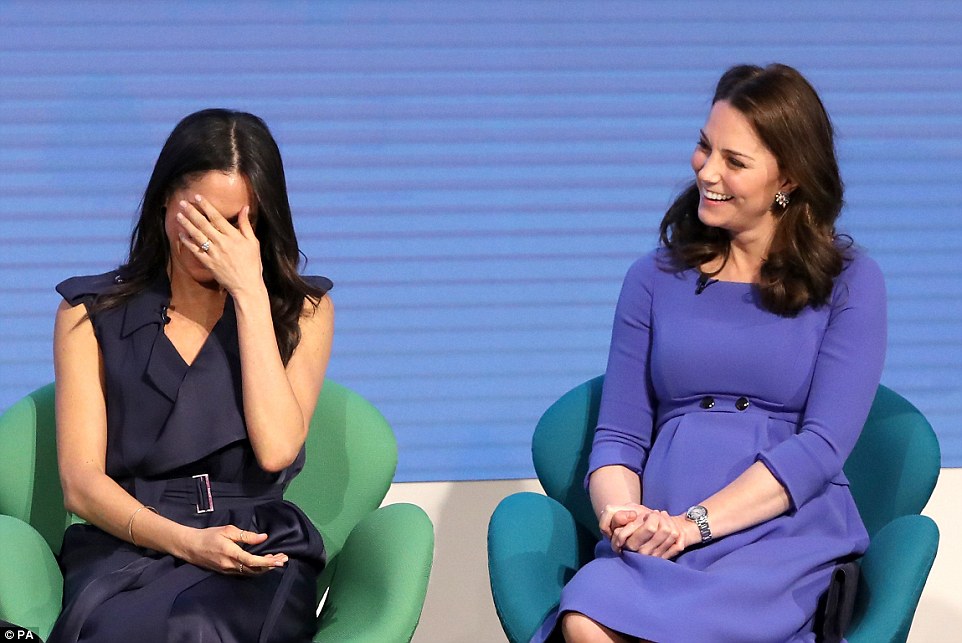 Meghan could be seen covering her face with her left hand as she laughed at something her fiancé had said during their panel discussion this morning.

‘Harry’s humour seems to affect both women in a similar way, with both hands being raised in a partial cut-off gesture to hide their giggles,’ notes Judi.

Robin agrees, adding: ‘Both using their left hand (the emotional hand) gesture to cover their mouths as if to say, “That was very funny, but I’m glad you said it rather than me!”‘

Harry is known as the joker of the Royal family, and his winning sense of humour is believed to be one of the things that first attracted his former actress fiancée to him. 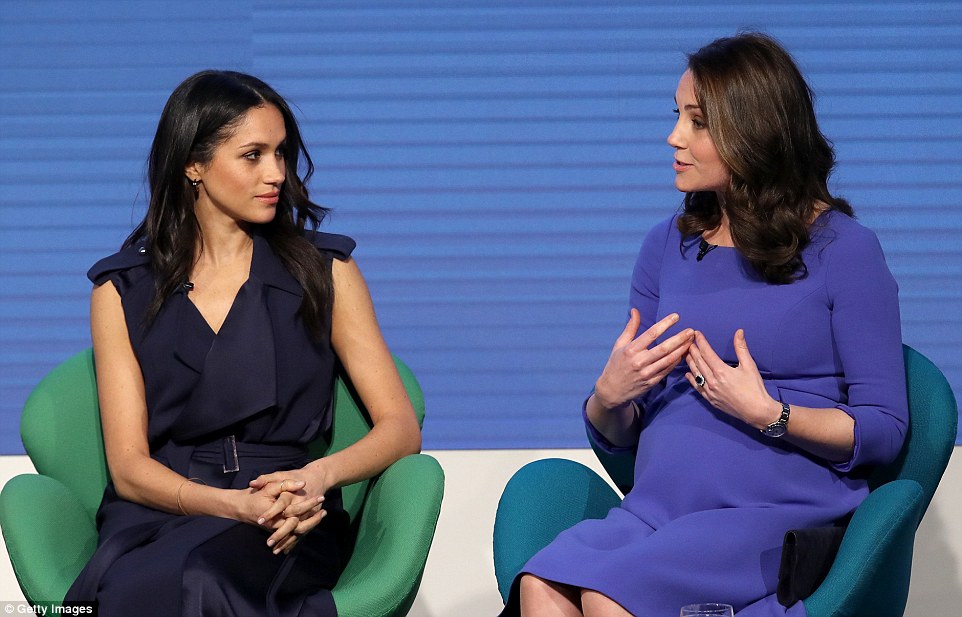 Kate had a lot to say on the subject of mental health – and while Meghan is often ‘unstoppable’ when it came to getting her point across, she listened ‘respectfully’ when the Duchess was speaking  – although the pair didn’t make eye contact 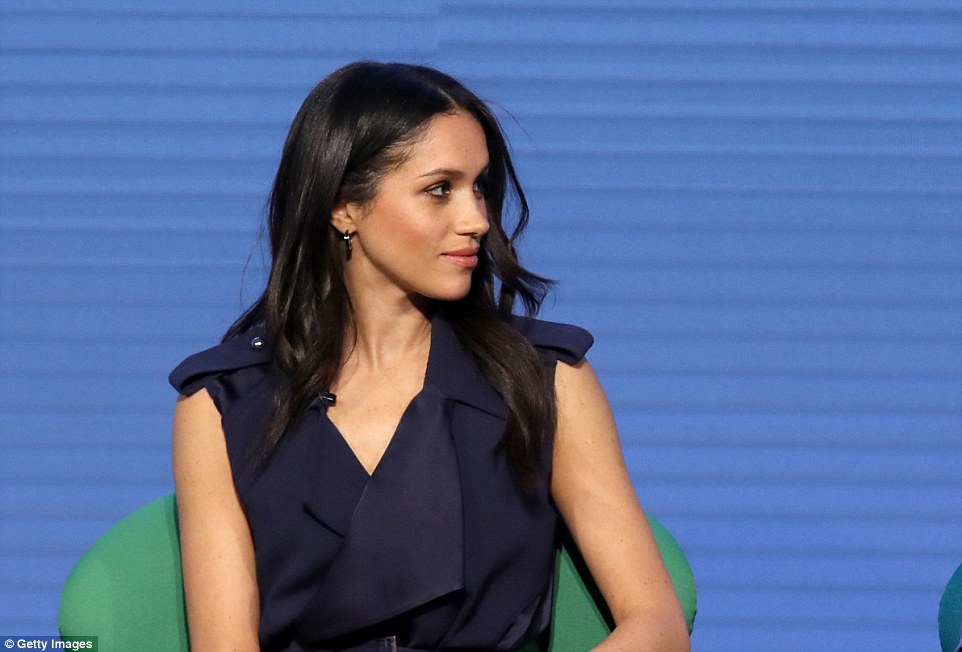 Meghan was visibly engaged and composed as she listened to the Duchess speak on a range of topics. Robin Kermode notes: ‘Meghan doesn’t appear to be about to interrupt or add, but listens intensely, showing respect for Kate’

‘Meghan’s more serious listening face when Kate was talking signalled respect for her message,’ notes Judi, adding: ‘Although there was little mirroring here, suggesting two women with quite different approaches and communication styles.’

Robin agrees, adding: ‘Meghan doesn’t appear to be about to interrupt or add, but listens intensely, showing respect for Kate.’

William, Kate, Harry and Meghan appeared on stage together this morning to discuss why The Royal Foundation was set up, the projects they are currently working on, and their ambitions for the future, as well as meeting with other forum attendees.

The Royal Foundation’s programmes to date include Heads Together, the Invictus Games, United for Wildlife, Coach Core and the Endeavour Fund.

Robin Kermode is one of Europe’s leading communication coaches working with C-suite leaders and founder of Zone2 coaching consultancy: www.zone2.co.uk

Judi James is the bestselling author of The Body Language Bible